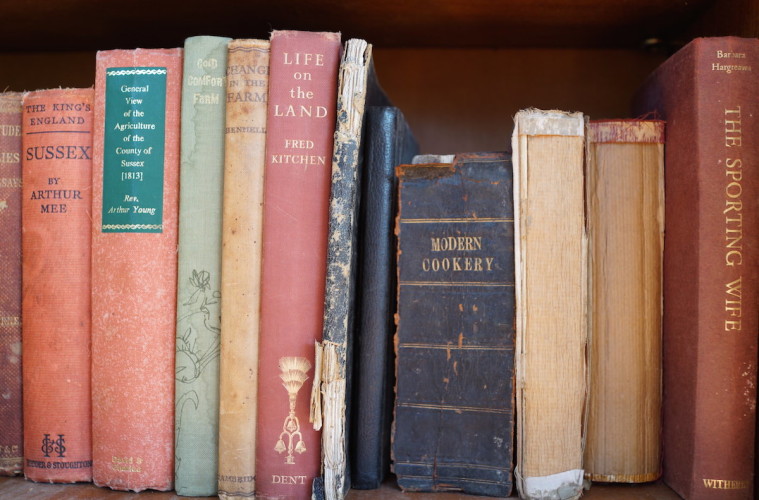 In recent years celebrity chefs like Hugh Fearnley-Whittingstall have encouraged the public to embrace ‘nose-to-tail’ eating, using every part of an animal including the lesser known and harder to cook cuts, and also the offal – the liver, kidneys, heart etc. Their reasoning is twofold; the first is an ethical point, that if an animal has been killed to supply us with meat, we should not waste any part of that animal. 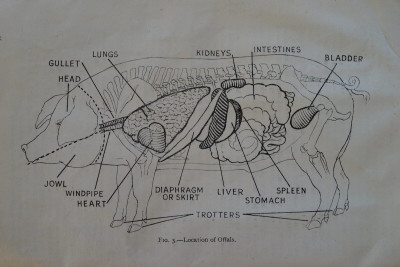 The second point is a gastronomic one, that some of these cuts have deeper, richer flavours, or more interesting and varied textures than you get with a standard chicken breast or pork chop. Also, the less popular parts of an animal are cheaper than the prime cuts, so it is well worth finding a good butcher, buying something unusual and trying out a new recipe.

Of course, this type of cookery is nothing new. Talk to anyone born before 1960, or read a recipe book published before that date, and you will find that eating heart, tongue, tripe, pigs trotters and many other animal parts was commonplace in both rural and urban districts. People had a closer connection to animals and to the land, money was tight for many people, and they were not squeamish about what they ate. I have a small collection of recipe books from the early 20th Century that contain some truly fearsome recipes that illustrate what people were prepared to eat in those days.

From ‘The Sportsman’s Cookery Book’ (by Major Hugh Pollard, published 1926), here is a recipe for Hare Omelette:

Simple, and possibly delicious, I have not tried this yet but Im sure it would make a mighty breakfast.

If Hare Omelette isn’t your thing, how about some Muggety Pie, from ‘Cornish Recipes’ (The Cornwall Federation of Women’s Institutes, 1929):

‘Take the long cord of a calf [the umbilical cord], clean, soak in salt water, boil for a few minutes then cut into short lengths and place in a pie dish with plenty of onions, pepper and salt. Cover with pastry and bake.’ An umbilical cord pie really is taking ‘nose-to-tail eating’ to extremes, and you would get a very funny reputation if you went and asked for one of those at your local butcher. The same book supplies many recipes that sound pretty weird to modern tastes, including squab pie, a squab being a baby pigeon. 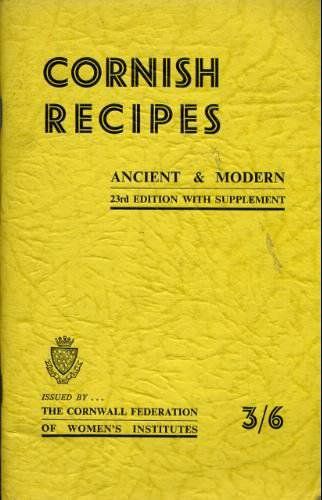 Looking at old cookbooks can be a really interesting way of understanding our ancestor’s relationships with food and farming. With no supermarkets and no pre-packaging, people were not as far removed from the processes of raising, slaughtering and butchering animals as we are now. And with many families hovering at or below the poverty line, people simply could not be so choosy about which animals, or parts of animals, they ate. Cooks displayed great ingenuity in making delicious and nourishing meals from all parts of an animal. 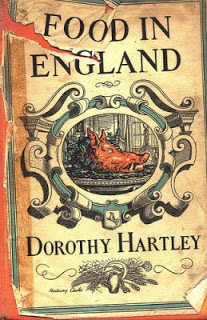 A quick browse through Dorothy Hartley’s magnificent tome ‘Food in England’ (1954) reveals hundreds of unlikely recipes, including Ox head, Ox Pith (the marrow of the spinal cord) and a gelatinous broth from Gloucestershire made from Ox palate, and those are all from just one page!

Some recipes were given very evocative names. Robin Howe, in ‘Cooking from the Commonwealth’ (1958), supplies a recipe from the west of England called ‘Love in Disguise’, which is essentially a calf’s heart stuffed with veal, wrapped in bacon, coated in breadcrumbs and baked. A good recipe for valentine’s day perhaps? There is also the wonderfully named ‘Stargazey Pie’ from Cornwall, which consists of Pilchards baked in a pie with their heads poking up above the pastry as if they are gazing up at the stars, the idea being that as the pie bakes the rich juices from the fish heads run down and enrich the pastry. 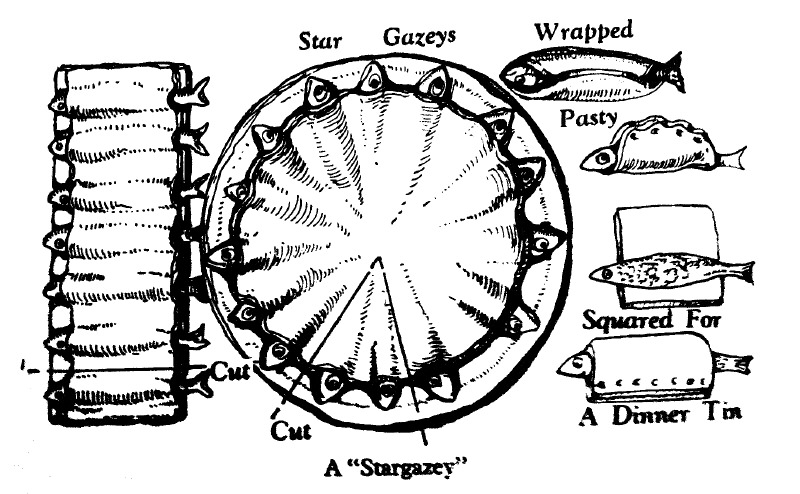 It wasn’t just the meat recipes that contained surprising ingredients. Dorothy Hartley states that Ash Keys (the small winged seeds of the Common Ash tree) were eaten pickled, and the leaves of the Small-leaved Lime tree were eaten as a salad leaf. ‘Beestin’ was an unusual delicacy known throughout the country, a rich custard made from the first milk of the cow after calving, a golden yellow, thick, nourishing and apparently delicious dish.

If you are actually brave enough to try any of these recipes, you will need something to wash it down. Maybe you could try a glass of ‘Mahogany’, as detailed in ‘Cornish Recipes’, a drink of two parts gin to one part treacle, well beaten together. In the name of research, I have tried this, and found it to be just as you would imagine, a sweet black treacly, toffee spirit with an alcohol punch and a hint of aniseed. If that sounds too tame, you could try some ‘Cock Ale’, an Oxfordshire recipe from 1780 described by Hartley:

‘Take 10 gallons of Ale, a large Cockerel (the older the better), slay, caw and gut him, and stamp him in a stone mortar. Add spice and put all into a canvas bag, lower him into the ale while still working [fermenting], finish working and bottle.’ If any home brewers are reading this and decide to give it a go, please tell me what it tastes like, I am intrigued and repelled by this recipe in equal measure!

And if all this delicious food and drink takes its toll on your body and you pile on the pounds, forget the Paleo or the 5:2 or whatever else is the latest diet and take this advice from the Cornish Women’s Institute diet of 1929:

‘To reduce corpulence use a vegetable diet. Breakfast and sup on milk and water (with bread) and dine on turnips, carrots or other roots, drinking water only.’

Although some of these recipes sound amusing to us modern day gastronomes, before we laugh at our ancestors too much it is worth pausing to consider the food eaten today. What exactly is in the Extra Value supermarket sausages, the Bargain chicken nuggets or the Economy burgers? Probably the same offcuts and bits of offal as used in the old recipes, only today it is all ground up and disguised. At least they knew what they were eating in the old days!

I don’t expect anyone to rush out and try any of these recipes, but some of the well  known contemporary chefs have produced some really good recipes using some of these more unusual cuts that are more suited to modern tastes and methods of cooking. To anyone interested in farming and our food heritage I would encourage them to look up some of the recipes by chefs like Hugh Fearnley-Whittingstall or Fergus Henderson, and have a go at cooking something interesting!

Food of England Project – A collection of every traditional dish, every recipe and every classic cook book.

For those interested in rare breeds see Rare Breeds – Whats the point? by Michael Harding…