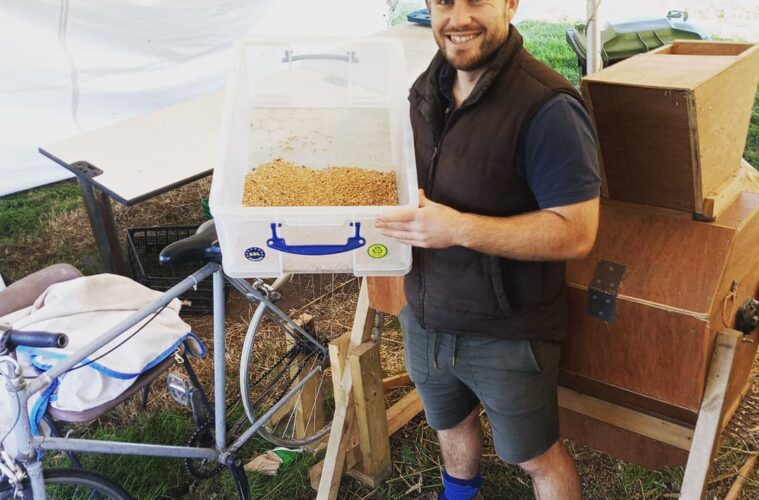 Cereal production is fundamentally inaccessible for most people. For eight months of the year the fields look just like grass. There are no cute lambs or calves to look at, no colourful vegetables to pick. To grow and process cereals you need specialist machinery, which is far out of the reach of most people. Therefore, unlike growing vegetables, it’s not just something you can start doing for yourself. Sadly, whether they like it or not, many arable farmers are forced by practical and economic constraints into producing commodity crops, with little opportunity for any kind of direct relationship with consumers (or bakers).

I will save my essay on the respective merits of heritage grains, low input farming systems and regenerative agriculture for another article, but something happened to me two years ago that has ultimately changed my relationship with baking and grains forever. I’m a lifelong real bread devotee and having worked in the agricultural sector for the last decade I’ve always been passionate about food production. However, despite squeezing every square centimetre of productive space out of my allotment and garden, I have always regarded cereal growing as something out of reach to anyone without a tractor.

Enter the Field to Loaf team. In the summer of 2020 I saw that my friend and former colleague Helen – alongside fellow grain enthusiasts Mahala and Nick – was running a course at Waterland Organics just outside Cambridge. The aim of this day was to introduce everyone to the basic science behind cereal growing in low-input systems and bake some incredible loaves. Most interestingly for me though, was that we learned how to grow, harvest and process cereal crops by hand. This was something it never occurred to me was possible on a small scale.

After hand harvesting with scythes, the grain went into Helen and Nick’s incredible homemade bike powered threshing machine (this has to be seen to be believed) to separate the grain from the straw, followed by an antique Victorian winnowing machine (from a local auction) to get rid of the chaff. Then it was into the tabletop mill, to be turned into flour. Having never baked with freshly milled flour, I was blown away by the intensity of the flavour and the speed of the baking process. The fact that this was growing in the field about 40 minutes earlier, made it even better.

Off the back of this course, I have spent the last two years cultivating a genetically unique YQ wheat population on the allotment behind my house (much to the amusement of the allotment committee). This autumn, I had my first proper harvest and was able to process and mill enough flour for three (totally worth waiting nine months..) 500g loaves of Exning YQ population bread. Things have got a bit out of hand and having taken on the allotment plot next door, I should have enough growing space for 30 loaves.

It’s no exaggeration to say that this is has been an incredibly formative experience. It’s given me a completely new understanding and appreciation of what is required to produce the flour we consume. As someone working in the agricultural sustainability world, I can see first hand why farming systems have evolved as they have done and why the unsustainable elements of mainstream cereal production have appeared. Most importantly though, it’s inspired me to take ownership of the flour I bake with.

I’ll be honest, there are far easier ways of ensuring the provenance of your grain. I’m not expecting every real bread bakery out there to start growing patches of wheat out the back of the bakery (although some people have). However, imagine if we encouraged members of the public to start growing their own grains like this? Suddenly, cereals wouldn’t be so uninteresting any more,

In my part of the country, we are blessed with a number of working windmills. They are such a fundamental part of our local food heritage, yet in many cases the grain they mill has to be bought in from miles away. I can’t think of a better starting point to get people engaged about real bread than growing and milling some of their own grain, all in their local area. Let’s not forget during lockdown when the shelves were emptied of flour, not because there was no flour, but because the millers couldn’t keep up with demand.

For real bread bakeries interested in developing a relationship with a local grain producer, this can require significant investment and for some, it may just not work. However, to my mind the best way to make sure this pays off, is to have informed, enlightened consumers who value and support what you’re trying to do. It’s not going to be easy to encourage consumers to value the traceability and provenance of their flour in the same way as with their vegetables or meat, but I see this as a vital starting point.

You can read a previous article by him on Microgreens here.