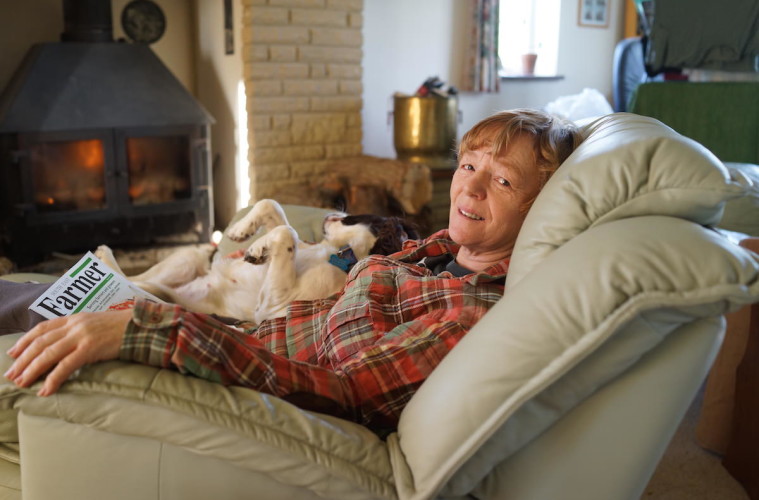 The saying “Two’s company, three’s a crowd” reminded me of the 1987 storm. On that windy sleepless night four of our children found their way into our bedroom.

Mercifully there was no thunder otherwise the sheepdog would’ve joined us! Last week wind and rain resulted in uninvited guests of a different nature. Was our mischievous visitor wearing football boots? It certainly woke us up and I freaked out as I’m no fan of small furry creatures with long tails.

I’ve colleagues who keep them as pets and I struggle to accept this concept. I suggested that the dogs help us. “No, that would cause chaos,” said The Master. So we baited traps, but this cunning little devil was adept at feasting on our goodies while avoiding capture. I couldn’t sleep until we caught the mouse. Where did it get in? We’ve now placed wire wool and mesh around all pipes entering the house.

Allegedly aged six, I announced to my parents that I had lofty aspirations of being a rat catcher. I can only conclude that this had something to do with my terrier: I shrieked and she fixed them – that’s what you call teamwork.

This month the kitchen table has been used to record a radio podcast. The Boy invited some friends down for the weekend, and together they set about making their fourth podcast of Farmerama. This is the brainchild of a group of youngsters who aim to share stories, ideas and research about small scale agriculture. The cheeky mongrels sneakily managed to capture me speaking while they were in our kitchen and I was cooking homegrown lamb for their dinner. 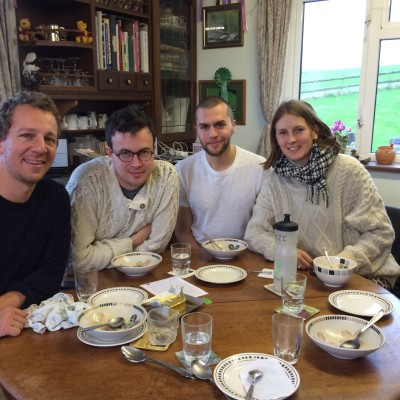 Farmerama Team around the kitchen table

These visitors mentioned being out in the field, so while I was treating lame sheep I suggested they could fetch the cattle that stood bellowing beside the gate and put them in the shed. They did, but one calf got left behind and it was time for the friends to head back to London.

By now getting dark, us older folk ventured out with torches to discover both cow and calf at large. The cow, a second calver, had suddenly gone blind. She was terrified, blundering around, walking into barbed wire fences. It was risky trying to guide her and at one stage she was heading straight for the river and then the pond. Miraculously we eventually got them both safely inside.

We treated her for listeriosis, but were unsure what had caused her dilemma. In the morning we had a vet check her over: he gave her more medication and said the prognosis was good. We left her eating and drinking, feeling confident of her recovery. Next day sadly she was dead, adding more cost for body disposal. Milk powder and nutlets were bought for Timmy, her four week old calf, whom we’re now feeding.

Did you watch BBC1 “Hugh’s War on Waste” programme? Doesn’t Hugh look better with his haircut! The programme highlighted shocking statistics including that one third of all food that we produce never gets eaten and the average household bins £700 worth of food a year.

I felt for the Hammond family at Tattersett Farm, whose parsnips grew too large. The supermarket dictates that pre packed parsnips can be no larger than 45 millimetres diameter, and loose ones between 45 and 75mm. The retailers set cosmetic standards for vegetables, claiming that they are only giving the customer what they demand.

I disagree: shoppers would happily purchase good veg that fall outside these set dimensions, especially if they reduced the price. As a consumer, I go on taste not looks and if it costs less, so much the better. I love parsnips. It’s a criminal practise rejecting consumable food based on appearance and thereby destroying farmers’ livelihoods. If you agree with me, go online to www.wastenotuk.com and support the campaign.

At the South of England Farming Conference, there was an interesting presentation on “What’s holding back the next generation?” The speakers weren’t letting anything hold them back and gave a positive spin on what’s unquestionably a tough time in farming today. Ahh… for the exuberance of youth! I wanted to cover my son’s ears when two speakers advocated borrowing up to the hilt. Braver men than me, but then I’m a woman. Will interest rates always remain so low? I’d rather work for myself than the bank! However I agree that it’s important for us farmers to understand our customers and present a positive image. The comment that it takes five positives to counteract one negative is so true. I liked the advice to build relationships, and to bring tricky customers into the home and talk with them around the kitchen table.

And finally, Tilley’s Tales. I’ll let you into a secret, a few days before my first day of work, The Master lectured my pack leader that she was not to call me “sweetheart” or any other term of endearment. Naturally I don’t care one jot what I get called. As long as my pack leader is pleased with me, I’m happy.

Luckily I managed to retrieve and flush out, which was all that was expected of me. I think it’s in my breeding but being first timers, we were both a little nervous of inadvertently getting the etiquette wrong. I noticed that when asked “Do you keep your dog kennelled?” my pack leader answered that I did have an outside kennel: however she didn’t say how often I go in it. I try very hard not to misbehave, as I do so love our evenings beside the fire, wedged in the armchair together.

This story first appeared in the South East Farmer