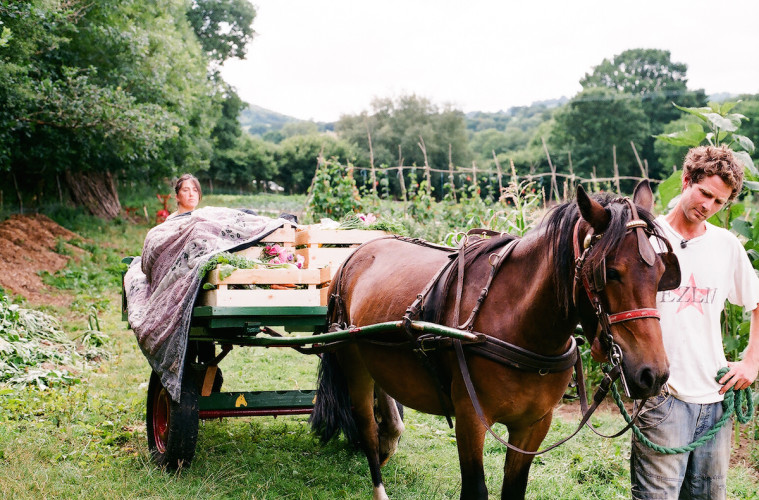 Could horsepower be the future of farming?

Andrew Wasley meets Ed Hamer a radical young farmer, land rights activist and driving force behind a pioneering Community Supported Agriculture (CSA) scheme in Devon to find out whether horsepower could be the future of farming.

The countryside around the village of Chagford, on the edge of Dartmoor in Devon, is the stuff of picture postcards. Rolling hills, thick forests, deep valleys, gushing streams, lots of farms. Village noticeboards carry posters advertising the local hunt’s forthcoming events. Passing 4×4 vehicles are ablaze with field sports stickers. This is traditional rural England, where country pastimes remain popular and meddling by outsiders is frowned upon.

But the noticeboards here are also dotted with posters hinting at a very different community. One announces a course in ‘Goddesses’ – workshops where participants apparently use ‘myth, journeying, movement and creativity’. Another has details on a local allotment scheme and how to get involved. In the village centre there’s a packed wholefood café and health food shop that sells lots of vegetarian and vegan food. There are adverts on the wall for organic smallholdings for sale in Spain. Three people queueing up for food are talking about the spiritual retreat – and associated detox – that they’ve just completed locally.

I’m in the cafe with Ed Hamer. He’s a radical young farmer, land rights activist and driving force behind a pioneering Community Supported Agriculture (CSA) scheme – Chagfood, based at Easton Cross just outside Chagford itself – that’s attracting attention because of its rejection of conventional, oil-based farming methods in favour of traditional horsepower. Everyone in here seems to know him – the planned Chagfood open day has just been postponed because of bad weather; people are asking when it’ll be rearranged for – and those that don’t will almost certainly have heard of him.

Ed explains how Chagfood supplies seasonal fruit and vegetables to a growing number of local households on a weekly basis, with the recipients paying an annual subscription fee of up to £600 to secure their share of produce for the year ahead. This unique upfront payment is partly what stands the venture out from more typical box schemes, where consumers generally pick and choose when and what to buy. The financial commitment helps Ed, and co-founder and business partner Chinnie Kinsbury, to plan and bankroll the year’s cultivation. It also means – as is central to the ethos behind community-supported agriculture projects – that the risks and rewards of production are more equally shared between consumer and producer.

‘In 2010, we supplied 25 weekly boxes from 1 acre of land; in 2011 it was 50 [boxes] from 2 acres, last year it was 75 boxes from 3 acres,’ he says. ‘This year we are planning to increase this further… but not [by] too much.’ Shareholders receive a full box of produce between June and December – the bountiful months – and a smaller clutch of items in the leaner times between January and May, all grown locally on land leased by Chagfood.

The venture began in 2009 after a public meeting organized by the think-tank the New Economics Foundation (NEF) found that a cross section of the local community wanted to try to ‘shorten the distance’ between food producers and consumers. A core group – Ed and Chinnie, supported by an enthusiastic body of friends and volunteers – rented a small plot from a sympathetic farmer and prepared the ground for sowing. The project secured financial backing from a number of sources, including the Big Lottery Fund’s local food programme, enabling the purchase of essential tools and helping underwrite costs.

Chagfood wouldn’t be possible, however, without the physical assistance of the shareholders and other supporters. ‘Each week we have between 10 and 15 people helping out,’ says Ed. ‘It’s about the community aspect and the cultural side of farming, a side that’s been lost… We have harvest [festival] and a spring festival; and the kids are always involved.’

With the scheme now in its fourth year proper, Ed confirms that Chagfood is financially self-supporting and covers two modest wages and the essential operating costs, which are kept low in part by the deployment of horsepower. Chagfood uses Samson, a Dartmoor X Welsh Cob, to carry out most of the cultivation of its fields – the original site has been joined by another field leased from a local organic farm – and to transport its produce.

Samson works the fields attached to a tillage device known as the Pioneer Homesteader. Ed imported the old-fashioned yet sturdy-looking device from an Amish community in the US: ‘It’s similar to a Massey Ferguson tractor… it straddles the bed [and can have] several different tools attached. It’s the principle of mechanization applied to horses.’

Ed’s enthusiasm for horsepower runs deeper than simple financial calculations – as well as being a farmer, he’s co-editor of the radical The Land magazine and a founder of the campaign group Reclaim the Fields, which seeks to empower those seeking greater access to land. He argues that conventional farming and agribusiness in the UK is fundamentally flawed because of its reliance on EU financial subsidies, and says that two of the biggest hurdles facing those wanting to get into farming are access to both land and appropriate skills.

The farmer believes that – stripping it all down – what Chagfood is actually doing is just growing food and selling it at a realistic price: ‘It’s the real cost of food, our costs are the same since we started, compared with the supermarket [prices, which fluctuate],’ he says. ‘We’re able to tailor production to local demand. Local food schemes [like this] are more resilient, we’re not plugged into the food infrastructure. We are connecting people to local food.’

The European Union’s controversial Common Agricultural Policy (CAP), originally set up to ensure a steady supply of food for European consumers and help farmers receive a fair income, sees more than 50 billion euros paid out annually in subsidies to farmers across Europe. Critics point out that this currently takes up more than 40 per cent of the EU’s annual budget and amounts to the equivalent of each EU citizen paying out 100 euros per year. The CAP is also criticized as a large amount of its payments go to the biggest farms, while many smaller producers struggle on low incomes.