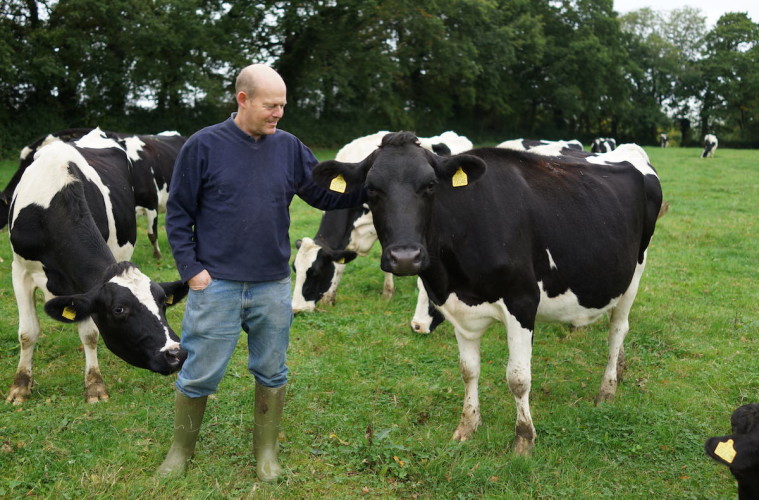 We visit Longleys Farm in Hailsham, East Sussex to interview Steve Hook, the pioneering organic raw milk farmer and indie film star of The Moo Man. We get Steve’s viewpoint on the proven model of raw milk vending machines in Italy, the latest on the FSA’s raw milk consultation and find out whether there will be a Moo Man 2. We also get to see where the raw milk and butter is produced, processed and bottled and meet some of the other stars from the film…

Read Interview
Can you give us a bit of background on the family farm and what inspired you to start selling raw milk in 2007?

Phil my dad has been on the farm all his life establishing the herd in 1959 and gaining tenancy in 1972. I joined the partnership in 1991 and our aim is to manage a dairy herd that is truly sustainable; caring for the wildlife and environment around us, whilst making the farm viable enough to support our family.

We converted the farm to organic farming methods in 1998, achieving Soil Association certification in August 2000. This means that we farm without the use of any chemicals or routine antibiotics.

We started selling direct in early 2007 because we believed in the quality of our milk and the demand was there with local people asking for us to supply them. So when the Food Standard Agency (FSA) changed their rules in 2006 we did some research into gaining a raw milk license and started with two local milk rounds. We now do farmers markets in London, including Borough Market, and also offer a nationwide delivery service currently supplying 3500 pints a week.

How does raw milk differ from pasteurised milk and why is it more expensive than supermarket milk?

Raw milk is milk that has not been pasteurised or homogenized. When you buy raw milk it will be from a licensed raw milk producer (of which there are currently around 100), that meet strict standards and are subject to regular inspections by the FSA.

When we started selling our raw milk direct to customers in 2007 we found people prefer the taste and are prepared to pay a premium because they want to buy from a trustworthy source and support local producers.

What do you make of the current UK supermarket milk price war - 95 pence for 4 pints of pasteurised milk is a lot cheaper than your raw milk?

It’s bad news. Milk is now largely viewed as a commodity by consumers and a supermarket price war only serves to further devalue it.

Luckily our customers know what they are buying and are willing to pay a premium for our milk and butter because they value  having a direct relationship with us rather than a retailer or middleman.

We need more independent farmers in the UK to start selling their produce direct and educating consumers on the value of high quality locally produced food.

How does the taste differ and are there any health benefits to drinking raw milk?

Raw milk has a purer more creamier taste compared to pasteurised milk. When you pasteurise milk you kill off all the bacteria, even the good stuff and whilst legally I am not able to claim any health benefits, our customers tell us that drinking our raw milk has helped with a range of allergies from hay fever to skin conditions and dairy intolerance.

What do you say to those people that claim drinking raw milk is dangerous?

Look at the stats. If you were to ring the FSA and ask them of the 1 million plus cases of food poisoning per year reported, how many can be attributed to raw milk consumption over the last ten years, they would have to tell you none.

You famously had a vending machine in Selfridges for 3 months but had to remove it due to the Food Standards Agency, do you think now that Italy and other countries are allowing farmers to use vending machines to sell raw milk that it's only a matter of time before the UK follows suit?

It’s really encouraging. Italy now have over 1400 raw milk vending machines and it is actually illegal to sell pasteurised milk via vending machines. Italy is setting the pace and I recently heard that they have started exporting machines to New Zealand as other countries begin to embrace selling raw milk direct to consumers.

I also strongly believe that these machines should be owned and operated by the farmer to keep the number of links in the food chain to a minimum – this is key to reducing risk and ensuring full traceability from farm to consumer.

The FSA are currently conducting a consultation on raw milk and I spoke at an open debate held in London on Monday the 31st March. The meeting had over 250 attendees (mostly whom were pro raw milk) and was broadcast live via a podcast; this level of transparency bodes well and it was great platform to have a proper discussion on raw milk.

Whether we will be allowed to sell our raw milk via farmer owned vending machines in retail premises is hard to say. It comes down to whether we want to be at the forefront of the raw milk industry or a backwater and it seems to me that there is a strong correlation between the strength of a country’s pasteurisation industry and their attitude to the sale of raw milk.

The signs are encouraging but we won’t know until the consultations findings are announced in July; from what we hear the FSA’s preferred outcome is to keep the current rules in place, to allow licensed UK raw milk producers to continue selling their milk direct from the farm gate and via the internet but stopping short of Italy’s proven vending machine model.

We understand that The Moo Man has been adopted as the main film as part of the United Nations International Year of the family farm - how has the film impacted on your livelihood and will we see a Moo Man 2?

It’s had a huge impact. Without the film we would never have travelled to many of places we’ve been for the various film festivals and Q&As as part of the tour of the independent cinemas the film was shown in.

Going out to the Sundance festival in Utah was an amazing experience for dad and me – with all the attention and media you couldn’t get more removed from the milking parlour.

Also I am incredibly proud that The Moo Man has been adopted by the United Nations as their main campaign film for the International Year of the Family Farm. So far it has been screened in Brussels and Vienna and possibly may be shown in London this July too.

Finally I can tell you that the directors Andy and Heike are working on The Moo Man 2 so watch this space.

Finally, how do you drink your milk?

On my cereal in the morning but also love to drink it on it’s own. You can’t beat a thick slice of rye bread and some of our butter or ghee either!