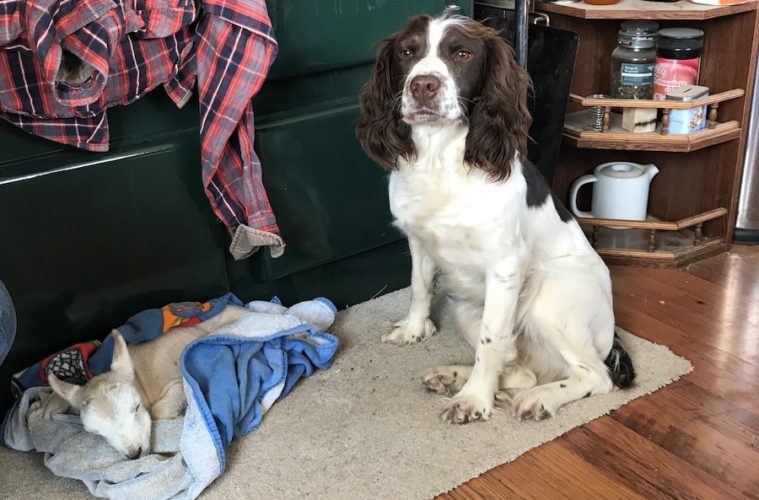 They’ve had a precarious start. It’s a triumph they’re alive. So although I’d threatened to send the sock lambs to market, it’s unlikely. They regard me as a substitute mum. “Georgie” for example is special. She was born on St Georges day and named by Nigel’s friend, Hannah. It was her first visit to the farm. They found this tiny cold lamb laying abandoned in the field and picked her up, handing her over to me in the kitchen.

Hannah begged me to save her and I didn’t want to disappoint. Initially I disputed that she was still alive as her mouth was stone cold but then I saw the slightest infrequent chest movement.

We wrapped Georgie in a towel, and placed her by the Aga. I put a drop of Kick-Start on her tongue and I fetched a syringe filling it with warmed dextrose and water which I then injected into the intra peritoneal space. Next I gave small amounts of dextrose subcutaneously and set Hannah on blow drying Georgie using low heat. Nigel went to catch a newly lambed ewe and milk some fresh colostrum. 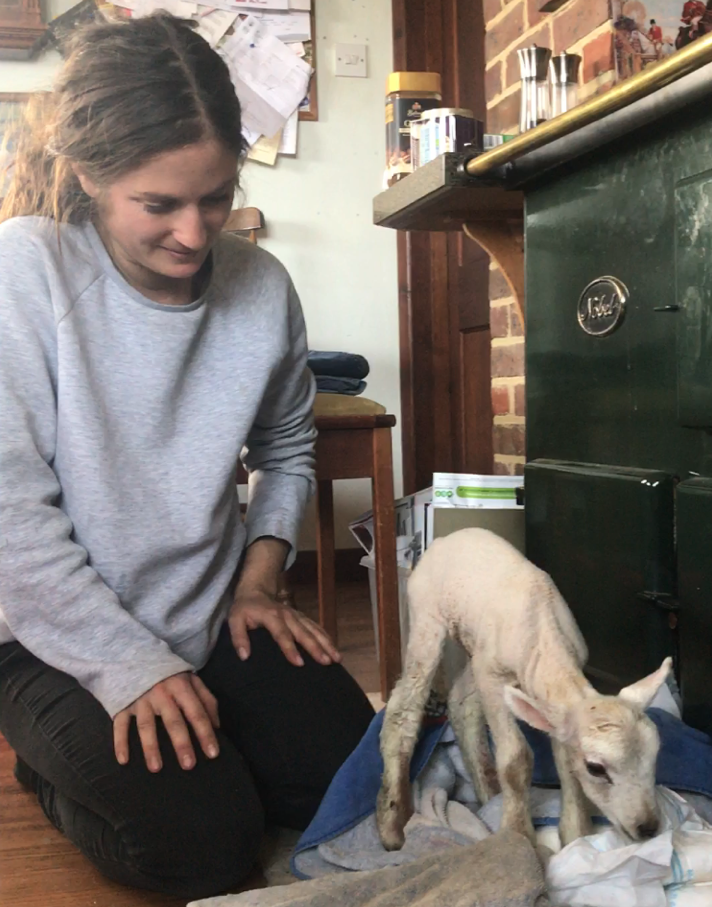 I told them both to expect the worse, but Georgie was a fighter and an hour later I was able to give her a tube feed. A few hours later, she’d found her voice, christened the floor and sucked milk from a bottle. We never did discover which ewe lamb was her mother. Georgie rewarded our efforts by defying the odds in a most un sheep like way. She’s now part of the mischievous gang.

However I was horrified when on opening our curtains I saw that the gang were camped out under the oak tree. Not just any old oak, but the iconic one that legal beagle daughter had decreed was to be the sight of her wedding ceremony due in a couple of days time. We’d been given strict instructions that this area was to be kept poo free. The field had been used for lambing, and had then been silaged, keeping it clear of livestock. I hoped nobody noticed and quickly whisked the lambs away for a holiday on the farm up the road.

The wedding was a testament to all those friends and family that pitched in and helped to transform a working farm into a venue fit for ceremony and celebrations. With tears and laughter along the way, it culminated in a very special day and a married daughter. There was a torrential downpour 40 minutes before the start, but then the sun shone for the ceremony which legal beagle was determined to have outside.

At least her father wasn’t worrying that he was losing combining time! Father and daughter entered the field to the accompaniment of brother in law on the trumpet. We were lucky to get all the guests undercover of the barn before the rain returned in typical harvesting weather.

The happy couple are honeymooning for three weeks in Canada. While kayaking they messaged us to say they’ve seen humpback and killer whales, porpoises and eagles. Next they go cycling: we’ve been told not to worry, there’s no internet and they only have to dodge the bears.

By comparison, our honeymoon of five days in the West Country seems rather tame. My husband describes our reception as a bun fight in the village hall. I’d requested to walk down the aisle to the music of “The Pink Panther” and to sing the rousing hymn “Onward, Christian Soldiers.” I was informed this wasn’t appropriate. I suggested a barrel of beer and fish and chips for the reception. My ideas were ignored, so I’ve asked our children if they could arrange it for my wake instead.

Noisy ewes failed to keep us awake. We’ve weaned our lambs by moving the ewes back home this year – otherwise there’s always some clever clogs that manages to overcome physical barriers in order to reunite. The lambs didn’t seem bothered, but the ewes kicked up a rumpus. They broke out once and we retrieved them from our neighbour’s field. I’m planning on going through them shortly, sorting thins from fats. The culls will soon be in market.

We’ve also drafted our lambs, tagging those that we think worthy of joining our flock. Mr Crack-On was helping. He likes to keep us on our toes. There ensued some lively debate as to what exactly constitutes a good breeding ewe. Mr Crack-On and Nigel favour Romneys. I prefer mule crosses, something with length, supplying plenty of lamb chops. The lads grumbled when I chose to keep a few Suffolk crosses. When I picked a lamb with horn buds there was uproar, but I insisted that the odd character in our flock was a positive decision. I’ve not yet dared to tell Mr ‘Crack-On’ that Georgie will also be staying: perhaps he won’t notice if I ply him with beer.

As luck would have it, the groom’s mates weren’t quite as thirsty as he’d estimated. The naked cake, despite leaning, must have tasted good because there wasn’t a scrap left. So should you drop in, there’s no cake but we have plenty of flowers, cheese and beer. It’s ever so handy because the barrel of beer is residing next to our kitchen table. It would be a shame to waste it, don’t you agree? After all I need to get some inspiration from somewhere. In truth my head does feel strangely fuzzy. It must be all this writing. Maybe I need a breather, must go absorb some harmony from the farm. In reality, best to crack on with picking plums!

PS: “A Year on the Farm,” Wednesday 9pm, showing on More4 is worth a look.