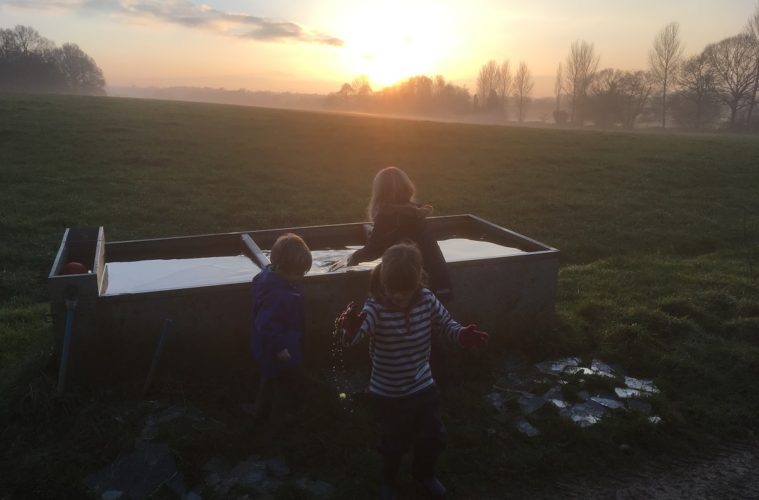 This month has seen contrasting events on the farm, from the giddying heights right down to the darkest depths says Dan Burdett..

Trust a farmer to challenge the winter weather to a duel!  After my short-wearing boast last month the winter has well and truly bitten here in Sussex, with most of January spent at or below freezing. Needless to say the shorts finally gave in to the inevitable and the trousers made a triumphant return to working life.  I’ll just set the weather one final challenge, that of the ongoing shortage of water in these parts, something we are desperate to attract as we head gingerly towards spring. 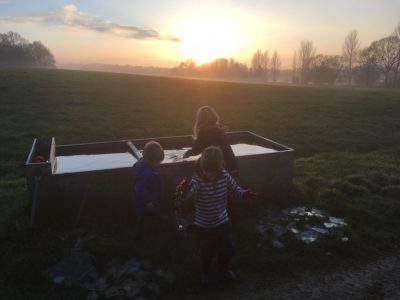 The kids playing with the plentiful ice

This month has seen contrasting events on the farm, from the giddying heights right down to the darkest depths.  Lets start with the good news, which is by far the most important aspect as a barometer for how we are doing.  We carried out the first pregnancy scan of the cows early in the month, scanning 176 of the cows who were served only in their first cycle and found 164 of them to be pregnant, meaning that around 76% of the cows held to this 1st service.  To put this into perspective, we used to struggle to hit 50% only 5 years ago, so this is a huge jump for us and shows how well the farm is being managed right now.  We have now surpassed our goals set 3 years ago and so these will need revising upwards in order to carry on the progress.

Mid-winter also brings with it many problems, some of which are new to us.  The cows have now been inside since the beginning of November and the time on the concrete starts to take it’s toll after a while, with a few more lame cows and also a few more infections that need treating with antibiotics.  As organic dairy farmers our aim is to reduce the level of antibiotic use considerably but I’m finding it hard to take that final leap and stop using them.  We had a few cases of foul in December, basically an infection in the foot which causes swelling and severe lameness.  Left untreated this can potentially lead to the cow being culled so I see no good reason not to do so as long as animals are not blanket treated.

We have also had a few cases of e-coli mastitis, another potentially life threatening illness which can kill a cow if left untreated.  We have a very healthy herd of cows who show low levels of white blood cells in their milk, meaning they aren’t being challenged by infection.  However, this can mean that when they come across some e-coli they are less able to deal with the bacteria.  One cow in particular had a narrow escape and only the timely work of Luke enabled her to pull through.  But only last week we lost the fight with another and unfortunately she had to be put down, something that rarely happens here.

One incident in particular this month made the team here come together in an amazing way during a very difficult situation.  When pushing the cows into the collecting yard for afternoon milking a few of them noticed an open door and raced through it.  Unfortunately this door leads out to our slurry lagoon and in their excitement 5 of them jumped in, not realising that it wasn’t terra firma.   Due to the quick thinking and actions of Luke, 4 of them were able to be pulled out alive and well, but unfortunately 1 of them was just too far away and didn’t make it.  I have nothing but praise for Luke and Eloise for rescuing 4 of them and will ensure that any complacency that existed before was extinguished that afternoon. 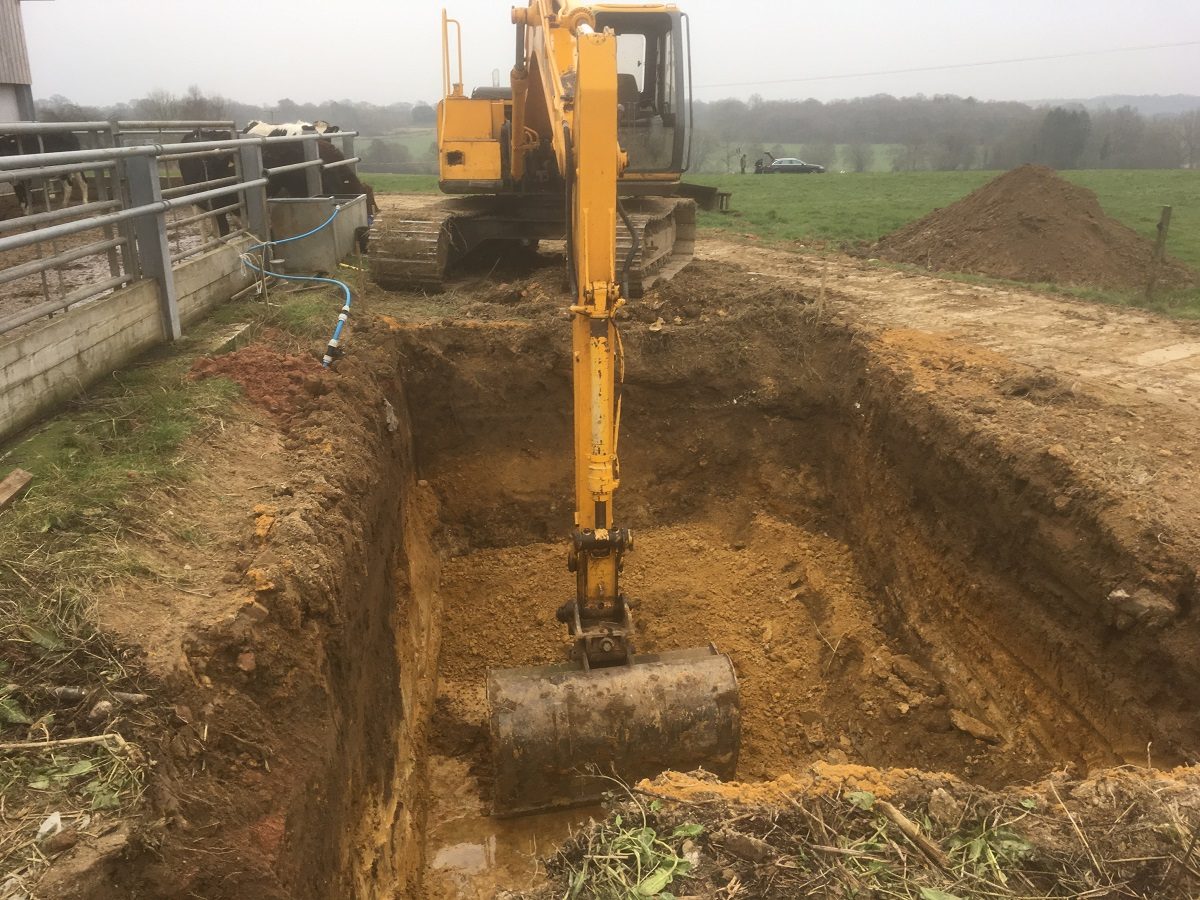 Preparing the ground for our new rainwater tank

As spring approaches my mind set changes from housed animals to grazing animals and what needs to be done to make the transition as smooth as possible.  In the next month I hope to be erecting around 3500 metres of permanent electric fencing to enable us to graze the whole farm, plus new water tanks and pipes to go with it.  This is a very challenging task but hope that we can get a big chunk done before turnout in the middle of February.  The cows are now getting twitchy and any slightly irregular movement in their eyesight results in a mass stampede towards the gate!

We are also finishing the installation of a new rainwater harvesting tank, which will collect rain from many of our roofs and redirect it into the drinking water system, thus stopping it from entering our slurry lagoon, therefore reducing the amount of dirty water we have to spread on the land over winter. 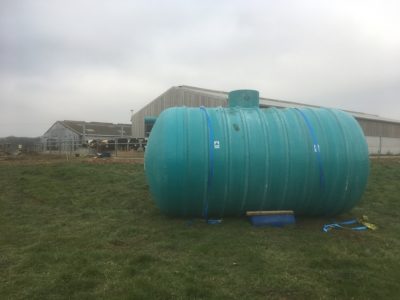 The rainwater tank before installation

A common theme amongst fellow contributors this month is the Oxford Real Farming Conference.  Held during the first week of the year, it brings together farmers, growers, smallholders, environmentalists and philosophers from around the country to discuss the direction we see the industry moving in and to challenge some of the established thinking.  This is in contrast to the long established Oxford Farming Conference, mainly held by the established companies and institutions within the industry, with suits not jeans being the order of the day.

I saw some fascinating presentations and was delighted to see so many people trying to make a difference in the world.  I was left in no doubt that the food system is broken, with obesity and starvation ever increasing around the globe, and that systemic change is needed in order to halt this awful trend.

However much admiration I have for the organisers of the event, I was bitterly disappointed to hear Colin Tudge, co-founder, state that it was futile to try and talk openly about this with the rest of the industry as they were so far apart in their ideas.  I’m afraid that without meaningful involvement and buy-in from the majority of the industry, change will be even harder to bring about.  However painful it is, I hope that a way is found to facilitate this in the coming months and years.