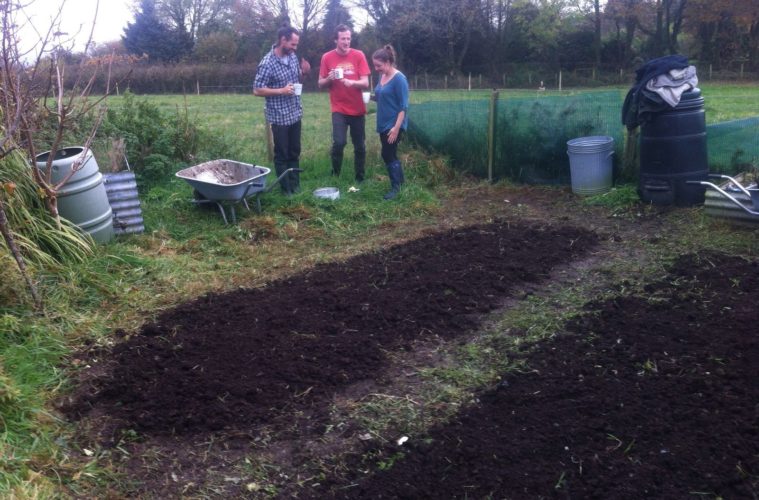 Mountain Hall Farm: It’s not all about the animals

It’s about the garden too says Alex Heffron in his latest update from Mountain Hall Farm..

The animals certainly take most of our time but it’s not all about them, even if they think it is. No, it’s not about us either, it’s about the garden too. One of our goals is to be producing at least 75% of our diet within our first five years. By the end of next year we will be 90% (we don’t have sheep yet!) sufficient in meat, eggs and dairy, but there’s a bit more work to do with the kitchen garden and polytunnel to grow 75% of our fruit and veg. 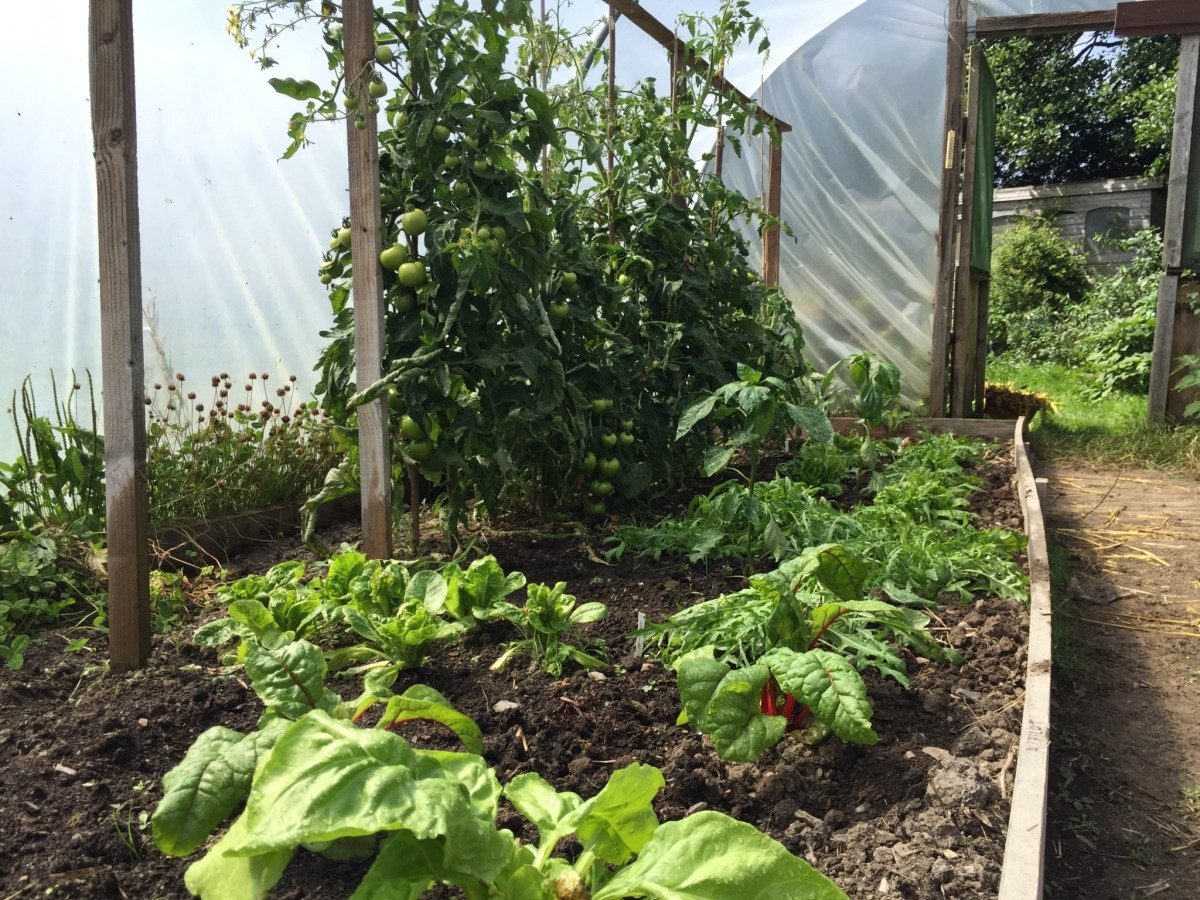 When it was sunny..

As we only moved in during July, it was a bit late to get a good crop but we got what we could. Our third day here was spent planting up the polytunnel! Also the previous owners were very kind in leaving five very well developed tomato plants, a line of potatoes, a patch of lettuces and a patch of onions. We added to that butternut squash, courgette, two more tomato plants, rocket, little gem, peppers, chard and spinach. And outside we planted beetroot, kale and baby corn. Already existing were a fair few raspberry plants, and of course plenty of brambles all throughout the hedgerows for blackberries! The only thing that didn’t quite make it in the polytunnel was the peppers – we didn’t have a great summer, and with them being planted so late I guess there just wasn’t enough time for them to ripen. But for a period of 6-8 weeks we were self-sufficient in courgette, tomatoes, salad, spinach, chard and onions. The outdoor plants didn’t fair so well, although the cabbage moths did at our expense. Lesson learnt for next year – get some protective netting for outdoor brassicas and leafy veg. The baby corn did survive, though because I’d never harvested it before I didn’t realise that the cobs grow from the stem, and not at the top… It was our Australian friend and helper that showed us, and by this point they weren’t so baby, more adult corn – but they did go into a stir-fry all the same! The raspberries were very giving – we polished off at least a punnet every few days for about a month or so, and carried on picking another punnet each week until November. Same went for the blackberries though most of these were made into jam.

We’ve also had our very first apple juice and cider making day which we did with Sam’s parents and our nine year old nephew. It started with me and Sam picking 100KG of apples from a neighbouring farm, who kindly said we could have them for free as he couldn’t use them this year. Hopefully we can take a few bottles of cider round in return. Then a week later we had to wash, chop, crush and press the juice into buckets. We made 14 litres of juice, and about the same that’s being fermented for cider. I’ve got a feeling it might be fairly rough and strong stuff as I’ve never made any before but then that’s the point of farmhouse scrumpy! 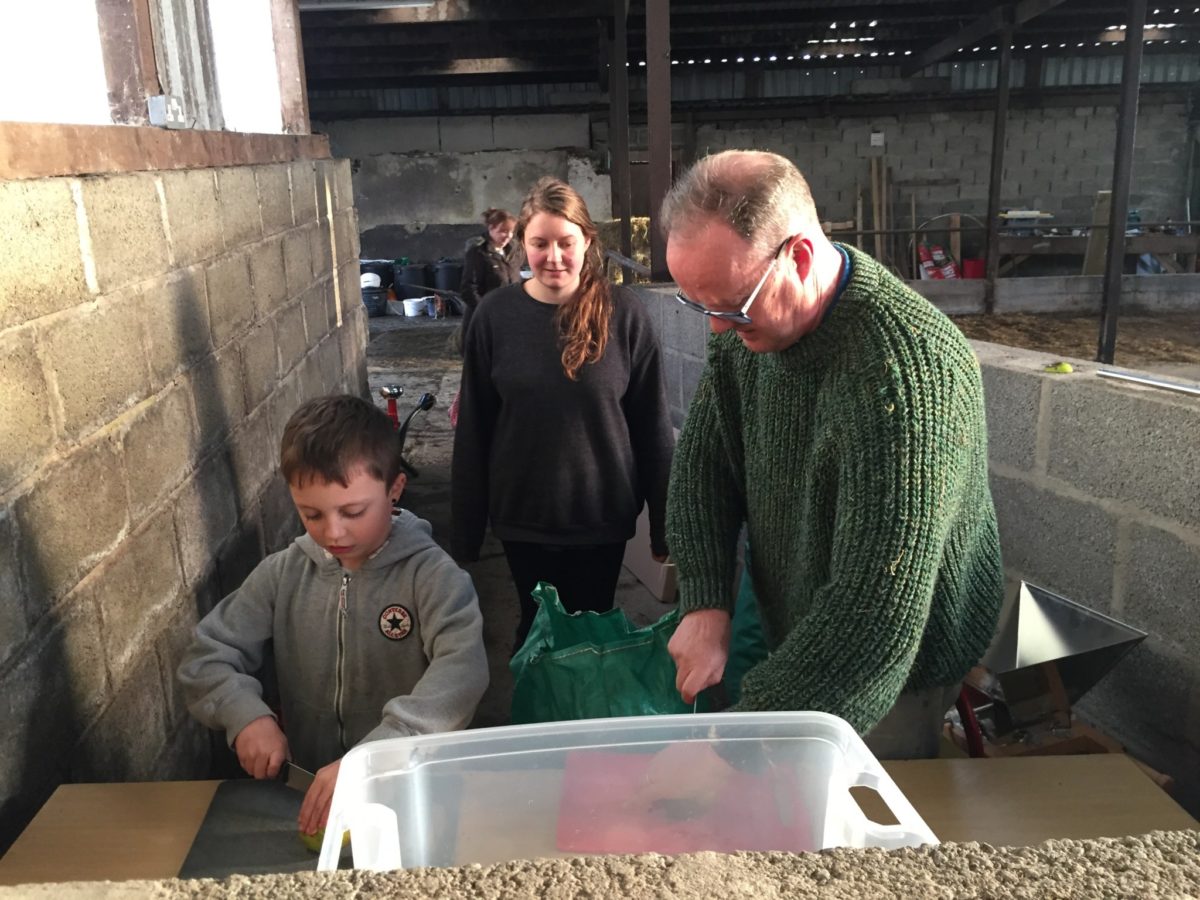 In time for next Summer we also spent a morning weeding, turning, manuring, and mulching one of the outdoor beds to plant next year’s crop of garlic – which are now starting to shoot through. 200 bulbs planted or thereabouts, be interesting to see how many we get! We are hoping to get a year’s supply. It was thanks to our friends Dick and Lizzie who made this a 4 hour job and not a full day! 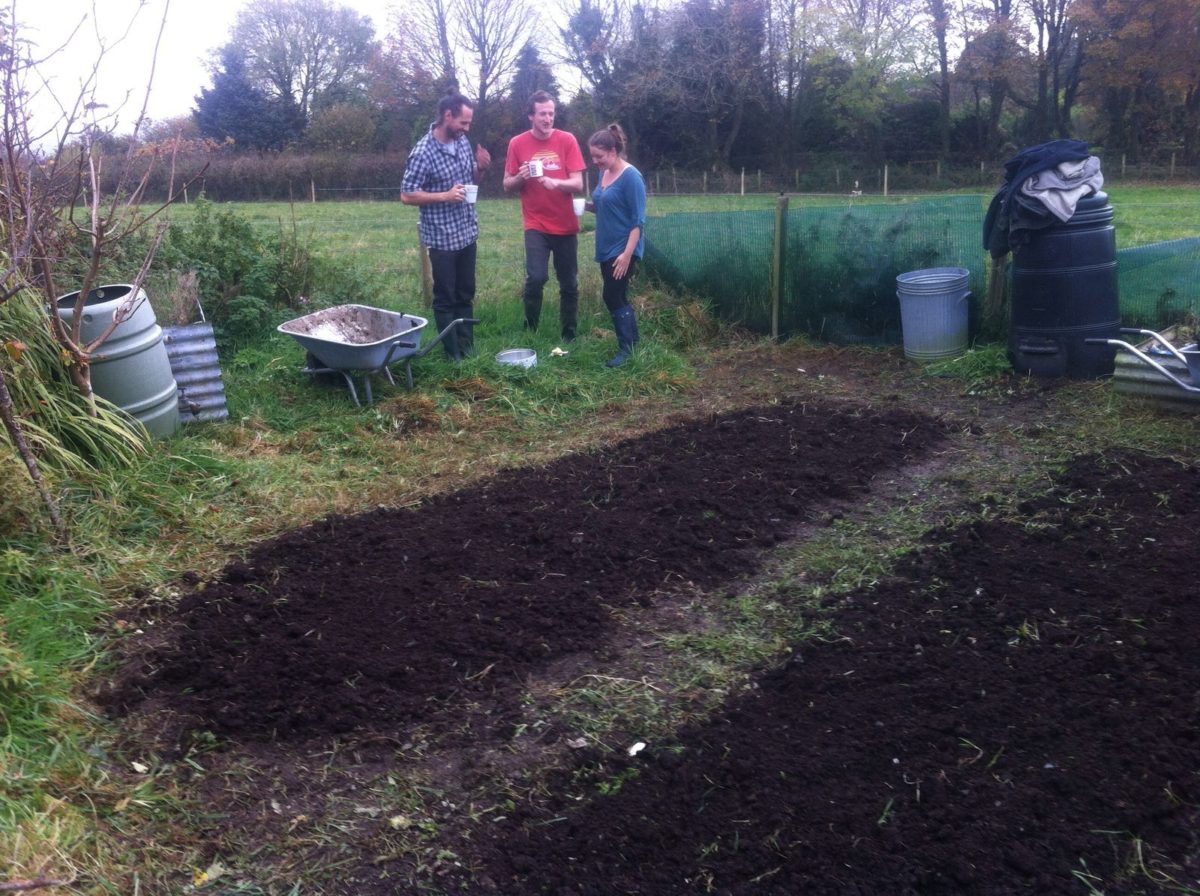 Tea and biscuits are an easy way to rope friends in to helping!

We’re shortly to plant a mini orchard with apples and pears, with an understory of perennials like comfrey, in the area where the pigs have been which has been amply fertilised – with the grass all killed off ready to plant into.

The Christmas and New Year period has seen us get back to some all-important farm planning. We’ve sketched an overview of the various systems and fundamental elements we want to develop. We’ve got about 25% of them going and this year will add a few more.

Our three main goals for the year are; to start selling raw milk, start selling beef, and to get the farm ready for our wedding in July which we’ll host here. So that’s the first half of the year sorted! We’re pretty much ready to start selling our raw milk. We just need to get the FSA inspector back to get a full inspection, finish our bottling room and get the EHO out to inspect that and we’ll be more or less ready.

Raising our own chicken is something we’d like to do this year, not to sell but just for our own consumption. We’ll ‘tractor’ them across the fields Joel Salatin-style – providing them with fresh pasture to nibble on each day and providing the pasture with plenty of fertiliser and beneficial scratching action.

The two biggest limiting factors to mob-grazing is the water and fencing infrastructure. So in the next couple of months I’d also like to spend a good amount of time putting some ‘permanent’ electric fencing, after a year of experimenting we feel fairly confident of how we’d like to divide the fields up into smaller ‘cells’ for mob-grazing. Along with that I’ll lay new pipework and will buy some moveable water troughs. For the dairy girls the water is easy – we’ll just place a trough in each of the ‘laneways’ (an Australian term that’s stuck with us) that they’ll have permanent access to.

We plan to grow more of our own fruit and vegetables than we did last year now that we’ll have a full year to do so. That means we’ll turn over some of the beds that are already formed in our small garden area, along with planting up the polytunnel. We’ll propagate a fair bit from seed – always a nice job.

It will feel rewarding to finally start selling our produce. That will start this month, with our first couple of pigs going off. We don’t ever envisage selling pork to be much more than sideline income for us, but it’s nice to know we’ve sold 60 kilos worth of pork (the other 20KG is for us) for a small profit. We can’t wait to start selling our 100% grass-fed Jersey raw milk and 100% grass-fed Dexter/Lowline beef. Marketing and sales will be very important this year, and no-doubt another learning curve awaits.

With all that in mind I’ve got a feeling it’s going to be a pretty busy year ahead but after a couple of months of hibernating I’m now really looking forward to cracking on!