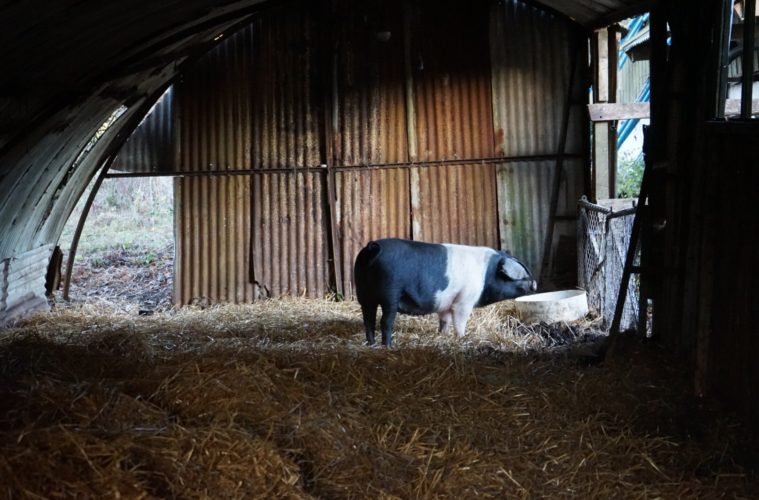 The Ashdown Forest is an amazing place to be in the autumn and this autumn has been particularly spectacular. It’s wonderful going round the animals every day and watching the leaves change across the forest.

Winter routines have started now. The cows are all in full time. Feeding baled silage and bedding down, having been added to yard scrapping, as daily jobs. The total milking time is considerably reduced in the winter as it only takes 5-10 minutes to herd the cows from the barn to the collecting yard for milking. This process can be somewhat delayed by needing to persuade sleepy calves to come along. The three heifers I spoke about in September have now calved Cicely, Ottelie (Tilly) and Iona. Cicely and Tilly have settled into the milking routine very well and now come in the parlour with little or no trouble. Iona on the other hand started out very well, she was stepping up in the parlour to eat her oats before she calved, which was all very promising. However after miraculously producing healthy twins (unusual for any cow especially a heifer) she has been a total pain to milk, kicking and swaying her rear end about. She does seem to be improving little by little but it’s a lot of work for Robin. As Robin said the other day, people come and marvel at how our cows come in to the parlour and know where to go not realising how much it can take to develop their trust and get them to this point. It’s wonderful when they settle and become part of the herd.

Here is the future of our Lleyn flock posing beautifully!

On the sheep front in October, Ruben and I sorted the flock into different groups. I chose 12 out of 32 ewe lambs to keep. They will go with the ram next autumn. I have been keeping a complete record of which ewes are lame, affected by flies and have lambing problems for the last few years. As the flock has increased I can be more selective and only keep lambs from the very healthiest ewes. We put padlock tags in the ewe lambs ears soon after they are born to track who their mothers are, but unfortunately a few always loose these little tags.  Because our breeding ewes have not always been pure Lleyn we have a wide variety of fleece quality in the flock. I need to find a way of separating  the best fleeces for spinning without inconveniencing the shearers too much. Perhaps I’ll keep a few ewes aside to shear myself, although I still need to learn the art of shearing!

Columbus seems to be getting on well with his ewes. Look at the colour of those trees!

Ruben and I sorted through our 20 tegs before they went in with Columbus, the Jacob ram, at the beginning of November. We decided that we shouldn’t breed one small ewe as, I could foresee her having major lambing problems. We also sorted through the breeding ewes. We have some very old ladies in the flock who were at the farm when I arrived. I find culling ewes very difficult. I feel like these old ones taught me a lot and put up with my inexperience… but I have to balance my personal connection to the animals with pragmatism. The ewes chosen to cull are either loosing weight because their teeth are bad, or as in the case of two of them, have been very lame at lambing more than once.

“I find culling ewes very difficult. I feel like these old ones taught me a lot and put up with my inexperience… but I have to balance my personal connection to the animals with pragmatism”

We have also had an overhaul of the pig plan going forward. April and May have been our breeding sows at the farm for the last 4 years. They had their first litters of piglets the first spring I was here. Sows mostly have 2 litters of piglets a year, which means at this point they have both had around 7 litters of piglets each. April has not got pregnant since she had her last litter despite various interventions and with Izzy’s arrival,our saddleback gilt, it feels the right time to start a new group of sows. A gilt is a young female pig that hasn’t yet had piglets. Once a gilt has had a litter she is known as a sow.

Michael and I took April to the Abattoir on Monday. We loaded her at 6am in the dark and got there at 7am. I’m good at being calm taking an animal to slaughter. Animals pick up so easily when we are stressed or upset, I feel it is necessary to remain as calm and kind as possible, but I find it strange now to go to the pigs and find April missing. She was a very vocal pig and could often be heard squealing and chatting to passing people or to the boar when he was annoying her. May will have one more litter of piglets before also departing.

Izzy is now with two of April and Mays daughters, named Dakota and Montana, by Michael (our excellent pig and chicken feeder). Introducing pigs can be quite a nerve racking business, they are capable of causing each other quite serious injury. We had Izzy in an adjoining pen to Dakota and Montana for a few weeks before we moved them in to Izzy’s pen. It ended up being a little like refereeing. Dakota and Montana were very cleverly taking it in turn to chase Izzy while the other cooled off in the mud. Izzy was getting more and more tired and hot until Ruben and I decided to intervene and pushed her pursuer’s away. She slumped down with great relief in the mud for a rest. Pigs can’t sweat so running stamina is not there strong point. We carried on watching and interfered a couple more times when things got out of hand and then rather nervously went for our lunch. Thankfully nothing terrible happened in our absence. The three are now settling down to life together, although I think Izzy will always be bottom of the herd hierarchy.

May’s litter of piglets are growing very well and still making the odd escape. They have so much fun when they escape investigating the edges of the cow barn and searching out acorns. They are nearly at the age now when they will wander a lot further a field, so I think I’ll need to make a better job of their fence. It does also get easier to keep them in as they can no longer squeeze out of tiny gaps!

The piglets got out yesterday and entertained us and the cows with their antics.

While many calves have been born on the farm in the last two months with no problems, including two lovely heifer calves one pure MRI and a MRI x Montbeliarde, last week we had to decide to put one of our older calves down. She was skinny and weak even after two weeks of vitamin injections, antibiotics and rumen medicine. If anything worse rather than better after the treatments. The vet thought that perhaps she had some internal malformation that hadn’t surfaced until she started eating substantial amounts of grass and hay. When you’re caring for a sick animal you have to believe they will get better, and to lose them is always especially hard. But as people always say, where there is  livestock there is dead stock, and it is essentially very grounding to be so tied up with the cycle of life and death.