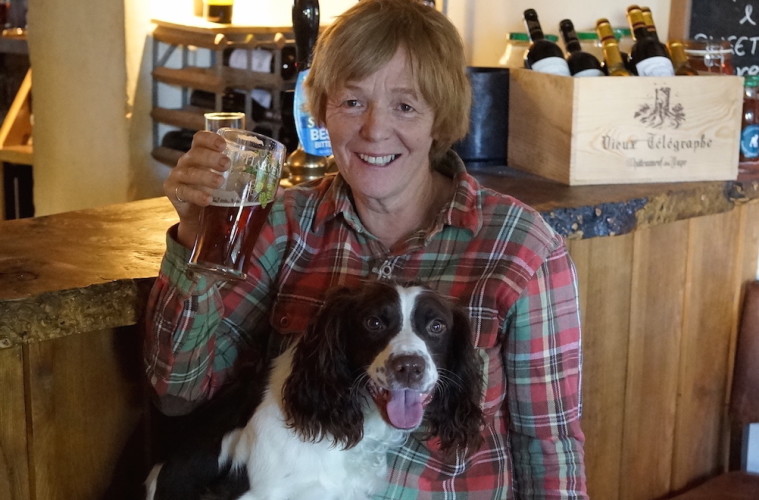 We need to make Brexit a positive opportunity for all

Soft brown eyes regarded me reproachfully. This stern look was not the joyful greeting that I’d pictured. I’d been away to San Sebastián for three days visiting middle daughter who is learning Spanish.

During my absence Tilley had paced around looking for her errant companion and on my return she demonstrated her disapproval. I did miss her, but I’m unrepentant ‘cos I had some good girlie fun. I’ve noticed that since returning home Tilley’s taking no chances, she’s sticking to me like glue.

I’m getting used to being reprimanded. According to my eldest daughter it’s my fault that we got such a low exchange rate, sterling to Euro’s. Middle daughter said she wished she’d taken more time to talk some sense into me! Youngest daughter says ‘old people have acted irresponsibly and shouldn’t have been allowed to vote because they won’t be around to bare the consequences. Was she referring to me? Many years ago I vaguely remember thinking that anyone over the age of thirty was ancient but as birthdays pass, the goal posts mysteriously move! Maturity creates wisdom, doesn’t it? It’s good to see democracy in action. Personally, I think Brexit will work out for the best, given time. The Referendum has certainly raised the profile of politics and has been more entertaining than the soaps. Everyone needs to calm down and make Brexit a positive opportunity for improving the lives of all that live here.

It’s good to see democracy in action. Personally, I think Brexit will work out for the best, given time. The Referendum has certainly raised the profile of politics and has been more entertaining than the soaps.

Thrashing out a UK Agricultural and Environmental Policy will be no easy task. The wisdom of putting Andrea Leadsom in charge remains to be seen. She is reported to be in favour of reducing red tape, saving farmers time, which is admirable. But alarmingly, she also supports ‘making food cheaper.’ Any system that advocates selling food for less than it costs to produce is a crazy idea! I don’t like the sound of the analogy ‘it’s like putting a fox in charge of the hen house.’ Let’s not prejudge her. I’m hoping that she will heed sensible practical suggestions. Owen Paterson could give her good counsel. Ideally we need a system in which family farms and rural communities are able to thrive. The innovative creation of an easily accessible pathway for younger entrants to join the industry would be useful.

Talking of pathways whilst in Spain I found myself trekking on the El Camino de Santiago. Pilgrims have walked this way since the 10th century to the shrine of Saint James. Apparently doing so was traditional penance and pilgrims received an indulgence to remove the penalty of their sins. I’m not sure I can claim that! It was tough walking rewarded with beautiful scenery.  I hadn’t previously appreciated that Spain is such a mountainous country. I also swam in the Atlantic Ocean, initially it was cold. The flotilla that my daughter suggested we swim to looked ‘do’able.’ but it’s a while since I’ve swum in the sea. I did wonder if this was my retribution for voting Leave! I was relieved to reach our goal and resolved to be less ambitious swimming-wise in the future. This proves that age does not guarantee ‘more sensible.’

It would be rude not to embrace the Basque Country culture, so we delighted in visiting the crowded bars drinking Txakoli a slightly sparkly white wine and sampling the tasty Pintxos that were placed along the bar. Although it’s not the most hygienic practice, it appears to be the ‘norm’ and consists of canapé type foods which are always accompanied by bread. You order your drinks and help yourself to Pintxos. When you are ready to leave you simply tell the barman what you’ve had, and pay up, it’s incredibly trusting! There was rarely enough space to sit down. A few bars did cook to order which is probably better. A typical breakfast consisted of toast topped with seasoned grated fresh tomatoes eaten at tables outside cafes and much more restful.

In town there were many small independent businesses, fruit and veg shops, fishmonger, cheese shop and those selling  ‘take away’ croquettes. The ice cream parlours were frequented by us, delicious! They all seem to be busy, so I wondered if supermarkets have less hold over here. I understand that the young are finding getting a job difficult and tend to stay on in education. On our hour long journey back to the airport I observed mostly forestry, some terraced vineyards, several  small vegetable growing plots with polytunnels, a few small herds of cattle and some sheep. A handful of traditional farmsteads and a sight I’ve not seen for many a year, a lone figure on a hillside turning hay with a hand rake. I didn’t see any olive groves but I’m told much olive oil is produced. My youngest works in procurement for a fruit and vegetable business and tells me she buys oranges, easy peelers and grapefruits, direct from growers in the Valencia and Huelva regions of Spain. Whereas lemons are sourced from the Murcia area. No wonder she enjoys visiting the growers.

It was a pleasant 27 degrees in Spain, whereas at home today it’s 33 degrees. I was amazed to hear Matt Baker on Countryfile describe summertime in the British countryside as ‘long lazy days, dappled sunlight and lush green hills.’ No time for laziness around here! The countryside is a hive of activity. On our farm it’s a race to get the hay making done and bales shifted before we start harvesting. I bet our sheep are glad to have been shorn. The lambs are growing well and we’ll soon think about weaning. I’ve sprayed up some lambs feet for scald. The cattle are gleaming and the calves look content, perhaps Matt was referring to their lifestyle.