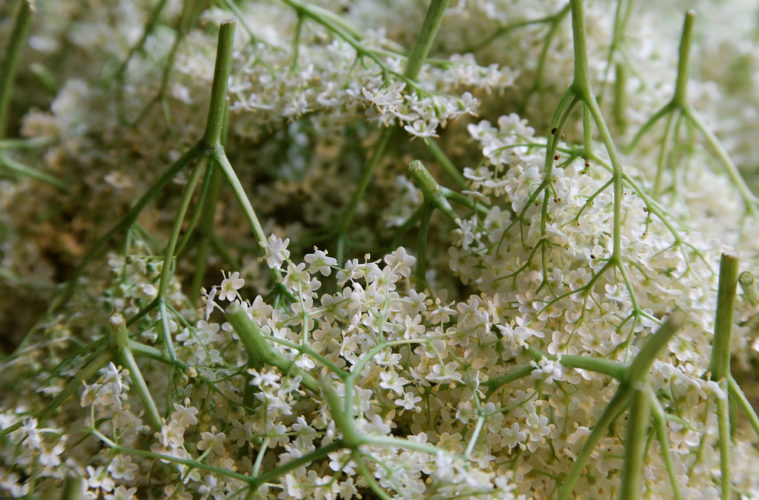 If you go for a walk anywhere in the countryside at this time of year there is one plant that you can’t fail to notice – the Elder tree.  Amidst the vivid summer greenery the elder blossom is instantly recognisable…

Hundreds of tiny creamy white flowers are held in flat disc-shaped clusters that remind me of tiny galaxies of sparkling stars.  The scent of the tree is also very noticeable, being sweet, sometimes cloying and overpowering, and quite distinctive.

The Elder has four characteristics that make it excellent for foraging:

As well as the edible flowers and berries, Elder has another useful characteristic.  The pith can be removed from the young branches leaving a hollow tube of bark that can be made into a simple  kind of whistle or flute.  The Latin name Sambucus Nigra refers to a Roman musical instrument played by shepherds called the Sambuca, presumably made from Elder.  The English name Elder is from the Anglo-Saxon word Aeld, meaning fire, because the hollow bark tubes were used as blowpipes to blow on glowing embers to revive a dying fire.  I have not yet tried to make a musical instrument or blowpipe from an Elder branch yet, I will have to give it a go sometime!

The Elder has a long tradition of folklore associated with it.  It is supposedly the tree on which Judas hung himself after betraying Jesus, and has thus been linked to bad luck and witchcraft.  There was a widespread belief throughout Britain that you should not burn Elder wood inside your house, or use the wood to make anything for use within the household.  This restriction was not particularly onerous as Elder does not burn very well, and is not very useful for carpentry!  But its association with magic and the devil gave it a certain power.  Hearse drivers would use an Elder handled whip, and charms and amulets could be fashioned from the wood.  In Scotland there was a belief that Elder only grew on a spot where blood had been shed, although Elder is much less common there than it is here in Sussex, where if this belief were true would indicate that it was a very violent and bloodthirsty county!   Interestingly the flowers and berries were not considered bad luck, the flowers being hung up inside houses or around the heads of teams of Oxen as they had the effect of repelling flies.

There is a very interesting fungus that grows solely on Elder trees, the Hiraeola auriculae-Judae, or Jew’s ear.  It is called this because it resembles an ear growing out of the tree, and because of the Elders traditional association with Judas.  These fungi are not uncommon, and they are edible, having a gelatinous but not unpleasant texture, and are best added to soups and stews.

Elder has long been used as a medicinal plant.  John Evelyn, a very influential physician writing in 1664 called it ‘a catholicon against all infirmities whatever…If the medicinal properties of its leaves, bark and berries were fully known, I cannot tell what our countryman would ail for which he might not fetch a remedy from every hedge, either for sickness or for wounds…The buds boiled in water have effected wonders in a fever, the spring buds are excellently wholesome in pottages, and small ale in which Elder flowers have been infused is esteemed by many so salubrious that this is to be had in eating houses about our town.’ Earlier still, in 1644 a Dr Martin Blockwich produced a 230 page treatise devoted to the properties of Elder called ‘The Anatomie of Elder’ that was popular enough to go through several editions.  This was not just folklore – Elder Flower Water (Aqua Sambuci) is an official preparation of the British Pharmacopoeia, used for mixing medicines and as a vehicle for eye and skin lotions.

As well as medicine, Elder was used in cookery.  The young buds were pickled in vinegar and apparently tasted like capers, as described by Charles Carter in ‘The Compleat City and Country Cook’ 1736.  More well known are the drinks that can be made from Elder.  Elderflower cordial is most peoples introduction to the plant, and really does taste of summer hedgerows.  the internet is full of cordial recipes so I won’t give one here, but they are very easy to make and well worth trying.  More complicated but with equally good results if done properly are the wines, which can be made both with the flowers to give a delicate, floral white wine, and the berries which give a rich red wine.  In the 1700’s cheap elderberry wine was often mixed with real red wine to bulk it out and increase the profits of unscrupulous wine merchants.  Aubrey (1626 -97) tells us that ‘the apothecaries well know the use of the berries, and so do the vintners, who buy vast quantities of them in London, and some do make no inconsiderable profit by the sale of them.’  Elder wine, both the flower and berry varieties, remained very popular through to the 1930’s in England, and many people still make them today.  Again, it is easy to find a recipe if you are interested.

So when you notice an Elder tree, remember all the uses to which it can be put, and the rich folklore associated with it, and I hope you will be inspired to try out some recipes.