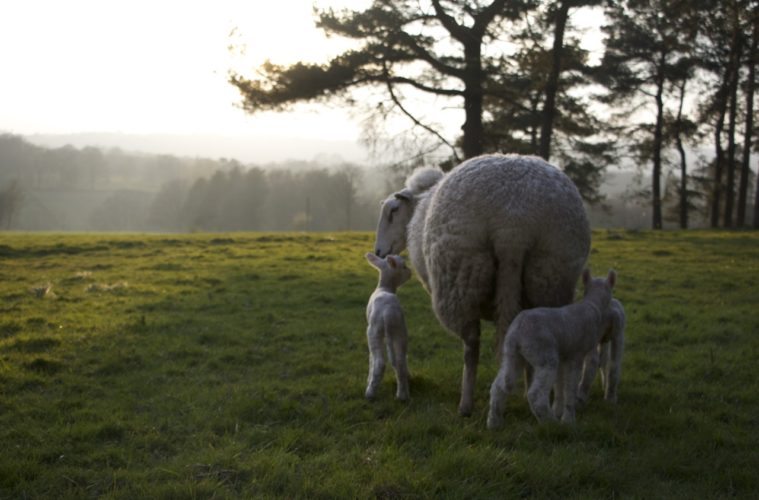 Plaw Hatch Diaries: April and May

This month it’s a double ‘sheep’ bill from Gala Bailey-Barker who’s been busy looking after her growing flock at Plaw Hatch (with help from her team of German bottle feeders)..

Lambing was very fast this year, most of our lambs were born within two weeks and within three weeks all of the ewes had lambed. The ewes were in Home the nearest field to where I live and as the grass was coming through slowly I moved them into the neighbouring field, Plaw Hatch Bank, 48hrs after they lambed. The ewes need a good diet post lambing to produce lots of milk for their lambs.

Eight of our first time lambers had singles, most of them managed themselves but some of the lambs were truly gigantic and the ewes needed a little help. I encouraged a ewe with a single to adopt a little triplet lamb. She seemed quite happy with her two lambs for the first 24hrs but then her enthusiasm wore off and she started to push it away. The size difference between the lambs was quite comical so it wasn’t that surprising that she became suspicious.

During lambing I check the sheep at dusk and at 5am each day. I have only had a handful of ewes lamb between these times and this year was the first time I lost a lamb in the night. The only challenging birth I had to assist with was no. 65 who had triplets. The lamb that came first was dead and I was already quite late to the scene so I quickly pulled the first lamb out and then the other two who were thankfully still alive. The lamb at the front had been dead for some time. It always amazes me that these little healthy lambs can live in such close proximity to a dead one. Although it is always very sad to lose a lam, it’s part of the job and more than compensated by the joy of the healthy births, and watching the flock grow or bringing an ailing lamb back to health.

We now have 65 lambs, of which we are bottle-feeding 7.  Bottle-feeding is a delightful activity until you have to do it for an extended period of time and I am lucky to have a team of dedicated bottle feeders. Katarina and Barbara both volunteers from Germany have been particularly wonderful at feeding the lambs amongst all the other jobs they help us with.

My favourite addition to my lambing kit this year was a gas stove and a kettle. When I was concerned about a ewes labour I could make myself a cup of tea and watch for a while. I spent some lovely evenings watching the lambs running and jumping together. As it gets dark the ewes often anxiously try to get their lambs to stay with them. It can be very funny watching them bleating and fusing over their lambs until the lambs decide to suddenly sprint off, if sheep had arms they wouldn’t get away with such antics.Two of my previous bottle-fed ewe lambs had their own lambs this year. It makes me feel very proud, they are both very good mothers and gave birth with no assistance at all.

A month after lambing I was horrified to find a large healthy male lamb dead without apparent cause. It transpired that he had succumbed to some kind of clostridial disease. As I’m sure many of you know, most farmers vaccinate all ewes shortly before lambing against clostridia and various other diseases which means they pass the immunity on to their lambs. In my time at Plaw Hatch we have never done this and we have never had any problems. Clostridial bacteria lives in the soil and can multiply very fast in warm mild weather, like we had at the beginning of May. Lambs love to nibble and scratch at the soil so I moved them into a field with very little exposed soil and drove down to the vet for the vaccine.

We vaccinated all 120 animals the next day, which was quite an experience and I was very grateful for first Barbara’s help and then Debi who thankfully was able to field questions from the school group visiting the farm. If we had vaccinated our ewes in the autumn we would only of had to vaccinate 54 sheep once. When you vaccinate the the lambs and ewes in the summer you have to do it again 4 weeks later. So wish me luck… Hopefully I won’t stab myself in the hand so many times second time around.

I have to give a huge shout out to the whole garden team who helped me move my bundle of uncooperative ewes and lambs between fields with very little complaint although there were a few suggestions that I should get myself a sheepdog. I am beginning to be persuaded although the idea is somewhat intimidating.

The other challenge this year was shearing. We had a few fly strike cases and as with all organic flocks we limit our use of organophosphates, so had to shear earlier than I would have liked. When ewes are sheared soon after lambing their wool doesn’t come off so easily, which means the shearers are more likely to cut them. If I am honest I am sometimes confused as to what practices are in the best interest of the sheep. Is it better for the ewes to be sprayed with a chemical to keep the flies off until June so they can be sheared later, and then sprayed again a month after shearing to cover them for the rest of the fly season, or shear them earlier than is ideal for them but use more organophosphates? Another issue is that if we sprayed before shearing, we wouldn’t be able to get our wool processed organically as there has to be at least a year between the last fly spray and the time when the wool is taken off.  I continue to puzzle over this and hope next year the strike starts later so I can delay shearing.

Yesterday I sheared my first sheep! Our ewes were all sheared last week by our trusty crew of professional shearers. Due to one thing and another the ram and Lenny (the rams companion wether) didn’t get sheared so I did it myself. My technique was interesting to say the least but I got them both sheared with only a few little cuts between them and they seem to be enjoying their new coats!

This year I had my first attempt at shearing myself. Auke the shepherd at Tablehurst, our sister farm, lent me his 12volt battery powered shears and with George to help me when they started wriggling, I set to. My technique was very unconventional but I got them both sheared fairly cleanly. I sheared the ram first and he kept making noises like he thought he was going to die but stayed very still. Lenny, our whether, who had never been sheared before wriggled quite a lot, but we got there in the end and I felt quite excessively proud of myself. I am definitely going to take myself on a shearing course.

The flock are now thriving and I’ve moved the ewes and lambs off the main farm for the summer to the land where 3 years ago we lost 13 out of 22 of our ram lambs in a dog attack. The recent National Sheep Association survey of dog attacks concluded that most dog attacks happen on private land and are committed by dogs that are not with their owners. They concluded that the main impacts that dog attacks have on farmers is anxiety, which I can very much identify with. I am aware that no matter how many signs I put up, however powerful my electric fencing and no matter how many local Facebook groups I write posts in, there is very little I can do to protect my sheep. We have some friendly neighbours who over look the land who are keeping an eye out and I shall just have to cross my fingers. So please keep your dog on a lead near livestock no matter how friendly and biddable they are!

Next month I’ll catch you up on all the cow, pig and chicken news. Thanks for reading!