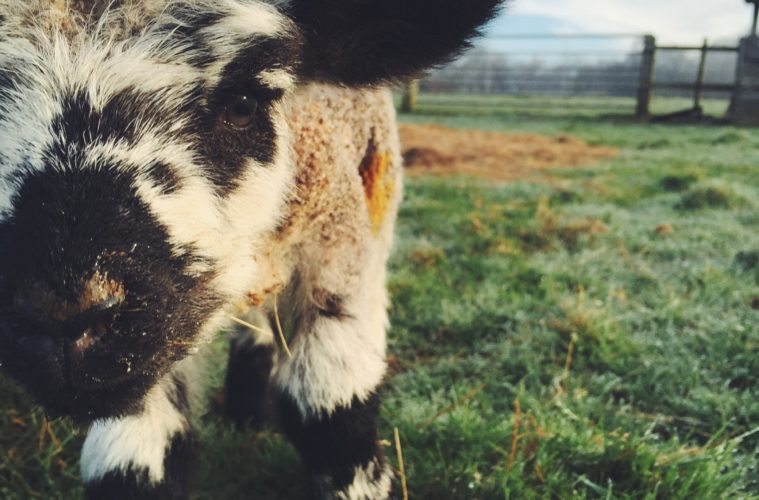 I’m afraid this isn’t going to have a huge variety of subjects as my previous posts but I will get back on track in the next one!

Well what can we say about April?? I was hoping for a month of more settled weather but alas it has been incredibly bizarre, yet again. Snow showers, wind and of course rain. My poor ewes and lambs have been subjected to all sorts! 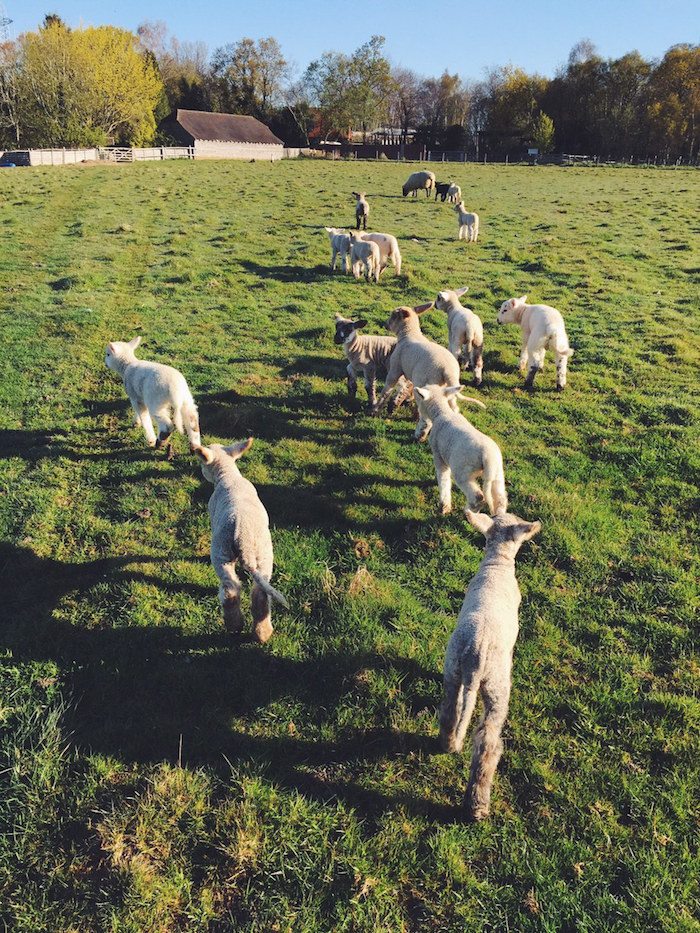 Lambing for me was all done and dusted within two weeks. I had 90% of the ewes lambed in the first week and then the last few at the end of the second week. They lambed well, with only a couple of hiccups and one very large hiccup in the form of Autumn and her lamb…

Autumn has been a pain for me throughout her time here, this was her first pregnancy and I have to say it will be her last! She prolapsed in the last six weeks which is the ‘normal’ time to see a prolapse, she came down with a mild case of twin lamb syndrome shortly after, then the morning of her birth she pushed the prolapse out again through straining.

She decided to be as awkward as possible for me and proceeded to make me follow her for a very scenic stroll around the field a few times at 5 in the morning before she allowed me to direct her into the nearest holding pen for me to sort her prolapse out. As I proceeded to sort out the prolapse, it soon became clear that the birth was going to be as tricky as her pregnancy. I could feel she had a case of what is known as ‘ringwomb’. This is a physical condition, the cause is unknown, as is a treatment for it. Basically it is when the entrance to the womb, at the beginning of the cervix, refuses to dilate as it should do. You can usually feel one tight inflexible ring, sometimes two, which you can hardly fit your fingers through let alone a lamb’s head.

Autumn, as per her character, decided to be completely different and give me three rings to deal with.. The first ring I could fit 3 fingers through, the second, 2 and the last, 1. I was at least able to feel for a lamb to see how far along she was, the lamb had yet to make his way down the canal so I gave her 50mls of calciject (a liquid calcium injectable) as this has, on the rare occasion, been known to help.. I will add it has not been proven, but when faced with this scenario, you look to try everything possible. I left her to relax and see how she went on.

I caught her up hourly to check development, none of the rings budged. On the final check I felt a nose and a foot present. Stage two labour had commenced..  The time had come and she still hasn’t progressed in her dilation.

So… manual manipulation was the next move, before I go on, I’d like to point out that a c-section is an option for some, I feel this is more of a stress and strain on both the ewe and lambs health, as a ewe overcoming a c-sec is a lengthy process, she will have to recover herself but also, if her lambs were left on her, she would have one or two mouths to feed.

So if I can help it, I will try my best to do what I can before I call on that final option. Had it have gone on for longer I would have called the vet.

I placed my hand in and started to gently open my hand in the first ring. If you think of yourself mimicking a bird’s beak with your hand, that’s what I was doing in order to stretch the ring out. As it started to slacken, I started on the second and lastly the third. All in all it took me about an hour to get them big enough to pass her lamb through, this was all whilst being kicked in the face and the stomach by Autumn, I told you, AWKWARD!

The lamb’s sac was intact thus far so he was safe, if the bag is unbroken and the fluids etc remain, a lamb can be left for up to 24 hrs, BUT, I would never ever recommend leaving a ewe and lamb for that long, if I know all is well and things are progressing, I will leave a ewe in stage two labour for a max of 4 hrs. This is with constant checking, I never leave a ewe on her own for too long. If she hasn’t progressed, I go in!

Eventually I was able to pull the lamb through and out, I was relieved to see she immediately adored him, thank goodness. After all of what we had both just been through, her rejecting it would have been the icing on the cake! 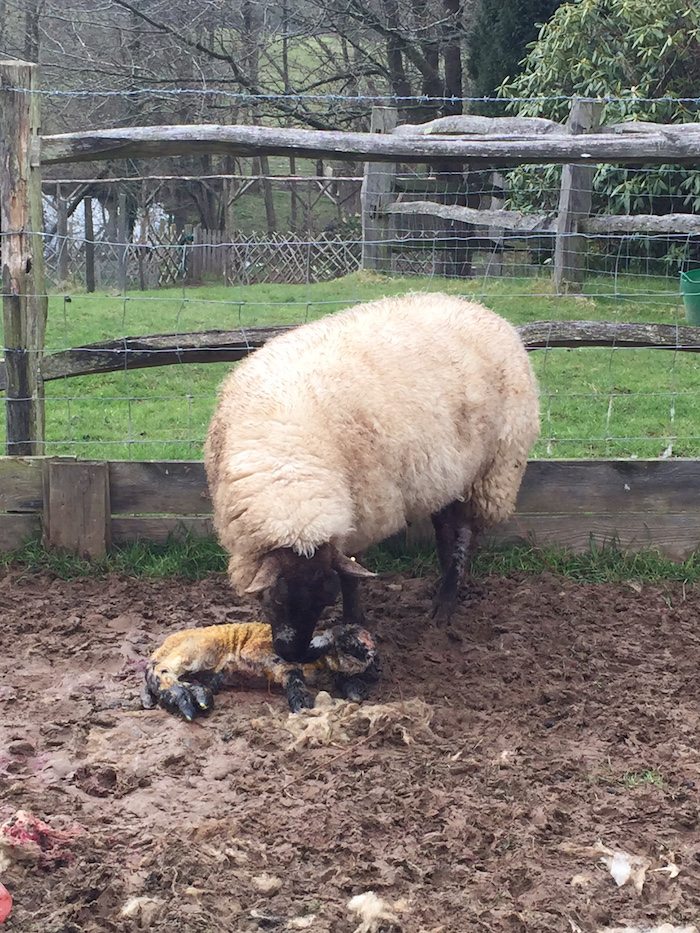 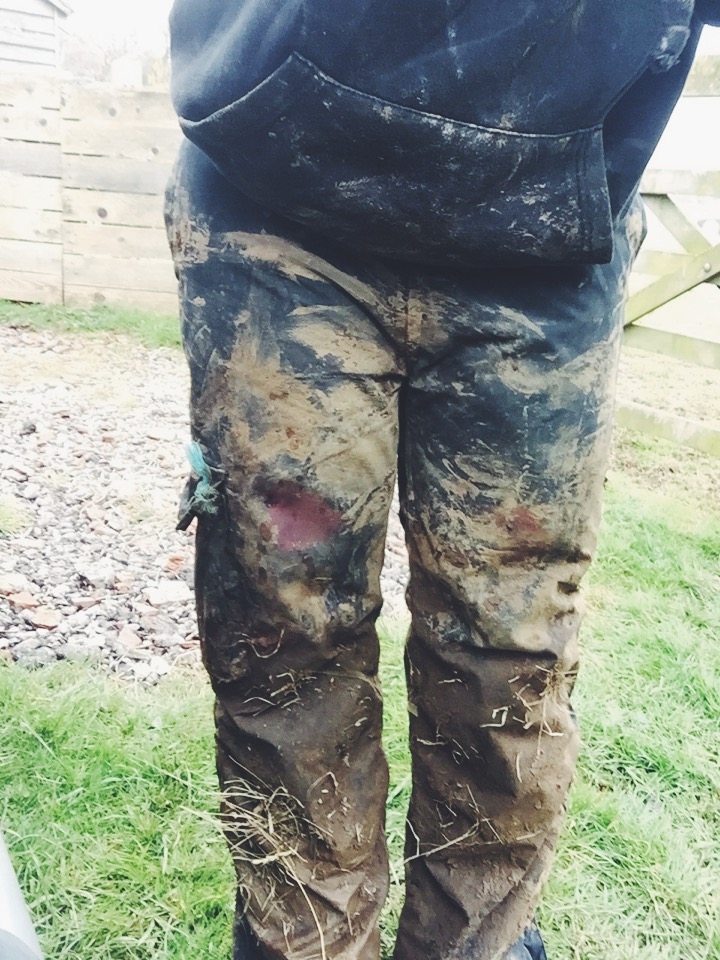 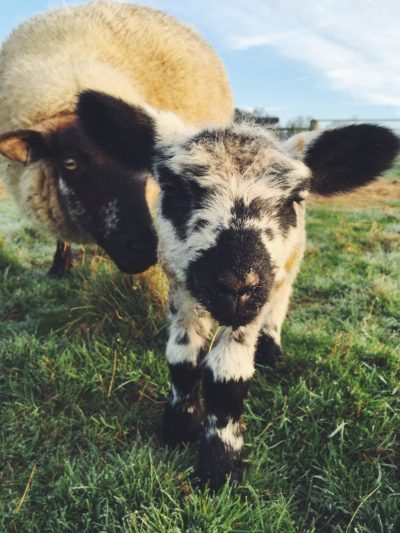 He is a very bonnie lamb, and my third heaviest, currently weighing 13kgs at 21 days old. 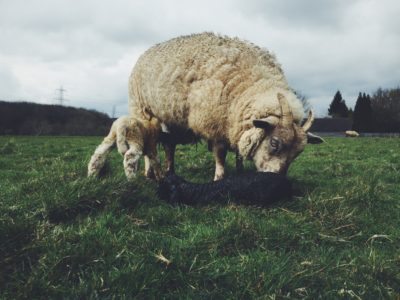 Cruella with Perdie and Blackjack

The rest of the girls all lambed well, I helped a couple but nothing much to speak of. I have two purebred Norfolk horn lambs, one ram lamb and one ewe lamb. I have kept the ram lamb entire so I can see how he grows. It was quite funny when he was born as his sister is snow white! Totally unexpected really! 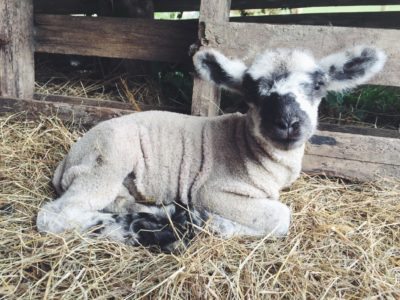 We sadly lost a tiny twin lamb, Ivan the Great. He was teeny, his dam should really have just had a single as she didn’t get that big, he was quite unexpected. He became very weak very quickly after birth, and I tube fed him his dams colostrum to give him a head start.

Unfortunately he was not to be, I treated and tried him with all sorts, but he was not destined to make it. I am quite disappointed in this loss but as I did everything within my power, I am trying not to take it to heart.

All the lambs are growing greatly, they have just had their first dose of wormer and vaccination, the second dose will be at the end of May, then they will just need an annual booster of vaccine and will eventually go onto the adults worming program. 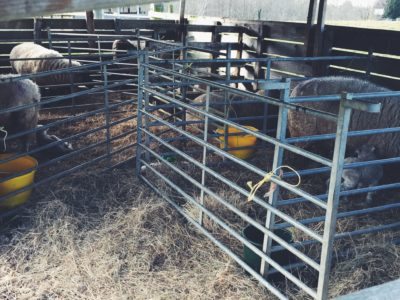 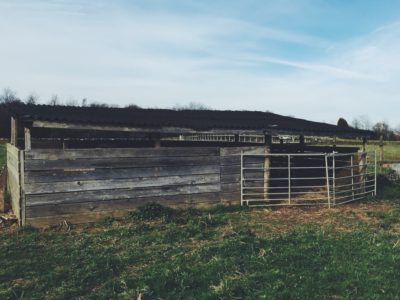 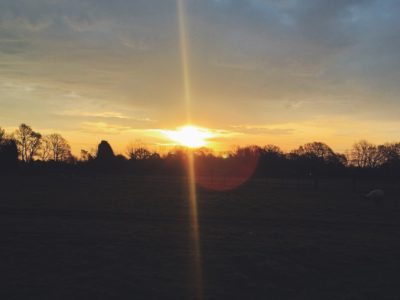 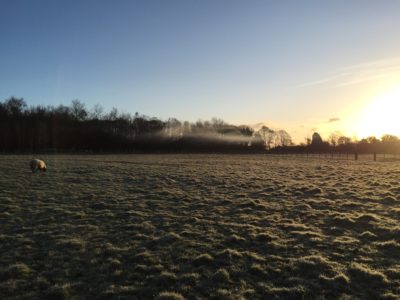 The ewe lambs and a couple of the wethers were shorn ready for the warmer weather. One ewe who I thought was empty was also shorn but to everyone’s astonishment, she filled up with milk a week later. I’m quite irate with her for not showing me sooner as really you shouldn’t shear a pregnant or feeding ewe as it can vastly affect milk quality and quantity. The rest were just dagged and they will all been sprayed with Dysect in order to reduce chances of flystrike, ticks and lice.

My blog has been a bit neglected over the last month or so, I apologise for this but I haven’t really had the time to sit still! I have recently added some reviews of companies who have been kind enough to send me through some of their products. Please go and have a nose! 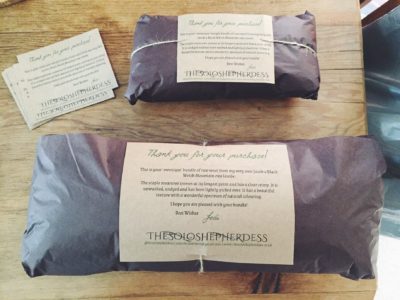 I am selling my Jacob x Black Welsh Mountain ewe lambs fleece on ebay, if you are interested in having a go at carding/spinning/felting some beautiful, undyed raw fleece, please have a look at my listing! 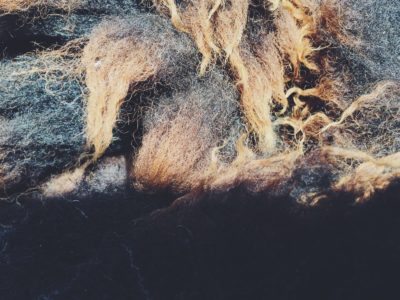 I turned my hand to fleece washing yesterday, it turned out amazingly well for my first go! I’m really pleased and have made a blog post on it on my blog. 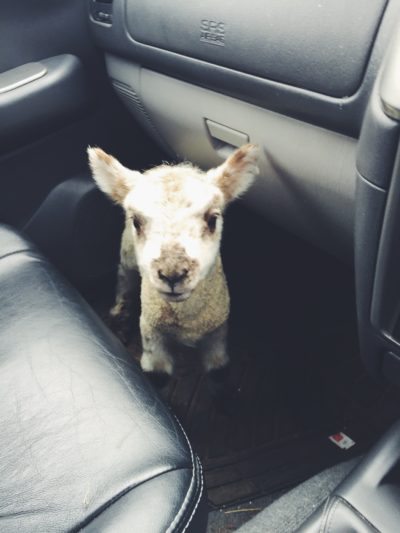 I also have a little happy story to tell, I went to see a friend of mine’s sheep and how they were getting on with lambing, there was a very beautiful little ewe sock lamb who had lost her mum, I knew as soon as I looked at her she would be coming home with me! 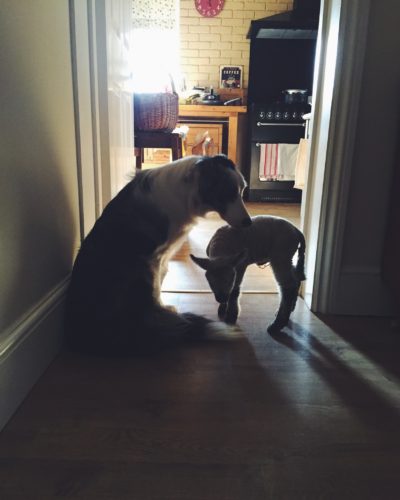 I called her Tilly and was confident I would be able to adopt her onto a  single ewe if I was lucky enough to catch her lambing.. Luck was on my side as 2 days later, No Name (Now called Nancy) went into labour.

I was ready with Tilly, her legs tied together in order to stop her running off. This may seem cruel to some, but if it was the make or break of her being able to have her own mum, needs must. She struggled to deliver her own ram lamb as he had a leg back, so I was there to help her and at the same time, smother Tilly in any fluid/membrane I was able to.

It was a tense couple of minutes as she got up and ran off. I walked away to give her space, dreading her not coming back. She looked at me and wandered back towards the two little wet bundles. I held my breath as she began to gently butt the ram lamb.. but eventually she began to lick him, one down! 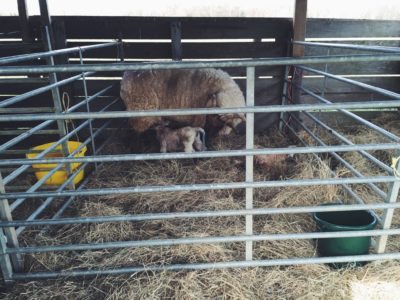 Then she started to lick Tilly… and Tilly, the monkey, managed to get free of her ties and walked away, she hadn’t even seen a ewe before, so I was very concerned that even if Nancy accepted her as her own, would Tilly accept Nancy as her mum? Suddenly Tilly turned round and started to try and feed from Nancy. Success!! And that was that, they have been inseparable ever since. 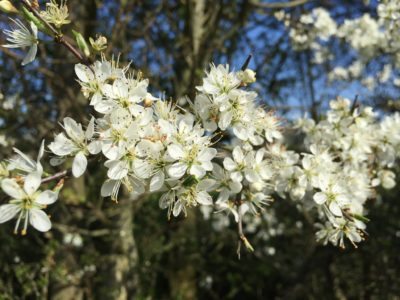 Outlook for May: This month the ewes and lambs will be moved onto fresh grazing, the ewe lambs will be integrated into the ewe and lamb flock when the lambs are a little older at the end of the month.

I am looking to start helping smallholders or owners of smaller flocks with their sheep as a freelance ruminant advisor and shepherdess, I am also available to help with people who are wanting to start in sheep but don’t know where to start! I’m very excited about starting this little enterprise as I love to help people and share my knowledge on an animal I am highly passionate about!

Another exciting event for me, comes in the form of my photo shoot and interview for my very own feature in the Readers Digest, bit nervous but looking forward to it nonetheless, so wish me luck for that!

Thank you for reading, I will make sure my post has wider range of topics in next month! 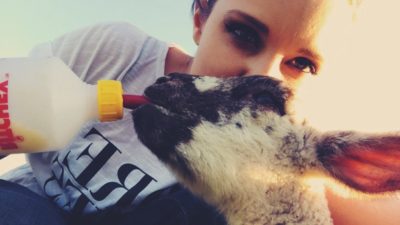 Tia Maria and I 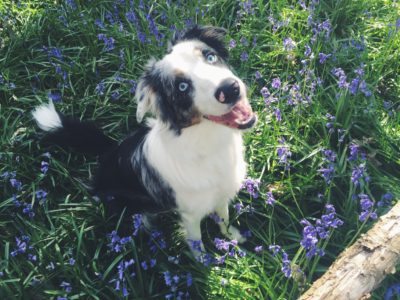 Bess in the Bluebells 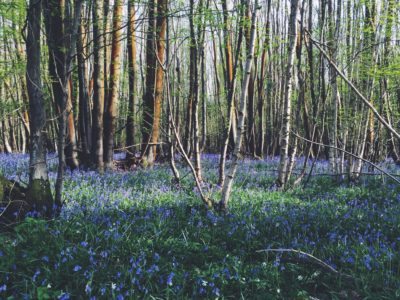 The Bluebell Wood in full bloom!