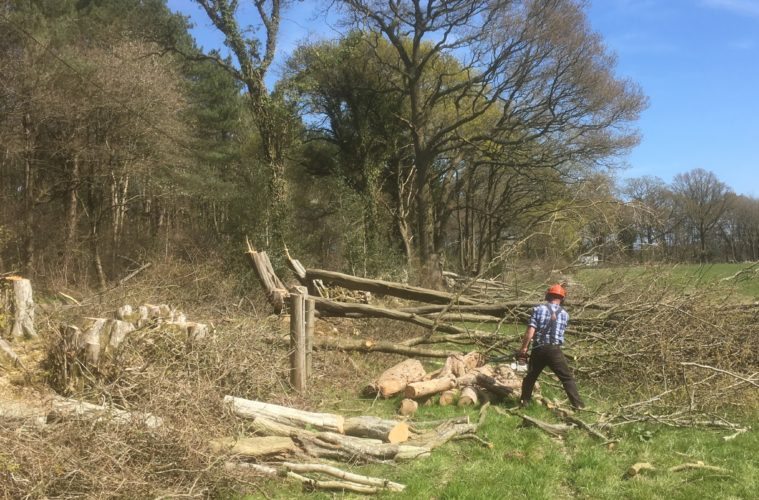 Trees being coppiced on a beautiful April afternoon

The popularity of Countryfile has shown the huge curiosity that the British public have with the life in the countryside and I feel that it’s important, as farmers, that we are open about what goes on behind the hedges and fences.

As the weather slowly improves it means that we can start to get on with many of the jobs that can’t be done in the sodden fields.  One of the biggest this year has been the boundary fence alongside the road which runs past the farm.  Ordinarily this wouldn’t cause too many complications but this section has an ancient hornbeam hedge running alongside.  However this hedge hasn’t been cut for around 60 years and was in need of coppicing before much of it falls onto the road.

This has caused many funny looks and a few comments from passing traffic as they see another tree being felled.  In fact, it was suggested by one driver that we were vandalising the countryside!  By coppicing the trees in this way we actually hope to improve the ecosystem as a whole by allowing the remaining trees to flourish and encouraging growth of smaller plant species at ground level.  The coppiced stools will begin to grow new shoots very quickly and begin the process that will see them felled for firewood in 60 years time, a process that has been happening here for centuries, as the hornbeam was used to fire the iron smelting sites that dot the local area. 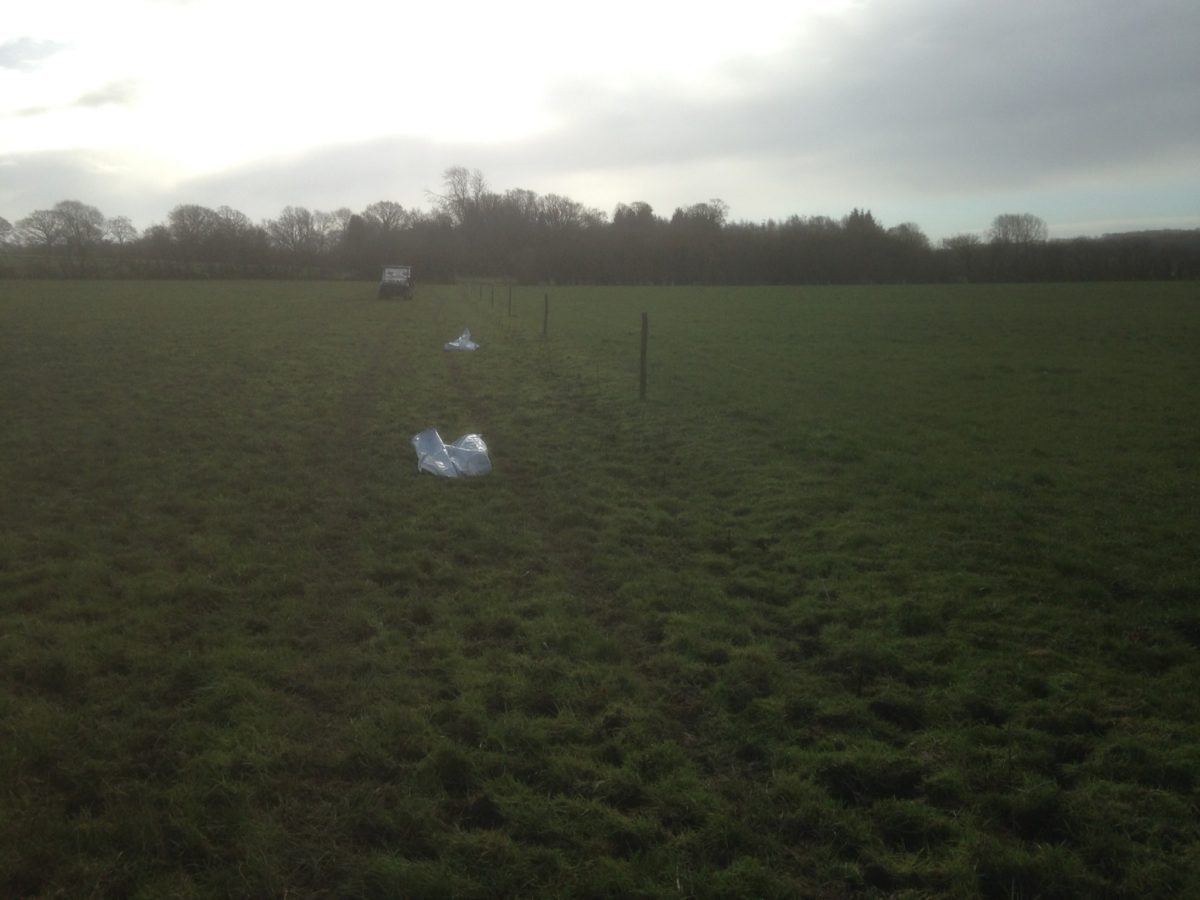 We have been planting more trees on the farm to keep things in balance.  We’ve decided to plant some willow along the fence lines in between paddocks.  This should provide some shelter for the cows, deeper roots to help break up the soil lower down and absorb water, and also eventually for the cows to graze.  I hope that the leaves will provide the cows with a mineral rich snack to keep them healthy.  It will also act as a wildlife corridor between some of the woods and existing hedges.

“One of my stated aims here at Cockhaise is to engage with our local community wherever possible.  I’m sure that most commuters here have wondered why they are stuck behind a large mob of cows running down the road, or the huge tractors that haul our grass into the farm during the summer.”

The popularity of Countryfile has shown the huge curiosity that the British public have with the life in the countryside and I feel that it’s important, as farmers, that we are open about what goes on behind the hedges and fences.  One of my stated aims here at Cockhaise is to engage with our local community wherever possible.  I’m sure that most commuters here have wondered why they are stuck behind a large mob of cows running down the road, or the huge tractors that haul our grass into the farm during the summer.  In order to answer many of these questions we run Open Farm Sunday every other year.  Preparations are now in full swing for this years event on 5th June, with an exciting line up of events and local food and drink to sample.

Although most stock are now out, conditions are still a little damp!

As each batch of animals leaves the farmyard for the summer, the noise levels decrease and we can start planning for the remainder of the year.  For the first time, my calves are now being managed by another farmer in Bolney, about 10 miles away, over the summer.  It’s a strange feeling not being in touch with my own animals and this means I must have 100% trust in the abilities and care shown to them by the other farmer.  Having seen them all last week I feel reassured that the care shown to them will match those they would receive here.

We had our annual TB test a couple of weeks ago and unfortunately had 6 cows who came back with inconclusive results (IR).  This means that they will have to wait 60 days before being retested, with any who are still showing this result having to be sent for slaughter.  In the 8 years I’ve been here we’ve been lucky that only one cow has had to tread this path, and every year we have a few of these IR’s who are then clear at the retest.  I can’t imagine the stress and heartache for farmers in the TB hotspot areas further West and North, who have to regularly send many cows to slaughter due to this horrible disease.  In these times of very low milk prices, this is very often the final straw for these farmers, who decide that they simply can’t continue dairy farming.

On a more positive note, we had all of our cows and heifers pregnancy scanned this month and had some fantastic results.  We hope to be calving around 250 of them in around 6-7 weeks starting in mid-August.  When my herdsman, Luke, arrived here 3 years ago we were calving them in around 15 weeks, so we set ourselves a goal of reducing this period every year and we’ve smashed those goals this year!  It will mean a crazy few weeks in the Autumn but will allow us to have some time off when they’ve finished. 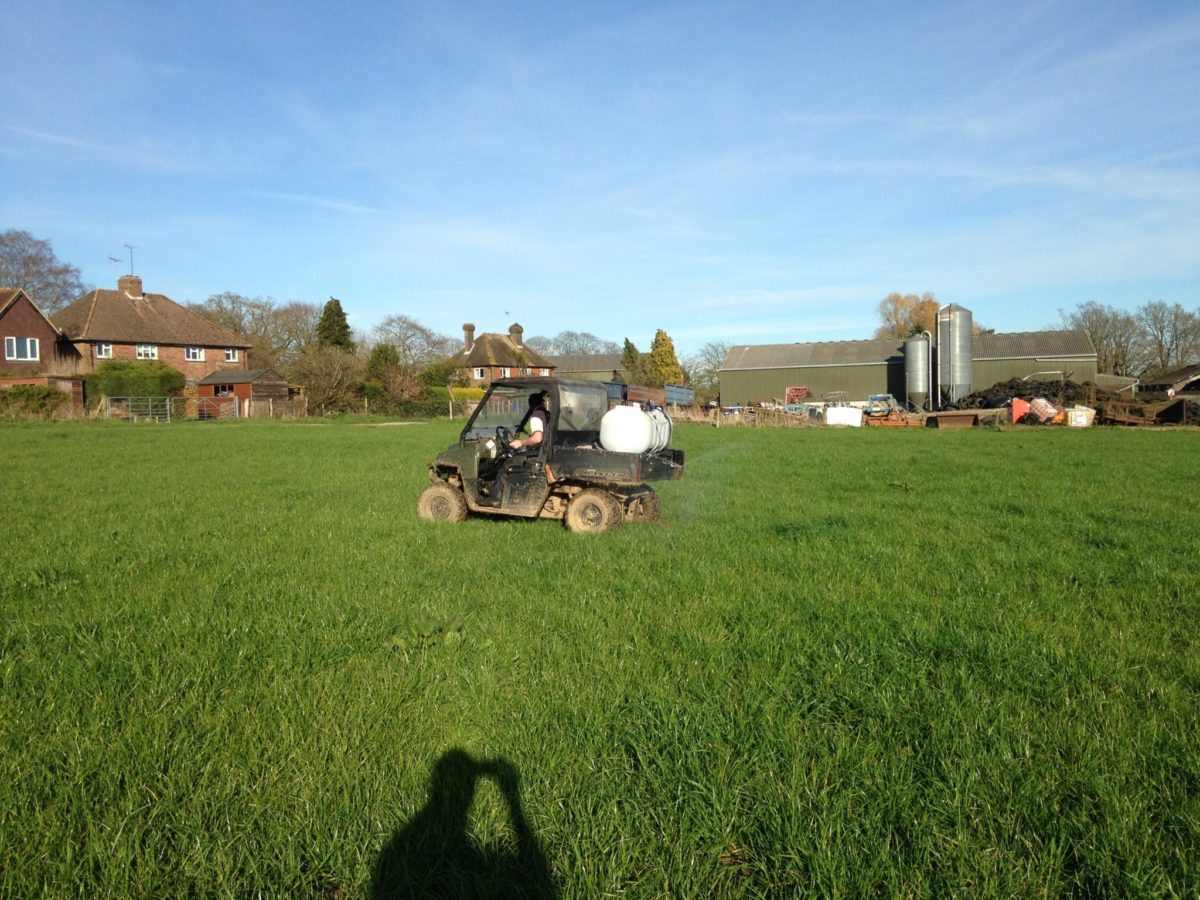 Our first application of bio-fertiliser

We are now in the second year of trialling our home made bio-fertiliser.  This is a foliar feed made up of cow manure, wood ash, milk, yeast, molasses and river water.  The idea is that the wood ash has many micro-nutrients in from the deep rooting trees it came from, and we now want to feed that to the plant and soil in order to make a healthier and more productive plant.  When we used it last year we had a fantastic amount of grass all year, but was this to do with the bio-fertiliser or just a great growing year?  In order to try to prove or disprove this, we will be spraying half paddocks to try and measure any difference in growth.  I hope to be able to post some really positive results later in the year!