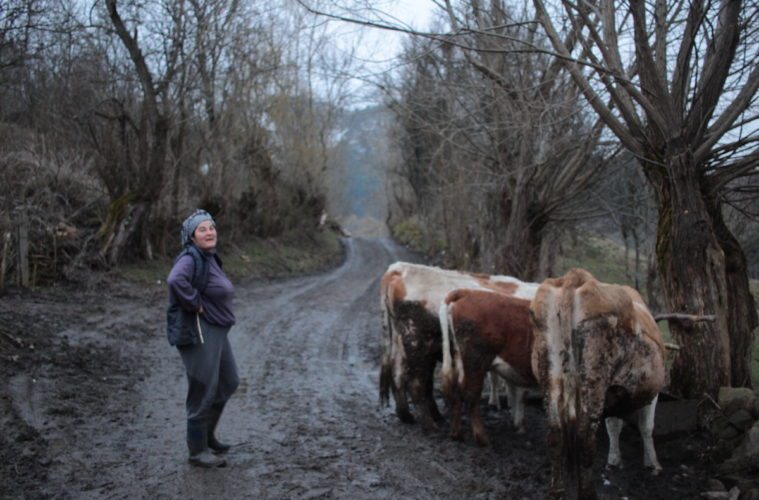 Peasants in Transylvania: A love note

The term ‘peasant’ is usually thrown about for a narrow range of situations, possibly while discussing medieval history or Communist eras, times being talked about in a rearview mirror.

Though many people shy away from the word and distance themselves from its negative connotations, there is a contemporary push to reclaim ‘peasant’ as something to be proud of, to be respected. In Transylvania, Eco Ruralis is part of this effort but the true driving force, though not necessarily in any explicit manner, is the peasant population itself. With its small but powerful organisation, Eco Ruralis advocates for peasants’ rights, land rights, and food sovereignty at both the national and international level. The peasant pride saturates their office as they distribute traditional seeds to their members and track land grabbers. I began to understand the pride and respect that deserves to be afforded this title only after witnessing the members’ peasant farms and listening to the peasant members themselves.

“Mia is part of the 30% of female agricultural holders in Romania and is equally imposing, but where her husband seems larger than life she exudes care and kindness.”

Eugen and Mia’s farm is partway up a mountain, providing sweeping views that are only partially obstructed by other rises and peaks, a faux pas that is easily forgivable. It is poised on the edge of Roşia Montana, a site best known for its tumultuous struggle against a gold mining company’s devastating proposal. Eugen is the most truly jolly human I have come across, a tall imposing man always on the brink of laughter even while discussing how they had to sell their horse. Mia is part of the 30% of female agricultural holders in Romania and is equally imposing, but where her husband seems larger than life she exudes care and kindness. The land includes her brother’s and sister’s homes, an array of barns, sheds, and out-buildings, fields, and a collection of abstract stone sculptures. Sitting in the field they refer to as their ‘courtyard,’ the sculptures were left behind by foreign artists many years ago and are simply too large to move easily. So, in typical peasant ingenuity, Eugen and Mia reclaimed them for more practical uses: one becomes an outdoor shower in the summer, another poses as a woodpile’s side pillar, and a couple make excellent scratching posts for the cows. On the slope above the houses lay fields for horses, an orchard, and the vegetable garden which, despite claims that the soil on the mountains is not particularly good, still manages to produce a large portion of the families’ consumption. 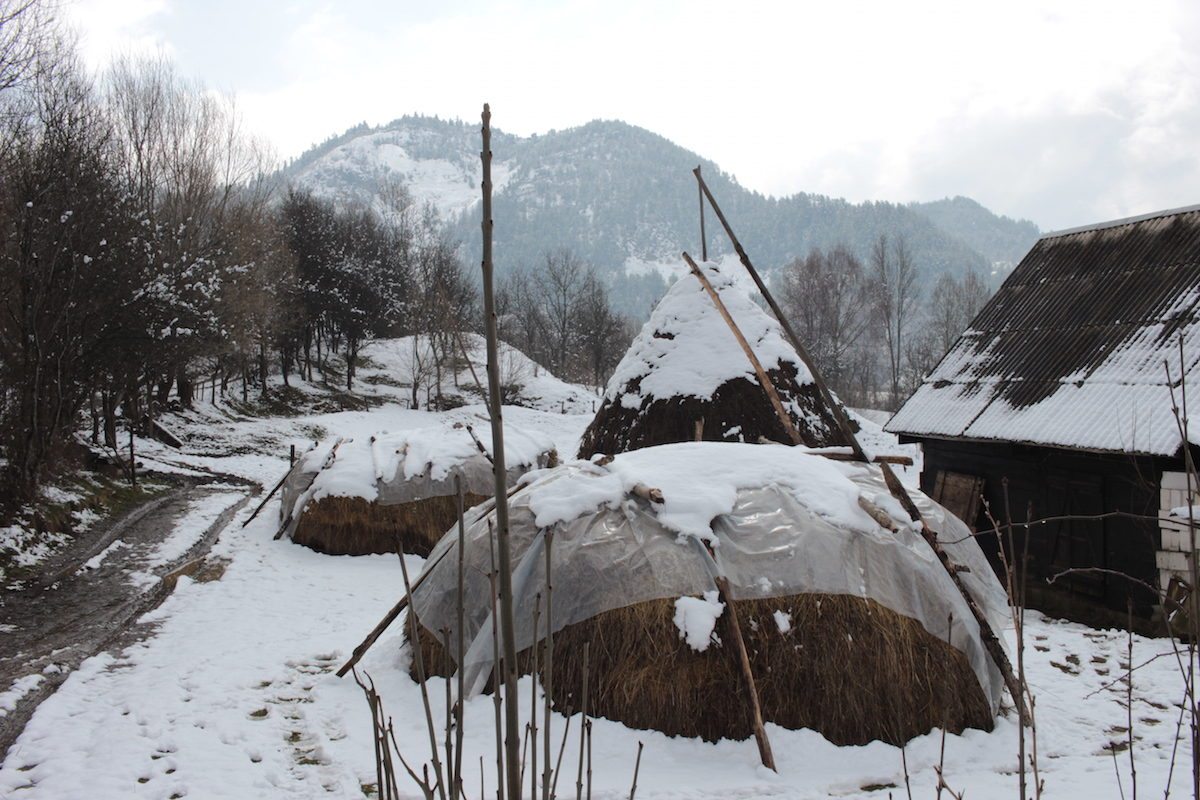 Romanian peasant farming, often referred to as subsistence farming by the EU, represents the majority of agricultural holdings in Romania, totalling over 75% even by conservative estimates. This means at least 2.75 million agricultural households only need to spend a fraction of their income purchasing food products. Robin Bors-Veraart, an American who has been working less than ½ a hectare of land in Alunişu with her family for 7 years, practically apologises when she admits that the lemons in our breakfast were bought at a store and probably shipped from an unknown producer, thousands of miles away. My giggle is halted as she explains that this year they are building a greenhouse where they’d like to try growing some citrus trees. The conversation continues to their hopes of purchasing a bit more land to grow grains and thus not have to purchase items like flour. She does this while sitting in the family’s cozy living room-kitchen-dining room, underneath which is nestled their root cellar with jars upon jars of tomato sauce, preserved jams, pickles, juices, cured meats, vegetables, and a plethora of other items all produced and processed in the fall by the family and their volunteers from WWOOF Romania, another one of Eco Ruralis’ activities. It’s hard not to smile: one of my favourite treats is Milka chocolate, owned by Kraft, and most likely imported thousands of miles with unknown additives and few recognizable ingredients.

“This is not a land of farming as a hobby or as a strictly monetary endeavour. The Romanian countryside is a place where agriculture is a necessary passion and the stakes are high.”

This is not a land of farming as a hobby or as a strictly monetary endeavour. The Romanian countryside is a place where agriculture is a necessary passion and the stakes are high. For most smallholders there is little monetary wealth to be gained from farming. A stunning 98% of Romanian farms are on less than 10 hectares of land, hardly enough for a substantial herd of cattle or sheep by most western countries’ standards. Yet in Alunişu, villagers not only raise livestock but sell meat, milk, and subsequent products in a self-sufficient, symbiotic circle. The villagers utilise the Commons, 3.4 million hectares of permanent pastureland owned by either the Romanian government or local communities, sending their combined cows, sheep, or goats out into rotating fields, thus bypassing the need to individually own large swathes of land. Milk from the animals is then bought by the local priest who makes exquisite cheeses which he in turn sells to locals, visitors, and tourists, and even me who is intolerant of dairy. When demand is great enough he even sends a shipment to the city an hour east. 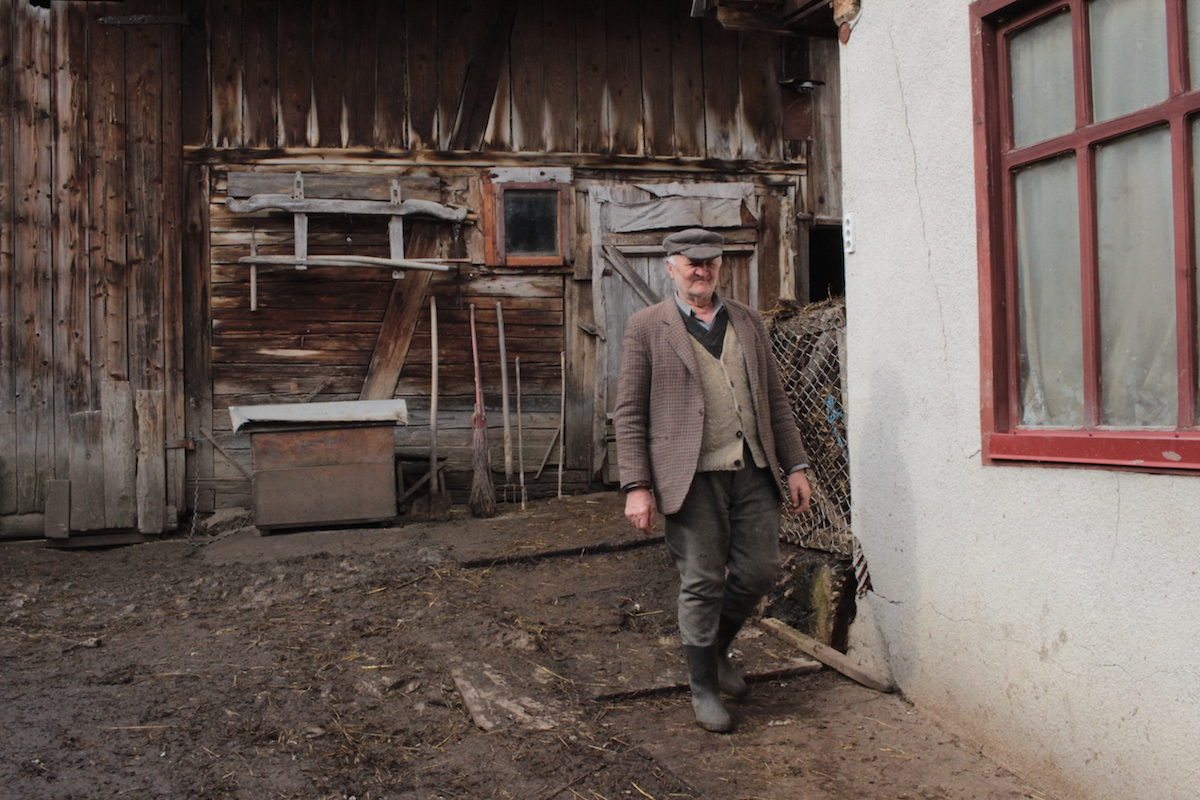 As picturesque as this scenario may sound, it is a precarious one. Free market trade and EU inclusion bring competitive prices and wider varieties. If consumers opt for highly processed, imported cheese then cheesemaker Reverend Szilard Berde is unable to purchase as much milk, the villagers are deprived of his financial support and may lack the funds to keep their livestock. Further complications arise over land tenure. Foreigners and Romanians alike are rushing to claim their chunk of the famous ‘chernozems,’ or black earth rich with nutrients that is now on the open market. Speculators, agribusinesses, and investment firms are scooping up immense plots, land grabbing in hopes of building profits unheard of by and unshared with the local people. Visible from Alunişu’s furrowed roads is a Chinese solar ‘farm’ that glares out from the otherwise rolling hills and greenery. It does not provide jobs or power to any of the surrounding villages. Meanwhile, Eugen and Mia have spent the past 16 years facing the possible destruction of their farm, village, and entire mountain by the Roşia Montana Gold Corporation. For some, the lure of cash is either too tempting to deny or a downright necessity in times of strained finances. Stories abound of peasants using the money for a wedding or house repairs or even health-related expenditures, but the money always runs out, and quickly. Without the long-term wealth provided by agricultural land, the peasants are left worse off than when they started.

The consequences of the land rush are already being felt. Prices have skyrocketed, accessing available land is difficult, competition is fierce, and environmental degradation is on the rise. Despite these encroachments, the Romanian peasants carry on, with a combination of determination, stubbornness, and joy, building and sustaining their communities. Dan Cismas, the owner of a farm in Ţopa, explained, “Farming at a small scale, makes that human interactions are kept alive, people are tied to each other and it develops the spirit of the community,” and this spirit is felt throughout Transylvania’s peasant communities. Robyn’s husband Lars describes the hour between the end of the daily farm work and when the livestock are herded back into town, when villagers gather in the streets to talk, laugh, and perhaps share the home-brewed liquors pálinka or țuică in the pause. Imagining the summer evening heat, kind words and well-earned relaxation is enough to make me nostalgic for something I’ve yet to experience, in the most cliché way. 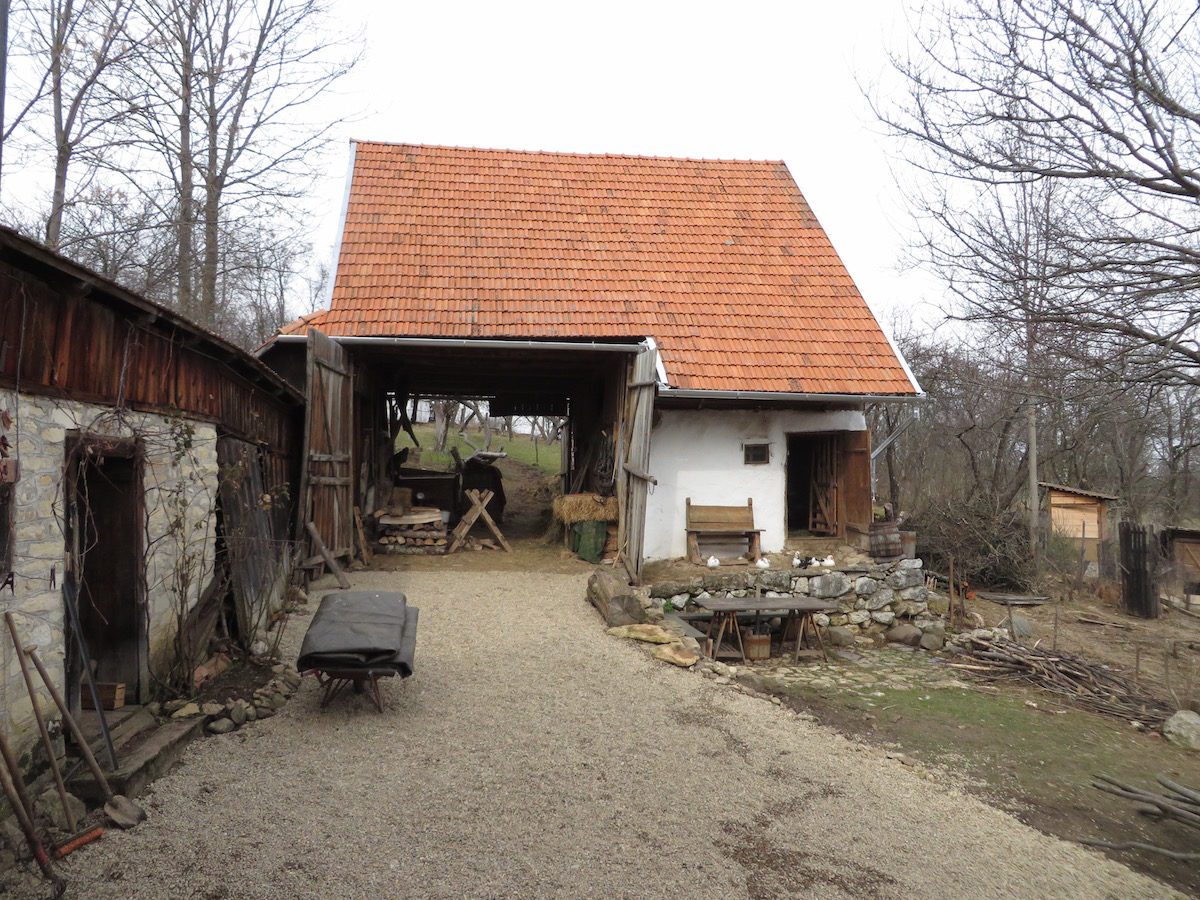 I get a brief taste of this in Roşia Montana one evening. After eating an incredible meal of almost entirely homegrown food we follow the cows into the milking barn, a dark, warm wooden structure with a ceiling nowhere near high enough for Mia or Eugen to stand. There are 3 calves born in the last few months, one of whom still gets partially bottle-fed and makes quite the delightful spectacle of himself. Trudging down the muddy lane back to the house, Eugen and Mia banter. Inside there are drinks, friends, sweets, and warmth. Down the road is the village where signs and banners proclaim the benefits or destruction of gold mining. Further out across Transylvania, and Romania at large, peasants are doing the same as Eugen and Mia while monocultures and agribusinesses loom nearby. There are certainly plenty of dangers and problems, but the farms and peasants continue.