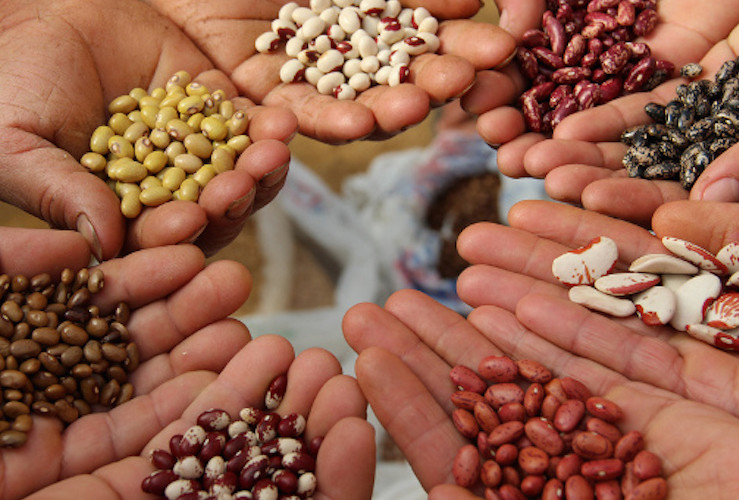 For thousands of years seed saving was common practice for farmers and growers, as fundamental as maintaining soil fertility and crop husbandry. It was the norm for farmers to select the plants most suited to their land and collect the open-pollinated seed from the best plants.

This selected seed adapts to the climate and soil type of that land, known as a landrace. This leads to a hugely diverse living bank of seeds that constantly adapts to changes and results in resilient plants that have an ability to tolerate stress caused by environmental pressures.

Unfortunately, since the uptake of modern F1 hybrid seed, whose offspring do not produce traits true to the parent, and cannot therefore be saved to reproduce reliable crops, farmers’ landraces have dwindled. F1 seeds produce vigorous, uniform crops, but breeding from them leads to offspring with lack of vigour and lower yields.

This commercial advantage was taken on board by the fertiliser companies who began breeding seeds and adding them to their catalogues.

The first Plant Patent Act came about in 1930 in the U.S. and led to large agricultural companies, who bred hybrids (along with manufacturing chemical fertilisers and pesticides) being given some legal protection for ‘their’ seeds.

These companies pushed the hybrid vigour of these seeds and farmers became reliant on them just as they had become reliant on the fertilisers and pesticides that these same companies were manufacturing. The Green Revolution saw farmers become dependent on this modern way of farming and they lost the more traditional skills of rotation and seed saving.

It is estimated that since the 1900’s around 75% of plant genetic diversity has been lost due to farmers relying so heavily on hybrid seed. [2]

As farmers, growers and a nation of amateur gardeners, we must reinvigorate the skill of seed saving and take back control of our seeds and ultimately, our food system. This is one of the first steps of food sovereignty: “the right of peoples to healthy and culturally appropriate food produced through ecologically sound and sustainable methods; and their right to define their own food and agriculture systems”. [3]

By continuing to save and breed seed varieties that are locally adaptable we can begin to reverse this loss of biodiversity and build up a constantly evolving living seed bank. It is of paramount importance that we work to bring back life to the skill of seed saving and set up networks amongst farmers and growers to start breeding more open-pollinated seed varieties, which can be exchanged amongst local groups and used commercially.

It’s our belief that farmers should have the right to saving, sowing and exchanging their own seeds, the Landworkers’ Alliance and the Soil Association came together in October 2014 to host Save Our Seeds, a two day event held at Embercombe in Devon. It gave farmers and growers an insight into the history of seed saving, current legislation and a practical workshop to show how simple it is and how little is required to save seed.

This event saw the launch of the South West Seed Savers’ Cooperative, a seed saving network amongst growers and farmers in the South West of England. The basic idea of the SWSSC is that each member saves open-pollinated seeds, even if it is just from one variety of crop. We will gather in the autumn to share our seeds, so that each member comes away with many more varieties and can become less reliant on hybrid seeds bought from seed companies. The members will gradually be breeding varieties that are locally adapted and so will produce more resilient crops with a greater genetic diversity than if they were to use hybrid seeds.

The SWSSC will continue to host workshops and events to help members relearn the skill of seed saving. Practical advice and guidance will be given to members, and farm visits will take place to learn the technicalities of seed saving. The intention is to have local groups all over the UK.

If you are a grower or farmer in the South West of England and wish to be a part of the South West Seed Savers’ Cooperative please contact ashley@trillfarm.co.uk.

A version of this article first appeared in The Ethical Consumer