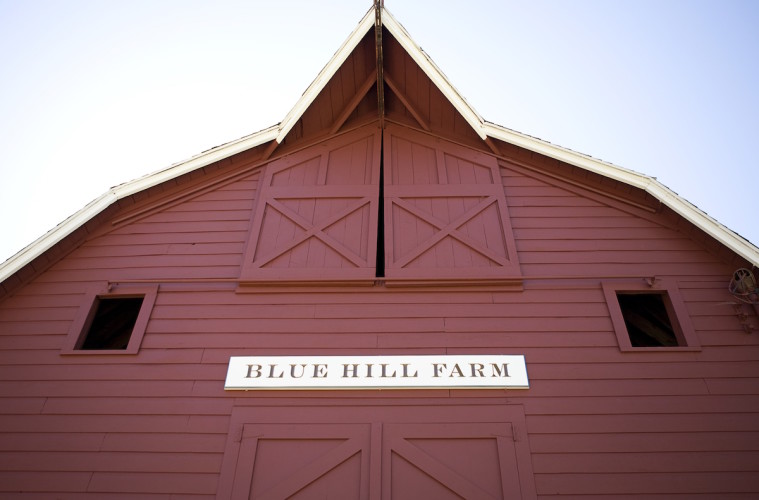 The Third Plate: Field Notes on the Future of Food

To get the full sense of Dan’s agricultural, culinary and philosophical ride through time and space (he’s a first-names-kind- of- guy) you may have to read the book yourself (large format paperback; 447 pages). 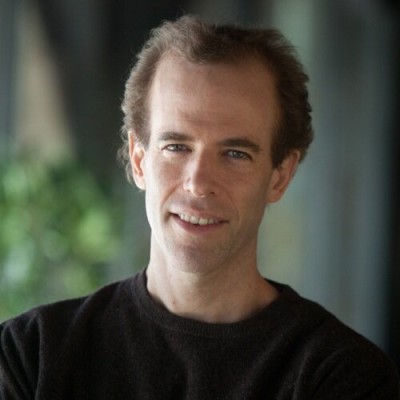 Reading the book feels a bit like being buttonholed by an articulate stranger.  He  describes his job (manager and head chef of 3 restaurants called Blue Hill, in and around New York, one with a small farm attached), then segues rapidly into the state of food and agriculture. He quotes from nature and ecology writers, and has a seemingly inexhaustible supply of colourful anecdotes featuring his wide circle of friends and contacts.

Quite a challenge to summarise, so I will focus on some key points and highlights.

What is The Third Plate?

The first plate, Dan explains, is traditional white American cuisine: heavy on steak-based protein and refined carbohydrates. The second plate is where we are now; chefs cooking free-range/organic steaks, seeking out new ingredients and incorporating some seasonality, which we try and emulate at home. The third plate is  what he offered when challenged to come up with a vision of food for the future. Specifically, the plate contained a carrot steak and a sauce made from cheap second cuts of beef. For Dan this represented a new cuisine completely, one that would aim to cook all cuts of an animal and place them in second position to seasonal vegetables and whole grains. 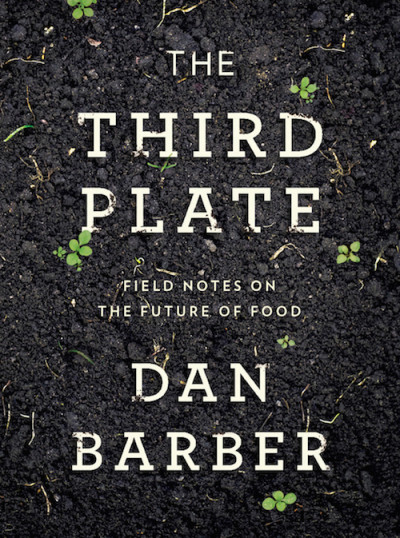 But to understand how he got to that I think it helps to identify two fundamental questions that Dan asks throughout his (extensive) explorations. First, he asks what agricultural practices produce the best food. Second, he wants to show us how to replace the idea of food as fuel, with an approach that celebrates taste, flavour and nutritional value.

The book provides answers and suggestions. Four sections: Soil, Land, Sea and Seeds, follow a lively introduction, and the whole seeks to explain a new cuisine “to reflect what the landscape can provide”.

Soil and Seeds: agriculture and the “grain heroes”

Dan argues that the word agriculture ties food to place:‘agri’ (food products) are intimately related to ‘culture’. Farmers, home cooks and chefs create an idea of food whenever location is not  (for a retailer or chef) “just another ingredient” . This food culture ‘community’ is what really fascinates him and inspires his own cooking and farming.  To start with I want to focus on his “grain heroes”. Farming here in the UK, I found his account of them particularly relevant, and he writes about them more than any other food producer in the book.

Glenn Roberts, a California miller with a special interest in heritage grains, runs Anson Mills and  supplies Dan’s restaurant and farm. Culture was what got Glenn started . He grew up in  California,  but his mother came from South Carolina and she despised Californian rice. So he hunted for old grains, cereals with names like ‘Eight Row Flint’ (corn) and Antebellum Style Rustic Coarse Graham (wheat flour) . His mission to discover the red rice of his mother’s youth took him (and Dan) to a small family farm in South Carolina, established since the 1600s, that was almost completely self-sufficient in food (they made some money from moonshine liquor). This family had turned the principle of agribusiness on its head. Crammed onto their land were uncountable varieties of plants and many different livestock. After eating with the family Glenn reported  to Dan on the “unreal impeccable flavour” of the meal. With the family’s help he tracked down his mother’s ‘Carolina Gold’ rice and also some delicious corn grits bred by native Americans  (though in order to sell it back in Napa Valley he had to rename the grits polenta!). Ultimately Glenn’s research led him back to an age-old agricultural practice: landrace farming, whereby several varieties of grain are planted at once and allowed to cross-pollinate and evolve into new varieties naturally. 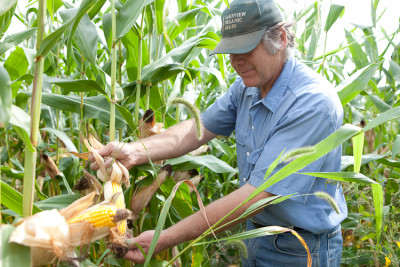 Another of Dan’s grain heroes is Klaas Maarten, his main feed supplier for Stone Barns (the restaurant’s farm) whom he met in England at Jody Scheckter’s farm in 2005 (see book for detail!). Klaas converted to organic in 1994 after he suffered an attack of herbicide poisoning that made him disabled for a time,  planting an organic crop of bread wheat that only a Mennonite neighbour would buy. However, he persevered, focusing on soil health through rotations and an awareness of “the smallest livestock on the farm” (soil organisms).(1) His neighbours began to notice his healthy crops and converted themselves. Together, and helped by the meetings  organised by his wife Mary-Howell (a plant scientist), they formed a community that grew and developed over time and now farms five thousand acres. What hugely influenced this shift to organic was Klaas’s decision in 2001, to invest in ‘Lakeview’, a local mill and dedicate it to organic grain processing. Gradually more and more diverse grains got grown and processed: triticale, oats, barley, rye. The standard feed mix produced at Lakeview contains nine different grains. Mary-Howell believes that  “a diversified diet means more amino acids, more minerals, less acidosis” and obesity researcher John Ikerd, argues that it is only a matter of time before research will demonstrate what Albrecht argued, that nutrition derives back ultimately to a healthy soil. And for Dan, the proof is in the eating, at least by his pigs, who have thrived on Lakeview’s mix.

Clearly Dan is anxious to get across the message that diverse cropping and thus the preservation of a wide range of seed varieties is crucial for the sake of nutrition and flavour . The fight is also on if we are to avoid a situation where plant-breeders like Monsanto control all the grain varieties available to growers.  And this takes us to his third grain hero, Steve Jones, and the exciting Bread Lab. After twenty years work on Washington State University’s main wheat breeding program Steve clashed with management when he refused to work with Monsanto to back their plans for a patented Roundup resistant wheat. (2)

The university moved him to Skapit Valley, an effective demotion that actually turned out to be a stroke of great fortune for him and the local farmers. Just like him, they insisted that any breeding programs funded by the university had to be in the public interest, and  what ensued was a renaissance in local grain. Steve also, and this is unusual for a grain breeder, had aims above and beyond chasing the highest-yielding wheat variety. He wanted a compromise between yield, resilience (to varying conditions on the ground) and – the most unusual bit – taste and flavour. (3)

Having worked on the science of ‘agri’ Steve then turned to the culture part. He persuaded the university to fund a new sort of laboratory. The Bread Lab had the tech: moisture machines, varying pressure grinders, alongside the greenhouses stuffed with experimental varieties. What it also had, though, was bread ovens and a staff that included bakers, chefs and millers, all working together in a ‘bread community’ (which Dan calls “ a new kind of botanical ark”) tasked with discovering ways of producing the best-tasting workable wheats for the bread shop nearby…

I think what Dan seeks to achieve in the section entitled “Land” is to remind us that any rural landscape has natural features and a climate that should be reflected in its farming. As so much farming in the United States has imposed monocultures on the environment,  he visits Extremadura in Western Spain to see its ancient ‘dehesa’ of oak trees and pasture, and the animals these feed: sheep and Iberian pigs, out of which come the delights of ‘jamon iberico’and sheep’s milk cheese. Also (and this supplies lengthy digressions into nouvelle cuisine; traditional foie gras and the horrors of industrial chicken rearing ) this ‘dehesa’ has Eduardo Sousa’s wonderful ‘hefted’ geese. (4)  Half of these birds’ eggs get eaten by hawks, but Eduardo ensures that they range and eat to their hearts’ content, with a spectacular consequence for their body weight and the richness of their livers, which are sold for a fortune to chefs as natural foie gras. Dan compares the symbiotic whole of the dehesa and its produce to land as conceived by ecologist Aldo Leopold. With Leopold Dan agrees that “agriculture itself will always come into some sort of conflict with nature if we seek to control it”; like it or not we must develop an ecological conscience towards the land.

A serious account of ecological ruin and resource depletion is given in the section headed “Sea”. Dan visits Angel Leon in his restaurant on the mainland near Gibraltar where he celebrates the work of the local fishermen (the ones who do not break nature’s rules by deploying sonar detection methods evolved in the second world war, and nets as big as football fields). Angel wants his customers to eat all the fish caught (bear in mind that the ‘bycatch’ thrown back in the ocean approaches one quarter of all caught) and to recognise the role of phytoplankton (possibly somewhat analogous for a fish as soil is to a plant). So he puts everything on his menu: no fish or fish body-part is exempt, and he has set up a phytoplankton farm to provide the raw material for a sauce and a bread (according to Dan these taste of the sea, delicate but lingering and a complement for accompanying fish). Mention should also be made of Veta la Palma where Dan witnesses sea bass, mullet, eel and other native species being farmed in an extensive and sustainable way on an enormous area near the Guadalquivir River.

Where Do We Go From Here?

The Third Plate reminds us of the gulf between on the one hand the food and farming model dubbed ‘agribusiness’ or ‘factory farming’ and on the other, traditional farming practices working with nature. It reminds us that corporate and government interests are still largely committed to the machismo, big numbers and market-dominated ethos of agribusiness. Witness a contemporary mega-agriculture which reveals contempt for animals and pollution on an unprecedented scale.

A few weeks ago I attended the Oxford Real Farming Conference and I found many reasons, despite the pressures, to be optimistic about food and farming. People care about the issues and many are doing something about it! I met someone who is planning to set up a bakery in Pembrokeshire to produce bread from local grains and I listened to Andrea Ferrante whose passionate defence of smaller Italian food producers and campaigning for La Via Campesina (5) (200 million members worldwide!) has got the latter represented in UN talks on food security. Also present were the UK vegetable box growers, the organic farmers, the pasture-fed livestock devotees, Compassion in World Farming delegates, youthful members of The Landworker’s Alliance, Family Farmer’s Association members, ecologists, chefs and doctorate biologists: a community of people who want a renaissance in agriculture.

Maybe change is coming, we just have to be patient. In the meantime, Dan’s vision of ‘A Menu for 2050’ and his call to chefs, as well as his celebration of the community of farmers and food growers who can supply the ingredients for the future sustainably, is inspiring.

1 Klaas Maarten’s ideas about the soil’s fundamental importance were inspired by the early ecologist William Albrecht.

2.Patented seeds have to be purchased by farmers from breeders. Traditionally they have grown their seeds for planting or bought from within the farming community.

3. Worth noting here that Glenn Roberts tells Dan that not once was he asked to breed a wheat for its flavour

4. The story of Eduardo’s geese is a highlight of the book but not perhaps an easy farming model to replicate!