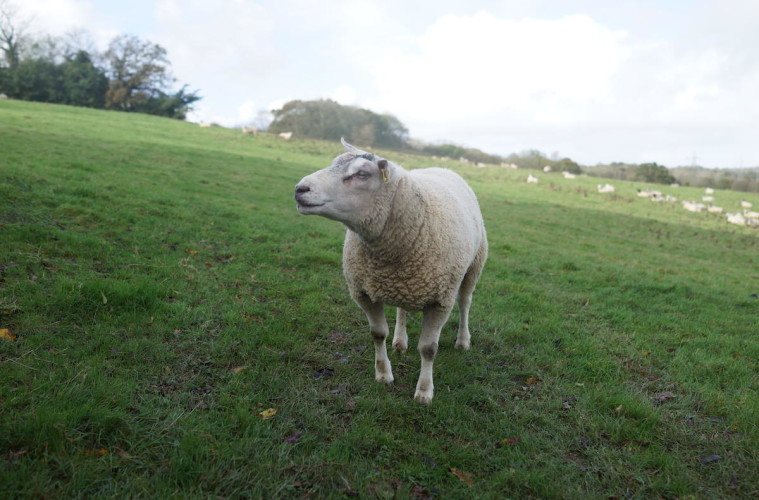 The price of lamb has lifted slightly, but not enough for my liking. I’ve told my sheep that they are living on borrowed time. I checked Asda’s shelves and noted that they still had Australian lamb, leg steaks at £12.90 per kg alongside British lamb leg chops at £11.43 per kg. New Zealand whole leg of lamb at £6.47 per kg and British 1/2 leg at £7.75 per kg. In Hailsham livestock market this week 18/11/2015 us lamb producers were paid an average 151 pence per kg live weight. With market commission, levy fees, transport and rearing costs to pay, you don’t need me to tell you that it’s tough. Yep I’m a farmer and I’m moaning, which may not be good for our image, but under the circumstances what do you expect! It’s all very well for the big wigs in the farming world saying we must present a positive message. But it’s no good pretending that all is flourishing when clearly it isn’t. ‘Tell it like it is’ that’s what I say.

I was intrigued when we recently attended the South of England Farming Conference to hear ‘what’s Holding Back the Next Generation?’ that none of them mentioned the problem of low prices. The speakers managed to put a positive spin on farming. Rob Hodgkins the young shepherd who described himself as a superhero was very enthusiastic. Worryingly he advocated borrowing maximum amounts of money, he is a braver man than me, but luckily I’m not a man! I was hoping that my son was not listening to that bit. Interest rates will not always remain so low or will they? Now I think I’m getting out of my depth. I did admire his enthusiasm and wish him luck.

One of the presentations ended with a slide saying ‘We don’t have to be sheep, we can do things differently’ I did think that if a sheep read this they could justifiably have felt offended. Some of my sheep definitely try to do things differently, and they’re usually the very ones that I swear about. I really think that sheep could do with being branded in a better light. I overheard a student who was helping out at a sheep fair proclaiming loudly, ‘I don’t like sheep they’re dumb creatures’. Which I thought was a rather sad reflection of their image. I rather like sheep, I wonder what the psychologists would make of that!

A good thing about shepherding is that there is never time to get bored. There is always something that needs doing. Even if the sheep themselves don’t need physical attention, there’s usually fences needing mending, equipment to be sorted, or paperwork to attend to. But even I admit sheep free time is sometimes beneficial. Have you ever noticed that if you plan to go out anywhere that seems to be the cue for sheep to get up to mischief. Sod’s law! They call it. That’s the only kind of law that my sheep abide by.

My rams are in now, we’ve been feeding them soaked sugar beet to get their energy levels up. So now they are out there practicing their pillow talk and generally having fun, doing what boys do best! I’ve purposely delayed putting them in with the ewes, to give us an April lambing. There seems no point in chasing an early lamb market, as these days there isn’t much of a premium to be made. Not enough to outweigh the extra expenses incurred. Although it is difficult to predict what the market will do in the future.

The Fat Stock shows are looming on the horizon. It tends to be trickier than you would think to find well matched animals. We always intend to start preparing them earlier but never do, maybe one day….It is not something that we take too seriously, but I like to enter into the spirit of the occasion. It’s good to keep these country traditions going.

Finally I have been writing this Sheep column for almost a year now. I feel it is soon time to hand on the pen to another shepherd. It is always interesting and refreshing to hear the experiences of others in the shepherding world, and their thoughts on all subjects to do with sheep. I’ve enjoyed sharing my sheep stories with you, and thanks to those that gave feed back. I entreat someone to take up the challenge I’ve certainly found it a positive experience. Roll up, roll up all you budding writers, they say there is a book in every person! So a monthly column should be no problem. If you are interested Contact Southern Farmers office 01580 241401 and speak to the lovely staff who will be delighted to hear from you.

A version of this story appears in the Southern Farmers newsletter