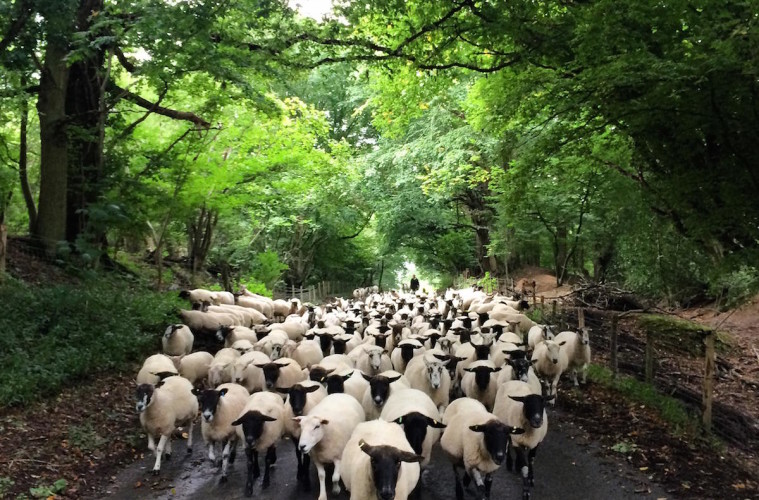 The mug given to me by my son has ‘Addicted to Sheep’ stamped on it. I question why he thought that appropriate? I’m definitely not impressed by today’s market prices as the rewards for all that shepherding work are virtually zilch. It’s like a slap on the face, reality check time. I’m struggling to muster enthusiasm myself, let alone give encouragement to fellow sheep keepers. All I can say is that we’ve seen hard times before and survived. so I guess we’ll have to do it again, or get out. 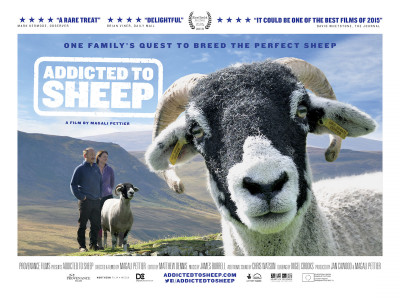 Addicted to Sheep, is a film that was launched in London recently. So if you haven’t had enough of sheep on your own farm, you can reward yourself with a visit to a cinema where you can relax and watch the Hutchinson’s from Northumberland with their sheep.

As for our own flock, the recent wet weather called a halt to combine harvesting and was an ideal opportunity to squeeze in some much needed ‘playing with sheep.’  Fred needs to get a taste of the real world occasionally. I fear that he was getting far too cosy cooped up in that air conditioned glass house surrounded by computers, sitting on his comfy seat, pushing buttons, earning money. It’s not good for his health, far better for him to be out in the fresh air doing ‘sheep work’ with me, loosing money.

This year I was alarmed at how suddenly the Clik fly repellant broke down on our lambs.  It had lasted for only 13 weeks and not the 16 weeks as claimed on the label. Although the weather was very humid. Overnight we had several well grown and tight wooled lambs develop patches on their backs, not the usual, flank, behind or shoulder strikes. We had to quickly gather and apply crovect. The ewes were also treated, although they were strike free.

We have finally weaned our lambs. That is apart from three of them, the ones that successfully leapt over the prattley hurdles. We shifted the ewes along the road to another farm a mile away. I think the ewes had reached the stage where they were relieved to be released from their motherly duties. Usually they kick up a din post weaning. There was no such noise this year, they all looked very chilled. Even Eeyore, who incidentally is looking very dapper and wasn’t bovver’d by being parted. 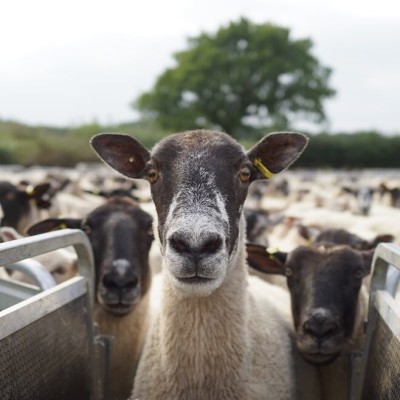 We have plenty of grass at the moment, although I fear that it’s loosing its goodness. The odd lamb is developing a dirty behind. I plan to get a worm count, just to check that we have that dept., under control. Many years ago our lambs had an outbreak of haemonchus contortis, with catastrophic consequences. I’m now paranoid about this particular worm in sheep and hope never to repeat that misfortune. We have for the first time given our lambs a pre weaning vitamin drench.  It will be interesting to see if it was money well spent or wasted.

At this time of year, lambs tend to browse the hedgerows  supplementing their grass intake. One such lamb managed by get itself wedged in a thicket of blackthorn. The area had stock fencing on either side of it. So how the lamb got in there is a mystery and extracting it was a mission. I had to use the chainsaw, to chop down the blackthorn enabling me to rescue it.  The lamb  was the recipient of some bluish language as it trotted off to join its mates. It gave not the slightest indication that it was grateful for my efforts or interested in my advice; ungrateful beast.

Maths was never my forte. It was decided (not by me) that I should get a better grounding in it, by Counting sheep in and out of pens. On 17th September 7,000 head of shearling, breeding ewes, lambs and rams, were traded at Dolphin Sheep fair Ardingly. It must be a logistical nightmare to organise. Much work is done. Keeping track of the paper trail, building pens, numbering to correspond with catalogue, unloading, loading, scanning, penning and sorting sheep. Market staff guided the Plumpton students, who were kept fit shepherding the lots to and fro the sale ring. We were lucky that the sun shone on the day, but it was wet and slippery underfoot. There was the odd mishap along the way, muddy encounters, uncooperative challenging sheep trying out their jumping skills etc, Generally it worked well. I was too busy honing my counting skills to get near the sale ring, at least this removed the temptation to buy. There were some good looking sheep passing hands.