Going under: the last fishermen of Sussex

In the darkness of 3.30am on the Stade beach in Hastings, Sussex, Paul Joy and his crew prepare to set out to sea cuttle-fishing. Engines grumble, wood creaks and the boat skids over shingle into the black water, the lights of the coast quickly fading into the distance. 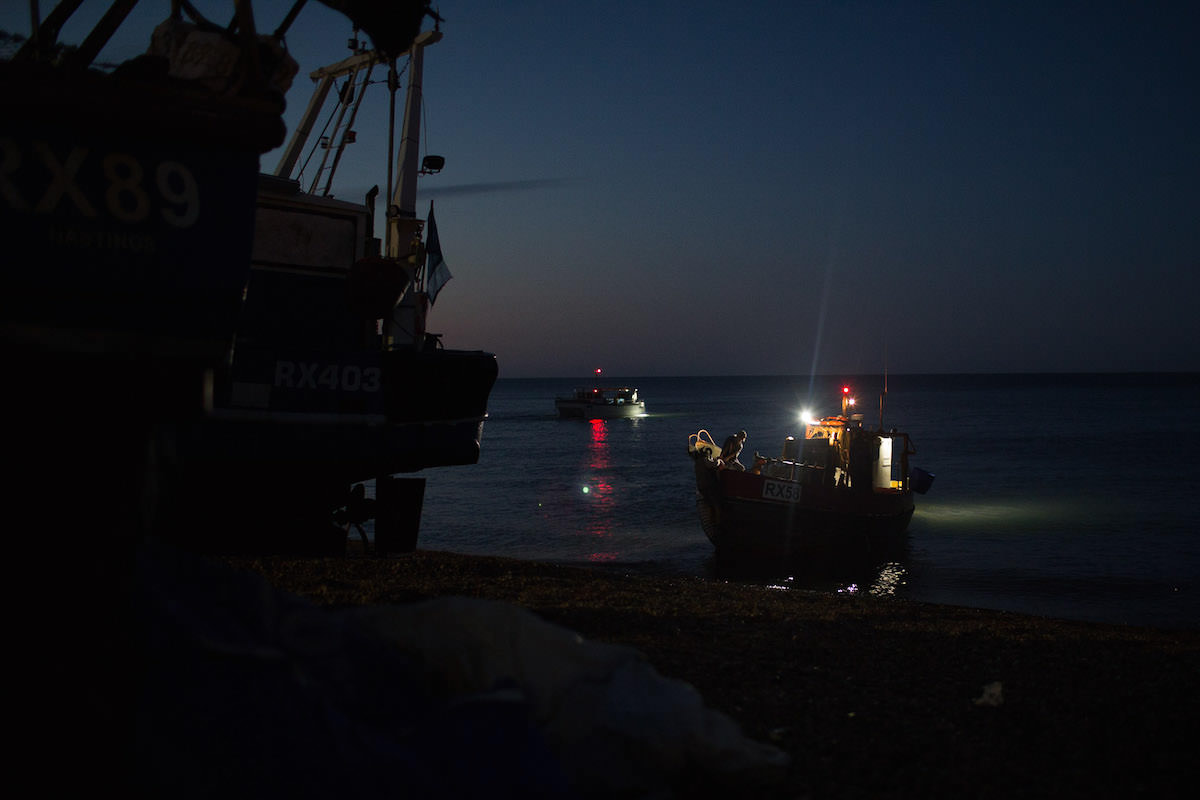 The fishermen repeatedly haul in cuttlefish traps from the depths, empty catch into boxes, separate males and females before replacing the traps under the surface of the sea. Sometimes working for seven hours at a stretch, their faces, hands and oilskins are splattered with black squid ink. Even at daybreak in summer, the damp air of the English Channel is cold and biting and the work is physically tough. 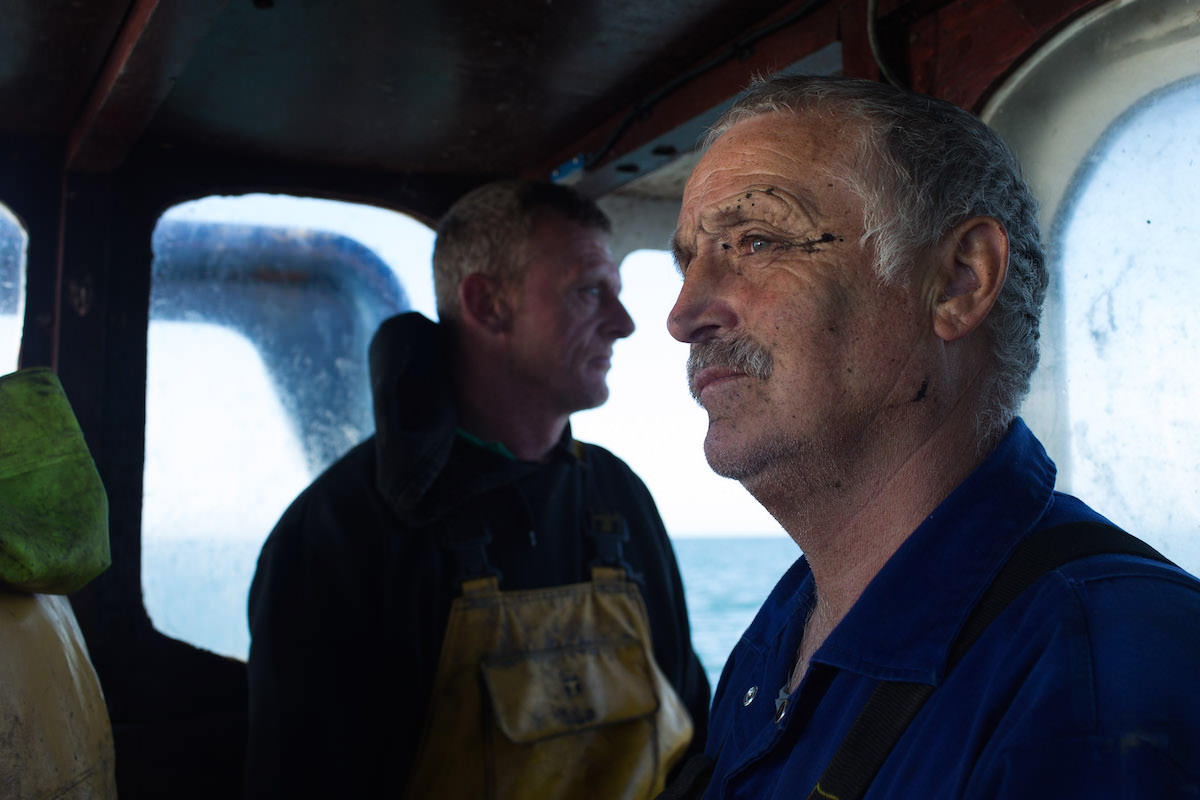 On Board ‘Kaya’ RX89. The fishermen homeward bound after five hours at sea. Photo: Sarah Stirk

For Paul and hundreds of other small fishing communities around the UK, it’s a way of life going back nearly a thousand years. But they say that they’re now struggling to survive, and if things continue as they are, they won’t last much longer:

“My sons aren’t coming into fishing, how can they, they want a life and they’ve got a mortgage,” says Paul. “How can you get them to become fishermen when you don’t have the right to keep the fish that you catch. And the rights have been given to someone else when we’ve been fishing here for 1000 years.”

In 2006 the European Union imposed strict fishing quotas, partly to protect “white fish“ stocks. But UK allocations are imbalanced, say the fishermen, in favour of larger operators, leaving “inshore” fishing boats (boats under 10 meters long) with access to around only 4-6% of the total fishing quota. 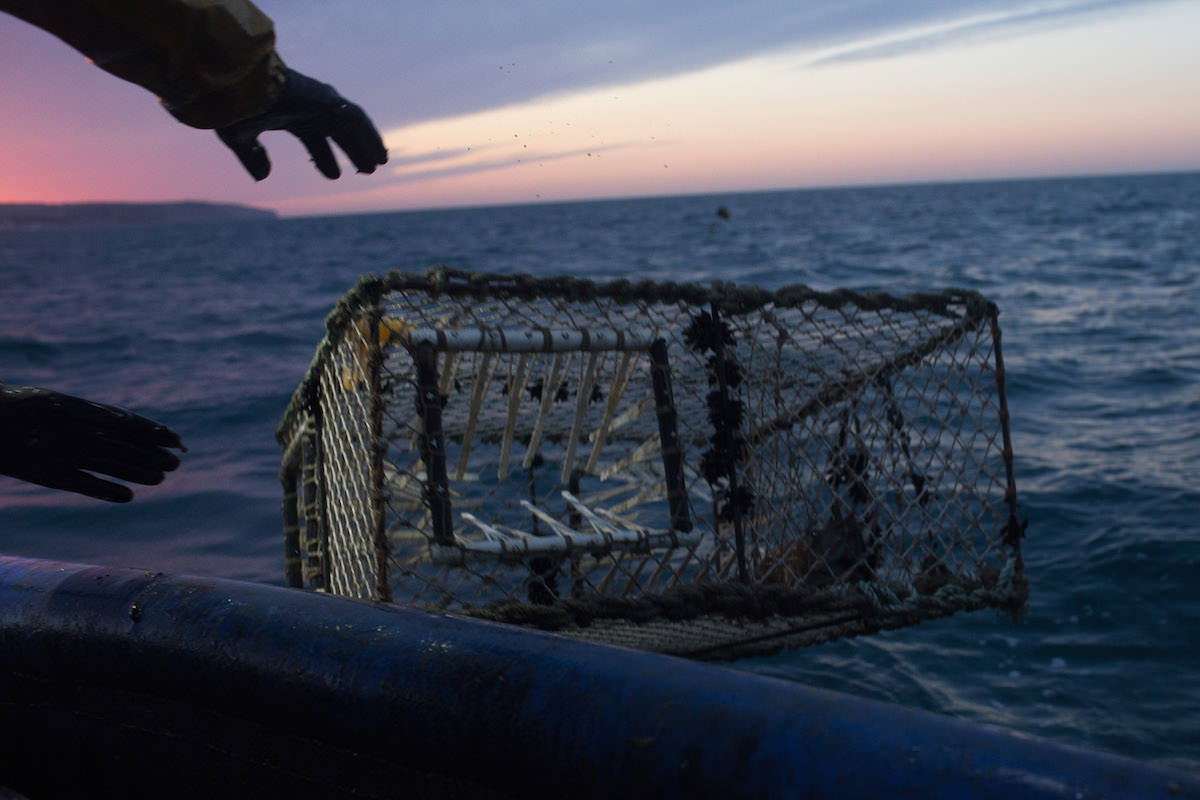 These small fishing vessels account for 77% of the UK’s fishing fleet, and provide 65% of full-time employment in the industry. Coastal communities rely on fishing, and the jobs and tourism it brings, to survive.

The Stade beach in Hastings has been home to fishermen for centuries and currently holds 29 of the 339 small fishing boats in the south east who are permitted to access around 30% of the regional quota. The remaining 70% is controlled by 9 larger vessels.

“We’re in a situation where we can’t make a living. Smaller boats are losing their right to fish, being pushed out and decimated by larger vessels. We’ve got a long heritage of sustainable fishing. Quota is the lifeblood of the community, if you take our quota away, we die,” says Paul.

If the given quota is exceeded at sea, under current rules fishermen can’t legally bring the fish ashore or sell it in the market, but are forced to throw catch overboard as “discard” so that they aren’t penalized with fines. 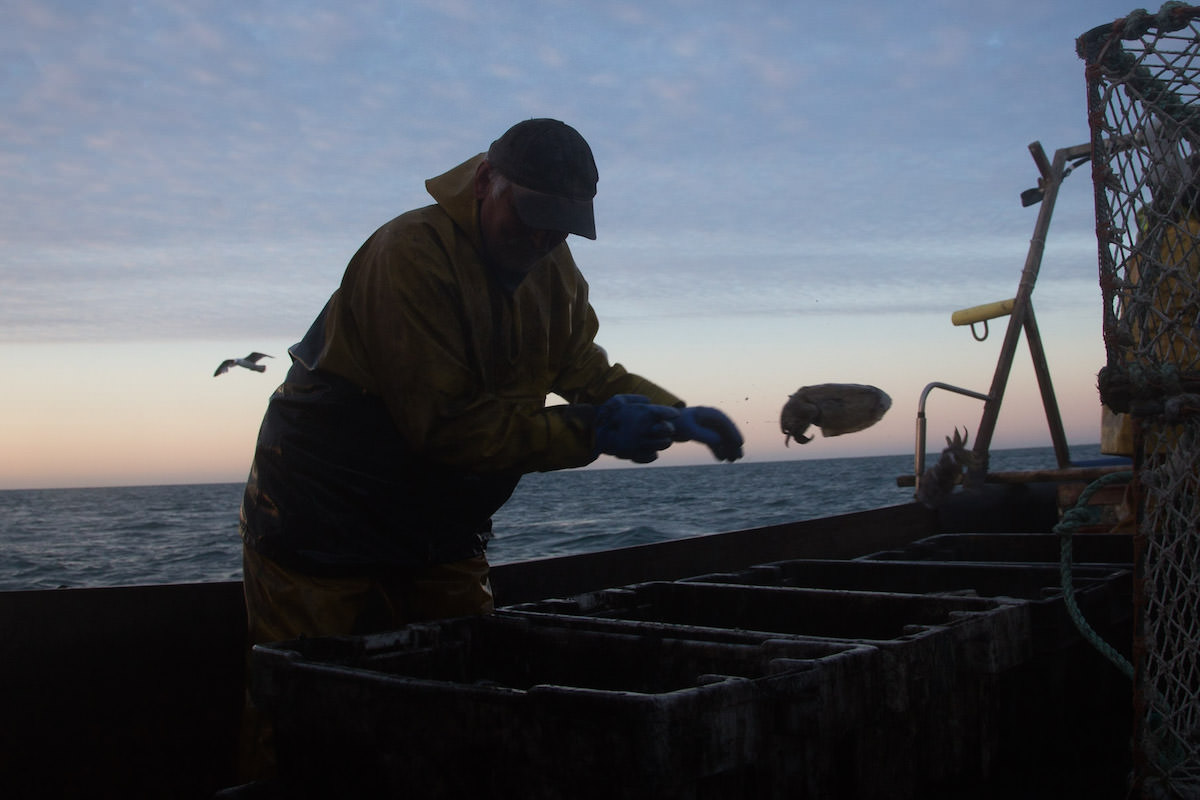 “We’ve got quota on cod which is 42 kilos a month, which equates to half a fish a day, and that’s for four people. It’s impossible to make a living on that and we’re having to throw fish back in the sea dead. Week after week dumping fish back in the sea, we’re dumping plaice back, we’re dumping skate and sole back because we haven’t got the quota for it. The swim bladder ruptures and 99% of the fish die. It’s heartbreaking.” 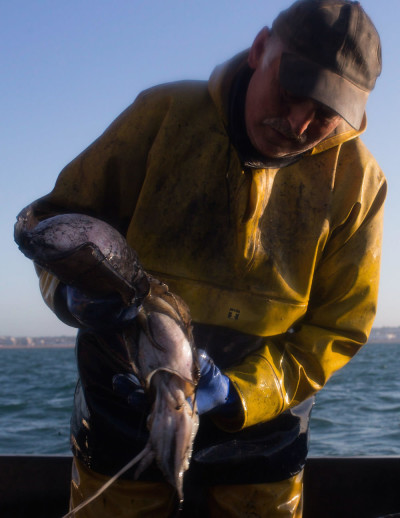 Paul is Co-char of the New Under Ten Fishermen’s Association (NUTFA). Founded in 2008, it was set up to give a voice to small fishing operations. He also runs the Hastings fishermen protection society, which is campaigning for change at a European level. An unlikely union of fishermen and environmental groups including Greenpeace have joined forces to challenge the current system which they believe unfairly supports big industrial fisheries.

“Unlike industrial fisheries, the fishing methods used by small scale fishers have a far lower impact on the marine environment.  Their wellbeing and livelihoods are also essential for the economic and cultural survival of many coastal communities,” says Rukayah Sarumi, Greenpeace Oceans campaigner.

As an outspoken critic of official policy, Paul claims that he has been a target. He says he was put under survellience and filmed by the Marine Management Organisation (MMO) – the body tasked with policing the UK’s fishing sector – and later fined £5000 for half a box of fish that he miscalculated. The fisherman now has a criminal record and has been removed from committees that he sat on.

“Its about big industries and power. Small boats have no representation. They used to work through the National Federation of Fishermen’s Organizations (NFFO), but it was taken over by producer organisation executives. If you look at the board of the National Federation, the committee and chief execs are all producer organisations execs, so its the same people. They have a vested interest,” he says.

On 1st of January 2014 a new Common Fisheries Policy (CFP) came into force, including “commitments to eliminate discards and decentralise decision making away from Brussels” and “legally binding requirements to set fishing rates at sustainable levels.” The UK’s Department for Food, Farming and Rural Affairs (DEFRA) said they were now committed to “improving the way we manage fisheries.”

“Quotas play a crucial role in ensuring the sustainability of our stocks and it is important we strike the right balance between supporting our fishermen and protecting the marine environment for the long term benefit of the industry,” a spokesperson said.

She added they are committed to the UK’s local inshore fishing fleet.

“We greatly value our coastal communities and local inshore fishing fleet. Last year we increased their potential catch by 720 tonnes by reallocating quota and we are continuing to look at further ways to support them. This includes considering how we can allocate any additional quota we get next year in light of the demersal discard ban.” 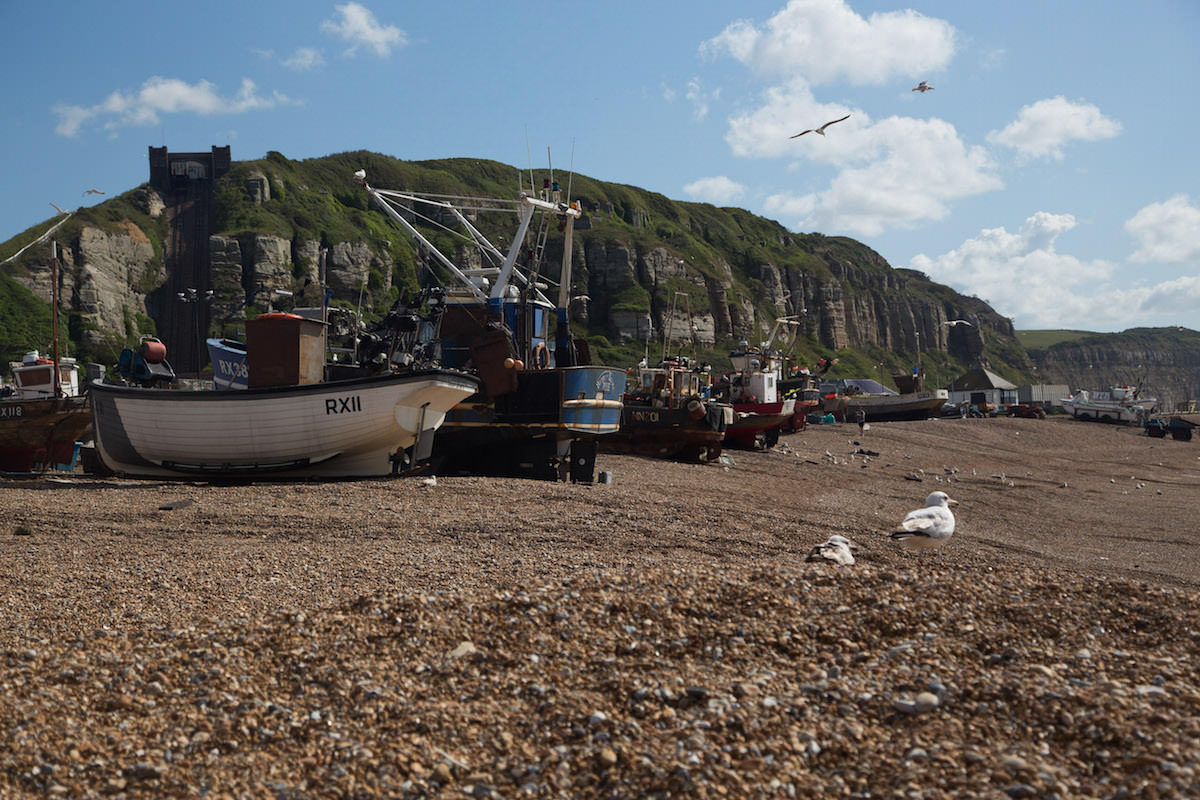 But critics say implementation is now the main issue, and change has not been forthcoming.

“It is important that the Government takes these facts into consideration, and as stipulated in the Common Fisheries Policy, uses a criteria that considers the environmental, social and economic impact when allocating fishing quota,” says Rukayah Sarumi. 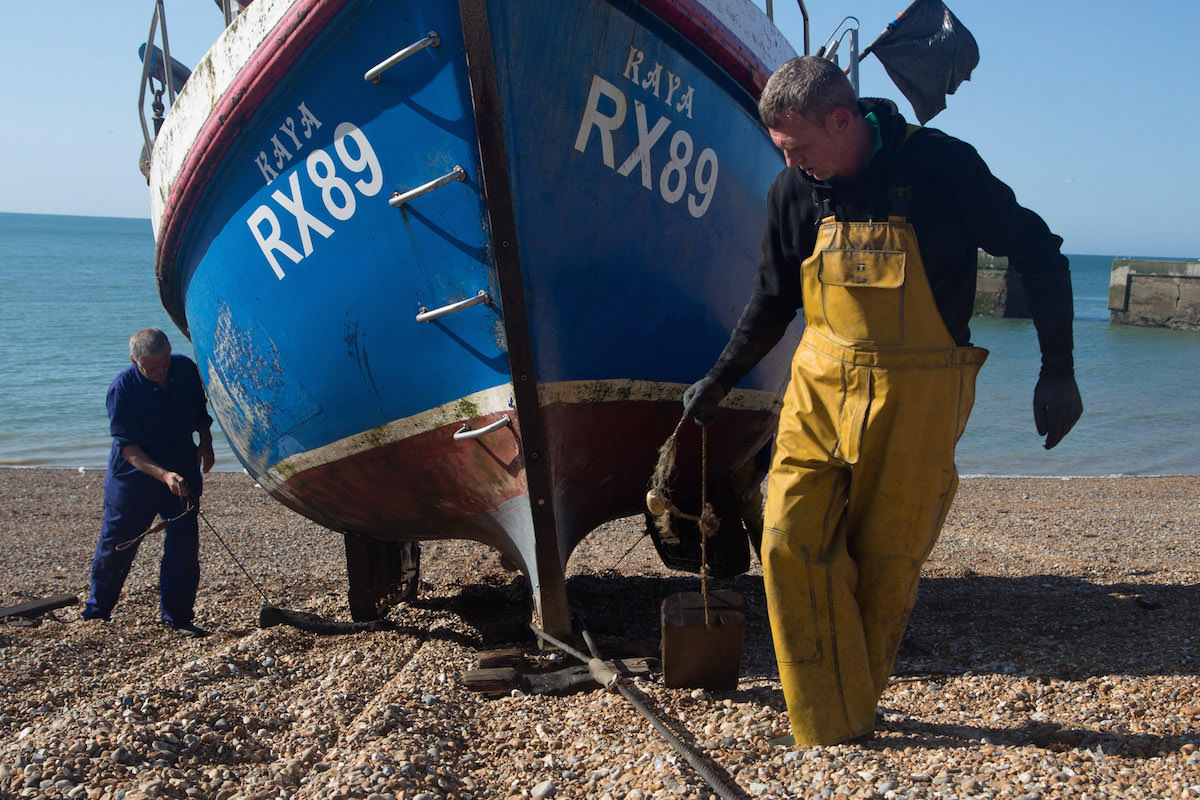 In the meantime DEFRA has given permission for small boats to lease quota from producer operators who control their own allocations, which fishermen say essentially turns fish into a private commodity. Due to the unpredictable nature of weather and catches, if a small fisherman buys quota, they say, there is no guarantee that the quota will be met.

“It’s about money, it’s about business, it’s about the right to fish, who holds that right and who financially benefits from that right,” says Paul. “It used to be about coastal communities but it isn’t any more. There are many bankruptcies in the small 10 industry because of lack of quota. It’s fundamentally wrong. It needs to be sustainable, and we should be the last to go not the first to go. £114 would be maximum we could earn if we caught all of the quota for the week. How can you survive? People are going under.”

Sarah Stirk is a freelance photojournalist working with Ecostorm.