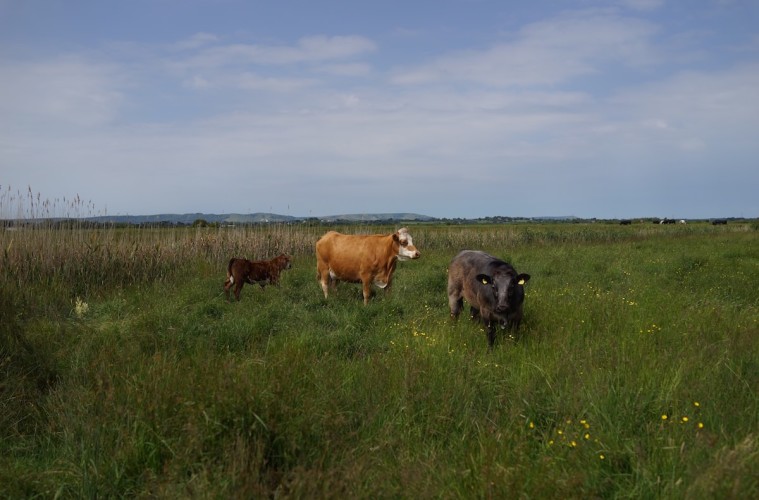 I noticed that the Friendly Cow was bulling today, so I phoned Fred to let him know.

‘Righty Ho. Just pop her down to the corral; put her into the crush and I’ll bring the AI (Artificial Insemination) man down.’

‘No problem,’ I replied with a giggle as I observed the Friendly Cow eyeing me up, tossing her head, and pawing the ground. Her calf, was standing beside her, in contrast to her looking exceedingly chilled and carefree.

‘No sense of adventure,’ I muttered as I ended the call. I counted the cattle from across the other side of the dyke.

Normally I would have crossed the rickety bridge and wandered amongst the herd, but a quick risk assessment in my head persuaded me that it wouldn’t be wise. Not that I was concerned about crossing the bridge, which I probably should have been as it was ancient, with the odd plank missing. But we’ve been using it for years and I’ve yet to fall in.  But the Friendly Cow, as we’ve  affectionately named her, didn’t look as if she would tolerate close inspection.

We needed to buy some extra cows for our Suckler Herd.  Continental cross cows, with calves at foot, were advertised at the local livestock market.  As they came into the sale ring we liked the look of them, so we bid.  Two lots fell to us, everything seemed fine. We paid up, collected the passports and backed up the trailer to load them from the pens.

‘You best check that the passport numbers tally with the ear tags, and I’ll give them a dose of wormer,’ said Fred.

I was busy checking the numbers corresponded when I heard a commotion.  Looking up I was horrified to see our new cow charge at Fred, hitting him in the chest. The impact sent him flying through the air. Luckily the pen gate flew open and Fred landed in a heap on the concrete outside. A quick thinking market worker slammed the gate shut on the cow who was looking extremely menacing, and acting as if she would like nothing better than to follow up her attack on her new owner. A different market worker chose that moment to announce ‘that cow was lively when we unloaded her.’ Not what I wanted to hear! Useful information to know before the sale not after it. Fred had no major damage, but some colourful bruises.

Looking at the situation from the cows’ aspect it must be quite scary, being removed from familiar surroundings; loaded and off loaded and put through a sale ring. In her eyes she was protecting her calf.  We hoped that she would settle down when she joined the other cattle in our herd, who are a bit like old friends, almost accepting of us as part of the herd. So I will try to reserve judgement on this one in the hope that she comes good. I don’t mind admitting, I won’t be turning my back on this cow any time soon.

It’s a dilemma that adds ‘stress/spice’ to a farmers life. Do we keep her? Should we breed from her again? Will she allow us to load her with her calf, that she protects so fiercely, onto a trailer? Along with the rest of the herd at the end of the summer grazing season. Who knows the answer, we’ll find out in time.