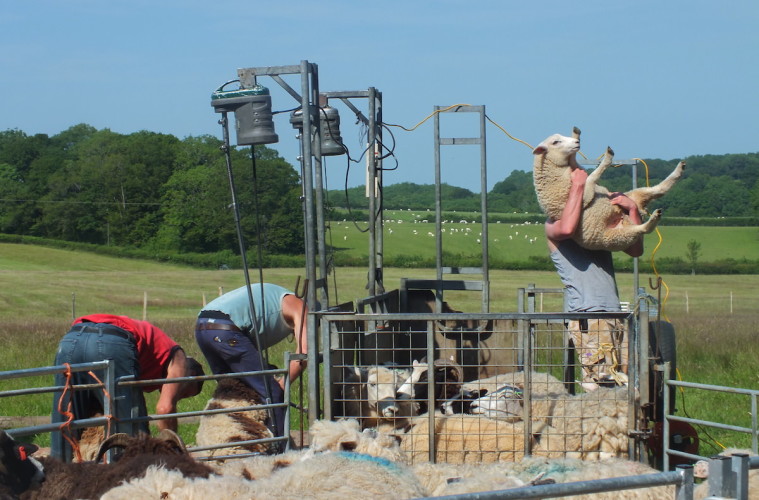 Sheep Shearing in the UK

The sheep shearing season in the UK (roughly mid May to mid July) is pretty much finished now, so farmers will be pleased that one difficult and time consuming job is over for another year, and the sheep will be happy to have got rid of their thick fleeces in this hot weather.

Shearing requires both skill and a lot of hard, physical work in hot summer conditions.  Some farmers shear their own sheep but many, especially those with large flocks (anything over a few hundred sheep) hire specialist shearing gangs to do the work for them.  Shearing gangs typically have three to eight members, and travel the country going from farm to farm, shearing every day during the season.  It is a hard life but pay can be good, about £2 a sheep and a good shearer can shear 200 sheep per day.  When the UK shearing season is over, the shearing gangs often travel to other countries where the shearing season is at a different time of year, in what is known as ‘the shearing circuit’, travelling from the UK to Norway, the USA, the Falklands, New Zealand, Australia, and pretty much anywhere that you can find plenty of sheep!  It is a very tough, hard working and hard drinking lifestyle, but it’s a good way to see the world, have fun and make some money.

Wool used to be where the main profit was in sheep farming, with meat as a useful sideline.  Many of the great Cathedrals and castles of the middle ages were built using the profits from the wool trade.  The Lord Speaker in the House of Lords still sits on a ceremonial Woolsack to represent the importance of wool to the economy in former times.  Now, however, sheep farmers make their main profit from meat, with wool being a very minor sideline. 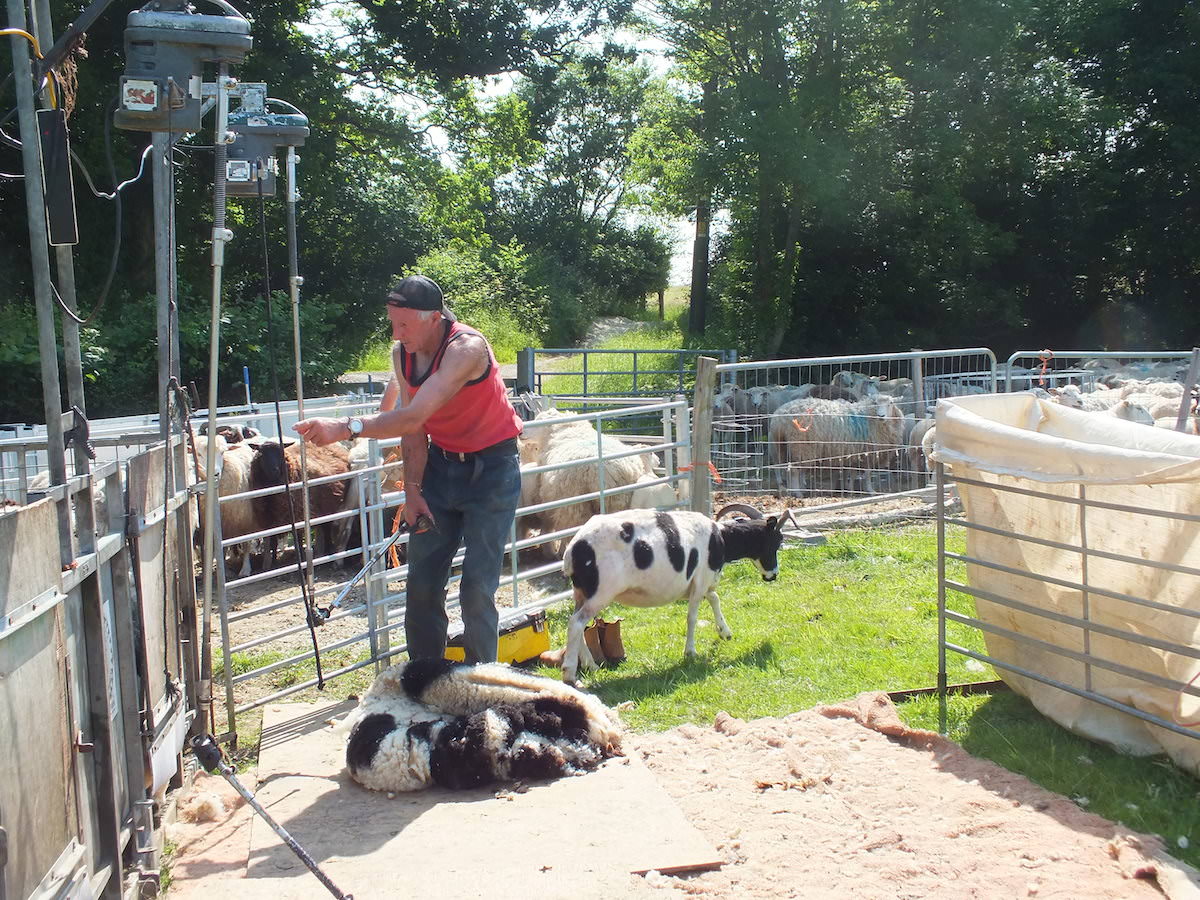 Each breed of sheep (and there thought to be over 80 breeds in the UK, 60 of them native to the British Isles, the highest concentration of different sheep breeds anywhere in the world) has a different type of fleece, and each type is worth a different amount of money depending on its characteristics and quality.  The vast majority of wool produced in the UK is sold to the British Wool Marketing Board, a co-op which sorts and grades each fleece and sells the wool at auctions to international textile producers. I keep Romney and Jacob sheep, and an average fleece from a Romney ewe weighs about 3kg.  This year the price for Romney fleeces is £1.40 per kg, so an average fleece is worth £4.20.  A Jacob fleece is slightly lighter, around 2.5 kg, and is worth £0.67 per kg, so I will get £1.67 for each Jacob fleece.  Deduct £2 per fleece for shearing costs and a bit more for transport, and you see I am only going to get about £2 per Romney fleece and I will lose about £0.40 for each Jacob fleece!  I will sell most of my wool through the marketing board, but this year I am planning to keep a few fleeces back to send to a local firm who will process the raw fleeces into balls of naturally coloured wool and I will have a go at selling the wool at farmers market.  I will keep you posted on how I get on!

Because of the very low or even non existent profit margins for wool it would be much better if I could get away with not shearing them at all, but it has to be done to stop them overheating in the summer and to stop them being affected by ‘flystrike’, a horrible condition where flies are attracted to the hot damp skin under heavy fleeces and lay eggs under the fleece which hatch into maggots and start eating into the sheep, something no sheep farmer wants to find in one of his sheep.  To avoid this type of problem, and to compensate for the very low price of wool, a new breed of sheep has been developed in the UK that sheds its wool naturally in the summer and so does not need shearing.  It is called the ‘Easycare’ sheep, and is an interesting development that is growing in popularity, and Im sure it will become more common if the wool price remains so low or the cost of shearing increases which seems likely. 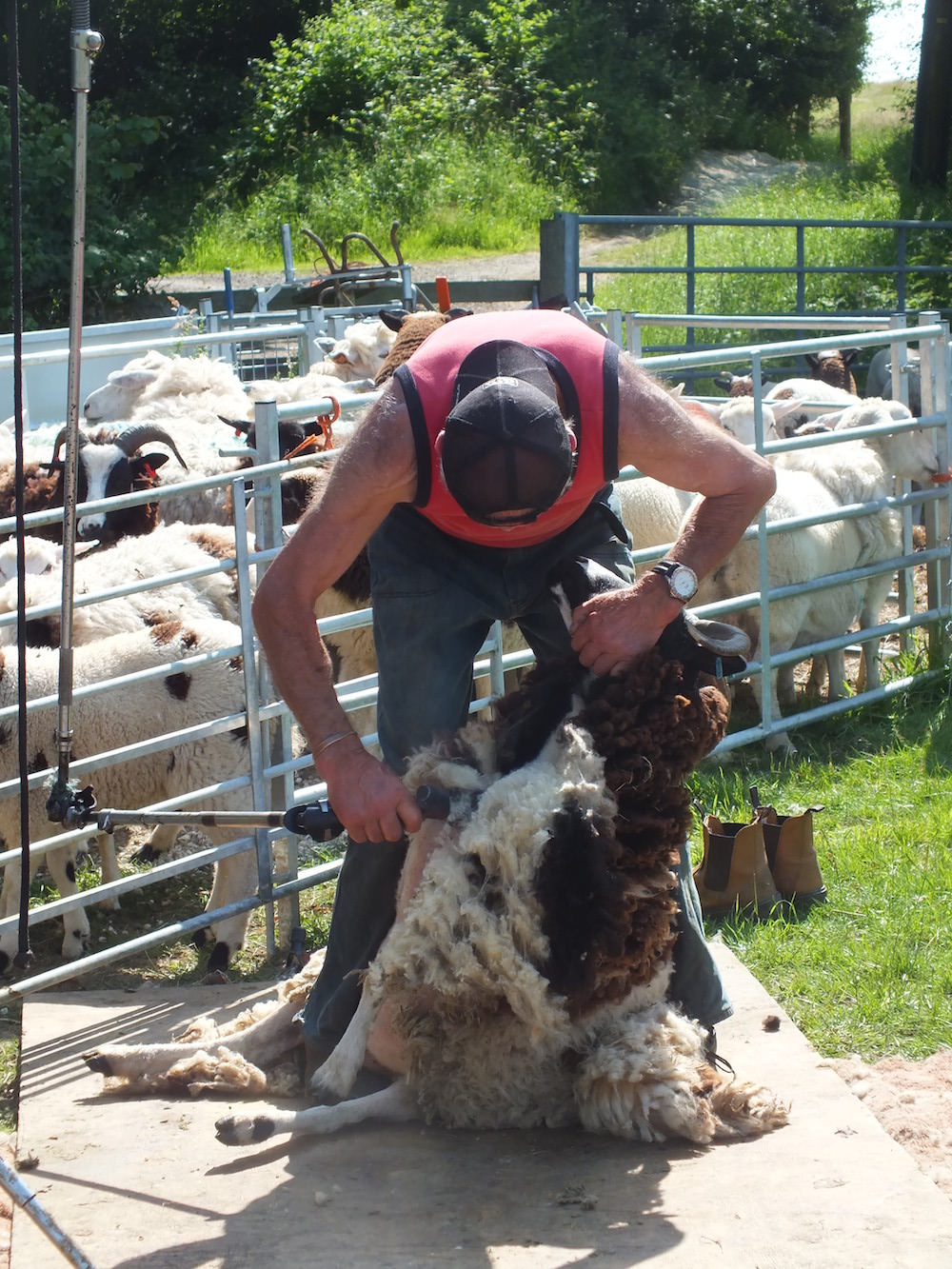 As a new sheep farmer I have not learnt to shear yet, but it is definitely on the list of skills I want to learn.  The two shearers who sheared my flock this year were aged 62 and 70, two local sheep farmers who have been shearing all their lives and are still very strong and tough blokes.  They will still be working in their 80’s Im sure!  But the sheep farming industry definitely needs to encourage a new generation to learn the skills necessary to keep sheep healthy and happy, and we also need to find a way to make wool profitable again!