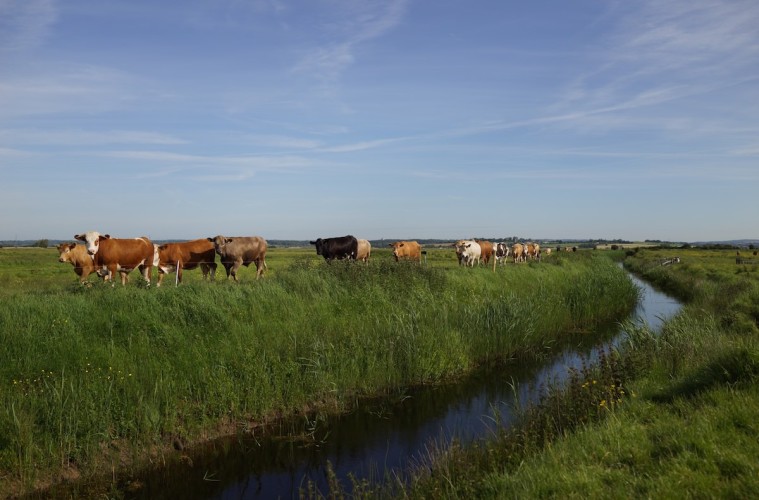 A cow swimming in the river, take a second look. You might think, ‘It’s hot today, perhaps it fancied a swim.’ But cows don’t tend to go swimming, unless by misadventure. One of our daily tasks on the farm, is to check the cattle that are currently grazing on the Pevensey levels. 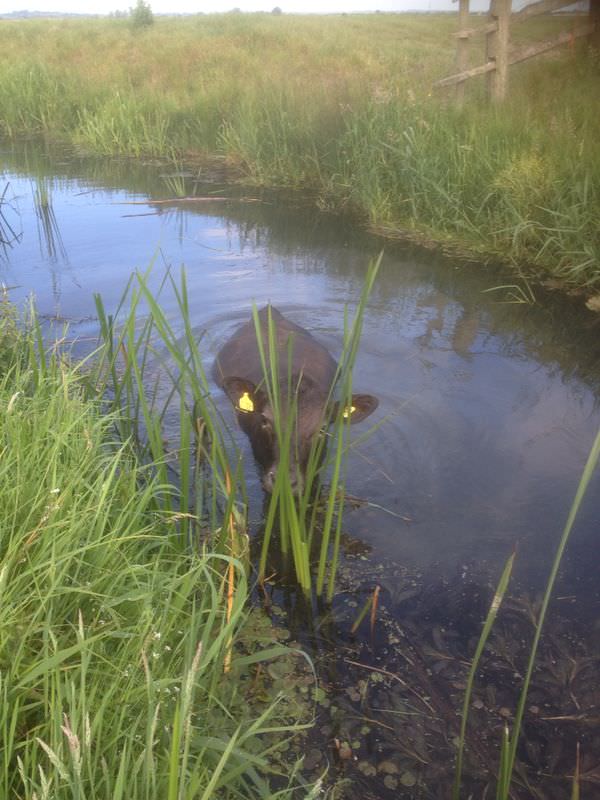 These levels refer to an area covering 4,300 hectares of low lying land situated between Eastbourne and Bexhill. In 1977 it was declared a Site of Special Scientific Interest. The Sussex Wildlife trust own and manage 132 hectares designated a National Nature Reserve in 1996. As a farmer, using part of this land, our animal management methods accommodate the needs of the wildlife. Pevensey levels are drained by a complicated system of dykes (around 600 kilometres of them) feeding into two main rivers and the water levels are controlled by sluices.

This area has a very special charm all of its own, raw natural beauty, peaceful, unspoilt, with an abundance of wildlife, impressive scenery and lighting, and the Sussex Downs as a back drop. It is easy to feel close to nature in such a setting, almost therapeutic, an escape from the rat race of life. In this setting it is easy to feel at one with nature.

It is a common sight to see mute swans swimming with their cygnets up and down the waterways. I dread finding is a cow in the river, but it happens, to us and our neighbours on either side and across the river. Cows can swim, but after a while they get tired and cold, and in the worst case scenario, drown. So Operation ‘Get Them Out’ is commenced. So why do they get in there? Mostly inadvertently. The river banks are steep in places and they may just have been grazing on the bank and fallen in. Sometimes the cattle like to lark about, especially if one is bulling, coming into season and feeling frisky they can get pushed in. Occasionally unwelcome visitors frighten them in; or sometimes they feel the need to join a neighbouring herd across the water and are unable to get out.

On the Richter scale of challenges, getting them out varies enormously. Last week we were lucky the cow was both strong and greedy! It was a simple matter of showing her cow cake by rattling a few nuts in a bag and enticing her to swim downstream to a drinking place where she was able to walk out of the river under her own steam. But it is rarely this simple. If the cow has become exhausted and weak, lacking the strength to climb out, we then have to physically get into the river in order to place lifting straps strategically around its body. Not easy when an animal is scared and frightened and uncomprehending of the fact that you are actually trying to help it. The river bed is very muddy and the reeds and other vegetation combine to make this a risky, slippery, tangly, cold, job. Tractors with fore loaders, or JCB handlers, can be used to then lift them out. It is amazing how quickly an animal, helpless whilst in water, can make an instant recovery when it feels dry land under its feet.

Last summer we experienced an extreme demonstration of this situation. A steer (teenage boy in the cattle world) was very ungrateful to us for saving his life. He was panicking, terrified by all our attempts to get him out of the water. Eventually we had to use ropes and a halt, attaching them to our pickup truck in order to help him out of the water. He then seemed to think that it was us that had caused him grief. Just as we were about to release the ropes he turned on us with a look of pure hatred in his eyes. He bellowed and charged. We ran for our lives and vaulted into the back of the truck, whereupon the steer ran around the vehicle battering it with his head. He even tried to join us in the back by rearing up with his front feet, so we pushed him away. He looked both mean and angry.

A tricky situation as we needed to remove the halter and ropes without getting injured ourselves. The more the steer charged, the tighter the ropes became, making it harder for us to remove them. We had to wait until he had calmed down and then, by leaning over the side of the truck, gingerly worked the ropes loose. Eventually he was set free and ran off to join the rest of the herd, who were watching from a safe distance as cattle are curious creatures. We quickly jumped from the back into the cab and drove away, feeling lucky that no one had been injured. Apart from our faithful old pickup of course, who incidentally, the rather disbelieving insurance assessor pronounced ‘a write off.’ Well, what’s a few dents amongst friends? They add to the pickups’ character; nothing wrong with the engine; goes well and the cattle do like to congregate around it. Farming is not for the faint hearted, but it is fun isn’t it?