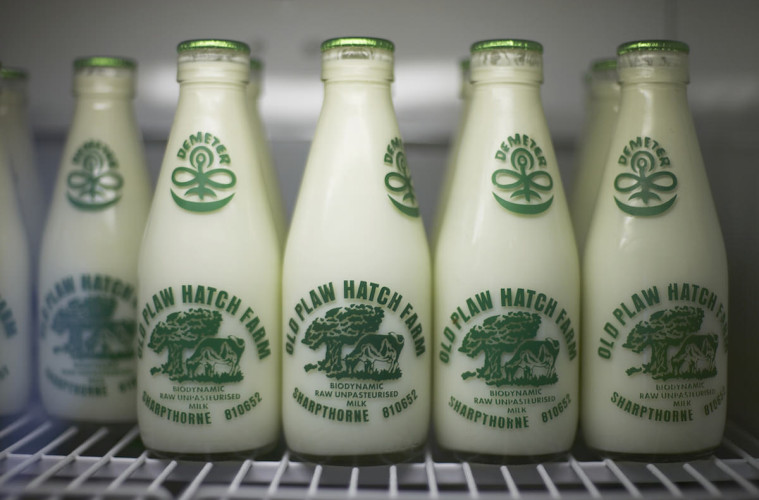 The Plaw Hatch farm shop, nestling in the beautiful West Sussex countryside somewhere between Forest Row and Balcombe, is how shops probably once were, and probably should be again in the future.

Minimal gimmickry – no flashy signage, overpowering advertising, or misleading  ‘2for1’ offers on produce no one really wants or needs – lots of daylight, sacks and pallets, boxes, real smells (as opposed to the fake aromas pumped out by supermarkets to project authenticity), and – most importantly – piles of real food, unburdened, in the main, by excessive packaging or fanfare.

Food on sale includes fruit and vegetables, groceries, tinned produce and other ‘essentials ‘, fresh bread, cakes, meat, oils, juices, wine and ciders, cheeses, milk, yoghurt and other dairy items. Virtually everything is organic, much is biodynamic. A significant proportion is produced by the very farm upon which the shop sits  – or by its sister enterprise, Tablehurst, situated a few miles away at Forest Row.

Both are community farms, part of the misleadingly dryly-named ‘Tablehurst and Plaw Hatch Community Farm Industrial and Provident Society’, which in effect means they are owned and operated democratically by upwards of some 500 local people – plus outside supporters – who are each shareholders. (Each farm is actually a limited company employing dedicated staff who are responsible for the day to day farming activities; a separate committee oversees the longer term development of the ventures.)

When I visited Plaw Hatch,  business manager John Twyford, and Tom Ventham, who ran the dairy herd – he has since left –  explained how the majority of the food produced is sold direct to the public from the farm gate.  Plaw Hatch focusses on horticulture and a dairy enterprise which makes raw milk, yoghurt, cream and cheese. The herd behind these comprises 40 Meusse-Rhein-Issel (MRI) cows, which are celebrated, particularly in Europe, for producing milk that is good for cheese making.

The herd, along with both Plaw Hatch and Tablehurst farms’ as a whole, is managed to strict biodynamic principles. The Biodynamic Agricultural Association (BAA), an industry trade body, summarises this thus: ‘A biodynamic farm functions as a strong, self-sustaining and vibrant single organism that recognizes and respects the basic principles at work in nature. It is a complete system in which all the different components of the farm are seen as parts of a greater whole. With farm animals at the centre a self-sustaining, balanced and harmonious environment is the result.’

Biodynamic agriculture is based on the teachings of the philosopher Rudolf Steiner, who in the 1920s began to outline his vision for a more holistic form of farming in a direct challenge to what he saw as the alarming degradation of soil quality across Europe because of overuse of inorganic fertilisers and pesticides.

In common with organic agriculture, biodynamic farming practices strictly limit the usage of pesticides and other chemicals, and minimise the application of antibiotics – the medicines can only be given to livestock to treat illness, rather than be used for growth promotion, as is quite common in conventional farming.

But central to the biodynamic approach is the application of a number of homeopathic-style preparations – made from animal, plant and mineral products – to fields and to compost at specific times of the year to improve the microbiological life of the soil and stimulate fertility. A biodynamic calendar, taking into account the movements of the earth, sun, moon, planets and constellations, is also often used. These two ‘tools’ underpin the system and, say its advocates, ensure that food produced as a result of biodynamic practices has optimum goodness and vitality whilst imposing a lighter footprint on the land.

At Plaw Hatch, John and Tom confirmed that such preparations are administered to both soil and compost. They admitted there’s little scientific research to illustrate the benefits of such applications, but, in keeping with the wider biodynamic philosophy, state that there is ‘something bigger’ definitely going on.

In common with other biodynamic dairy farms, the Plaw Hatch cows are not de-horned, as anyone visiting the herd will immediately notice (in contrast, most cows we are likely to see out in the fields or in barns have had their horns removed). This is because horns are seen as an intrinsic part of the animals ‘whole’ being, and biodynamic thinking places the cow at the very centre of the wider farm ‘organism’, in both a practical and spiritual sense.

The confined conditions found in some larger, conventional farms (one reason cows have horns removed), are not an issue at Plaw Hatch  – although the herd spends some time in the large barn in winter, the cows are about as free range as can be. This is a far cry from the trend of ‘upscaling’ dairy farms towards the intensive US model, where thousands of animals are housed in feedlots (with feed brought to them, rather than ever being able to graze).

Proposed ‘mega-dairies’ such as this in the UK have attracted huge controversy because of concerns over poor welfare conditions and environmental impacts. Plaw Hatch should be regarded as an antidote to such developments – each cow has a name! – and those involved in farming the creatures do so, it appears, with a degree of respect and dedication not always present elsewhere.

All this risks sounding idyllic, and in many ways it is, especially when combined with the farms’ policy of transparency – Plaw Hatch is ‘open’, meaning that anyone is welcome to turn up and have a look around around – and inclusiveness – people from all walks of life and age are encouraged to become involved, including those with disabilities, mental health or other special needs.

The age of cheap food

But ensuring farm land remains productive and sustainably managed is not always easy; neither is the challenge of remaining commercially viable in the age of cheap food and competition from conventional supermarkets.

Those running Plaw Hatch admit the food they produce and subsequently sell is not the cheapest – ‘more than Sainsburys, but not more than Waitrose’, according to John Twyford – but say this reflects the true cost of ethical food production. The shop serves a quite affluent area, but still attracts ‘normal’ families for whome food is really important. ‘People do [come here] to do bulk, staple, shopping, potatoes, broccoli, tomatoes,  John says.

Although biodynamic dairy farming by nature is focussed on the local – ‘We don’t want to feed the world, just our community’, says John – making the approach work on a truly commercial scale is largely untested. Plaw Hatch therefore offers an inspiring and, based on present figures, potentially viable example of  ethical farming. And if for no other reason, lovers of real food should take note – the  farm’s yoghurt won the 2012 best dairy category in the annual Soil Association organic food awards.

Andrew Wasley is a UK-based journalist specialising in food and the environment. He is co-founder and director of ethical research agency Ecostorm, and a co-founder of the Ecologist Film Unit. His book, The Ecologist Guide to Food, was published earlier this year by Ivy Press. A version of this article appears in the book.

Images from the book  “Biodynamics in Practice: Life on a Community Owned Farm”. Photography by Will Heap