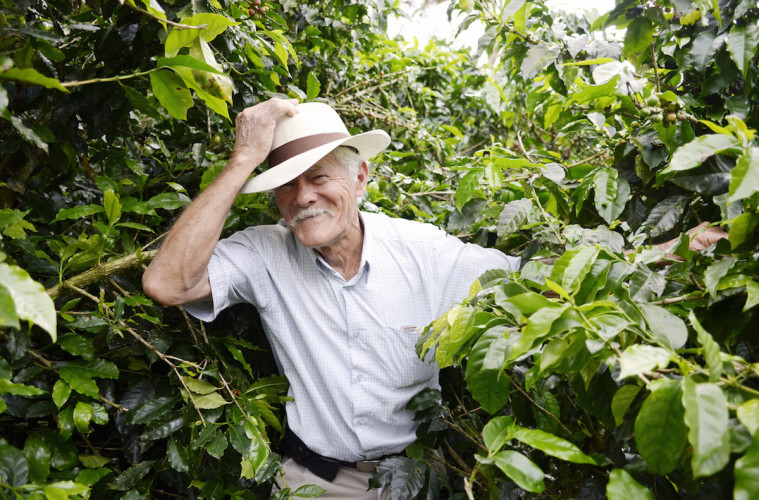 A Cup of Colombian Coffee

The poor quality beans are roasted longer to make the taste stronger, which stretches the coffee further, and allows for cheaper sales. They’re darker and greasier on the outside and bitter in taste. The good quality beans, on the other hand, are only roasted as long as necessary; they are sweeter in taste and drier on the outside and are used to produce delicious tasting coffees like those from Iron and Fire.

Don Elias is a 75-year-old organic coffee farmer, who sells his brew mostly to travellers he takes on tours through his 4 hectare farm in a small town called Salento in the Zona Cafetera. He lives well off the tourist business. We imagine it won’t be long until people from coffee review sites like The Darkest Roast come to sample his coffee and tell the world how good it is. For fertilizer he uses the skin of the coffee beans, and the biodiversity of the plantain, bananas, oranges, yuca, and avocados that grow around the coffee plants do the rest. He uses herbs for pesticide, and either sells the fruit or his family eat it themselves. His coffee is hand picked, like all coffee in Colombia. Then the beans are peeled, soaked in water for 24 hours, dried in the sun for around 50 hours, roasted on his stove and sold ground or as beans. In general, coffee in Colombia is given unroasted to the The Federation der Cafeteros – the FNC – for the Colombian ‘Juan Valdez’ stamp of quality approval. This famous ‘Juan Valdez’ figure has been used to advertise the Coffee Federation since the 60s, the image of man and donkey representing the quality face of Colombian coffee.

Colombia has a tropical climate and the necessary altitude to grow quality Arabica coffee. These beans need to grow between 1,200m and 1,800m above the sea level, and at temperatures between 17 and 23 degrees celcius. Even within these strict conditions there are other obstacles farmers must overcome. The organic coffee farmer Jorte Agredo owns a small piece of land at around 1,700m above sea level, but is not able to grow Arabica coffee. Without pesticides he can’t fight against the coffee farmers’ biggest problems: the ‘broca’ borer worm and the ‘roya’ fungus that started attacking the ground and beans 15 years ago. Before walking through his fields – especially after visiting another coffee farm or ‘finca’ – your shoes have to be disinfected. Every fortnight he has to clear away all of the coffee beans that have fallen to the ground, as insects can easily attack the fallen beans and then move on to the trees. He uses a new coffee bean that was developed three years ago by the FNC that is resistant to certain infections and can grow without chemical fertilizer, called castillo naranjal.

“50 years ago my grandfathers didn’t need fertilizer. They had big trees that gave off nitrogen as fertilizer, and gave the coffee shade to grow. The coffee was completely organic and prosperous,” says Gilbert Sanchez, who alongside his mother and sister has spent the past 7 years turning their property slowly back into an organic farm. The ground was ruined around 20 years ago when the FNC offered farmers a new fertilizer that would produce twice the amount of coffee. But for it to work, the trees needed to be cut down to make more space for coffee. Along with the doubling of coffee production came the roya and broca as the bean was no longer protected by nature. By 1997, infestation had ruined nearly 700,000 hectares of Colombian coffee country – or some 255,000 plantations in 379 districts.

Gilbert’s mother, Maria Olivia Sachez, looks younger then her 80 years. As we talk, she serves us a guava cream made from their garden fruit and fresh glass of milk from their cows. Like Jorte Agredo, they are no longer supported by their coffee plants. They have cattle, fruit, vegetables and a fish farm. It takes three years to receive certification as an organic coffee grower. The ground and trees will need that time to recover.

Most small farmers feel that the FNC isn’t doing much for them at the moment. They say their original intentions were good and they did do a lot for the coffee industry, but now the government is too focused on oil and and other natural resources. That being said, driving through the coffee zone from Armenia to Manizales you will see some of the best paved roads in Colombia. These were financed and constructed by the FNC for the coffee industry.

Diego runs the biggest organic farm in the region of Risaralda, with 47 hectares and a yearly production of 150,000 kg. He believes that one of the problems coffee farmers face is expressing themselves – or as he puts it, “small farmers are good workers but bad at marketing.” He too plants the castillo naranjal and works strongly together with the FNC finding new techniques to help coffee growers.

Not one for the biodiversity of other farms, on his ground you’ll find only coffee. He pulls out his phone and uses an app to monitor what time of day is best to sell his coffee on the market. These are tools that small farmers don’t have, or don’t even know exist. “When you come to a place like this, and think entrepreneurial, you can take a farm and turn it into an enterprise.” 50 years ago his father only had one buyer for his coffee. Nowadays, he has many. On a piece of paper Diego draws a diagram of the coffee development in the few last years. Have Vietnam and Brazil affected the coffee growers in Colombia? Yes, of course. But in 2014 the arrow points upwards. Right now the coffee demand is 8% higher than the supply. And the world-wide demand for coffee is growing at about 2% per year. Still, out of the 80% of small Colombian coffee growers, only 20% are self-supporting. “Their only limitation is their mentality,” Diego explains. Many small farmers choose to use the techniques of their ancestors and are wary of adapting to modern technology. For example, eight years ago Colombian coffee farmers where given the opportunity to invest in ‘Juan Valdez’ coffee shops. Most of the smaller farmers declined, but Diego got involved. Over time, with coffee shops like ‘Juan Valdez’ being the first and other smaller shops following, the demand in Colombia for their own good coffee is growing. Many coffee shops offer information and details as to which region and farm the coffee is coming from.

On a piece of wood hanging over the entrance to Diego’s plantation, he has written: “Here is born the tranquility, strength and love of a good cup of coffee.” The phrase fits well with our idealistic impression of Colombian coffee growing – though it would seem that understanding the business is a completely different kettle of… coffee.

If you’re reading from the Netherlands and are a big coffee drinker, currently hunting for a new coffee machine, you might want to check out this website which features some of the beste koffiemachine options.