In his debut post for Indie Farmer development professional Abhijit Mohanty shines a light on the healing properties of agroecology practices in Southern and Western Odisha, India and explains why farmers in the region have a reason to smile again…

On the slopes of the mountainous terrain, the indigenous communities of Southern and Western Odisha in India have been sustaining their livelihood by age-old practice known as – “shifting cultivation”. Farmers slash and burns shrubs, bushes, and plants on the sloppy land for cultivation of rainfed crops. But over the years, the impact of shifting cultivation has been devastating and far-reaching in degrading the environment and ecology of these regions.

Jaimal Majhi (48) a farmer of the Durukhal village in Kashipur block of Rayagada districts recalls,

“Earlier we used to cultivate a range of minor millets like ragi, foxtail, barnyard, proso, little millet, kodo along with oilseeds, pulses, cereals and vegetables on our lands. As irrigation facility was not available round the year, so we mostly depend on the annual rainfall. If rain comes timely, the harvest were bountiful and we could store ample food stuffs for a year or even two years, but if rainfall delays, than the produces last hardly for 4-6 months. To meet the food security in the remaining periods, mostly during the off-season of agriculture, we have to depend on wage labour and collect forests produces like tuber, roots, fruits, berry, mushroom, lakh, firewood, etc. But for the last one decade, the yield has reduced substantially, rainfall is less and erratic. Forest is also depleting at very fast. Perhaps, this is one of our most difficult times. Survival has become a real challenge for us”. 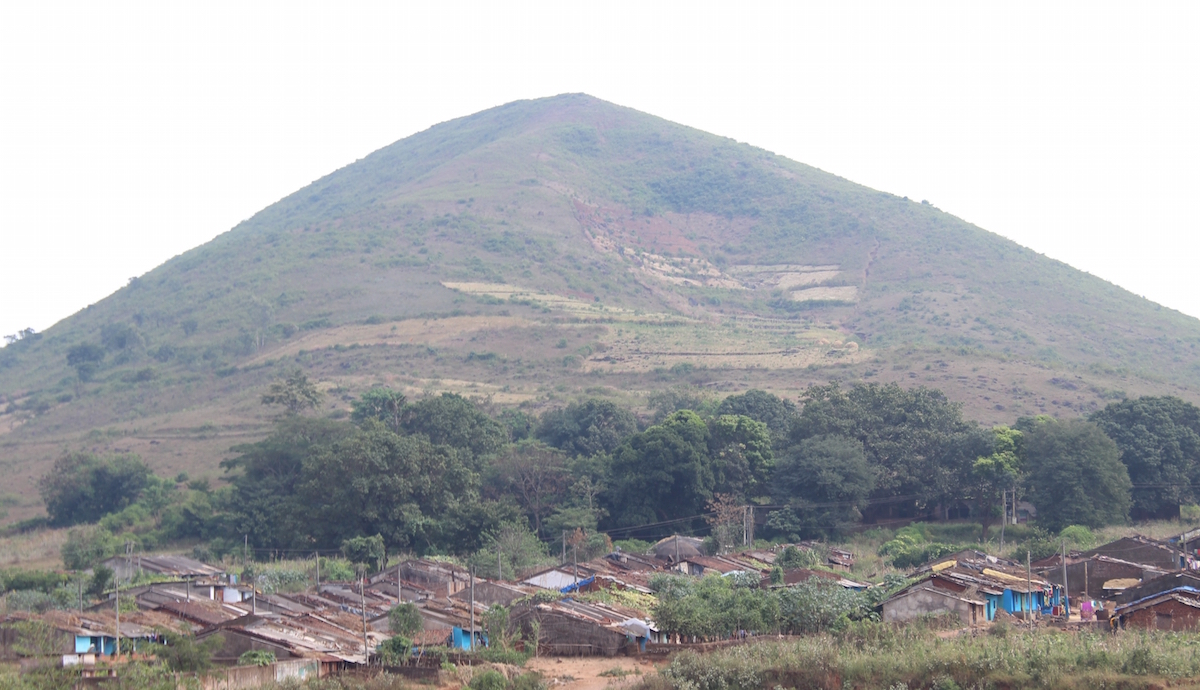 A village nestling on the foot hill of a denuded hill under shifting cultivation.JPG

The deplorable situation for farmer’s like Jaimal bears a striking resemblance with thousands of farmers in the region. The frequent practice of shifting cultivation has resulted in increased soil erosion on the uplands and siltation on the valley bottom lands. Flash flood and landslide makes the situation worse. All these factors had considerably reduced soil fertility. The fallow cycle has also increased up to 5-7 years.

“Nowadays, farmers in the regions are smiling and they have a reason to smile…”

Shifting cultivation has also adversely affected the agrobiodiversity – the local flora and fauna are at the verge of extinction. “Many indigenous crop varieties suitable to local climatic conditions have vanished. The traditional wisdom of farming losing its charm to attract the youths, many of them are either adopting industrial agriculture, using extensive chemical inputs while ignorant about its ill effects, and others are migrating to cities, leaving farming as an occupation forever”, laments Sumani Jhodia, a indigenous woman community leader of Kashipur.

Are there any alternative to improve the situation of the poor farmers?

According to Achyut Das, founder and Director of Agragamee, a grass-root NGO working for the sustainable development of the indigenous communities in the region since three decades, “From the beginning, we strongly believed that the deplorable situation of farmer’s communities could be changed into self-sufficiency once again. To achieve this goal, we have been promoting the “agroecology” model of farming among 2000 farmers in three blocks such as Kashipur, Dasmantpur and Thuamulrampur of Rayagada, Koraput and Kalahandi districts respectively. Today, the farmers are cultivating diverse crops, have sufficient nutritious food for their household members, and also able to sell the surplus items at the local markets as a part of income generation. Thanks to the support of many national and international organisations like NABARD, India, UNDP SGP, India, Karl Kubel Stiftung, Germany, Welthungerhilfe, Germany, and Indigenous People Assistance Facility, Rome. Nowadays, one can see farmers are smiling and they have a reason to smile”. 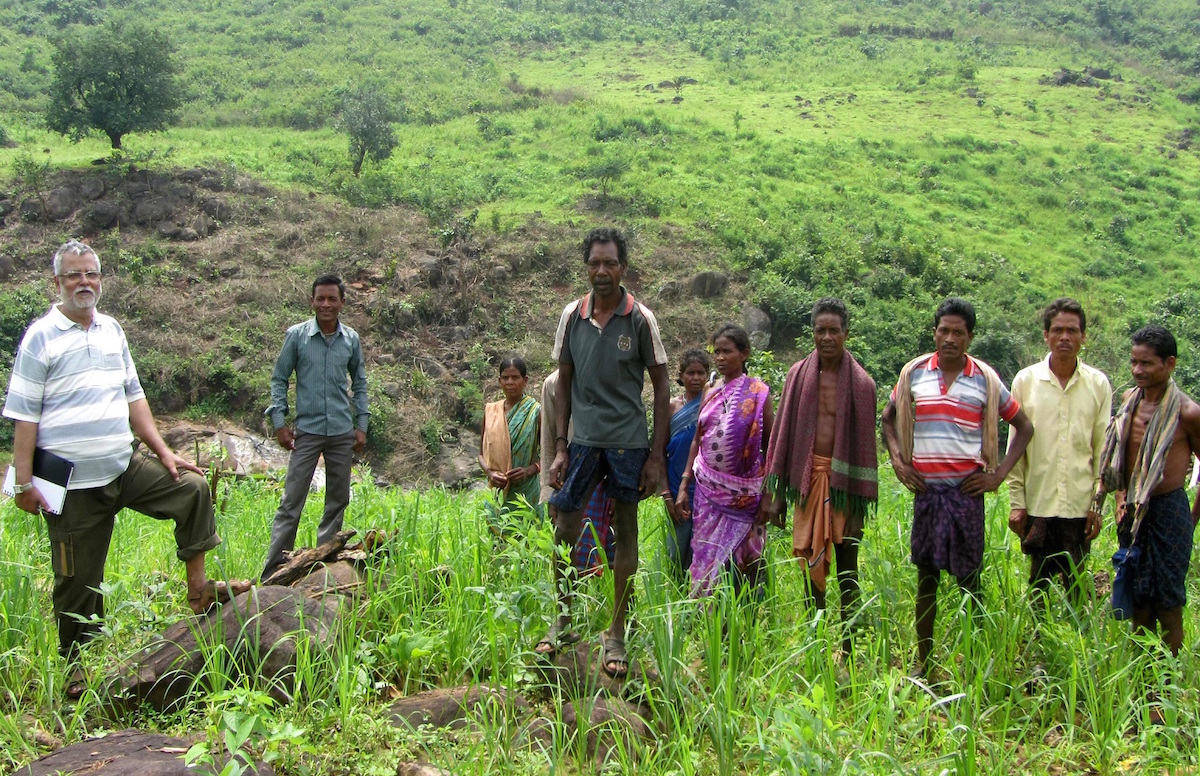 The International Institute for Environment and Development (IIED) of UK defines “Agroecology has evolved as a scientific discipline, a set of practices and a social movement. As a science, it studies how different components of the agro-ecosystem interact. As a movement, it pursues food sovereignty and new, multifunctional roles for agriculture”. IIED states that agroecology has multiple advantages as mentioned below;

Buda Majhi of Kukudagad village in Kashipur block is very happy with the results of agroecological farming. “With the support of Agragamee, I have been cultivating a range of traditional minor millets, pulses, cereals, vegetables as mixed-cropping and inter-cropping in my 0.4 acres of land. Besides, I have also planted fruits spices like mango, cashew, guava, litchi. Earlier, I used to cultivate only paddy and oilseed in the same land, but today, I am cultivating several crops simultaneously and harvesting crops round the year. The surplus produces are sold at the local weekly markets”, shares Buda while excitedly showing his farmland.

“But, it was not as easy as it seems to be. With the support of my wife, we fenced our farmland by planting lantana camara on the border areas. To strengthen the fencing, we had also planted several forest spices near the fencing area. Fencing is very important in these areas due to unrestrained grazing of domestic livestock. Land development in terms of gully plugging, earth and stone bunding and levelling were the second most tiring work for us. It took almost 5 months of rigorous work to complete fencing and land development”, adds Buda. 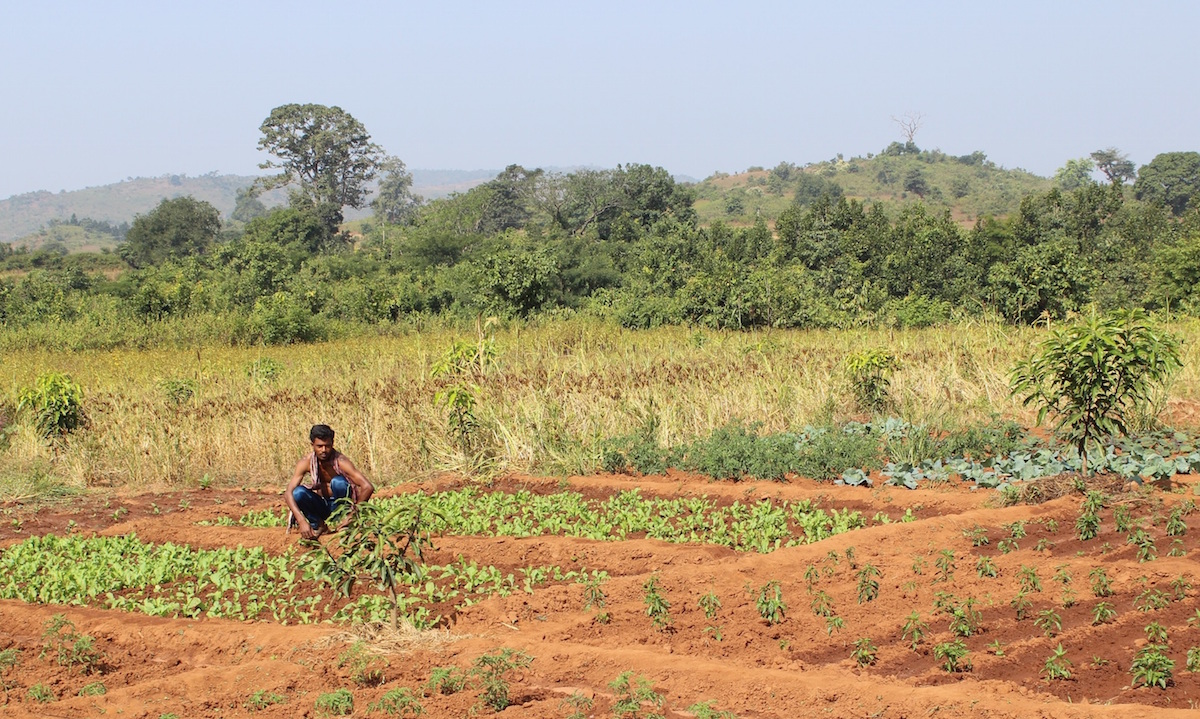 Buda Majhi working in his farmland intercropped and mixed-cropped with vegetables, pulses, millets and orchards

One of the interesting facts is that Buda has been preserving and multiplying many traditional varieties of crops. He has multiplied proso and kodo millets which were earlier preserved by only a handful of farmers in his village. Similarly, he has also preserving indigenous varieties of vegetables like tomato, chilli, brinjal and a host of tuber varieties. Farmers of the neighbouring village often exchange their seeds with Buda. 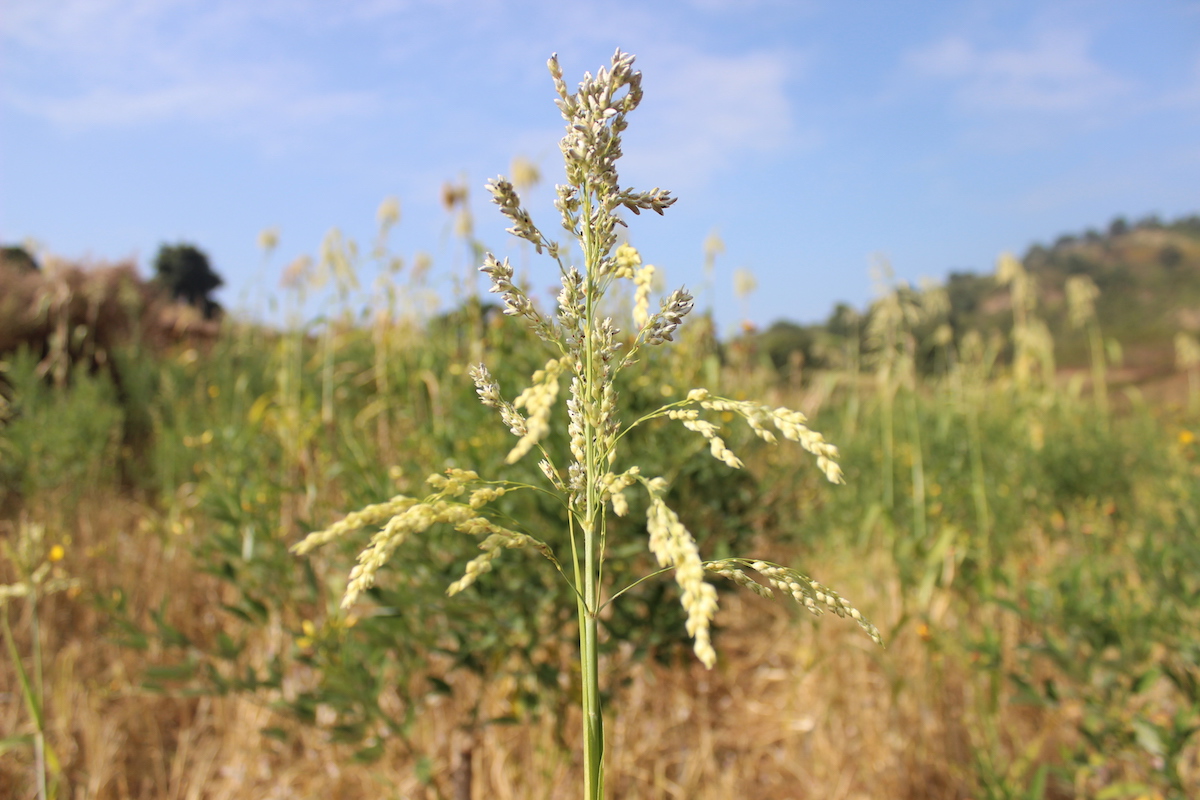 Proso millet revived back once again

“Millets required very less water and can withstand a certain degree of soil acidity and alkalinity, stress due to moisture and temperature and variations in soils from heavy to sandy infertile. Millets are also hardy and can be termed as pest-free crops. Their long storability under ordinary conditions has made them popular as famine reserves. Millets is three to five times nutritionally superior to the widely promoted rice and wheat in terms of proteins, minerals and vitamins. From the environmental conservation point of view, millets sequestrate carbon and thereby reduce the burden of greenhouse gas emission”, emphasised Vidhya Das, Joint Director of Agragamee. 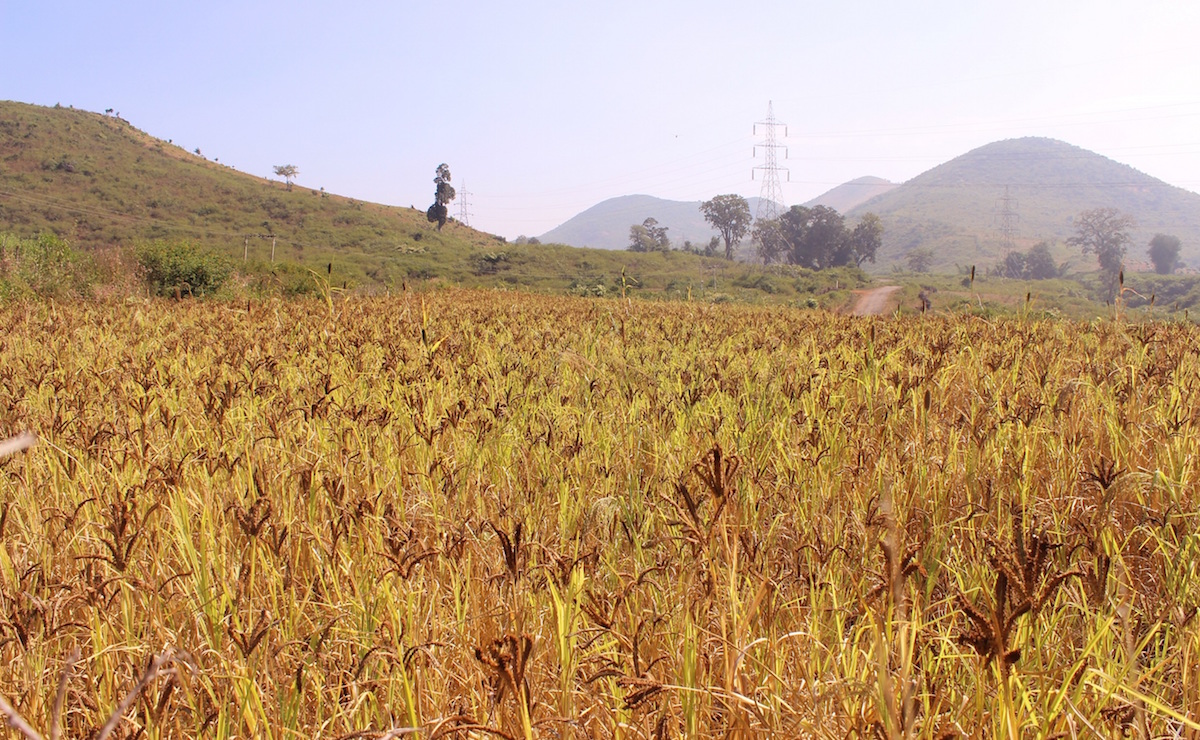 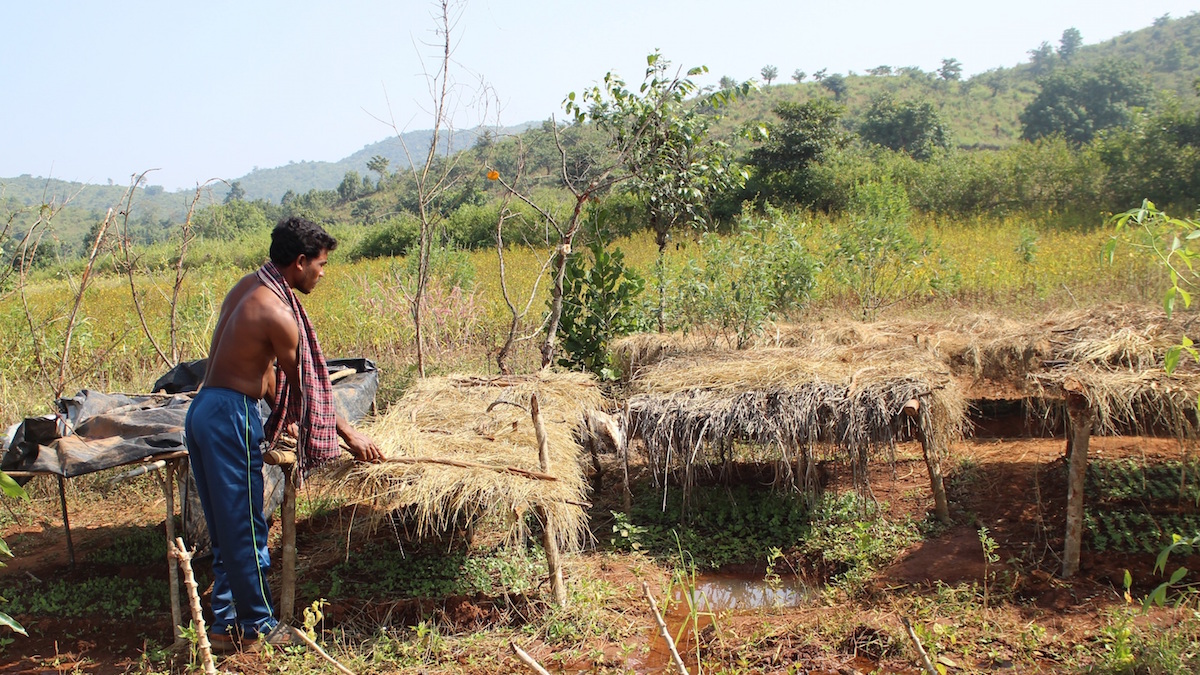 As applying organic inputs is one of the fundamental principles of agroecology, so farmers like Buda has been trained on preparing organic insecticide, pesticide and composts. A good example of this are the “vermi-compost sheds” established in the farmlands to provide manure and increase soil fertility. “I have constructed a vermi-compost shed and have been taking care of it. The residues of vermi are very effective in increasing soil fertility. Earlier, the land was a bit hard, but as now I have been using farmyard manures and vermi-compost, the soil has turned soft. The yield has also increased”, giggles Buda while showing vermi. 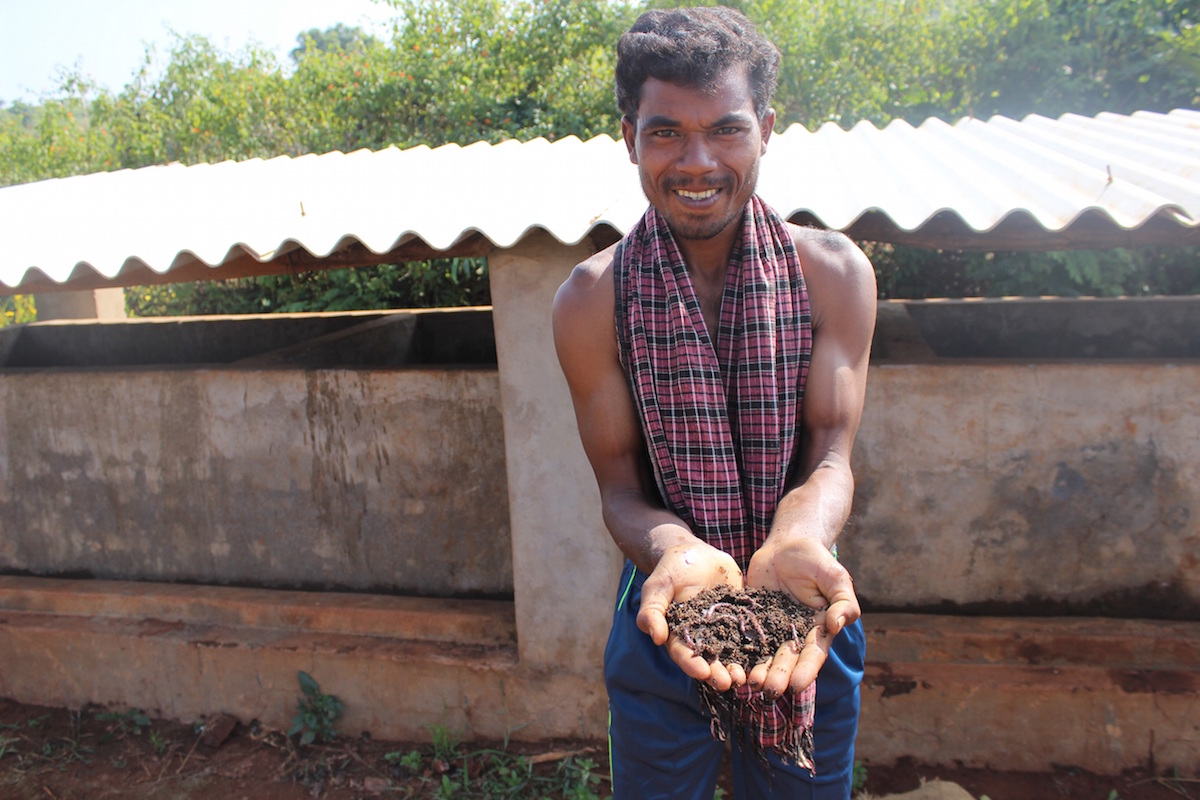 Buda Majhi showing vermi in front of his vermi-compost shed

Similarly, Ramnath Majhi is a successful farmer of Tala Chobri village in Thuamulrampur block. Majhi has a keen interest to grow a range of creepers varieties of vegetable crops. He says, “For the last 3 years, I have been growing bottle gourd, bitter gourd, snake gourd, pumpkin, cucumber along with mango and cashew. Most of the vegetable varieties are indigenous and I select best matured seeds each year. Creepers grow very fast and require less labour to grow. It also fetches good price in the local markets”. Creepers also prevent soil erosion and replace nutrients in the soil. 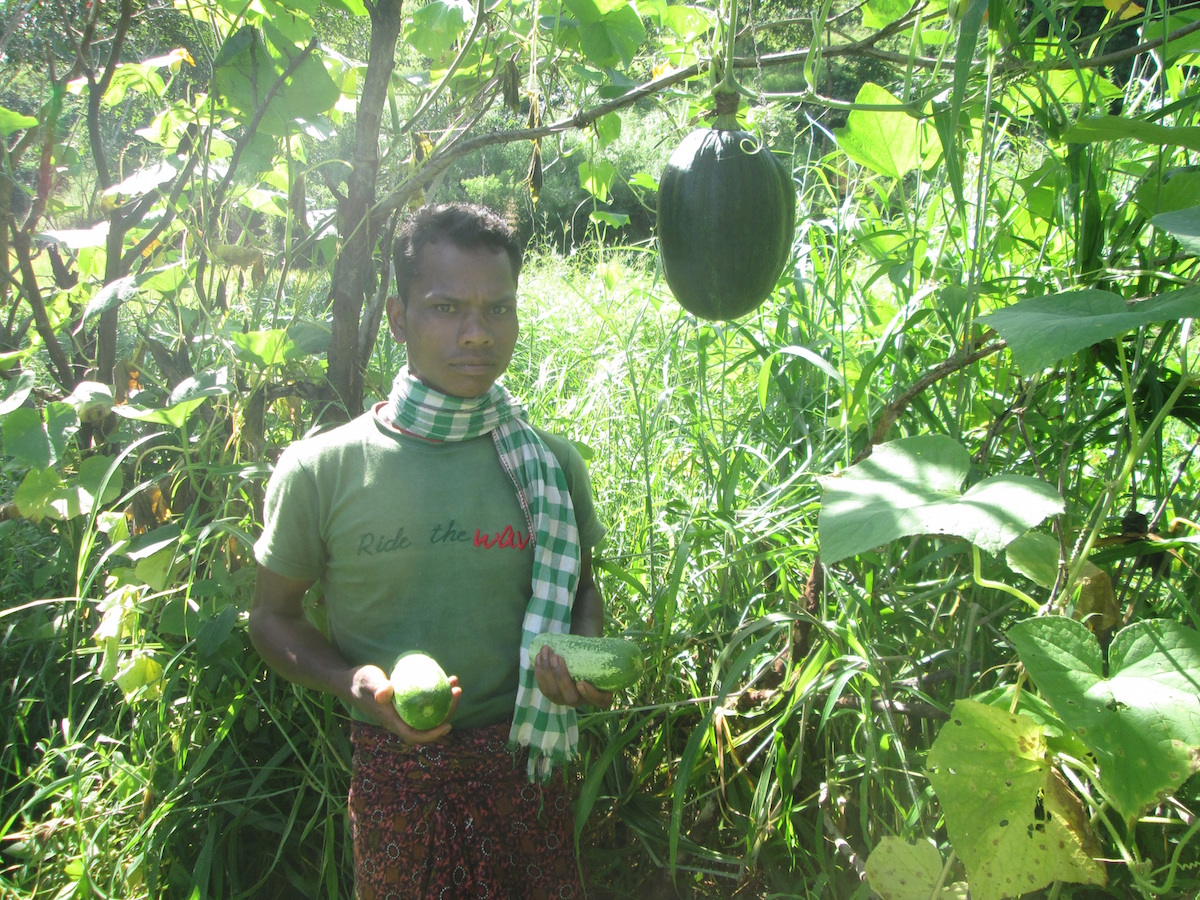 Majhi further shares “I use organic mulching on my farm. I collect straw, leaves, cut grass, and leftover of harvested crops and keep them on the base of fruit plants and vegetable crops”. “Mulching has multiple benefits such as it keeps the soil underneath moist longer than bare soil and prevents evaporation, control soil erosion by cushioning the impacts of raindrops and by slowing runoff, prevent weed growth by shading them out, helps maintaining warm temperatures even at night, improves soil structure and aeration and increase soil fertility as well”, explains Debesh Prasad Padhy, a senior horticulturist.

“Earlier, the land was barren, it was used to cultivate oilseed and millets once in a year under shifting cultivation. Initially, the yield was good and regular, but after some years, the yield reduced. It is only after constant guidance and facilitation from Agragamee, today, we could able to transform the fragile land into productive one. You can see, mango trees has already started fruiting, so also cashew and banana. Besides, we have been also growing finger millet, pearl millets, foxtail millet, niser, chick pea, pigeon pea and black gram in the commons. We also don’t need to walk miles to collect firewood now, because we collect the twigs and branches of forest trees planted in our commons itself” proudly says Ambika Chalan, a member of theMaligaon  Mahila Mandal. 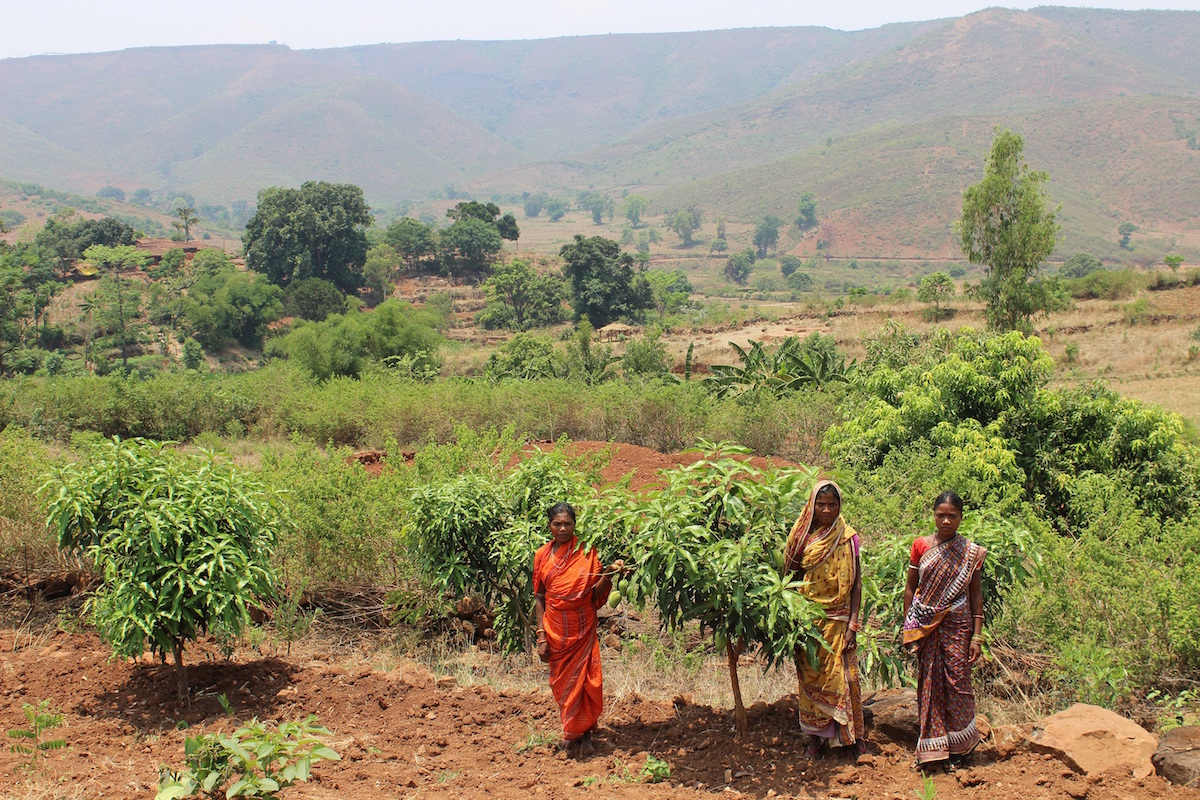 Members of Maligaon Mahila Mandal standing on their commons land

The indigenous farmers of Odisha have set up a benchmark in sustaining their livelihood through agroecological model of farming. In the process, the fragile and denuded landscape has been rejuvenated, the practice of shifting cultivation has also reduced to a great extent. Today, many traditional varieties of crops has been successfully revived and multiplied by the farmers themselves. They have realised that their traditional crops and use of organic inputs can endure recurrent climate changes.

The increased availability and consumption of diverse food crops like, millets, pulses, cereals, and fruits have increased the nutritional value of their food basket. Farmers are sellings the surplus agro-produces at the local market. This has strengthened their household’s economic pillars, many farmers have invested their farm income on purchasing cattle, sheep, goats and pigs for additional income.

One of the most remarkable impacts is the changing behaviour and outlook amongst the younger generation. They are gradually started showing keen interest and seeing a new ray of hope in farming as a sustainable livelihood option. More interactions and exchange of information are taking place between the younger generation and seasoned farmers,- as if the traditional wisdom of farming is passing to the next generation of farmers and one would hope this will continue for many generations to come…..

In general, all these impacts are apparently reflected on the face of the farmers, their family members and the landscape of the village. As Achyut rightly said, “Nowadays, farmers in the regions are smiling and they have a reason to smile…”.

Abhijit Mohanty is a development professional based in Odisha, India and works for Agragamee. He holds a MBA Rural Management degree from Amity University. Several of his works has been published in India Together, LEISA India, Neo-Agri Org. Follow him on twitter @abhijitumohanty

All photos that appear in this article were taken and supplied by the author.