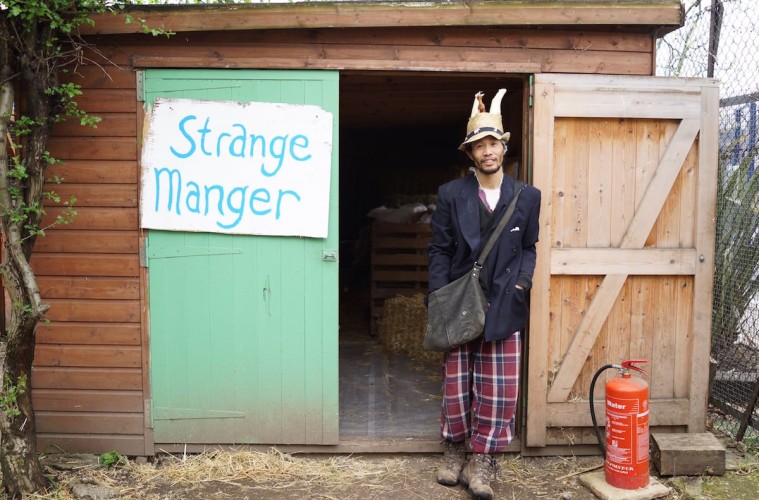 We visit Spitalfield’s City Farm in East London to photograph some of the highlights of the pun inspired alternative to The Boat Race and interview Anne Hopkins, one of the founders who came up with the concept 6 years ago. We find out about the origins of the event, how the winning time of ‘&’ compared to previous races and their plans for a special guest in 2015 (being the Chinese Year of the Goat)..

Read Interview
Can you give us a bit of background of how the Goat Race came about and how it's grown into an East London calendar favourite?

The Goat Race started where all great ideas start.  In the pub.  It was 2 weeks before the Boat Race, 6 years ago, and three of us realised we couldn’t be less excited about what was about to happen on the Thames.  We got from that basic realisation to the idea in about 5 seconds, mainly because there is very little that can actually race, and that also rhymes with boat.  As for how it’s grown into an East London calendar favourite, well that’s just down to wonderful British public.  It’s as if they’ve been waiting for this alternative to the Boat Race since 1829 when it first begun.  We can only apologise that we didn’t start it sooner

How much training do the Goats do in the lead up to the event and what sort of diet regime is undertaken?

The goats actually walk the track every day of their lives. The start line is in the field they are kept in during the day, and the end line is at their stables where they spend the night.  The goats couldn’t care less about the race itself though, so they don’t train particularly hard, and they don’t watch what they eat either.

What was the slowest completed race time on record, and what was the fastest?

This year was the slowest, with ‘&’ winning in 76 seconds.  The fastest was Cambridge last year in 57 seconds.

Have you had any disruptions or protests similar to that of The Boat Race in 2012? Any accusations of goating elitism?

You mean ‘bleatism’, surely?  But no protests.  And besides, the inclusion of ‘&’ is symbolic recognition of all other universities and establishments of further education.

The success of this race essentially proves that goats make very passable jogging companions. In what other ways do you think goats are more superior household pets than, say, cats or rabbits (both less than satisfactory sprinters)?

We’re not sure that assumption is fair.  The goats hardly ‘jog’.  At best, they ‘amble’.  If we had to choose between chasing a rabbit, a cat and a goat, we’d choose goat

We noticed a lot of pun related branded hoardings - what sort of support does the race attract from big name sponsors and how important is that to the animals that live at Spitalfields City Farm?

The race attracts minimal interest from big sponsors, apart from the occasional multinational FMCG brand wanting to completely rename and reimagine the entire day.  That’s not to say that for the right amount of money we wouldn’t let them (the farm is a charity, after all).  But they’ve never offered us much anyway, so we’ve refused them.  We do, however, have the very lovely Abelha Cachaca a sponsor that’s supported us from year 1, and Hendricks Gin who’ve come on board more recently.  They’re both ace.  And they sell booze at the race (also ace).

How has '&' been behaving since his win? Are the other goats more referential towards him and is he receiving any special treatment?

‘&’ is just pleased it’s all over so that he can get back to his studies.

With 2015 set to be the Chinese Year of the Goat, do you have anything special planned for the next Oxford-Cambridge Goat Race?

We’re going to invite Chinese president Xi Jinping as our guest of honour.  If he refuses, we’ll try Jackie Chan.  And if he also says no, perhaps Gok Wan?