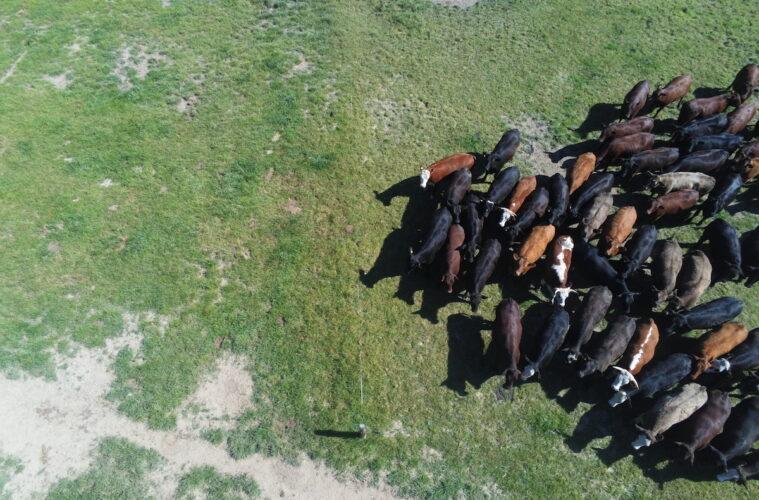 Sam and Becky Newington are equal partners in Limden Brook Organic, a regenerative farming business that rears and finishes store bullocks. Together they mob graze large groups of cattle, managing over 160 hectares of permanent pasture.

Work experience and returning to the home farm

Growing up on the family farm, Sam enjoyed helping his parents with their dairy enterprise and from an early age knew he wanted to be a farmer. After school he went to Plumpton College, where he received his agricultural diploma and commenced his farming career working on local dairy farms. During his twenties he spent a couple of years working on farms abroad in New Zealand and Australia. 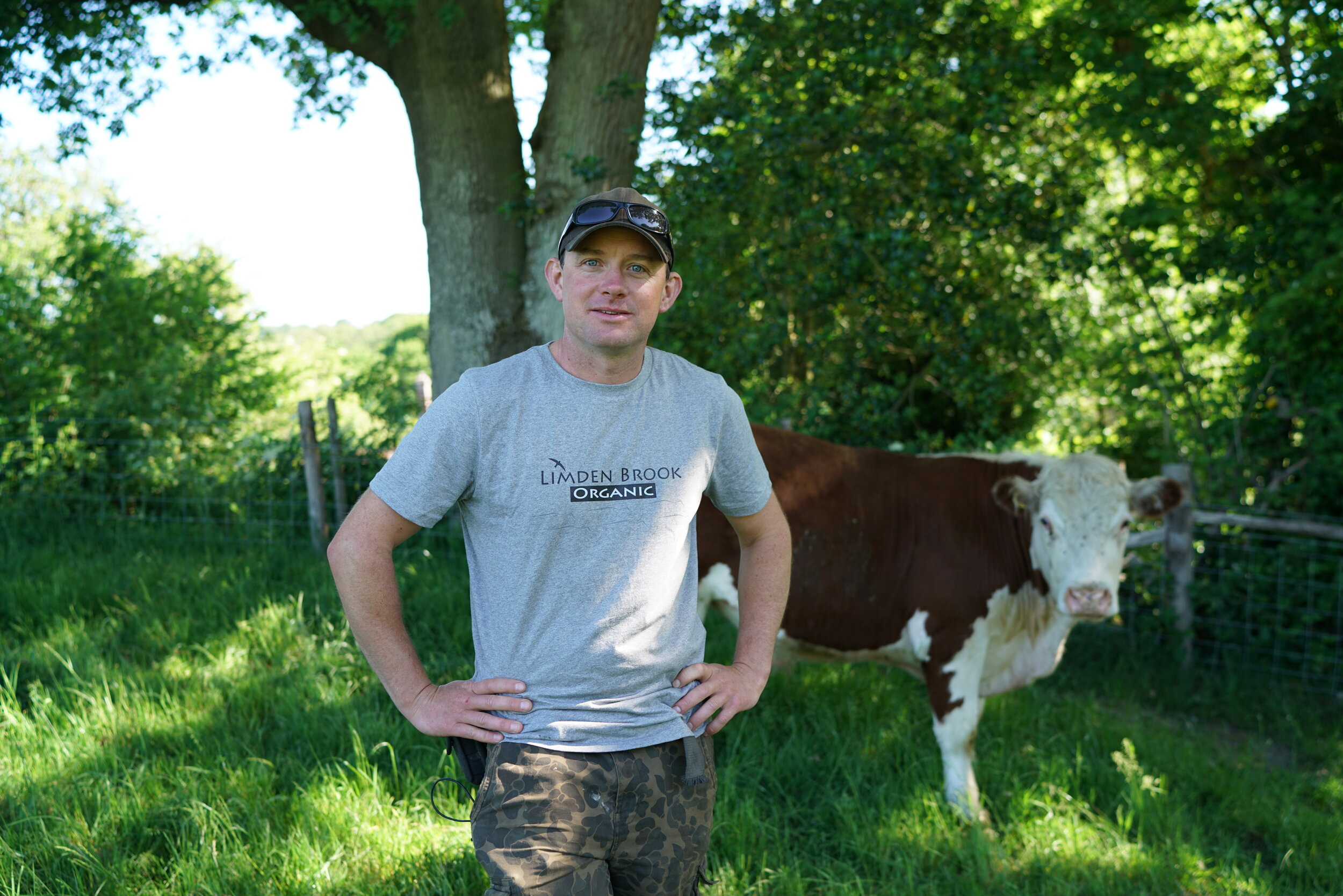 In 2012, he and his wife Becky moved to the family farm, by which time it was no longer a working dairy farm. His parents decided to sell their cows and their organic dairy quota, fetching a good price in 2006

They initially worked alongside Sam’s father, rearing and finishing store cattle, but struggled to make the numbers stack up. His father decided to retire from farming, with Sam and Becky becoming tenants six years ago.

Building up their own livestock

With some uncertainly around farm succession, they focused on building up their own stock, starting out with a small flock of around 120 old mule ewes. Over the years they have gradually built up their store bullock enterprise, buying in organic dairy bull calves to rear, as well as other older store bullocks to finish.

Last year they decided to get out of sheep, due to recurring foot issues, though Sam says they would like to start a new lower maintenance flock. “Ideally a self shedding breed with the aim of selling all the meat direct in boxes or individual cuts from the farm,” he added.

For now the focus is on improving their store bullock enterprise; a challenging business model to get right. “Six years ago we had a lot of problems and no solutions,” he admitted. In contrast, today he says they still have a lot of problems but a lot of solutions too, mainly down to the introduction of regenerative farming practices.

The catalyst for changing their grazing management was meeting up with mob graziers Fergus Henderson and David Cornforth on their farms in Sandhurst, Kent.

“It was fascinating just seeing what was possible with some infrastructure. Then everything I learned about regen ag (regenerative agriculture) and soil seemed to make a lot of sense,” he said.

Sam keeps his own carbon footprint low by not buying machinery that would stand idle for much of the time. Apart from a 1994 JCB he uses for winter work, he owns nothing, instead relying on a local contractors.

In Sam and Becky’s case, the family farming journey outlined in Gabe Brown’s seminal book Dirt to Soil really resonated, prompting them to learn more about the microbiology of their soil and how changing their grazing practices could improve their farm.

In practical terms, Sam and Becky keep the majority of their cattle in two large mobs of between 70 and 90 animals in relatively small paddocks, moving them on every 48 to 72 hours. 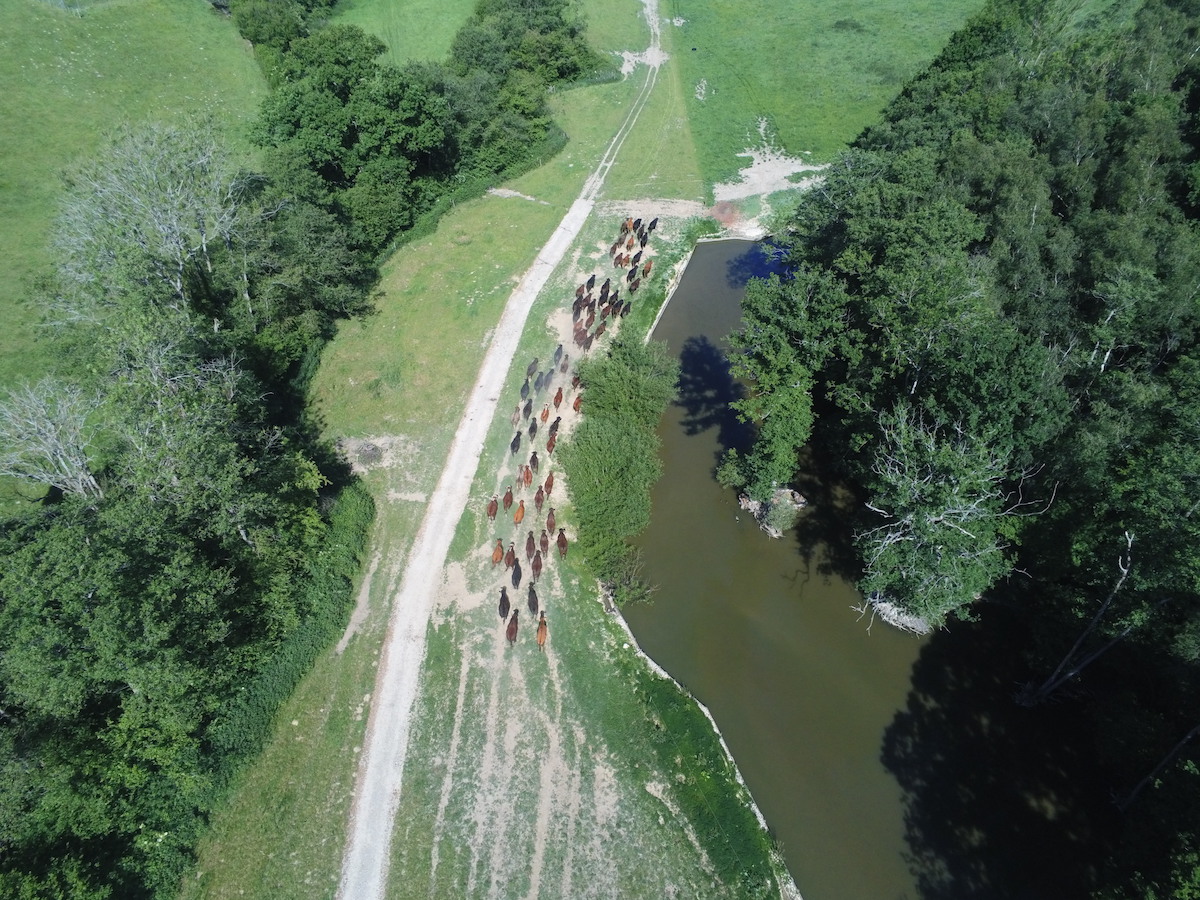 On the home farm they have a grazing platform of about 40 hectares and the average paddock size is one hectare, with most of the paddocks adjustable in size depending on cattle demand and feed availability.

They are currently going into a paddock at 3000kg dry matter and out at 2000kg dry matter, and Sam admits that due to the dry conditions there is less cover than he would ideally like.

The key to getting this grazing system right is in the planning and setup. Sam measures his grass using a plate meter to determine how much dry matter he has available and records the data into his Agrinet app (grassland management software) on his phone.

He is also part of the Grass Check program, a group of around 50 pioneering farms across the UK that are measuring grass growth rates and analysing their soil. Live data from these farms can be seen on the grass check website (www.grasscheckgb.co.uk) which includes soil temperature and local weather conditions.

Sam explained that in theory the cattle should eat a third, trample a third and leave a third before moving to a fresh paddock.

He believes it’s important to move the cattle on before they have a chance to eat the grass down below the ankle. “Leaving a healthy residual results in a quicker regrowth,” he commented.

It was fascinating to witness Sam moving his group of 71 cattle on the home farm. It was a quick and effortless process, with all the animals remaining very calm and moving from one paddock to the next in less than five minutes.

As with most things, infrastructure plays an important role. Sam sources all his electric fencing and water kit from Kiwitech, one of the leading manufacturers of equipment for grass ‘pastoral’ farmers.

The better the infrastructure the less time it takes him to set up the paddocks. “It takes me 20 minutes to check fences, move the water trough and set up temporary fences if I need to. I can plan a week ahead but normally do five days to make better use of time,” he said. 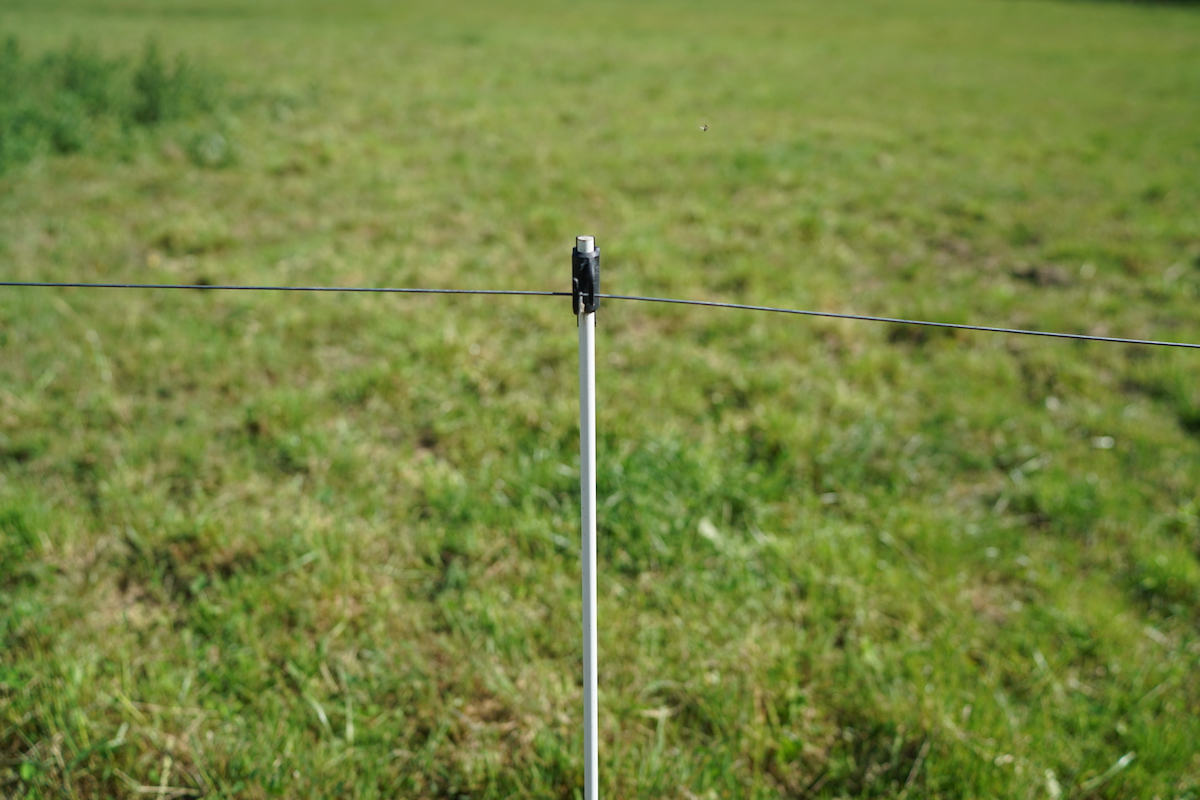 Asked about the benefits of mob grazing over set stocking, he explained: “You don’t have cattle grazing regrowth, which happens at anything over three days, so you are getting better grass utilisation and maximising dry matter yield.”

Sam and Becky have also found they are able to turn out earlier and not house them until later in the autumn/winter (depending on weather conditions).

Another advantage of a longer rotation is making the land more drought resilient and helping extend grazing into winter. They are also beginning to see small improvements in the soil year on year.

This year they turned out in February by protecting their minimum grass cover to give them maximum growth in early spring when the grass is at its most nutritious. Interestingly Sam said it takes cattle up to six weeks to adapt from the winter sheds to grass, so the sooner they can be turned out the better the daily live weight gains are.

Experimenting with out-wintering and dung bettles

This winter he experimented with out-wintering a small group of cattle. He pointed to a few of the out-wintered ones amongst the larger group. They certainly looked to have more condition than similar cattle that had been housed.

Following Sam around the pasture, he stopped to inspect several cowpats, kicking off the dry crust to reveal dung beetles busy at work. He said that it can take as little as three days for them to completely obliterate the dung and take it down into the soil, all part of a healthy soil web. It’s interesting to note that a teaspoon of healthy soil contains more bacteria than there are people on the planet.

Earlier in the year a PhD student recorded dung beetle numbers and activity on the farm, while a visit from a group of dragonfly enthusiasts resulted in a mention in the nationwide Dragonfly Newsletter.

Sam was also invited to the Sussex Wildlife Trust conference as one of its farmer experts talking about mob grazing to ecologists. Sam was pleased to report that most of them were not anti-food production and were in favour of regenerative farming practi

Building a brand and selling direct

To help build up their direct meat box sales, Sam and Becky recently had a professional logo designed to reflect their name and farming practices. The logo depicts the Limden river that runs through the farm and the mob of cattle with a flock of swallows following them. The next step is to launch a website, which they are working on themselves. Readers can also follow their journey on instagram via @limdenbrookfarm.

It’s early days, but so far they have sold a couple of their animals in 10kg beef boxes, as well as selling between 25 and 30 animals direct to local butchers and other farmers selling to the public. This is something they are keen to expand on.

For other farmers looking to learn more about box sales and grazing management, Sam recommends joining the Pasture for Life Association (PFLA) discussion group. Farmers don’t have to be 100% grass fed to join the group and Sam said he had found many of the topics discussed in the forum very helpful.

Sam and Becky are not PFLA certified because they have to buy in rolled organic wheat to feed during the winter months, alongside hay and silage. Without this they wouldn’t be able to maintain the energy level requirements needed, especially for some of the larger framed dairy crosses, effectively preventing animals going backwards.

Plans for the future

In the short to medium term, Sam and Becky are passionate about refining and implementing regenerative farming practices on their farm with the ultimate goal of increasing their stocking density as they continue to improve grass yields. Sam said they would also like to start a suckler beef herd one day, too. I look forward to following their progress and catching up with them in the future.