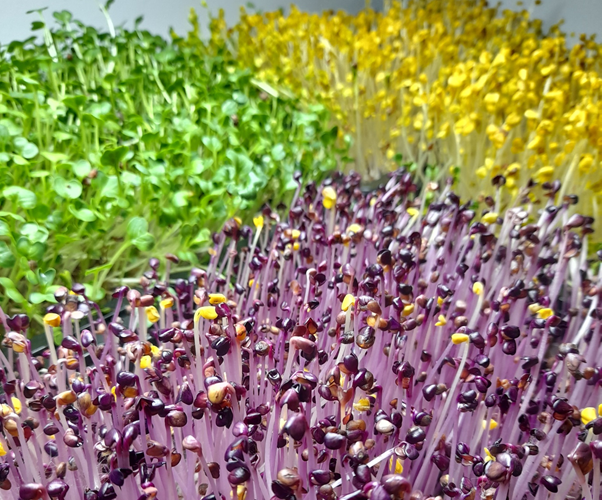 How to start a microgreens business from scratch

Ever considered starting a microgreens business from your living room? With no prior experience Oliver Rubinstein did exactly that. Here’s his story.

The internet is filled with people who have got around a lack of access to land, in new and innovative ways. I remember stumbling across some YouTube videos of urban farmers in North America and I was transfixed. In some cases, there were people turning over hundreds of thousands of pounds from back gardens. However, it was when I started watching videos of microgreens farms in people’s basements that I started to get really excited.

If when I mention microgreens, you look blank, you won’t be alone. Until recently I was vaguely aware that people were growing densely sown trays of young plants to harvest as salads or garnishes but that was it. In fact I confess, I thought it was more of a novelty and just a way to grow garnishes for high-end restaurants.

Essentially, microgreens are just densely sown salad crops, harvested just as the first true leaf emerges. Recently, their popularity has grown due to their nutrient density, flavour and versatility. However, it’s equally as possible to use them more liked bagged salads and their short growing cycle makes them the ideal crop for an urban farm. 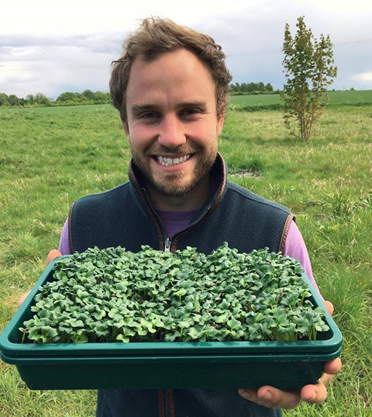 Why a microgreens business ticked all the boxes

For me, a microgreens business ticked so many boxes. A short growing cycle, visually attractive, relatively niche and crucially, I could grow them from my own home on racks of shelving. Although people do grow microgreens full-time, I have a day job which I love and will not being giving up any time soon, so any enterprise needed to fit around that.

Learning the basics from YouTube videos and sourcing the gear

The idea was born. I was going to be one of these pioneering urban farmers too. However, almost all the videos I’d watched were from North America, so not only were all the units different, many of the products like the trays, simply weren’t available here. To add to the complication, it was at this point that lockdown hit. Not to be put off, I managed to cobble together some LED lights from Screwfix along with some basic wooden shelving from Homebase and set about sowing some trays of seeds. 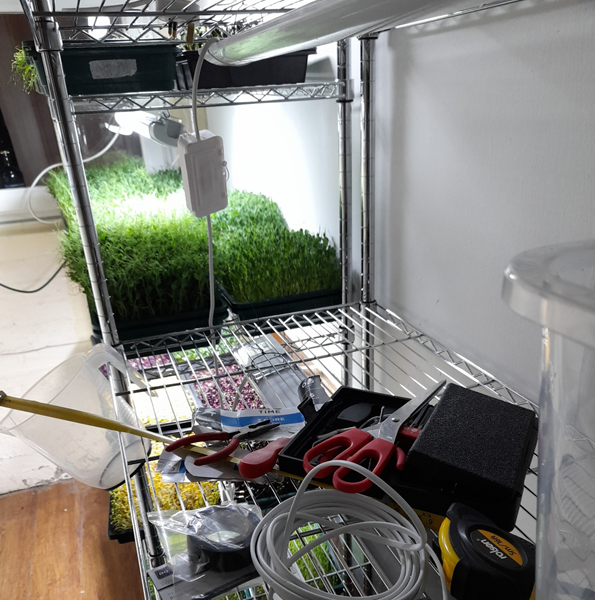 Despite the simple process, there are a surprising number of variables when growing microgreens. Seed density, growing media and watering schedule are key. Get this wrong and you end up with no crop or a mouldy mess. After a few weeks of trial and error, my consistency improved. What next then? From the outset, my goal was to produce food to sell. I was sceptical about what the local interest would be as well, especially in the middle of winter. Tentatively I put some feelers out on social media, offering people free samples.

That’s when Roar Salads was born. I won’t detail the rest blow by blow, but within a few weeks, I went from free samples, to an online shop, social media pages and my first restaurant customer. I bought packaging – and learnt how difficult it is to avoid plastic. I also bought labels – and realised how easy it is to design and print your own. This was where the real learning happened. Things like how to deal with customers, how to plan for the coming week, how to price things and how not to undersell yourself. Growing the crops was the easy part.

It was important to me that my environmental credentials stacked up as well. Plastic-free packaging for salads, is just the tip of the iceberg (as any grower will tell you). I was also faced with the dilemma of what growing medium to use – something that can be composted and used to grow other crops is a priority for me.

Microgreens are still relatively new to most people and you almost have to create the market yourself. They taste incredible and are nutrient-dense. However, I think that people started to buy from me just as much because of the fact that it was local and authentic, not to mention the novelty of having it delivered by bike. I was quite prepared to pack up if needed, but 9 months have passed since those first samples and I now have customers with weekly subscriptions, a farmers market stall and offer a range of products.

Is it real farming? Who knows? As, a model for people who want to get into food production with low startup costs, there is a lot going for it, especially if you already have a suitable growing space. On the other hand, the crops you can grow are limited and although scaling up is simple, the overhead costs quickly mount up too. I did the maths on how many bags of salad I would need to sell to pay for a shipping container farm and almost cried! In the immediate term, a recent house move has allowed me to double my production without the need to rent any space, but who knows what 2021 will bring!