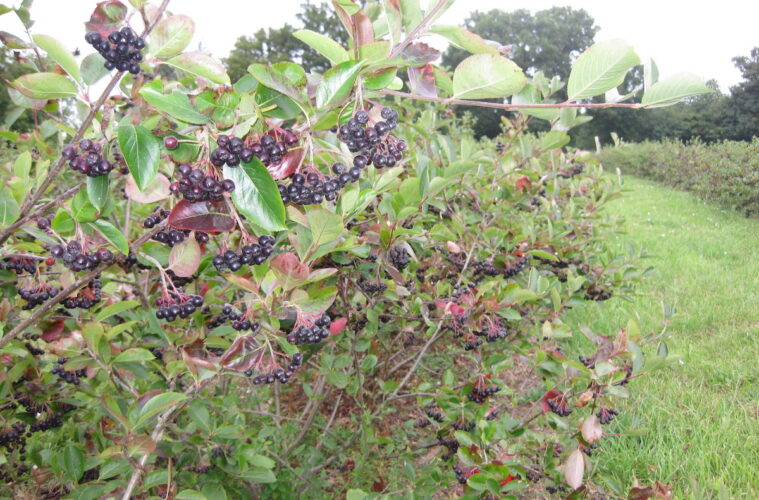 Interested in growing Aronia Berries? We meet Kent based grower Andrew Tickle to find out more about his latest farm diversification venture.

Since the mid nineties Andrew has completed several farm diversification projects, mostly related to converting agricultural buildings to light industrial, residential and leisure uses. With little farming activity remaining on his farm, it occurred to him that he needed to find a farming venture, that involved producing food.

Getting back into farming

Having discounted a number of cereal and vegetable crops due to the impractical access of his land, Andrew narrowed down his list to hops, grape vines, and fruit bushes. He decided that fruit from bushes was the way forward. After some extensive googling he discovered the Aronia Berry.

What are Aronia Berries?

They are a berry native to the United States and came across to Europe in the 1950s where they have become an established crop. The EU production of Aronia berries in 2015 was an estimated 60,000 tonnes. To his amazement no-one in the UK has ever heard of them.

Keen to learn more about growing the berries, he enrolled himself on a horticultural degree course at Hadlow College, studying the plant science module.

“There was no point in going small,” said Andrew. In the winter of 2012/2013 he located a nursery in Eastern Poland and imported 2000 plants at a cost of £1 each. Enough to cover one hectare. An additional one hectare was planted the following winter to create a viable commercial operation. 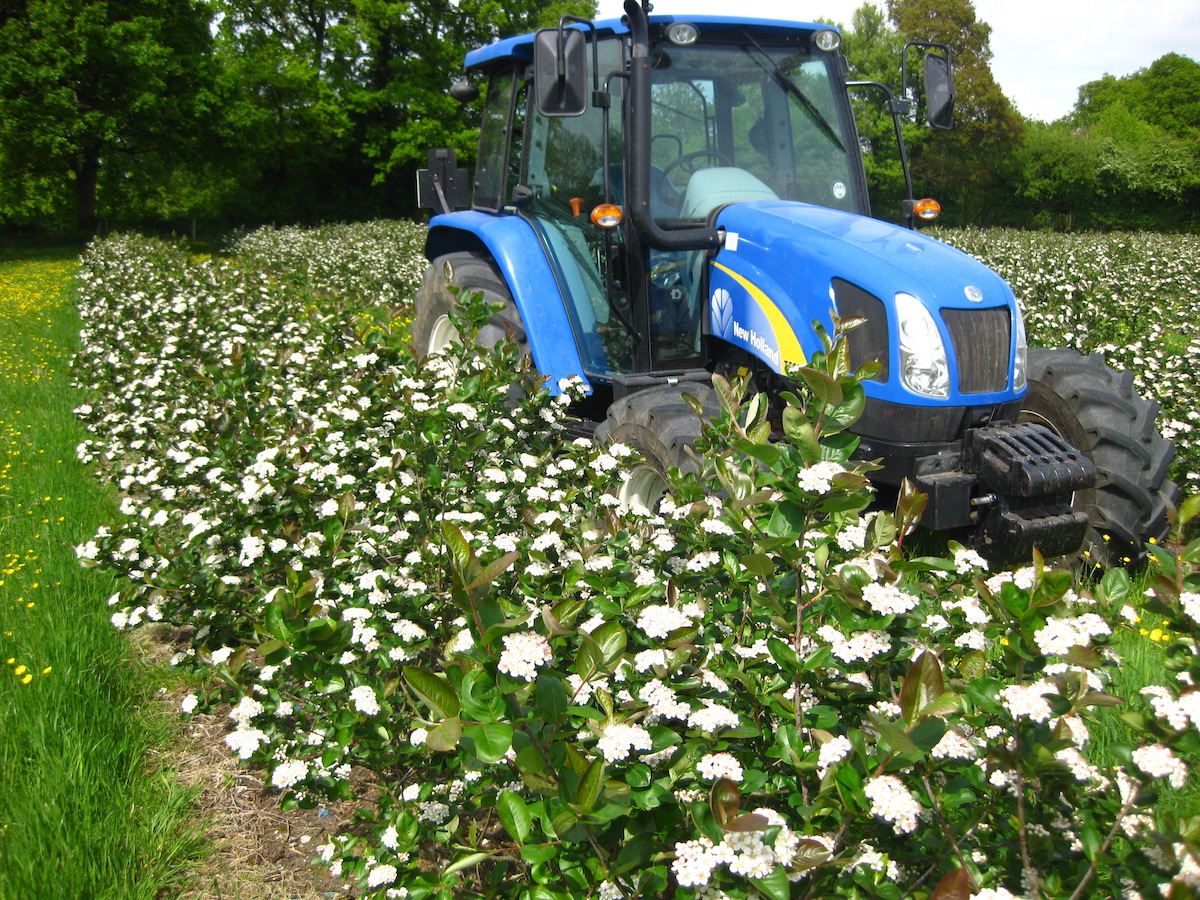 Given there was no reliable data regarding the growing of these berries – he decided not to go down the organic route.

“This was more of an insurance policy as we had to be able to control pests in the event of an infestation and were also mindful of the need to control weeds whilst the plants were young,” Andrew explained.

The nursery that sold him the plants guaranteed every one would grow. Planting required the use of a subsoiler and a PTO auger. Plants were spaced at 900mm intervals in 4 meter rows. In addition a PAS100 compost was used to improve soil fertility.

After planting Andrew was told to cut the stem of each plant off at 8” to stimulate root growth and encourage branching. As promised the plants grew well. It took three years before the plants were mature enough to harvest.

Get some infrastructure sorted. Learn to grow, process and market the berries

During this time Andrew applied for permitted development to erect some buildings to provide the infrastructure for his new project, but the application was rejected as ‘irrelevant’. That said, when he applied for full planning permission his application was approved, and the buildings are now built and in use. 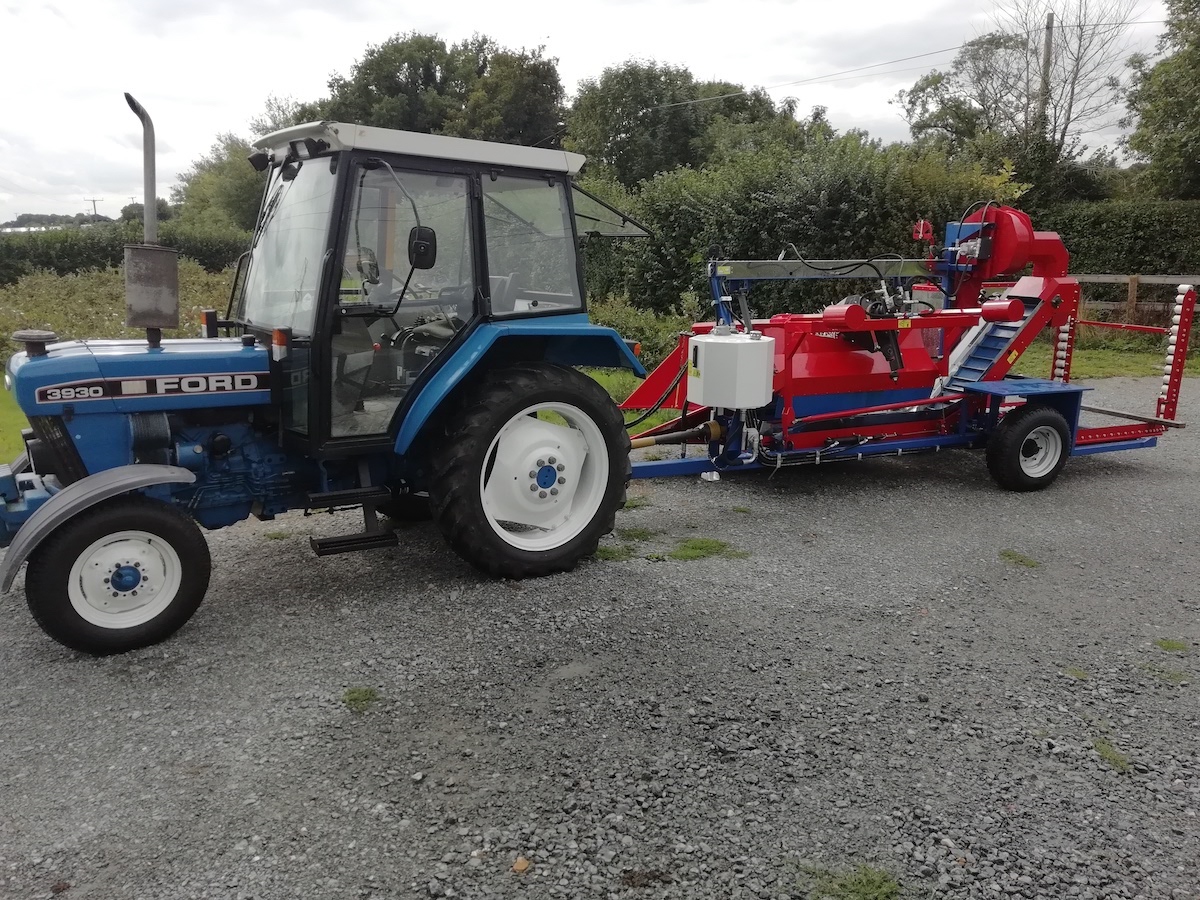 Learning to grow the berries took three years, but the challenges are ‘on going’ he says. For example the plants are now too big for the harvester and pruning the crop is now being trialled.

A key economic driver of the project was that all the work had to be carried out by Andrew from his tractor seat. So machinery had to be sourced and purchased to achieve this.

Once he had a supply of berries he had to learn how to make his 100% pure Aronia juice, establishing facilities and procedures to manufacture the juice at the farm.

Andrew admits selling his juices has been far from plain sailing. The main problem being no-one knows what they are or how to use them. Initially he tried getting them into retailers and achieved SALSA accreditation. This was in order to present a retail ready product to the supermarkets and local shops. Though he soon discovered there was very little demand for them.

“There was no point in ‘chucking money at it’ to improve the marketing and sales as the iceberg was too big to melt” he said.

Get on the Internet and send your product direct to customers

With his sales options narrowing Andrew decided to setup a website www.aroniaberriesuk.co.uk and online shop with PayPal to sell his juice online across the whole of the UK.

Aronia Berries in a pouch

“Fortunately for us the internet exists and we were able to reach our customers throughout the whole of the UK. If you consider that you cannot ‘Google a word you have never heard of’ no-one was ever going to search for Aronia berries. That said, the people who did know that they were looking for Aronia berries were both knowledgeable and keen to buy,” he said.

Andrew now sells only via his website and relies on customers to spread the word to friends and colleagues. He sends all his products out by post direct from the farm.

Use sales metrics and optimise your site for smart phones

One tool that has really helped shape his marketing decisions has been the reports from Paypal.

“They send me monthly reports regarding who and how my products are sold. They also provide tools to create graphs, trends and profit forecasts,” he continued.

Since upgrading his website to be mobile friendly Andrew has also noticed a large rise in sales (48%) from smart phone visitors.

Talk about the health benefits of your products

According to Andrew all the research concerning the properties of Aronia berries concludes that they have very high antioxidants potential and that they can be considered as a functional food containing both anthocyanins and catechins.

Without getting too technical Andrew tells me that it is the antioxidants that help to maintain cell fitness and health over the years, and it is the high levels of polyphenols (some of the most powerful antioxidants) that are used in medicine to treat certain conditions. You can find out more about this on Andrew’s website.

Andrew is also proud of the fact that in 2016 he won three awards at the UK Grower Awards including winner of the Specialist Fruit Grower of the Year.

In addition to his online sales Andrew sells some of his berries to a soda drink producer in Hackney; they manufacture bespoke sodas for the soft drinks market in the East End of London. The drink they sell with his berries is Square Root “Pear and Aronia” and can be found in bars and clubs.

Try selling them to Europe (while you still can)

With a long list of contacts throughout Europe, Andrew attended Tavola Food Expo with Produced in Kent to explore this market. He has found that selling to retail customers abroad has proved to be difficult. The trip did help raise his profile internationally. Two farmers from the Netherlands and Belgium has since visited his plantations as part of their farm diversification research. Both of which have now established Aronia plantations in both countries.

In addition Andrew was recently visited by an Aronia Grower from Denver, Colorado. As a result of that visit he was invited to the Mid West Aronia Growers annual conference, Omaha, Nebraska in March 2020 as the key note speaker.

“There are some things I cannot do” he admits.

Andrew uses the services of Mandy Smith of RPR (positive communications) based in Whitstable. They have recently launched a new Business Facebook page called Aronia Berries Worldwide to promote the Aronia berry to the wider community, with the aim of ‘reducing the fragmentation in the industry’.

Andrew has strong links to two other niche berry growers. Seth Pascoe in Cornwall who grows Sea Buckthorn and Sophie Sideaway in Worcester who grows June Berries (Saskatoons) with whom he communicates regularly.

Berries can be profitable but you need to do everything. And continue to improve

Andrew says he receives around £10,000 per hectare from his berry business. He also adds that for it to make financial sense “you need all the links in the chain”. On the question of expansion he plans to work on improving his current yield which is currently about five tonnes, and has been experimenting with drip irrigation on some trial plots.

On the invitation of Alan Harvey, head of horticulture at Hadlow College – Andrew has been delivering a ‘Niche and Novel Crops’ lecture to final year students over the past five years.

“My principle advice to them is understand that there is a world of difference between growing a crop and of selling a product from that crop. Stick to what you know, if you are a competent and enthusiastic grower, then that is what you should do,” says Andrew.

Talking about his own experience selling berries he says “I am my only blockage in my Aronia Berry project. I do not like selling or visiting retail units to do tastings or presentations. It is simply not my bag.”

Andrew sees his job as ‘keeping the conversation going’ and plans to employ staff when he has gained enough traction and confidence that his costs will be met by his sales. Until that time he says he is happy with the steady growth in awareness, and that the sales figures are an accurate reflection of his market place.