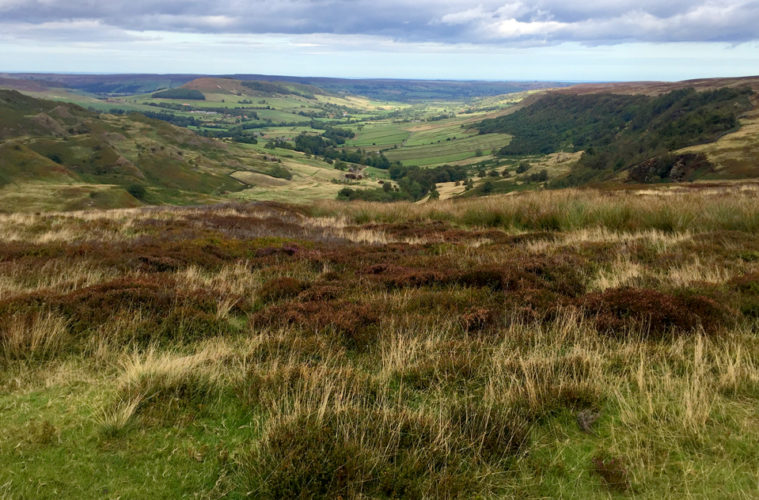 The Carbon Farmer: a vision for UK Peatland conservation, agriculture and climate action.

Recently released by producer Andy Clark the short film The Carbon Farmer provides a timely and important contribution to the debate relating to the future of the British uplands. At its heart the film aims to tackle a key climate problem. In their current state the UK’s peatlands are a source of around 18.5 million tonnes of CO2 (equivalent) per year – this is the same as the yearly emissions from electricity use in two and a half million homes. Clearly there is a huge issue here and it cannot be something that we shy away from. At the same time, there are numerous cultural issues when it comes to talking about change in the uplands, particularly in relation to land use change and moving away from the type of agriculture currently practised. In short, the film suggests possibilities for achieving a brighter carbon future by changing the role of land managers in the area, but doesn’t suggest that identity has to metamorphise completely.

I was privileged to be involved in this project (in a very small way) from the start, speaking to Andy Clark before he started filming. Andy should be congratulated for putting together something that is thought provoking, approachable, understandable and visionary and that takes into account the views of a wide range of contributors.

“It should be enough to scare us into immediate and profound action, that the UK’s peatlands are currently undermining half of our annual national efforts to reduce GHG emissions from all other sources, but it’s just not that simple to completely halt all agriculture on 12% of the UK’s land. We have to provide a viable alternative to current management, that still provides food and employment but that, at it’s core, also fundamentally restores and protects these invaluable ecosystems. The Carbon Farmerdoesn’t have all the answers to those questions, but I hope that it helps get conversations going in the right direction. We need a future to look forward to, in spite of climate change.”

As I discussed with Andy at the time, it is vitally important that the cultural landscape of the uplands is not negatively impacted by land use change. I applaud the vision and especially the mission, but it cannot be revolutionary. In my mind the uplands without any sort of agriculture would not be the same, and I write as somebody who isn’t local to the area. It should live on in some way, and this is perfectly possible. The message in the film is one of adaptation not takeover. It places people at the heart of the solution, through land use adaptation, and the mantra of ecosystem services and payments for public goods. Land managers on the moors would be paid by the taxpayer to lock up carbon and manage the moors with carbon in mind. It is suggested that further funding might come from private companies looking to invest in positive environmental projects and works. At the same time, food production could continue, so long as the negative environmental impact did not tip the balance of the core aim: to create a carbon sink.

The film is set roughly 100 years from the present day and follows the story of a man whose family have been working the same upland farm, based on peat soils, for generations and have radically evolved in the face of climate change. In a world where tax payer’s money is used to subsidise work to maintain the health of peatlands for numerous public benefits, he and his granddaughter show what could be possible in the future – what we could gain, and what we could manage not to lose. Critically, people are still part of the uplands and they are valued for their important work. As Andy made it clear when we discussed the issue, this is not a calling for food production to leave upland areas completely, but a suggestion that the overall upland project should probably shift in favour of carbon capture.

The film has already had a positive response.

“The Carbon Farmer reveals a whole new avenue of opportunity for farmers of the future. Farming for carbon means that wet agricultural land which has traditionally been regarded as ‘difficult’… is instead transformed into prime carbon farmland which also provides multiple benefits for the whole of society”

Richard Lindsay, Head of Environmental and Conservation Research at the University of East London

“We hope the Carbon Farmer provides food for thought for our policy makers and heralds in a new era of sustainable peatland use. The national governments of the UK have all committed to peatland conservation and support the IUCN UK Peatland Strategy. This is very encouraging and makes the prospect of the Carbon Farmer more fact than fiction.”

Stuart Brooks, Head of Conservation and Policy for the National Trust for Scotland

The film release follows the recent Committee on Climate Change report that acknowledged the magnitude of greenhouse gasses currently released from the UK’s degraded peatlands, and also called for reductions in the production and consumption of UK beef and lamb, a controversial claim for the farming community, but perhaps one that we will have to adapt to as and when the market mood changes. Personally I have aspirations to expand my sheep flock in Essex, not fall back into decline, and when I mention this to people I receive mixed responses. However, it would never be the be all and end all. Ultimately I see us moving towards a system whereby different areas specialise in different land management goals, based on geography, climate and food or environmental needs.

The Carbon Farmer suggests a positive future for sustainable agriculture – both in upland peatlands and in the lowlands. The film supports the idea of ‘payments for ecosystem services’ as a basis for environmental management – a proposed alternative to the current Common Agricultural Policy – and explores alternative cropping solutions for lowland peatland agriculture (referencing (the currently fictional) ‘British Blue Rice’) alongside traditional grazing.

The film ends with the call to action:

“Climate Change is not science fiction; our policy on it should not be either. The UK’s peatlands are currently so degraded, they are a source of around 20 million tonnes of greenhouse gasses annually. Prioritise peatland restoration for climate, and provide a cascade of public benefits.”

For more information on peatlands and peatland restoration visit www.moorsforthefuture.org.uk

Ben Eagle farms on the Essex coast, blogs at thinkingcountry.com and produces the Meet the Farmers podcast. Alongside producing arable crops and raising lambs on the farm Ben and his family are changing the way they manage the farm, for example having created a saline lagoon by breaking a hole in the sea wall and creating new habitat and also growing a novel berry crop called sea buckthorn.