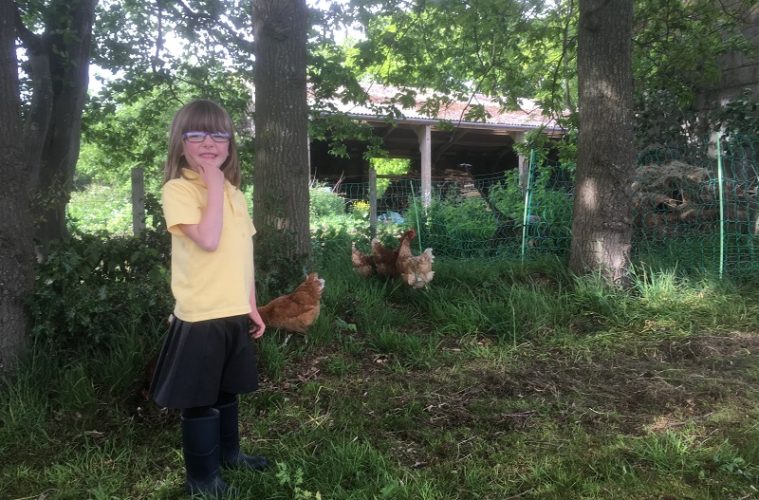 Cockhaise Farm: Growing In More Ways Than One

After months of negotiation I have finally managed to strike a deal with another farm to rear my youngstock from 6-18 months of age.  This will free up space here at home for us to accommodate more cows to milk this winter.  From 240 last year, I am now aiming to milk 280 with a view to have one final push up to 300 for next winter.  This is a big step change for us here at Cockhaise as we have always had both year groups of youngstock on the farm.  Having one less group will actually make life far simpler for the team here to manage despite there being more cows.  One of the main reasons for doing this is because of the sheer number of replacement animals in the pipeline, meaning that many were being sold to other farms rather than earning us money here.  There is still a big surplus in the amount of organic milk produced over the winter months here in the UK, so we will benefit from producing the bulk of our milk when the price is at its highest. 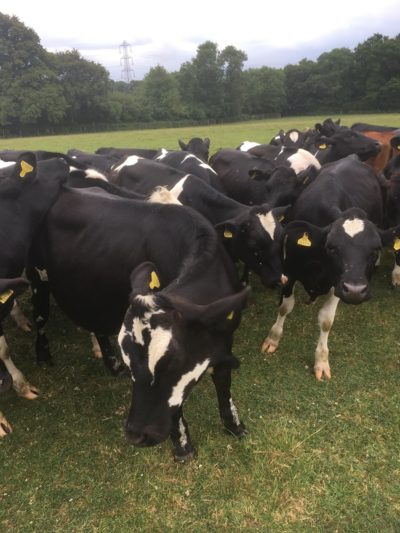 With the big jump in cow numbers my priority is to make sure that we can feed them all with high quality grass and conserved grass.  We are now in the process of converting more land away from the farm which can only be used to grow grass or crops on, therefore allowing me to graze more of the land around the dairy rather than cutting this for silage.  In fact, this year has been an amazing year for grass growth despite the fluctuating weather.  The cows have worked really hard since February and have produced a lot of milk mainly from grazed grass, with Luke’s management being exemplary.  He measures the grass growth every week and uses a grazing programme to see if we have too much or too little grass for the coming 10 days.  If he spots a shortfall on the horizon then we will add an alternative feed source to slow the progress of the cows around the grazing paddocks.  The drought we faced at the end of April was just such a case, but the rain that arrived in early May turned things around very quickly, just as the 2 inches we received earlier this week has done.  We have therefore had a bumper crop of grass so far and are looking forward to the challenge of the winter ahead.  Just to round things off nicely we won the West Sussex Grassland Society grassland management competition for the first time and now head into the regional final.

We carried out a full farm soil test this spring to get a base position for future improvements to be built upon.  The results made for excellent reading with soil health traits nearly off the scale, particularly soil organic matter which was high across the board.  Soil organic matter is such a key indicator of how resilient and healthy the soil is.  The higher the level the more rainfall can be held there and utilised in drier periods for instance.  However good the results, we should have good levels having mainly grass which tends to be in the ground for a number of years and which gets regular fertiliser direct from the cow!  With that in mind I realise that we still have some way to go to fully activate our soil here.  I feel that having just one species of animal on the farm could be holding us back and that, just as in our mixed grazing leys, we need more variety above ground to help the fauna below. 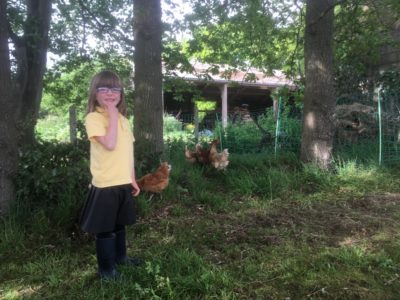 Molly getting to grips with our new neighbours

Dad and I both feel that one of the best ways of doing this will be to have a flock of chickens that follow the cows around the farm during the grazing season.  They will benefit the land by spreading out the cow pats in the field, eating the fly larvae and putting their own form of potent compost back on the land!  The one main stumbling block to all of this is glaring lack of experience in managing chickens.  Therefore we have a small flock of 5 hens in the garden now to enable me to get to grips with them on a smaller scale first.  Other than digging big holes everywhere they have been easy to manage and look after, with the added bonus that the kids can also help out, something that is really hard to do with bigger animals.  But before I go any further it’s imperative that we find a route to market for either the eggs or the meat otherwise this will end up being an expensive experiment.

Also on my to do list is to find out more about the humble dung beetle.  I thought they only existed on the great plains of Africa and North America but I have just found out that many species live in the UK as well.  I’m sure that they’re not everyone’s cup of tea but they play a crucial role in recycling nutrients back in to the soil, something that I feel isn’t happening in places on our farm.  I need to find out why that may be and what I can do to get these vital creatures back up in numbers?

As we wind down for a couple of months, major changes are happening to our life on the farm.  After over 30 years in the farmhouse, Dad has decided that the time has come for me to take more control of the farm, thus allowing us to move in, as they head into our house down the road.  This is one of those situations that is more likely to happen in a farming situation so there is little advice on how to make a smooth transition out of a potentially sticky situation, but so far we are all still on speaking terms!  There is no doubt that moving out of the house we helped to plan is tough but we are all really looking forward to a new chapter in our life on the farm.

At the same time as this I have also taken on a full-time assistant for Luke.  Alfie is 18 and shows huge promise, which has enabled me to take a big step away from the day to day running of the dairy, leaving it in Luke’s very capable hands.  With Mason, a 14 year old on day release from school, Clare who’s been with us nearly a year and our student Eloise, we have such an amazing team on the dairy now, making it such a great place to work.