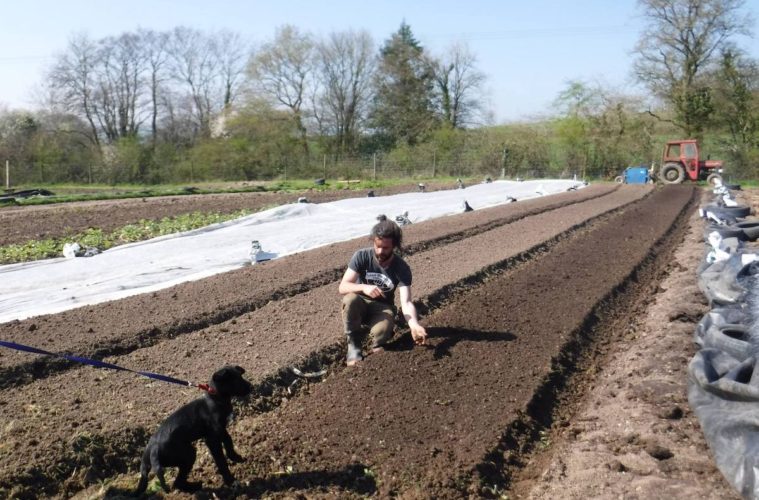 Whilst in the middle of moving farm sites, and waiting for various answers that were out of my control, I found myself with some time on my hands which would be a crime not to put to good use. In my case the devil makes work for idle hands! I came across a Market Garden course that was being run by growers from their sites. There are growers doing this around the UK but most of the sweet action seems to be coming from the South West. In Kent, there is very little sweet action! All my education to this point was running after tractors in the middle of fields asking farmers why my beetroots won’t grow, various books, trial and error and 99% luck. I tell a lie, there is always my natural ability and entrepreneurial flare that I’m still looking for.

I have visited various growers and larger scale operations but they were mainly flying visits and long emails afterward. I had in my mind a long list of sticking points and areas that I feel were harder to manage than they should be. Part of this I feel is the demographic and attitudes towards smaller growers compared to ‘people with real jobs’, which is definitely different in the South West compared to where I am in Kent, but as my market garden hasn’t gone bust yet something must be working, and I just had to iron out areas where the course growers clearly had succeeded. When it comes to learning, which must not be mistaken for ‘education’ (said by Mark Twain I think), an open mind is needed. Another saying I always toy with is ‘Do as you always do, and get what you always get’. As with any business that enters tender stages, both sayings never ring more true.

I had heard of Trill Farm and had met Ashley at the ORFC ’16, we didn’t have much time to chat so the first day of the course ticked my box as our operations were very similar. I’ll be honest I have never heard of Long Meadow Organics but they were field scale Organic growers which caught my attention. And I was very much impressed when I was with them on day two of the course. I had also chatted to Charles Dowding and read his books back to front more than once, and also visited Homeacres last summer ’16 briefly on a road trip. He used to run a No Dig field scale market garden back in the day when I was dancing to Simply Red and Erasure in nappies. I don’t remember much from those days so I was hoping he can fill me in on the underground No Dig movement!

I also remembered that I got roped into a walk in Scotland at the end of April from a train station in the middle of nowhere to the most remote pub in Britain. With this in mind I booked up a camp site to field test my survival skills and equipment and headed down to a campsite near Bridport. There was an option of staying at a place called Monkton Wyld where most of the course attendees were staying. A few traffic jams later and 4 ¾ hours in the car I arrived. I had stayed in my two man tent before in the garden, but a few nights in a row changes everything. Being 6’5 and just turning 30 does not help. The scenery soon made up for the aches, rolling hills and greenery that looks a more vibrant shade of green was enough to sooth my winging.

Trill Farm is a pretty sweet set up. Ashley and his partner were essentially looking after the land that wasn’t in proper use, something I was also doing and seems to be the way for a lot of people getting into small scale farming and when buying isn’t yet an option. There were 15 or so people on the course with a few coming and going throughout the weekend. Most of the attendees were toying with the idea of growing or taking their projects further and upping the scale. We went through pretty much every step even from things to consider before choosing land (something I didn’t account for when I started and am still paying the price to some degree). These things included planning issues, the aspect of land, and the thing that drives it all, the market. We checked out some crop planning and made our way to the garden. The mood was upbeat and it was interesting hearing other people’s struggles, but more importantly solutions and exchanging solutions.

The garden layout was very similar to my set up with added management methods being introduced, which is known as ‘Lean’. Small farms can be chaotic environments with so many variables dictating a growers’ actions and staff, Lean takes care of all of that by simply reducing waste. For example having to go and collect a tool that is in a lock up (or worst not where even the last person put it) to then take it to the job then taking it back. If all of those motions were eradicated, so the tool was already very close to the veg bed or chicken house, it saves time. So let’s say that tool collecting mission (ahh I hate looking for tools that was right there a second ago!) took 60 seconds and that motion was done 5 times a day already 5 minutes has been wasted, and it’s time no one can ever get back. Times that by 5 days a week (nearly half an hour, comes to say £4 in labour) and 50 weeks a year comes to over 20 hours. Ouch that hurts to think about. I’ve also used my time to Lean up all aspects of my farm and also luckily I’ve had the benefit of designing my new set up as lean as possible from Google Earth.

We looked at the propagation set up and an amazing array of leaves which goes into the Trill Farm Salad mixes, how they are planted, bed set ups, irrigation and seed saving. The day was awesome, lunch was awesome and I ticked off some questions I had.

The rolling hills and amount of cows was quite a site as I drove to Long Meadow Farm, when I arrived the farm had a long meadow and the name became apparently fitting. Hugh and Patsy were now slowing down their production of crops and possible open to the idea of another grower taking on larger scale veg growing in the future. Even though they didn’t have large scale production in action their words on the subjects raised were as fresh as when they started back in 1987. They had the dream set up, some land that came up and the right price for them, the rise in popularity in the Organic movement in the 90’s, the farm shop, campsite and house. The day started with Hugh taking us through how the farm was set up and how it used to run, then Patsy showed us how they grew their plug plants from seed to be ready for outside planting. We watched a short video of how production was back in 1999 and plenty of pictures which the farms set up. The couple’s ethos and my one aligned when we all agreed that we don’t really ever own land, we merely have the opportunity to do something with it and leave it in better condition for the next people.

I kept pestering Patsy on her inside knowledge of the force and her magical ways of dealing with wholesalers. They used to run a veg box scheme like I do but didn’t go all the way through the year. There were plenty of questions flying around as we walked through the green manure sections that Hugh after 30 years was still experimenting with. Real proof that you are never too old to learn, real proof that no one year is the same and that all you really are doing is managing energy on the land we farm. We then got to see the machinery and implements that have drastically reduced man hours in the day to day working on the farm, from planting to harvesting, clearing ground, terminating cover crops and crop protection and storage. Most of the tools Hugh was saying they had since the early days, and they were second hand from the 70’s when they bought them. Just goes to show proper tools you only need to buy once and are worth the outlay, maintain them and they will maintain your farm. There is plenty of machinery out there that does the job, some could say better or worst but proof again that if something isn’t broken, don’t fix it. Hugh also talked about a make of tractor that I haven’t heard of called Tafe, he was saying it’s never missed a beat and has all the improvements of a 135 Massey. The size of machinery they had was also interesting, it wasn’t large, but there were also still smaller options available. It raises the question, if you have to up the power of your machinery every few years, are you doing something else wrong with the land?

Charles Dowding is a renowned author and advocator of a method that is becoming popular in all levels of growing, from gardens and allotments to farm scale. No Dig (so cool it’s even got its own logo designed by Charles). I have felt for a while now that it makes more and more sense on every level, the more consideration I give it. One question I asked myself was where does nature dig? I’m still looking for answers, other than in the event of a natural disaster, it doesn’t. My own set up is now I’d say at least 75% no dig, sometimes referred to as no till, min till. Charles’ books worked their way into my collection back in my allotment days before I went into commercial growing. The day was full of information that would be useful to a grower either on an allotment size piece of land to larger field scale set ups. We covered everything from composting, harvesting, sales, crop protection, rotations, storing, seeding, hot beds, packing and touching on moon sowings and Biodynamics. Charles’s equipment was simple with his main tool being a copper hoe, and with the simple No Dig philosophy no fancy setups are required. The day came to an end as we finished off looking at photos from Charles previous No Dig market garden. We also took some souvenir cuttings from a perennial kale plant.