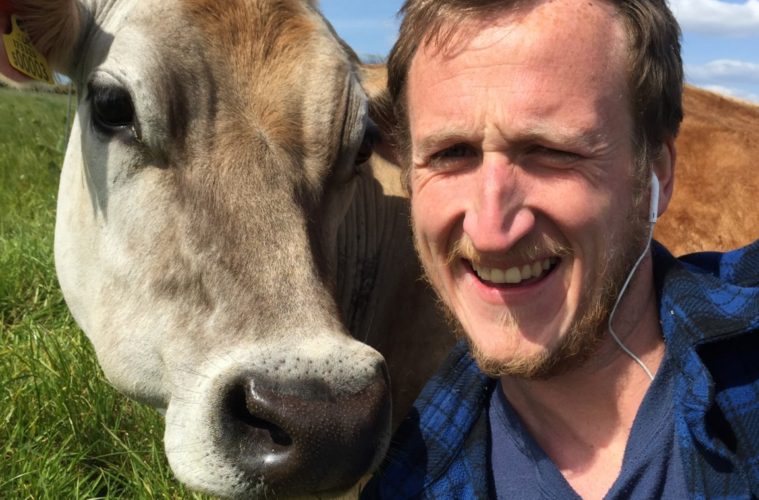 Alex Heffron is back with a bumper update. It’s all go with lots of work well underway for their first full season, preparing for their farm wedding and some other exciting family news..

It’s been a while since my last update on Indie Farmer, and that’s generally because we’ve been too busy getting everything in order for Spring and our first full season of trading. Now that Spring has sprung we are enjoying the first splashes of sunshine on our skin, combined with a month of dry weather which has allowed us to crack on with everything outside. Mucking out the cow shed, prepping the polytunnel and vegetable beds, setting up the electric fencing, constructing a cattle handling system, creating some calving pens, finishing the bottling room ready for raw milk sales, meeting with Environmental Health, along with plenty of other tasks.

I can honestly say this is the first year I’ve really noticed Spring — it’s one thing when you live in the city and quite another when you live and work outside everyday in a natural environment. With it my energy levels have increased dramatically, meaning we’ve gone from 8 hour days to 10–12 hour ones. It’s exciting observing the different flowers that open up around the farm. We’ve got daffodils, wild primrose, dandelions, daisies, cuckoo-flower, cow parsley, bluebells and others that we can’t yet identify. Spring has also seen the end of the mud!

It also sees us looking ahead to our first calvings — which start very shortly, farmers’ markets, selling raw milk, butchering our first beef cattle, and the increasing of our flock of hens. Along with that we’ve got the major prep work for our wedding taking place. It’s a busy but very exciting time. This is the year when it very much becomes a business and a fully-fledged farm. 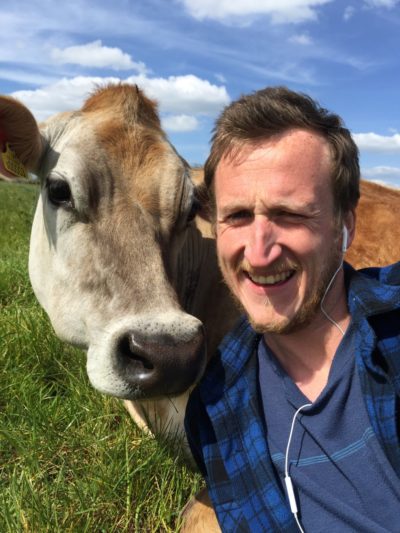 Prominently on my mind recently is the idea of community and what it really is. In our world that has a declining sense of it, how do we go about re-building it? We politely use the word ‘we’ a lot but who do we really mean when we say it? Who is ‘we’? It matters because otherwise it’s just another vagary, hiding behind obscurity. Along with this I also can’t help but ponder the idea of ‘self-sufficiency’ — a modern movement that was born in the 60s as a response to growing materialism and industrialisation. The overall philosophy of it is to be admired and influences us but perhaps the wording is unfortunate and appropriately modern. For there really is no such thing as self-sufficiency. I love reducing our dependence on the destructive, unsustainable industrial system but the reality is we’re all entirely dependent on each other, both directly and indirectly and this is rarely as obvious as with running a small farm. We may produce fruit, vegetables, eggs, beef, pork and dairy, but without the countless work of in-numerous individuals we wouldn’t be able to, and that’s with us running a ‘low-input’ system. We use electric fencing made in China, apply tons of compost delivered from Milton Keynes, need nails and screws and tools again from China, purchase animal minerals and chicken feed from our local farm shop relying on their staff and distribution networks, feed for the pigs and chickens has to be grown by organic arable farmers in other parts of the the UK, we have wheat straw delivered from the Cotswolds, and so on. And that’s just a fraction of it. I’ve found it fascinating chatting to lorry drivers recently about how everything is shipped around the country on these gigantic ‘artic’ lorries, that use something like 10 mpg. It’s an incredible network that exposes any delusion that we can indeed be self-sufficient, much as we might try, and much as it might be a noble aim within its context and proper understanding. It also exposes just how fragile and unsustainable our society is, dependent on a fuel source that is less than a decade or two away from serious supply issues. We take oil so much for granted that we assume its omnipresence as much as hydrogen and oxygen. Like the Mayan who worshipped corn, to their demise, we too worship oil… I’ll let you finish the sentence. 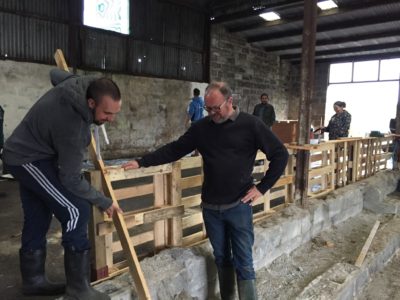 Scott and Simon putting the finishing touches to the fence

Back to the more practical matters of running a small farm, but still keeping to the community theme of this post, we have had lots of help from family this month. The main thrust of that support has been in helping us convert an outbuilding into a small shop and bottling room. That’s meant painting, decorating, plastering, laying flooring, sourcing worktops, tables and fridges and co-ordinating plumbing. It’s taking some solid work but it’s now almost completed, and we had the local Environmental Health Officer out to give us some advice before coming back to give us our Food Hygiene Rating next month.

But also we had another working weekend where 14 members of Sam’s family descended on us for a hard day’s work in glorious sunshine. Along with doing more of the bottling room, we mucked out the cow shed with a combination of back work, diesel power, and camaraderie, shifted 1.5 tons of compost and created some new vegetable beds, whilst doing everything else we need to do each day like feed chickens and pigs, move cows, and of course feed ourselves. It’s a reminder that bonds are forged through working alongside each other and by having a sense of shared purpose. They’re something that have to be developed and strengthened, lest they weaken. Humans communicate best shoulder to shoulder. It brings out the best in us. 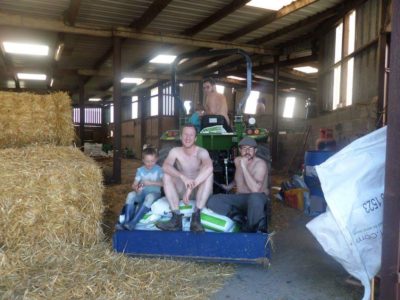 Sam’s brothers and nephews. By the way, I have shorts on…

The other big main thing for us this month is that we went from 8 chickens, to 89, and started supplying eggs to our local Food Assembly, which just started in Carmarthen. The first one was successful for all and hopefully it continues to grow. It took a lot of work because we weren’t planning to keep more than 30 or so hens, but when this opportunity came along we couldn’t say no. So we’ve had to sort out all the admin stuff like a bank account, accountant, VAT registration, business registration, food business registration along with meeting the Egg Marketing Inspector, getting our free range egg stamp, sorting packaging and labelling, and the small matter of sourcing and housing 80 chickens. We hope to grow this side of the business to become a major enterprise for us, aiming to have a few hundred hens by the end of the Summer if all goes well. The first market we attended was exciting as we got to chat to other vendors and meet our first proper customers (i.e. customers who aren’t already friends and family!). 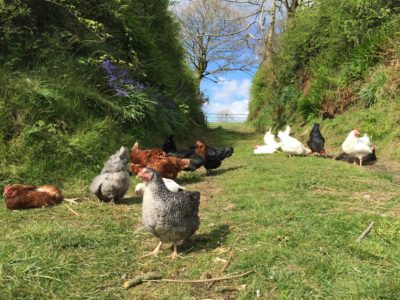 We’ve also been busy prepping the polytunnel, applying a ton of compost (literally!), along with weeding and pulling up the end of last year’s plants. So far we’ve just planted potatoes, but shortly we’ll be filling the beds chock-a-block once again with cucumbers, tomatoes, courgette, salads, herbs, and more.

At the end of March we turned out the beef and dairy cows onto pasture once again which means re-commencing our strategy of mob-grazing. Mob grazing means using electric fencing to provide daily paddocks for the cows to graze, which allows them to essentially only get one bit of the grass before moving on, giving the grass and thus the soil the best chance to regenerate. Essentially, we aim to grow the grass very long before being grazed once, and moved on, giving it at least a month’s rest before being grazed again. From our trips to other farms we’ve seen how quickly this improves pasture without any need for artificial inputs like fertiliser and foliar sprays of minerals. Theoretically it should lead to better soil life, higher soil organic matter (carbon), deeper root systems, more aeration, better water retention (less flooding downstream and better drought-resistance), healthier animals (more access to available minerals through the soil and grass), healthier humans (the meat and milk will have higher nutrient levels, and finally a healthier, more robust ecosystem. Sounds good to be true doesn’t it? We’ll find out, but from what we’ve seen from other farms the results are good.

Finishing on a family note, we had around 25 friends and family come down to us on the Bank Holiday weekend to help us clean, decorate and refurb our barn ready for the wedding in July. It was a fun weekend and it was nice to introduce different friends and family who hadn’t met each other yet and hopefully they’ll feel more confident to now say hello to each other at the wedding. It takes an entire village to run a farm— we hadn’t realised that before, but we’re beginning to now, and we’re about to find out it takes an entire village to raise a family. It’s early days yet but Sam is 11 weeks pregnant. 2017 promises to be quite a year for us!