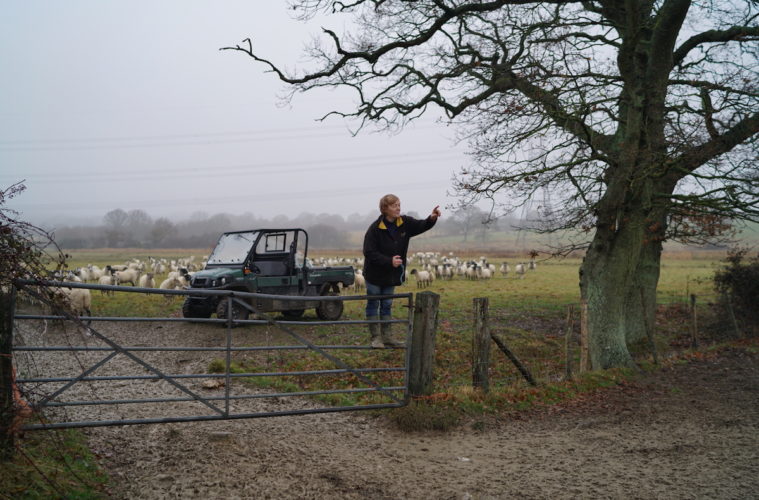 Our dietary guidelines are a nonsense

It’s time to put the old year behind us, learn from our mistakes and revel in our successes says Monica Akehurst

Whatever happened, it’s in the past. The new year is all about remembering the experiences and moving on. I enjoy opening up the crisp pages of a new diary waiting to be filled with this year’s adventures. Firstly entering dates for calving, lambing and family birthdays.

Great news and a very important date: this year our farm is to be the venue for legal beagle daughter’s wedding celebrations. A new role for the farm to play and it might need a little spit and polish. There’s much work to be done upgrading it, hopefully resulting in a smarter than usual working farm. It will be an opportunity to showcase to the urban folks the realities of food production. 2017 is going to be a busy one.

I’ll need to be more efficient than I was on the 13th, not a Friday, but it sure felt like one. Before filling in my sheep inventory form I resolved to recount our sheep. “The Boy” thought it would be a good photographic opportunity. We took the mule loaded with bags of home grown oats which we fed to the fattening lambs and cull ewes on the way. Arriving with our breeding flock, the rams crowded around demanding their sugar beet energy boost and the ewes eagerly awaited a sneaky opportunity to grab a mouthful.

We then began to count them through the gateway. We only got to 77 before and a voice chirped up. “Where are those sheep coming from?” We now had fat lamb, breeding and cull ewes, all mixed together. It was drizzling and there were a couple of inches of mud on top of chalk in the gateway.

Stupidly, we optimistically thought we’d be clever enough to split them out. Consequently as I turned to divert a cull ewe, I nose dived face first into the mud. Blood cascaded from my mouth and nose, I was totally plastered with a cold mud face pack which is bound to have enhanced my complexion. Home to change, collect the sheep handling equipment and back to restore order. If only we had shut that gate!

“The Boy” went walk about in Gloucestershire attending a two day workshop entitled “The role of livestock in future farming systems: from theory to practice.” It was organised by the Sustainable Food Trust and he thoroughly enjoyed participating especially as he got to interview Joel Salatin. He’s an American who practices regenerative farming. He’s also a prolific author and entertaining speaker who champions family farms and local food systems. He promotes mob grazing and pasture fed livestock. Prince Charles attended the presentation by Joel Salatin explaining his farming methods.

“Create a farm that your children want.” “The Boy” was cock a hoop when he heard this! Joel talked about tension and parents’ curmudgeoness curtailing the next generation’s creativity and inventiveness. Hmm….treading on sticky ground. He also advocated allowing the next generation a small separate area for start up embryonic enterprises, while advising that incomes should be kept separate so that the different businesses could sink or swim on their own merits.

“Create a farm that your children want.”

Joel explained that he’d sat down with his wife and two children and created job descriptions so that they didn’t step on each others toes – he claimed it was liberating to create these spheres of authority, autonomy and influence. At the conclusion there was talk of establishing a comprehensive dataset of the soil carbon outcomes from different farming systems that could be used to influence future policy.

On the internet there’s also a call for “food climate” labelling and a lively debate. New Scientist has posted a video saying: “Stop buying organic food if you care about the planet.” Claiming that lower yields on organic farms results in more land being used, resulting in higher greenhouse gas emissions, and more rain forests destroyed. It suggests genetic modification technology is the answer to cutting emissions and better for the planet. Not surprisingly the Soil Association has robustly refuted this, saying that Michael le Page has misread the evidence showing organic is a better choice.

Conflicting advice is confusing for customers and farmers alike. However I do like what Dr Zoe Harcombe, a nutritionalist and obesity expert, has to say. Eat real food – dairy products, eggs, red meat, nuts, seeds, fruit and vegetables and avoid pasta and grains. She found no evidence against red meat (excluding processed meat) and revealed some interesting health facts. Sirloin steak before you cook it is 71% water, 21% protein, 1% ash and minerals, 7% cent fat of which only 2% is saturated fat. One hundred grams of oily fish has twice the total fat, and one and a half the total saturated fat of 100gms of sirloin steak. One tablespoon of olive oil contains more saturated fat than a 100gm pork chop. Zoe says our dietary guidelines are a nonsense. Perhaps they should be revisited?

One tablespoon of olive oil contains more saturated fat than a 100gm pork chop. Zoe says our dietary guidelines are a nonsense. Perhaps they should be revisited?

Our diet impacts on our future and health. I just want to mention our eldest daughter who works in the NHS. She recently gave time to a charity, joining a cardiac team flying out to Ethiopia to give specialist care to patients. It was a private hospital and conditions were better than expected.

However a local doctor offered to show her around the public hospital right next door. The place was crammed to the rafters with patients, being treated on the floor, under beds as well as on top. It was a real eye opener. Let’s all be grateful for our NHS, especially in emergency situations.

PS: My chicken are not happy with having their freedom restricted.