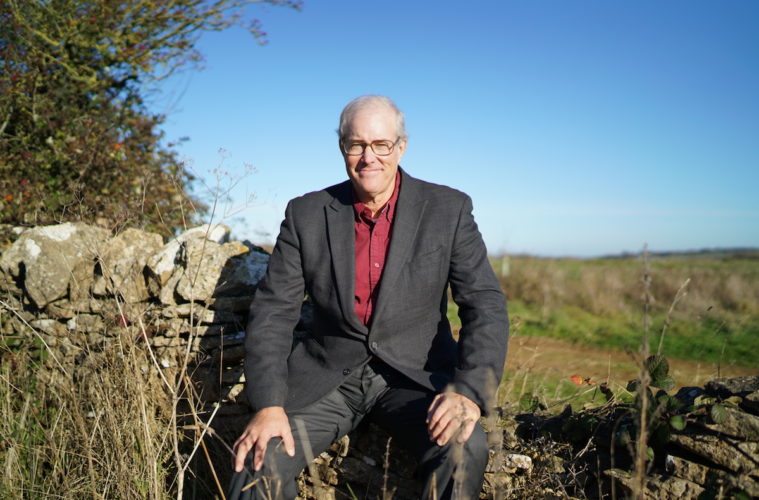 We were fortunate enough to interview American Farmer, Lecturer and Author Joel Salatin during his recent flying visit to the UK. He was the keynote speaker at a 2-day workshop we attended titled ‘The Role of Livestock in Future Farming Systems: From Theory to Practice’ run by The Sustainable Food Trust and hosted by Sir Alan and Lady Parker on their farm in Gloucestershire.

A self-described “Christian-libertarian-environmentlaist-capitalist-lunatic-farmer”, Joel Salatin produces high-quality “beyond organic” meats, which are raised using environmentally responsible, ecologically beneficial, sustainable agriculture on his family’s Polyface Farm in Virginia. TIME magazine dubbed him the world’s most innovative farmer. His holistic grazing and mixed stocking systems are featured in Michael Pollan’s seminal book “The Omnivore’s Dilemma” and the smash hit documentary Food, Inc – both of which helped propel him to international fame and inspire family farmers the world over to adopt his methods.

He’s also a prolific author and has written many books including a series of how-to guides such as “Family Friendly Farming”, “Holy Cows and Hog Heaven: The Food Buyer’s Guide to Farm Friendly Food” and “The Marvellous Pigness of Pigs”. And it’s not only farmers that love him – he is one of the biggest voices in the sustainable-food movement and claims that we could sequester all the carbon that has been emitted since the Industrial Age if if every farmer in the U.S practice his regenerative farming systems.

We got to learn more about these methods during the 2-day workshop (which you can read more about in our in depth report here). He was also kind enough to spare 15 minutes with us to pose on a cotswold stone wall (for a photo) and chat family farming, tech and more..

We love your vision of creating a farm that your children want – do you have any practical advice on how to overcome the age old parent-child tension?

Joel Salatin: This parent-child tension is everywhere – the parents who own the farm or have developed the farm feel threatened by the children’s creativity or seemingly lack of gravitas about how much work it is to acquire the farm, the tractor etc and of course the younger generation feel inhibited by the older generations orthodoxy. So there is tension. Two things I would say, one is there needs to be place for the younger generation to try something embryonically without threatening the mothership, so carve out a hectare or two hectares – that will be yours. What parent wouldn’t be interested to see what their child can do in the corner of that barn or the corner of that shed or the corner of that field. Well the child might say that’s not big enough – it has to be big enough. The younger generation has to be willing to try a very small embryo and the older generation seeing that it’s so small doesn’t see it as a threat to the mothership and is much more likely to let that happen.

The 2nd thing is to separate farm incomes, so both generation can enjoy functionally orientated compensation  – I call these fiefdoms – the parents can have their enterprise and the children can have their enterprise and they can sink or fail on their own merits. So they don’t jeoporardise each other, so that the childs failure doesn’t jeopardise the parents income and the parents curmudgeon-ess doesn’t curtail the next generations inventiveness. So separating that out so you’re not being all for one and one for all. Sharing in common sounds good on paper and it sounds so warm and fuzzy and communial, but in real sense it doesn’t work – because pretty soon one’s going to feel like they are carrying the heavier load, the others not and we are feel – so divide the income streams and create spheres of autonomy and responsibility – in our family we have four – my wife and I and our son and daughter basically 4 of us as equal people – we actually sat down and created job descriptions so we didn’t step on each others toes – it was very liberating to create these spheres of authority autonomy and influence for all of us.

We’re huge fans of your innovative low-tech farm tools and ‘bits of kit’ that we’ve seen featured in your videos about Polyface Farm – do you have a current personal favourite?

Joel Salatin: My favourite one is the millennium feather net – that’s this x trust skid structure with a thousand layers in it – that enabled us (that came way after the original egg mobile that follows the cows) it enabled us to scale up the egg enterprise with the security of the electric netting, boundary to keep predators out and keep the chickens in – it gave us an tremendous level of control and incredibly functional structure in that it was not expensivee it doesn’t blow around, you can’t have a flat tire – anyone can move it – it’s really been a great functional unit.

(Here is Joel offering his advice on the prototype egg-mobile at Fir Farm, Gloucestershire)

Looking to the future – what do you think might be your favourite bit of kit 10 years from now?

Joel Salatin: I think there are some cools pieces of infrastructure that would be neat – one would be some video surveillance – particularly for water troughs on rented land -10 miles away. Wouldn’t it be great to see real time video coverage – so I think cheap accessible video surveillance – we’ve played around with it a lot but right now we don’t have enough cheap ubiquitous cell phone service to make it happen. That’s something I’m looking forward to it and I think that it will come – so I can go down in the morning and as part of chores I can punch the computer monitors and bring up every water trough involved with the system -and say yep that ones working, that ones working – that would really help my day be stress free.

What are the main differences between organic and beyond organic?

Joel Salatin: The main difference is that organic does not (at least in the US) require pasturage and it doesn’t require a plant animal relationship – so your whole fertility program can be imported fish emulsion or even composted concentrated animal feeding operation manures  – so you don’t have to have an animal at all on an organic farm, and where you do have animals, they don’t have to be on pasture and get green material or exercise or sunshine and all that – they can be confined in a building and still be certified organic. To me those are the two biggest areas.

Any last comments for young and old farmers?

Joel Salatin: All I would say is that there’s not a single farm on the planet that is fully leveraging and capitalising on its air, soil and water. And I’m not saying capitalise on it to deplete it, I’m saying to capitalise it to use and actually increase air soil and water whilst you’re using it. I know a lot of time in farming we feel warn out, we feel out of ideas, we feel can’t coming on (like flu) – I’m here to encourage folks that there’s a lot of can out there – we need to expose ourselves to new ideas, new people, new sets of eyes to full leverage the gifts we have.

Enjoyed this interview? Share It! (with our social media sharing tools below)

Check out our report on The Role of Livestock in Future Farming Systems: From theory to practice.