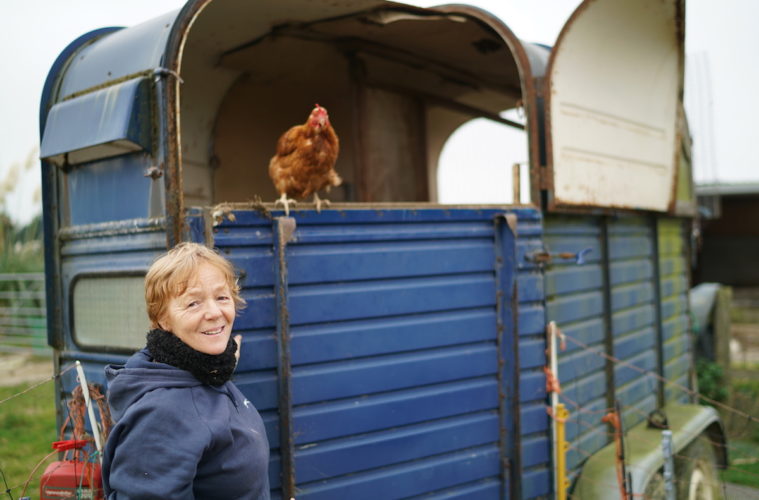 Farmers are used to dealing with unpredictability says Monica Akehurst..

Unpredictable times could bring positives. I’m exasperated by the Remoaners they should heed Albert Einstein’s wise words: ‘Out of clutter, find simplicity. From discord, find harmony. In the middle of difficulty lies opportunity.’ There’s plenty of clutter on our farm, which sometimes proves useful. I like a simple life. The menfolk and dogs between them provide discord and harmony.  I’m convinced opportunity is here somewhere, if only I could find it.

It won’t be easy but our politicians do need to knuckle down and create a tailor-made system for the UK. The result will I hope be more functional than the present model. Catering for 27 diverse European countries in a ‘one size fits all’ situation isn’t working.

A weak pound is helping our export trade. It’s increasing our competitiveness and encouraging tourism. Imports will be more expensive but perhaps that’ll make people look closer to home for products, resulting in new industry starting up within the UK. Let’s take pride in the quality products that we produce here and start believing in our capabilities to make Brexit work.

Tesco has presented itself as the shoppers hero by making public its row with Unilever over the pricing of Marmite. Details of their agreement haven’t been revealed. I wonder who took the hit! Low prices at whose expense? Supermarkets are renowned for flexing their muscles with suppliers. The introduction of the National Living Wage combined with sterling’s depreciation, means inflation and higher costs are on the horizon for everyone. There’s no room for greed within the food chain, everyone requires a margin for survival. Consumers need to be able to afford food and retailers should understand that producers can’t sustain supplying goods below the cost of production.

It’s crazy that primary producers and farmers are not covered by the Grocery Code of Conduct. This code applies to the ten largest UK supermarkets. It helps prevent practices that negatively impact on direct supermarket suppliers. The GCC adjudicators’ role is currently under statuary review. Evidence is being gathered to support the need to extend the adjudicators remit down the food chain giving better protection for indirect suppliers to supermarkets. I hope it’s successful in securing fairer deals for suppliers of all sizes when trading with the most powerful supermarkets.

Farmers are used to dealing with unpredictability. You might wake up in the morning thinking that you’ve organised your day, but that doesn’t mean it will go according to plan. The weather, animal moods and machinery breakdowns, can put a spanner in the works! Farmers need to be adaptable and reactive to problems as they arise. I like this aspect of our job, rising to the challenges and figuring out ways around it can be fun. It’s much more satisfying completing a task if you’ve had a few hiccups along the way.

Maybe that’s why I enjoyed working in the Emergency Unit, never knowing what I’d be dealing with next. I remember a night when an ambulance crew, accompanied by five burly policemen, brought in a hand-cuffed youth who was high on drugs. This client proved to be a difficult patient, alternating between extreme violence and a semiconscious state from which he occasionally reared up. When he settled, the police searched and un-cuffed him before withdrawing.  A young female doctor and myself went over, pulled around the screens and began to attend to him. The doctor asked me to roll him onto his other side and as I did so, I saw a glint of steel. I reached down and withdrew a nine inch bladed knife tucked down his sock. The doctor was horrified and the police incredulous as I silently handed the knife over to them.

Farming has its own drama’s like the day we extracted a bullock from the river, towing it out using our pickup truck. Before we could remove the ropes the animal lost the plot and went for us. We hopped into the back of the truck with the crazed animal running round battering the vehicle to which it was attached. Far from being grateful to us for saving its life, revenge was its reaction to the trauma. It was a case of living dangerously, eventually the animal calmed down and the ropes were removed. The insurance assessor declared our truck a right-off. But it continues to pass its MOT and it’s got oodles of character. It may not be the smartest looking vehicle but it did save our lives, so we’re still using it!

The woodland is putting on a beautiful display of Autumn colours. Bizarrely in our garden we’ve got pretty rose buds forming and some of my raspberry bushes are laden with berries. On the farm grass seeds and stubble turnips are coming back. I’m catching rare glimpses of my other half whose tractors are seeing rather more of him than I am. While he was calibrating his drill I reminded him of the saying; one for the rook, one for the crow, one to die and one to grow. He assured me that he’d taken all that into account. The winter corn sewing is completed now and hedge cutting is high on his agenda. ‘The Boy’ has done well ferrying bales home. Knowledge exchange between us and the younger generation is a work in progress.

My hens the Henrietta’s are predictable. Eleven dutifully lay eggs before nine o’clock but number twelve has a more relaxed approach to life, never laying until the afternoon. Nights, they perch in an old horse trailer. Mornings, when you let them out, one always insists on perching on top of the ramp and when it’s lowered she launches herself into the air. I think she’d enjoy a trip to Alton Towers.