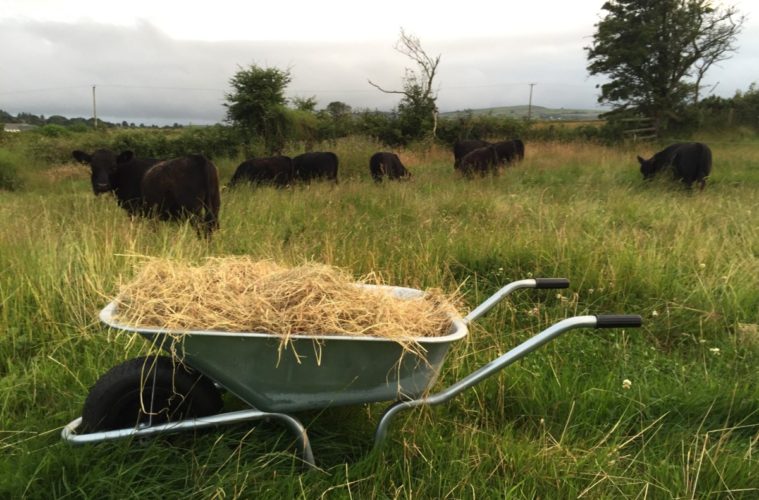 Looking back now the first couple of weeks were a bit of a mad scramble. We jumped straight into the deep end, with having 9 cattle, 2 rescue dogs and 4 rescue hens from the beginning.

Plus Sam works 2-3 days a week in Swansea, plus we had unpacking to do. We also planted up the polytunnel and turned over a patch of weeds to plant up. It was full on, but that was to be expected because we’ve been itching to start for a long time now. So the last week or so has seen a slightly slower pace, which has been very welcome, and has allowed us to settle in more. We’re still working from pretty much dawn til dusk, but it all feels a bit calmer. I realised that I was putting pressure on myself, saying this and that had to be done but thankfully I’ve now realised that adding extra pressure isn’t needed, and it will all get done when it gets done. We have a clear plan, or at least we’re putting one together, and we have a schedule, so we just have to follow that, and trust it will all come together if we put the work in.

The biggest demand of our time and energy so far has been the dogs. They’ve both lived troubled lives for too much of their young lives, and thus have brought with them a little bit of ‘baggage’ that we’ve had to work through. At times that has been quite a challenge, and we’ve had more than a few nervous evenings wondering if they’d ever get there! We spent a lot of time in the first couple of weeks reading books about positive dog training that were recommended to us by the rescue sanctuary they came from and while it’s been a steep learning curve finally the signs of them ‘getting there’ (wherever ‘there’ is!) are there. They’re calmer and more obedient, Rocky has stopped snapping at Mai about food and attention, they can go off the lead in an enclosed field (unfortunately Rocky is still spooked by the cattle so I wouldn’t trust him with them yet), Rocky has stopped terrorising the chickens, they are both sleeping through the night better without barking, and all around seem happier and healthier, which has freed up some of our time and energy to spend on the other aspects of the farm – as much as the dogs think it’s all about them!

We moved the cattle for the first time to a new field, to start mob grazing them. First we had to set up our electric fencing which was fun. (I can highly recommend KiwiKit – and no that’s not an affiliate link!) Before all this we put together our grazing plan for the rest of the year.

Within the Holistic Management framework you are encouraged to plan ahead and decide when you will move your cattle. It’s a simple chart where you mark out how long your cattle will stay in each paddock. We’ve done a very simple one but you can add more complexity if needed, though seeing as we’ve only got 9 small cattle on 13.5 acres of grazing, we didn’t feel the need to be too precise and scientific about it.

In order to calculate your plan you need to know how many and how heavy your cattle are (approx. not forgetting that over time they will grow if they’re not yet fully matured), the area of your paddocks, and the length of your grass (again factoring in growth rates over time). From that you can make an approximation of how long your cattle (or sheep) will spend in each field before needing to be moved. Why do this? Many reasons, but briefly it means not getting to a point in the season where you ‘run out of grass,’ maximising your return (I.e. Realising you have ‘too much’ grass and thus need more ruminants or can take hay), simplifies future decisions, and if done correctly should allow you to optimise your soil, grass and animal health. For more info about Holistic Planned Grazing, this 3 min video is well worth a watch. 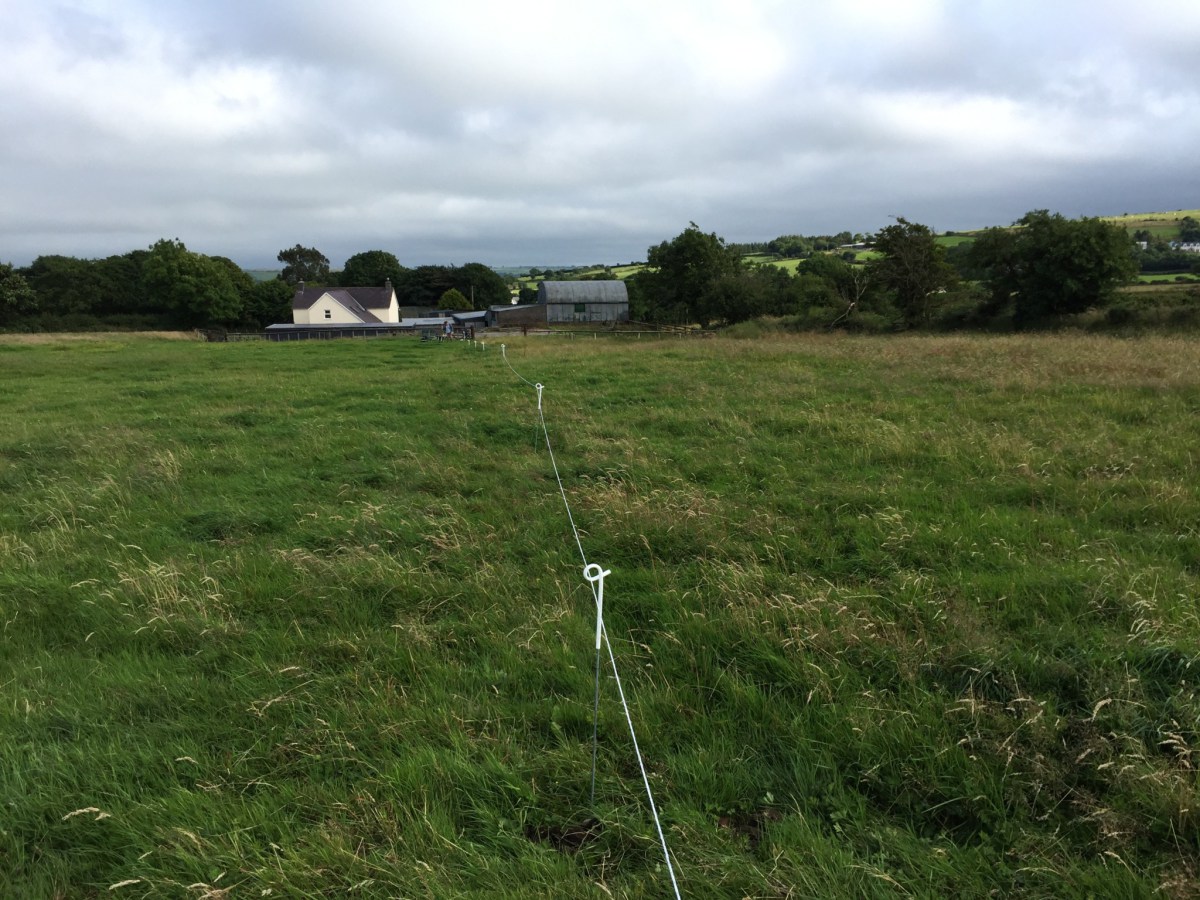 After deciding that, we then had to decide how big to make each cell (one day of grazing). Experience of our land and our animals will guide this over time, but for now we calculated a rough area (we found out two days later we needed to double this! Which means going back to our grazing plan to re-jig it), and set up electric fencing ready. The cattle are given a run back space allowing them to trample in more plant material into the earth (feeding the soil) whilst providing them more space to run free in, because on our small scale their cells would be too small not to give them the additional space.

Moving the cattle for the first time was an experience to say the least! Our first ploy was to try walking behind them to herd them in the direction we wanted. That didn’t work, in fact we drove them all further away and for a moment we thought they were going to escape into next door’s field as they had without us knowing, over the last week trampled down a small part of the slightly rotten fence on our side. Thankfully next door’s fence was in good order! The sun was setting by this point, and there were heavy clouds rolling in off the Celtic Sea, and we hadn’t eaten our dinner (something I’m learning on a farm is that the animals eat first, and the farmer eats last!). So we had our dinner outside sitting on a wall overlooking the cattle 150 yards away. 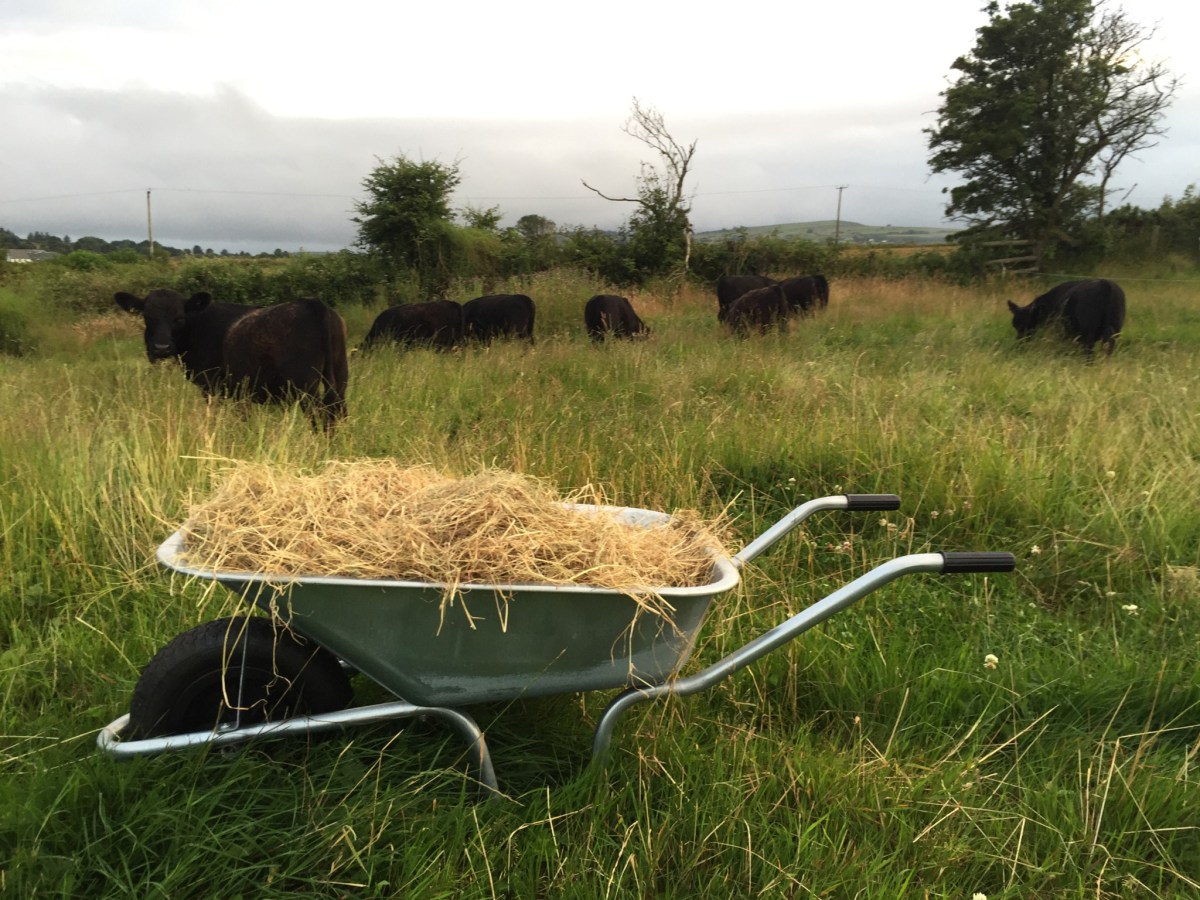 They didn’t even try it!

How were we going to herd them? As they’ve been grass-fed their entire life, they’re not used to coming to a bucket, and we had nothing to feed them anyway. The only thing we had was some hay. It was worth a try we thought, though I was doubtful it would tempt them over as they were surrounded by plenty of fresh grass! We filled a wheelbarrow full of hay and walked over to them. They came over, give us a lick as usual, sniffed at the hay, and turned around. My heart sank, how were we going to move them now?! I said to Sam, who had the wheelbarrow, “turn around, and pretend you’re not interested,” following the advice of the old time farmer we bought the place off. She did that, and gradually they all crept towards her. Nervously, we both started walking away from them, careful not to make a sound with Sam wheeling the hay gently forward just in front of their inquisitive (or is that greedy?), outstretched tongues! We did this carefully for the 150 yards until we reached the gate of the other field, and with relief shut it behind us! The funny thing was when they got to the new field  with the new electric fencing set up, which was not without a few anxious moments along the way, they went straight for the fresh grass and forgot about the hay! We left it for them but they weren’t interested in it at all!

Pleased with our day’s work of creating a grazing plan, setting up the electric fencing and moving the cattle, we enjoyed a beer, some locally made ice-cream and a few strawberries from the garden watching the rest of the clouds roll in silhouetted against the setting sun. Then we ran quickly across to the chooks to make sure they were locked up safe for the night!