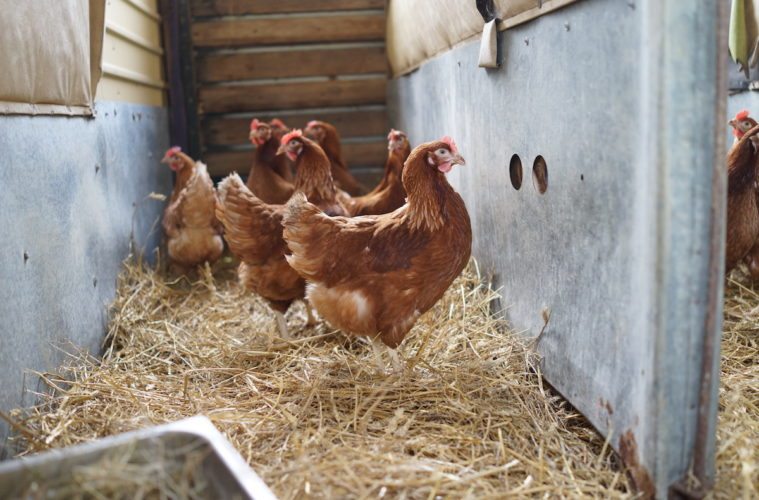 In this month’s farming opinion column Monica Akehurst is horrified and saddened by Tesco’s fictional farms, and updates us on life on a real farm – with the arrival of new born twin calves and a dozen new point of lay hens (and a cautionary tale)

The London’ites were heading home for Easter so our cupboards needed restocking. We’ve got homegrown meat available but I knew ‘the gang’ would be expecting alcohol and chocolate to accompany it! Against my better judgement and under time constraints my youngest guided me through Tesco’s doors. Immediately we were swooped upon by a smart uniformed young lady wielding a plate of raspberries and blueberries enticing us to try them. They looked good but the flavour was not a patch on those that I grow in my own garden. Personally I prefer to eat food when it is in season because quite simply it tastes better and I don’t hold with the supermarkets obsession of all year round availability,  it detracts from the true appreciation of food.

It’s good that some farmers have enough ‘fire in their belly’ to try to raise the profile of the Agricultural industry.

I was both horrified and saddened by the sales pitch that followed. ‘Take a look at our seven new brands that we’re launching. They have distinctive farm names, some of them are fictional but these represent really good value for money. Please look out for them in our store.’  She pointed to a table of plastic wrapped items. I asked, ‘Are these products sourced from within the UK?’  She replied  ‘At peak production times they will be, but not always, as if it is cheaper elsewhere, we like to provide you with competitive prices –  which is what you the customer want.’

I was about to protest, giving this young girl a piece of my mind. But my daughter swiftly intervened guiding me away, so the sales girl had a lucky escape. It’s infuriating being told what I want, when it’s exactly what I don’t want. ‘She’s only doing her job,’ my daughter defended her. The urban population are so far removed from farming. I wanted to scoop that girl up and give her some real experiences in the production of food. People don’t realise the consequences of screwing down the producers prices and then they are shocked by the existence of factory farms. Worse still, I recently read that cultured meat is the solution for feeding the world. Cellular agriculturists are growing burgers and steak in laboratories: Whatever next!

The urban population are so far removed from farming. I wanted to scoop that girl up and give her some real experiences in the production of food. People don’t realise the consequences of screwing down the producers prices and then they are shocked by the existence of factory farms.

Unfortunately these days all industry has to fight for survival. ‘The Boy’ joined the FFA protest in London enjoying chanting ‘fair price for farmers’, whilst us Olden’s stayed home working, Someone has to. But it’s good that some farmers have enough ‘fire in their belly’ to try to raise the profile of the Agricultural industry.

As we’re about to be plunged into lambing I’m writing this whilst I can still string a sentence together. We’ve enough work to keep 20 people occupied, but we wouldn’t have a hope in hell of paying them. I did try to persuade my middle daughter to assist with setting up pens. She declined saying that the farm smelled. It doesn’t help the fact that these days manure is stored in a shed instead of in a dung maxen out in the field. I bet the air here is a lot fresher than the air she breathes in London, but some things are best left unsaid! Preparing for lambing can be fun. I’ve yet to crack the perfect system but I’m working on it. I gave my first lambing assistance of the season tonight, large triplets all of whom had died in-situ a few days ago. Not a pleasant job. Already I’ve mislaid one of my lambing ropes in the straw, but don’t worry I’ve still got my penknife so I can cut string!

Last night we had twins born, not lambs but calves. Good size and healthy but the Charolais cow is not as impressed as we are. She’s being uncooperative when they go to suckle and kicks like a mule, quicker than we or the calves can move in order to avoid being a target. Consequently when connecting the calves for their feed we are having to halter the mum plus rope one back leg, which, being as she is as cunning as a cart load of monkeys, requires much bravery and skill. First I did a risk assessment and the score was not good but needs must: Colostrum is vital.

I’m pleased to report that l’ve recently purchased some point of lay hens. You can’t beat having your own eggs. It’s inevitable that battle with foxes will recommence. I hate foxes’ destructive nature and fail to understand those that jump to their defence. Last year one fox avoided our trap but was caught on camera, attacking live lambs in the shed chewing off their ears.

Several years ago, mid afternoon on a hot day, I arrived home to discover a fox slaughtering my chicken amongst the shrubbery in front of our house. I shrieked rousing my eldest daughter who was around the back sunbathing along with the Labrador. The dog and fox had a bundle. The fox attempted escape but the dog gave chase. The fox, probably one rescued in town and released in our vicinity, ran into the house through the open door. I was so irate that it had killed my chicken that I called the dog off and slammed shut all the doors. The fox could be seen hiding under the kitchen table. But now I had a problem. My other half was not available and a twelve bore was not practical in this setting. So I phoned two friends and explained my dilemma. My heroes arrived with a hollow broom handle and a cord forming a noose which could be tightened at arms-length. Wearing garden gloves for protection we entered the kitchen to catch the culprit. It worked a treat. No fox kills my chicken and lives to tell the tale.