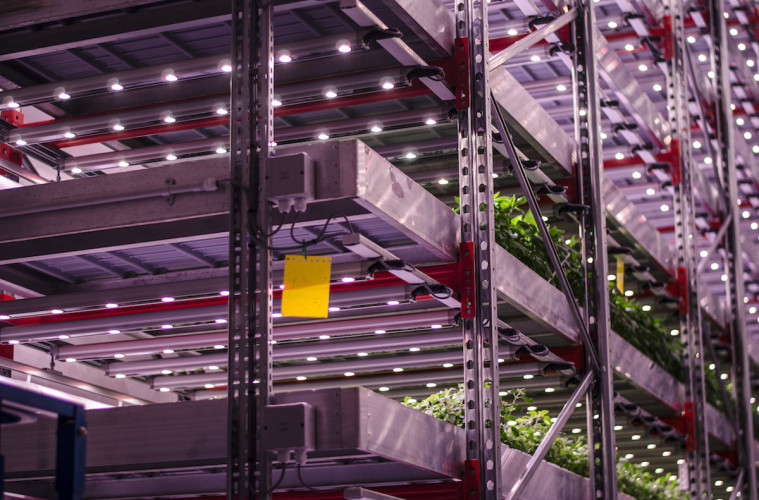 GrowUp Urban Farms Unit 84 is the first commercial aquaponics and vertical urban farm in UK and has been nominated for the BBC ‘s Future Food 2016 award. Regular Indie Farmer Reporter Aiste Saulyte recently visited their East London based warehouse to find out more..

Nothing screams future more than the LED-lit shelving units filled with microgreens, salads and herbs, grown in water that gets pumped through from the adjacent room with tanks of tilapia. The process is closely monitored by the white-coated aquaponics pioneers shuffling between the shelves – harvesting, checking for pests and diseases, measuring water acidity levels. Stood there you feel like you’re starring in 2016: the Food Odyssey. 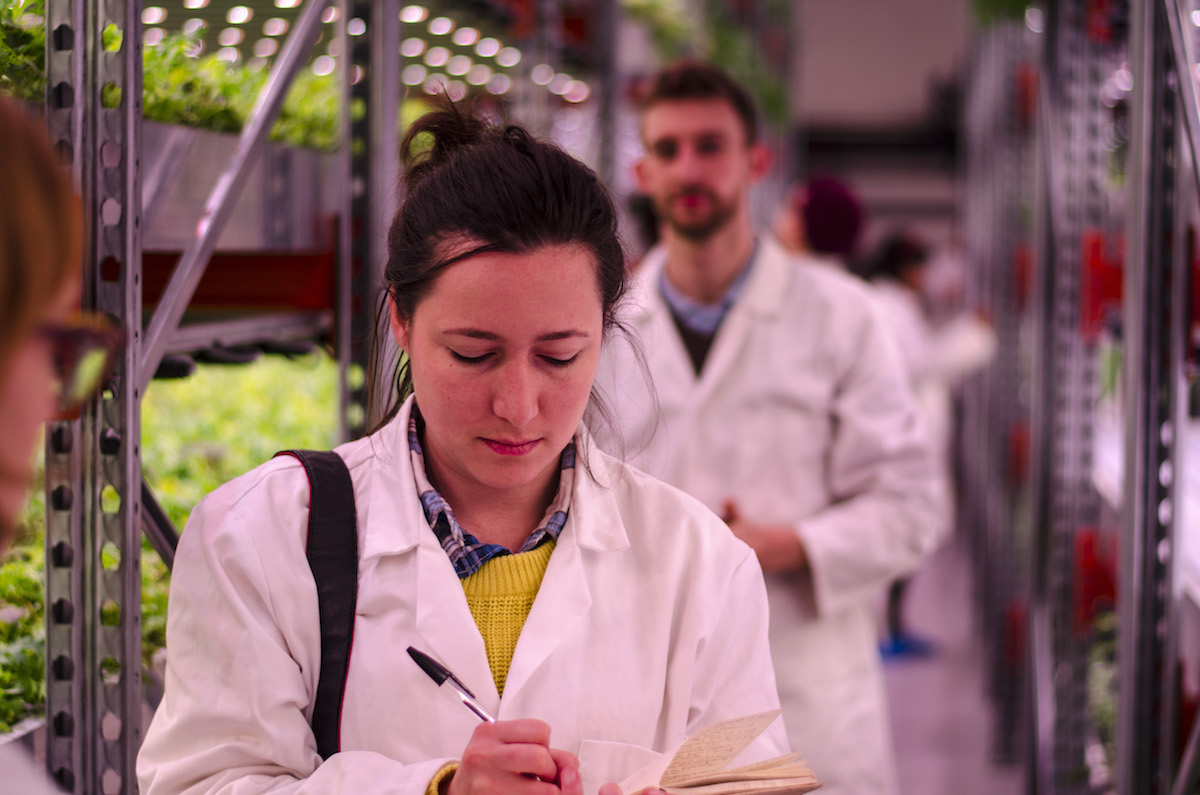 I first met these guys back in 2014 at the GrowUp Box in Roof East, Stratford – a shipping container with a basin of tilapia (swapped over with carp for the winter months) and a custom-built greenhouse on top with zip towers of basil, watercress, mustard and other green goodness. The zip towers are designed to maximise the use of space and exposure to light, whilst the greenhouse had an automated mechanism, lifting up the roof to allow air-flow when necessary. I remember having to get around by hopping over the hole in the floor that acted for the entrance to the greenhouse, where you clobbered up a ladder, and when the wind blew, which it did a lot as the Box is based on top of a multi-storey car park, it felt as if it will lift up and fly away. ‘This is really helping me face my fear of heights,’ I said to Oscar (the farm manager) who ran the Box when I came as a volunteer to learn about maintaining an aquaponics system in practice. I’ve been reading about and fascinated by aquaponics for awhile and it was great to see it up-close. The site was built as a means of engaging people with the idea of aquaponics and sustainable farming, as well as to test the market and sell the produce to local restaurants. The Box is still running and is open for the public to come down and visit. 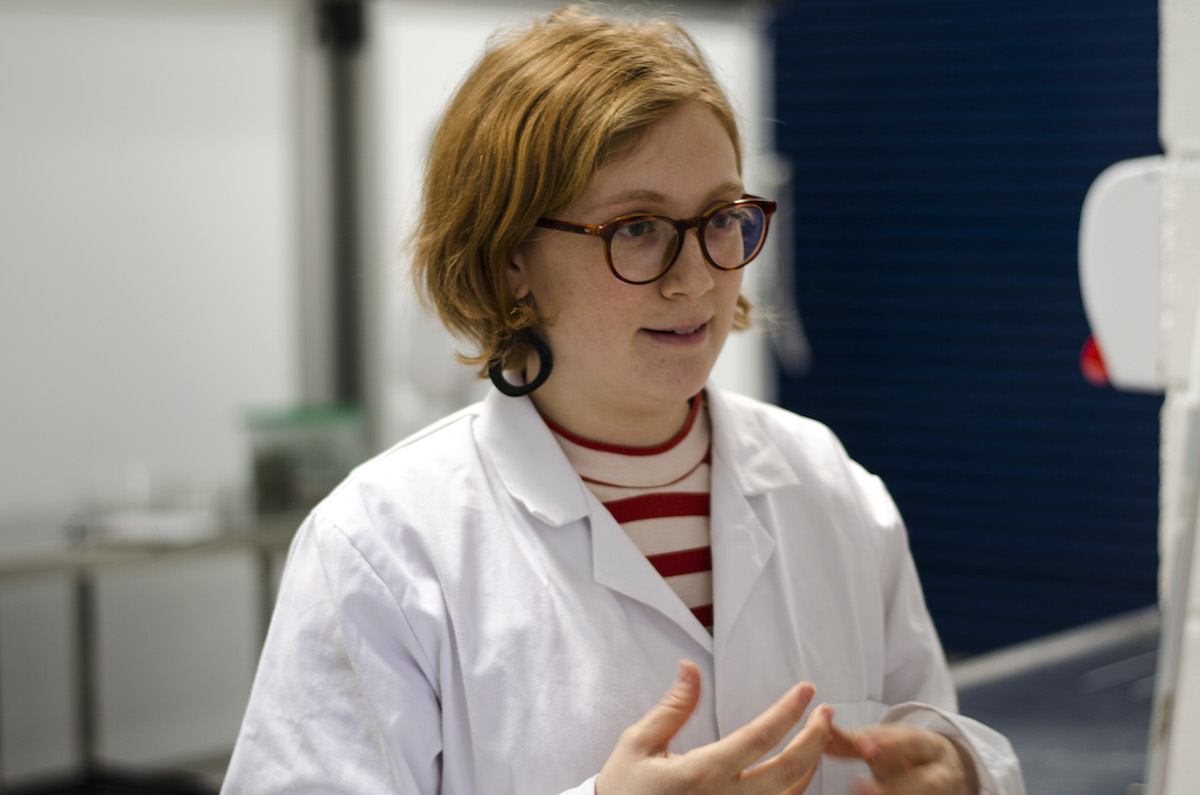 At the time, Tom (runs the farm) and Kate (runs the business) were busy back in the office and attending conferences, trying to promote the idea, build a business model and gain investment to build a bigger farm. The Box was built using funds from a very successful Kickstarter campaign, but they always knew the big dream was to build commercial scale. Even if farming the Box really intensively it would take about 8 years to get a return on the financial investment, therefore the Box mainly acted as a demonstration site. From the success of the Box they were able to build the business model and raise the finance to scale it up. So I came down to visit the new farm and see what GrowUp have been up to since I last saw them. And let me tell you – Unit 84 in Beckton is next level stuff. 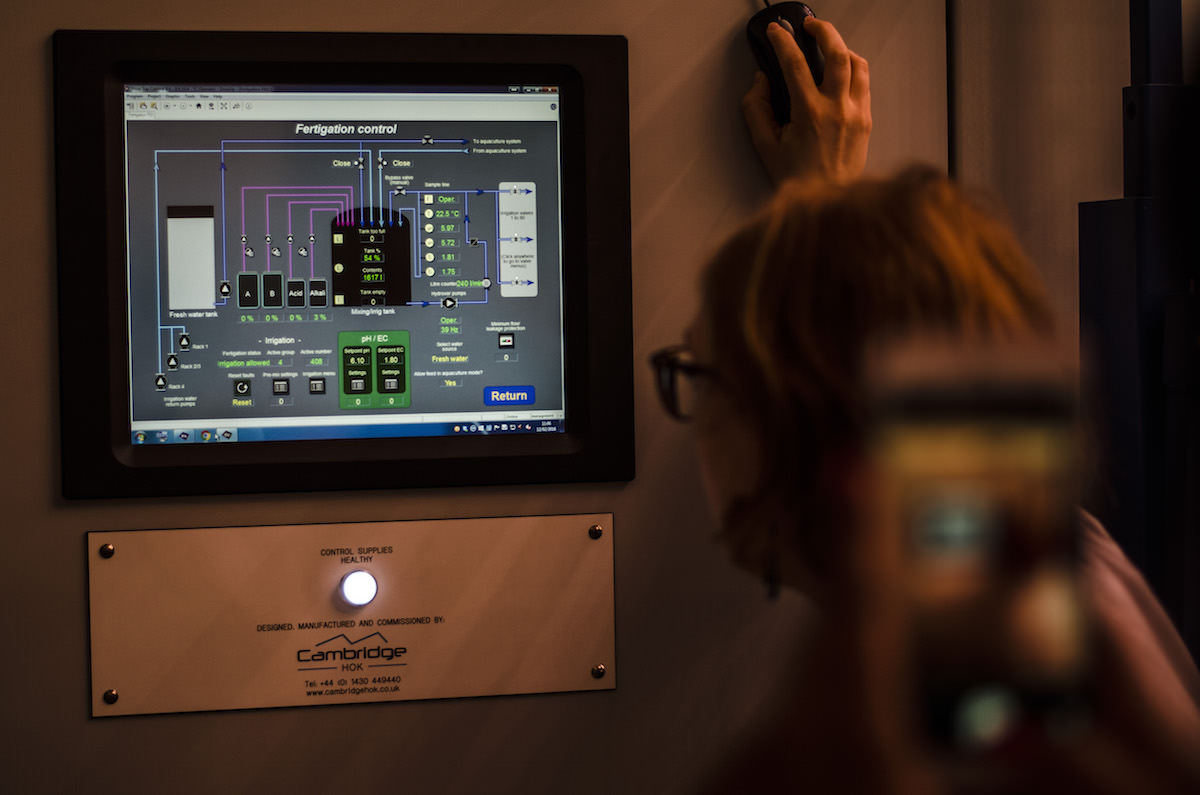 Since May 2015 they’ve moved into an industrial warehouse unit and have been fitting in the farm and gradually increasing their operations, bringing in delivery drivers and farm operators. The farm has two large spaces, one with fish tanks and the intricate water filtration system and system monitoring machines, and the other with large shelving units they have to reach using a zip lift, which Kate mentions she once got stuck on during a demonstration, causing a bit of embarrassment and some laughs. Unit 84 is not yet functioning in full capacity. ‘Not all the fish tanks have fish in, not all benches have plants growing in them yet, because from both an operational point of view that ramp up needs to happen slowly, but also, from a technical point of view, the way aquaponics system works – you need to let the filtration system develop a bit organically, so you can’t just load it with fish to start off with’ – explains Kate. Once it’s fully running, the farm aims to produce 20 tonnes of greens and 4 tonnes of fish each year. 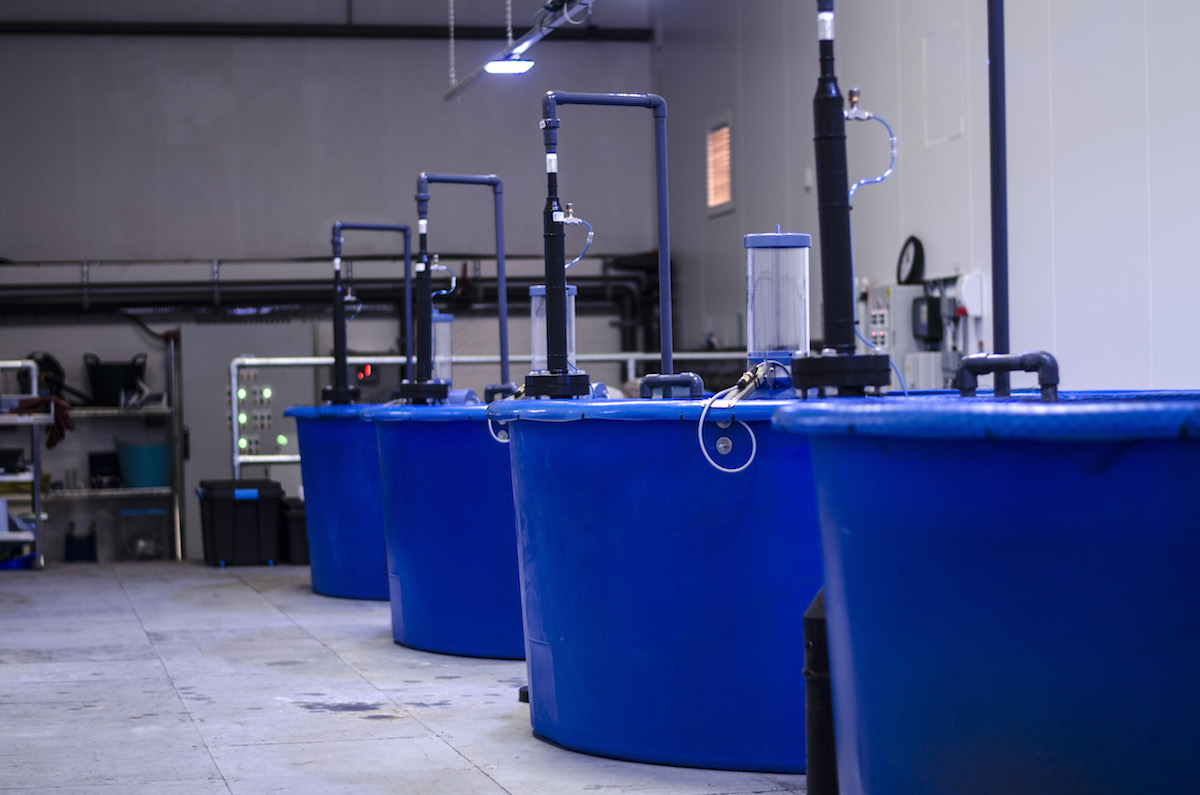 The GrowUp team have been working hard to make this a financially viable and environmentally sustainable business. And this is only the beginning. According to Kate this is the smallest they could build the farm to make it financially sustainable. The farm is 600 square meters in terms of footprint of the building, but they have 750 square meters of hydroponic beds. I ask Kate how big it can get? ‘Going forward the farm would be 6000 square meters – 10 times the size,’ – she says. That’s pretty big. Not only that, but it would yield 25% more produce per square meter than Unit 84 due to the lessons they’ve learnt about allocating the operational space. 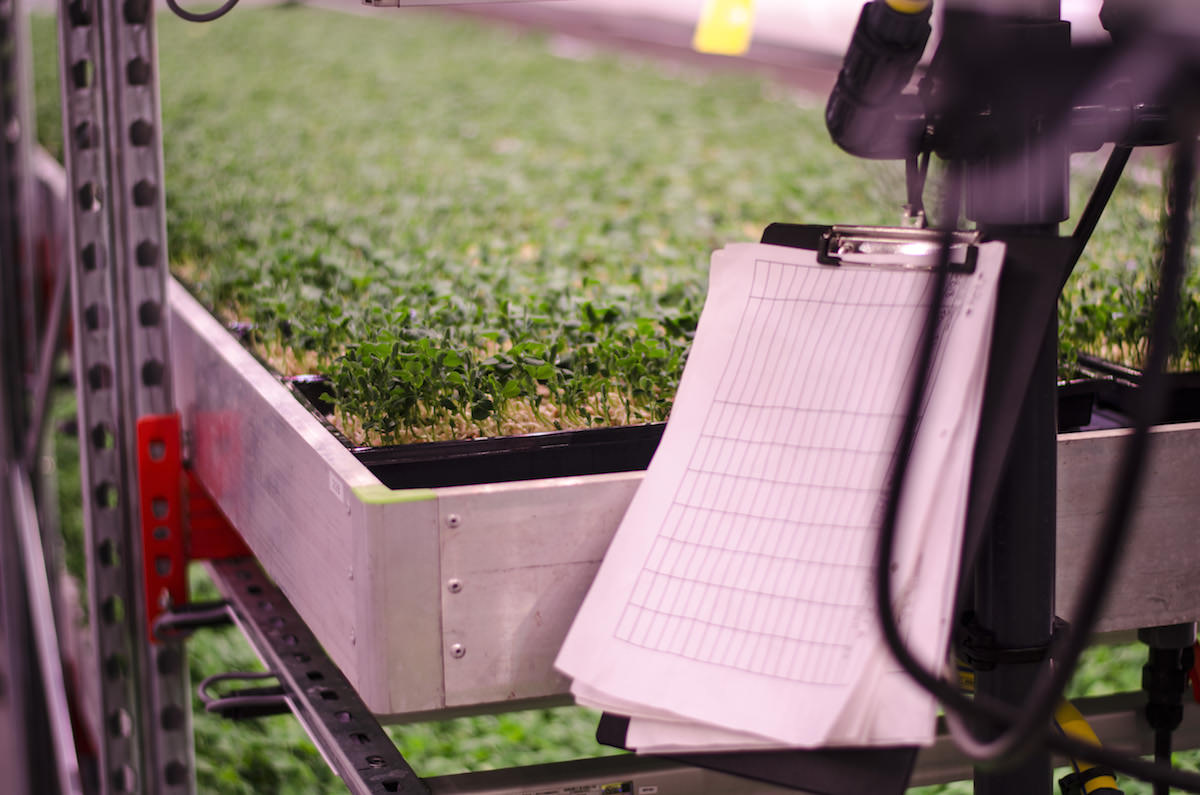 Compared to home aquaponics, the benefit of commercial scale is the size of the body of water. In GrowUp’s experience, ‘the smaller the system, the harder to control. Because the smaller the body of water, the less buffer you have. So if something changes in the conditions of the system, you have an exponentially bigger effect than if you had a bigger body of water,’ says Kate. There are plenty of people successfully using home aquaponics systems, but GrowUp is targeting the majority of urban dwellers who are not interested or do not have the time to grow their own food. The aim is to provide these people with good quality, nutritious, local and sustainably grown food and Kate sees aquaponics as a solution to food growing in conditions where traditional forms are much harder to pursue. 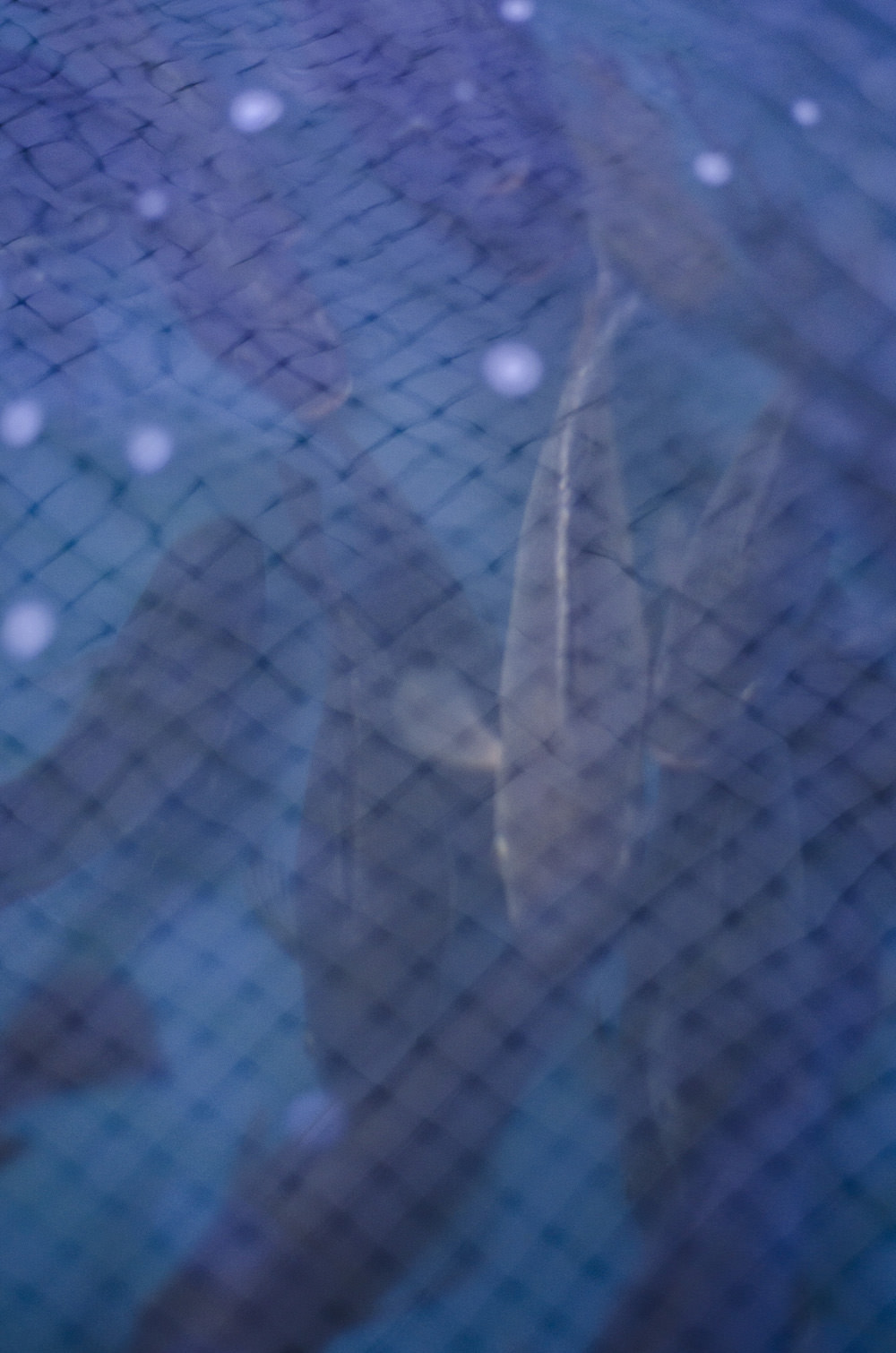 Whilst some people express an anxiety towards the new high-tech trend of food growing, GrowUp Urban Farms do not see their business as a direct competition to traditional British farmers, but a solution to problems of urban food and a possibility to grow crops that would otherwise be imported. Kate expressed that she feels they’re actually getting people more interested in where their food comes from, which benefits other local farmers too and noted that people who worry about the nutrition and taste of the food that isn’t grown directly in soil, don’t usually have any idea about where the food they purchase in supermarkets actually comes from as the types of crops they produce are ‘grown in greenhouses in Spain and Holland by farmers who are absolutely nailed down by supermarkets for their margin so what they have to do is focus on getting a crop that can travel easily and have long shelf live. They’re not growing it for taste, which is why sometimes hydroponic food doesn’t taste good. But there’s no reason it shouldn’t,’ says Kate, mentioning that one of their advisors is a pepper farmer in Hertfordshire who grows them hydroponically in greenhouses, and apparently they taste fantastic. 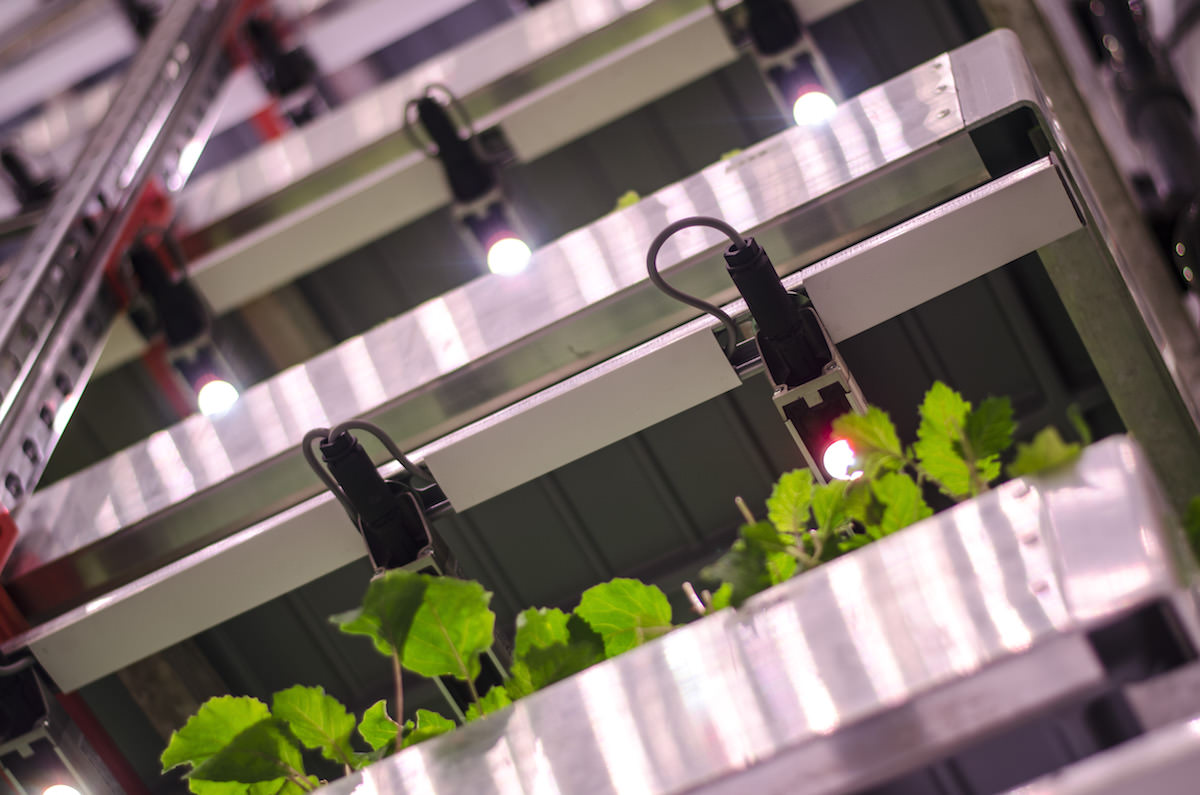 As GrowUp scales up they will also create more job opportunities. Currently they work with 12 people, and when I asked what her response to those who have reservations about technology replacing the need for people, she says – ‘it’s not the tech that’s taking away the jobs, but the cost of farming and the poor margins people get on their produce that makes people have to farm on their own where previously they may have had 6 people farming a piece of land. We’re not interested in full robot automation of land.’ Kate thinks that the benefit of technological advance is that it allows you to optimise what you invest and what she believes they do best best is ‘grow really delicious, high quality, sustainably produced food and in order to do that you’ve got to have people involved.’ Kate is sure that the bigger the farms they build, the more operationally effective they can be, but that doesn’t mean reducing their social impact around employment, instead it will enable them to increase it. 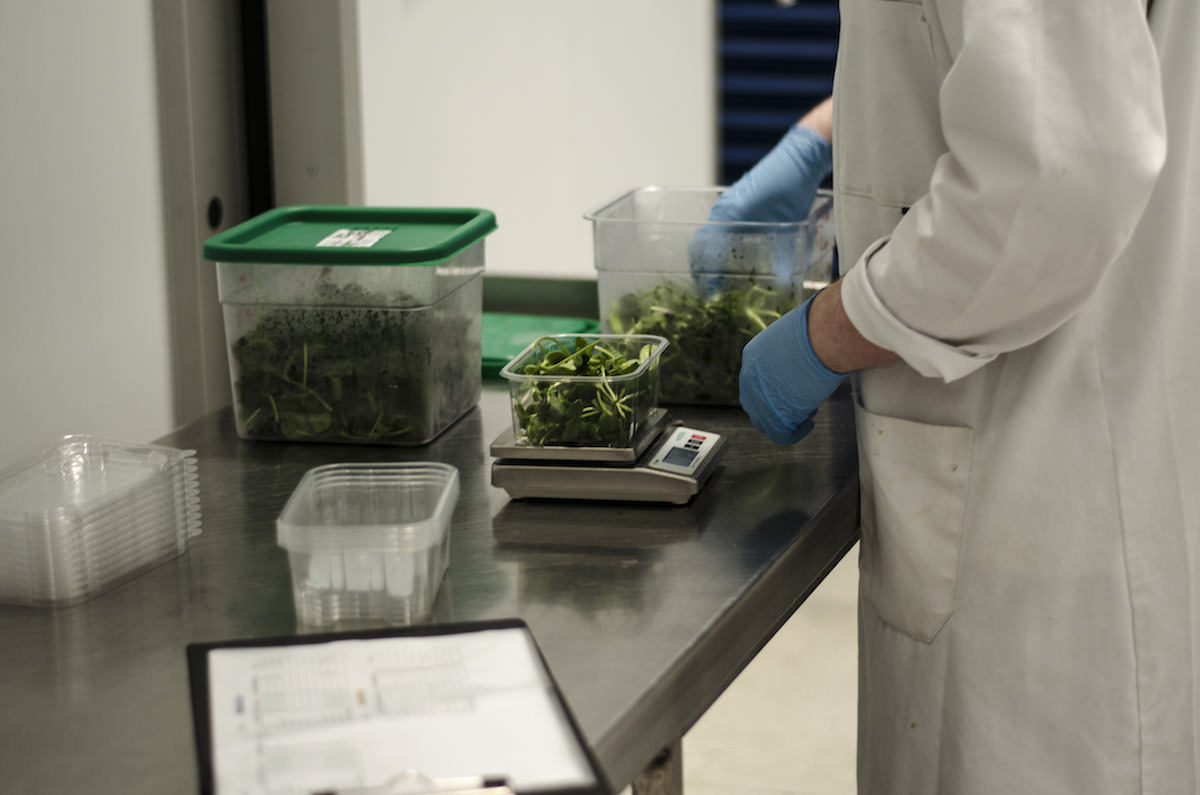 Before they set up the business Kate had no agricultural background and held a degree in English and Education. After working as a management consultant for IBM, she took time off to do a masters in Environmental Technology and Business. It was then when she got really interested in aquaponics and sustainable farming and left the job to set the business up after meeting Tom who is a Biologist with a masters in Sustainable Urban Development and was highly disinterested in continuing to work for big development companies to help them make excuses about not meeting their sustainability targets. They were interested in how they could make a difference in regards to the environment and sustainability and it wasn’t an interest to become entrepreneurs that led them to create the company. If someone else had the business, Kate would have happily gone to work for them. She says they set it up out of necessity and it’s neither easy nor glamorous.

Although Kate herself runs the business side of things, it’s a small company and the real day to day can include cleaning the toilets, washing the floors or harvesting, if the help is needed or someone else is off sick. The farm has a tight schedule of seeding, harvesting, water management, packaging, feeding, fish husbandry and health checks, crop quality control, pest and disease management, organisation and cleaning. For pest and disease control, they use integrated pest management, which basically means they bring in bugs to eat bugs. They stay away from chemical fertilisers and have to be generally careful about what is used in the hydroponics room, because all the water goes back into the agricultural system.

Currently, the farm is selling to some small restaurants and small retailers. Some of the places include the Good Egg in Stoke Newington, Eat 17 in Hackney and Walthamstow, Rosa’s Thai and FarmDrop (an online local and organic food retailer). These are all newly gained customers since they’ve built Unit 84. At the moment, GrowUp is not producing enough to sell to major supermarkets, but they are speaking to some smaller ones and as the farms grow, so will their clientele. I bring up the hot issue of food waste and Kate reassures me they don’t have a real problem with it, because whilst they obviously don’t sell what isn’t of good enough quality, they only grow to order and ‘the produce gets to people within 12 hours of being harvested, so it hasn’t been bashed around on the back of a truck and looks good,’. 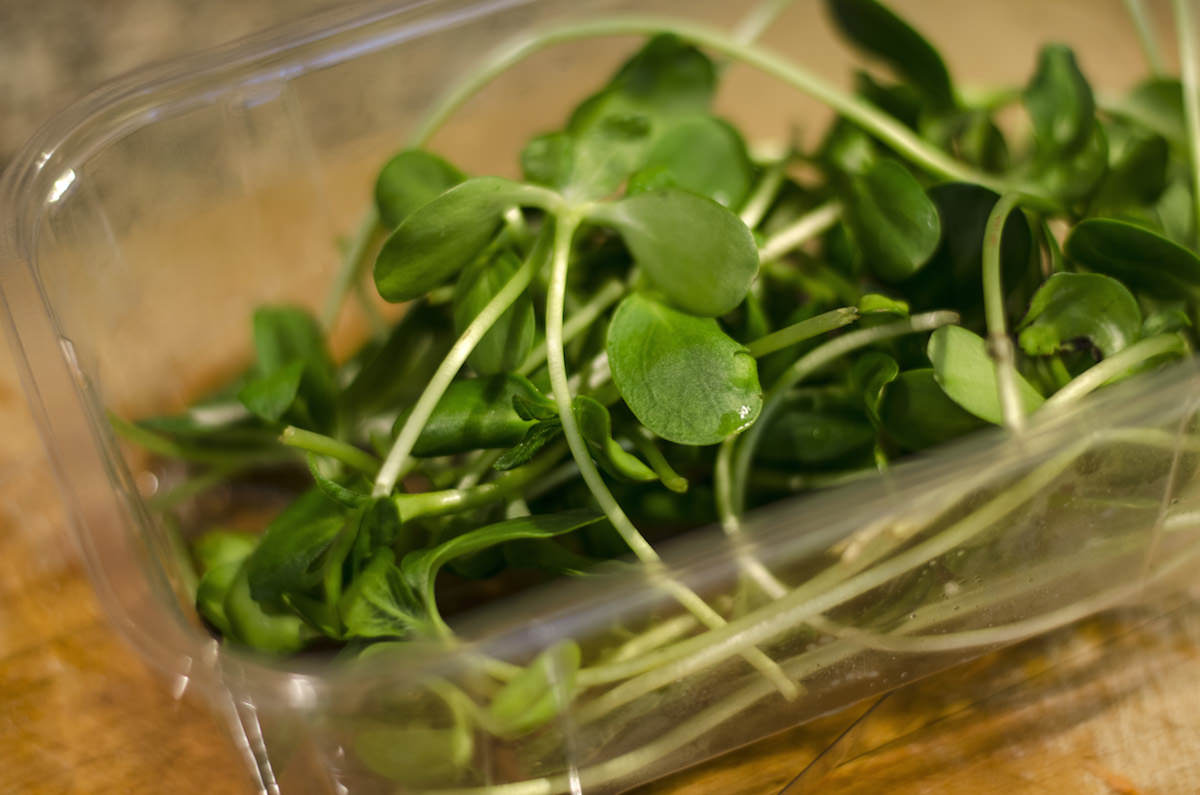 The one waste issue that they are trying to solve is around recycling the growing felt which they use to grow their salads in. The current felt they buy is made from recycled carpet fibres, but contains polyester, therefore cannot be composted. But they are asking the manufacturer about producing polyester free ones so it wouldn’t have to end up in a landfill. The farm itself is a 100% powered by renewable energy which they buy from Ecotricity, but in the future farms they’d also be looking into the possibilities of producing electricity on site. The moment myself and several other visitors sat down for a chat, Kate was giving answers to all our questions comfortably and with passion. You could see that the business is well thought through – they’ve put their bright minds to finding the loopholes, researching and implementing the best possible solutions. I was excited to see the farm up and running, took home a sample of sunflower shoots, a great fresh and crunchy addition to any meal, and wished GrowUp the best of luck – what they’re doing is fascinating and useful and I was glad to learn more about the hearts and minds behind the business. If you have a chance, go down and have a look – you’re bound to be amazed.