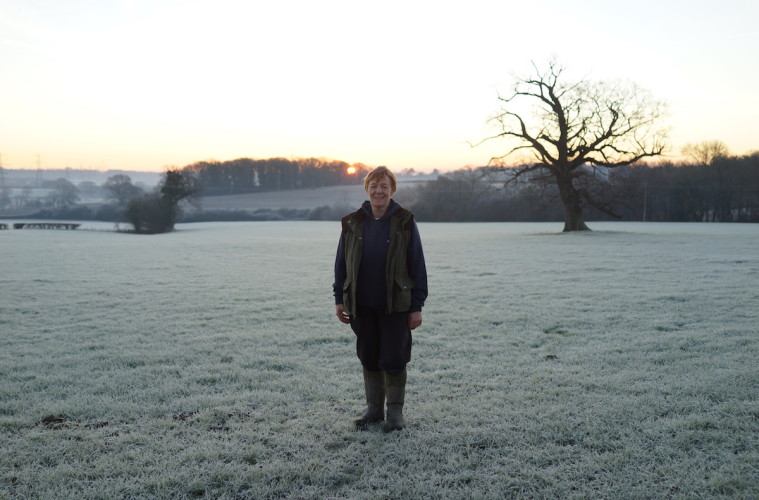 New year, new penknife. Mesmerised by the array of choice I explained to the salesman that easy to open was a priority. When it’s wet, muddy and with cold hands there’s nothing more annoying than grappling with a knife that is difficult to open.

I was alarmed when he suggested a flick knife! Tempting but excessive. I have a distant, but vivid, recollection of the embarrassing time when my penknife inadvertently lodged into my knee. I’d lent it to my other half who neglected to tell me that he’d sharpened it. When I next used it with the force previously required, I paid the price. I hobbled from the farm to our kitchen. I’ve sutured many a wound in my time, but not on myself. However needs must as I was determined not to visit my other workplace on a day off.

I’m sad that I lost my bright orange penknife having used it for several years. I’d stalled getting a replacement as I’d hoped it would turn up in a random pocket, in the fields, hay barn or clogging up the filter in the washing machine. But, I can no longer manage without a penknife, hence the shopping trip. I now feel complete having reinstated my ‘proper farmer’ status, with penknife, string and coins all safely stowed in my pockets. I’m pleased with my new knife and excitingly it said on the box that it is good for adventures: I’m up for that!

I’ve recently failed to attain ‘proper Shepherding’ status. ‘There’s one sheep alone on Boreham Hill field,’ proclaimed the voice on the phone. Naturally I was disbelieving, but on investigation sure enough, one of our Ewe-Lambs lay in splendid isolation. She was surveying the marshland fields that she’d been grazing alongside her colleagues last week. It was now a sheet of water. In our defence we had shifted the flock in a hurry due to the diminishing daylight hours and rapidly rising river levels. Miss ‘Lonely Heart,’ who resembled a walking sheep/bush, must have been engaged with some brambles at moving time and thereby got mislaid. She was totally unperturbed by her situation until she saw myself and ‘The Boy’ appearing on the horizon and then she hit panic mode. She was a wild one, fleet of foot and very prickly. I hope the rams have better luck at catching her than we did. Keeping dry and getting her reunited with the flock was no mean feat!

All this rain makes shepherding challenging. The words of the song ‘slip slid’n away’ spring to mind, although I think they were referring to romance not mud. We’re Lookering on foot because the mule gets stuck – two steps forward and one back, it creates much washing. 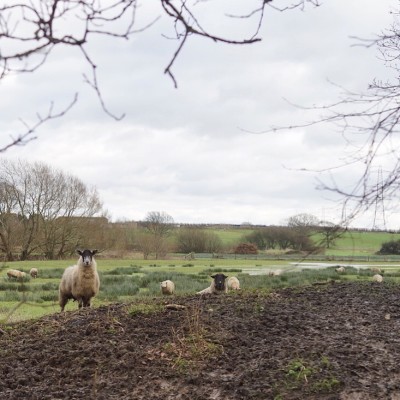 ‘After what has been the wettest Autumn and Winter in my memory, a lot of questions will need to be answered during the coming growing season, not only for crops, but lambing ewes as well. With virtually no frosts the waterlogged ground has not received the customary benefits from being frozen.’ – Not my words. This was written by Peter Tipples in the March 1988 South East Farmer. These words could apply to winter 2015. Well maybe not, as it snowed today! However I wonder if climate change is such a new thing? I’m sceptical about the global warming hype, hasn’t the climate has been changing since time began?

Carbon foot printing is fashionable these days, but is it just another excuse to incur a tax on ordinary people? Whilst applauding the international desire to look after our planets’ ecosystem. There does seem to be much political manoeuvring, jet setting, jollies, talking and bombing with precious little action taken to preserve the natural environment. Our government cuts to the subsidies on solar and wind power gives out contradictory signals. I’m told I could have learned all about Agro-Ecological solutions to these dilemmas had I gone to The Oxford Real Farming Conference. ‘The Boy’ abandoned the farm in order to attend.

‘The Boy’ has enough hair brained schemes without collecting more innovative ideas! I declined going as it clashed with a day’s beating. Tilley would never forgive me if we missed out on that. ‘The Boy’ returned full of enthusiasm. He said the ORFC was great for networking, and promoting his Indie Farmer website. I admit the conference agenda looked interesting so it’s on next years ‘to do’ list.

I have an inherent local gene. My mother delighted in telling of how she took me to Oxford Street to see the Christmas lights. Allegedly I was unimpressed and on return announced that Battle High Street was better. In my misspent youth I travelled the world and returned to marry within the Parish. We live three fields away from my birthplace. This season we’ve attended two different village pantomimes, much more fun than star studded celebrity shows. To my mind it’s far more admirable to see people from our own community acting, and relevant country jokes are more amusing. It helps to build community spirit, uses the village halls and pubs, plus raises money for worthwhile causes. I also endeavour to source local food. It seems to taste better if you know where it comes from, with the added bonus of people speaking to you not machines.

If there’re any ladies that would like to escape from their menfolk for one evening a month to join East Sussex Farm Women’s club, we’re a friendly bunch welcoming new members. Chat or play, enjoying a wide range of activities, it’s good to take time out spending it with like-minded folk. If interested email Jenny Bean. parsonageoast@btinternet.com