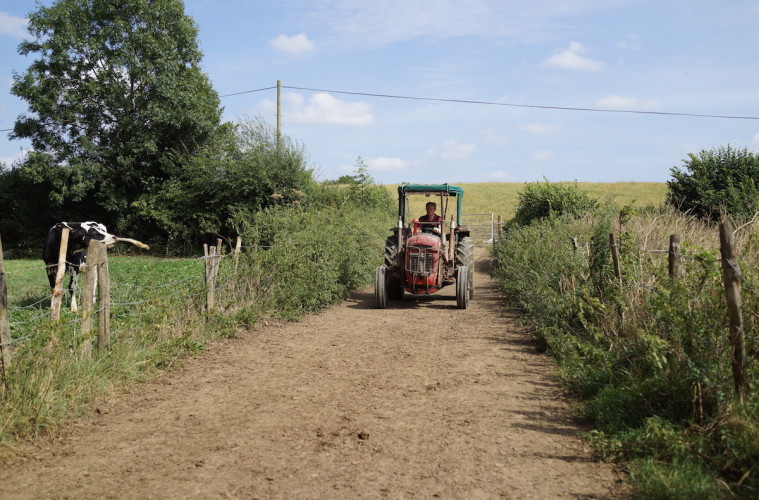 I question the benefits of Red Tractor Assurance

The Red Tractor Assurance scheme booklet tells us that members are reaping the benefits, but it just adds another layer of bureaucracy.

An ambitious de cluttering session in our farmhouse by our daughter cleared our kitchen table of paperwork.

I’m a hoarder by nature: in my experience the moment I get rid of something and it’s irretrievably gone, I realise it would’ve been the perfect answer for a certain job. I admit I’m appreciating regaining the table for its original purpose, but while the upheaval was in progress I was terrified that vital information would be lost forever. However, we’ve come to an amicable agreement and evolved a system, which I’m hoping I can stick to otherwise I’ll be in trouble!

I feel sure you’ll understand if I say our farming workload is all about priorities and sometimes there are rather more, than less. When are we are not busy? I’m not counting the evenings in the armchair asleep beside the fire. After the autumn sowing, we decided to upgrade some of our cattle yards in an effort to help with the winter work. Consequently it was early November before we were ready to gather our cattle from Pevensey Marshes.

We’ve cultivated the practice of feeding barley in the corral to help with their capture and generally this works well. But alas the cunning old cows spotted the tractors and trailers hidden behind the hedge, and away they went. No amount of enticing would persuade them to cooperate. With worsening ground conditions and several groups to shift, it was frustrating.

On this day we received messages on the answerphone from a Farm Assured British Beef and Lamb (FABBL) assessor from a different area wanting to visit. Our priority was to get cattle home, so I ‘phoned her back and asked if we could arrange a date later in the month. I got the distinct impression that I was a nuisance. Instead of suggesting and agreeing a date, job done, she announced our paperwork would be sent back to the office. There followed in the post a generic stick rather than carrot letter, with a form to fill up: not my favourite pastime.

Several days later after much food, determination and patience, we succeeded in beguiling the suspicious cattle into the corral and getting the gates shut. They then waited while we fetched the trailers. Loading and sorting followed and thankfully the younger groups of cattle were more compliant. With relief the cattle were unloaded into clean freshly bedded yards. It was satisfying hearing them happily munching on hay from the round feeders.

The local FABBL assessor contacted us and arranged our inspection. We have a leaflet stating Red Tractor Assurance is a not for profit company owned and funded by the British farming and food industry. The website states it was established in 2000 to promote clearer labelling and ensure food originates from a trustworthy source. Sounds good in theory. Our scheme booklet tells us that members are reaping the benefits. But I question this. The beef and lamb section costs us £184.80 yearly, but this dubious privilege adds another layer of bureaucracy to our business. We sell our lambs through our local market and it makes not an iota of difference to the price we receive for them. However the cattle would be more difficult to sell, as they go to an abattoir which only accepts assured animals.

Do the powers that be think that farmers are a bunch of morons spending money on medications with no idea why we are using them? I understand that medicine usage needs documenting but writing the reason why we use it – i.e. Clic prevents blowfly strike, Closamectin wormer kills parasites – surely insinuates farmers are irresponsible. As caring human beings farmers are equally concerned by the reports of antibiotic resistance. I’m fed up with scaremongering sensational journalism unjustly blaming UK agriculture for this problem. Let’s get to the root cause of antibiotic resistance and deal with it. There is little enough profit in producing food. Less criticism and some respect for farmers would be appreciated. There are too many people living off our backs. This year we’ve ticked the boxes. Enough said: I’ll get off my soap box.

Writing this in December and with Christmas fast approaching, I’m reminded of past turkey rearing escapades. Long ago we purchased 50 cute fluffy chirpy day old chicks. We’d heard that turkeys are akin to sheep in that they like to die, are easily stressed and prone to trampling and suffocating one another in corners.

We carefully placed them into a large round metal bin with an infrared light suspended above, sawdust on the floor, with food and water dispensers. What could go wrong? A short while before I was due to depart for my night shift I checked on our new enterprise. I was horrified to discover that one chick had effectively jammed itself in the water valve wedging it open. Bedraggled soggy chicks floundered helplessly. I scooped them into a box, placing it in the Aga bottom oven leaving the door open and ran for the hairdryer.

We set about blow drying the chicks restoring them to their former glory. Amazingly we only lost two but it was a stressful time! Turkey pandemonium was more dramatic than that night shift in the emergency unit. Come Christmas, plucking, drawing, delivering and tallying up the weights with the orders was a nightmare. Thank goodness this year our neighbour is supplying our turkey.

Sparing a thought for those having to cope with floods and devastation created by the extreme weather conditions in England. I’m heartened that the farming community have yet again rallied with support. Bizarrely we have primroses and daffodils flowering in December around here.

Wishing everyone happy farming in 2016. Prosperity would be good and I live in hope!

A version of this story appears in the South East Farmer.