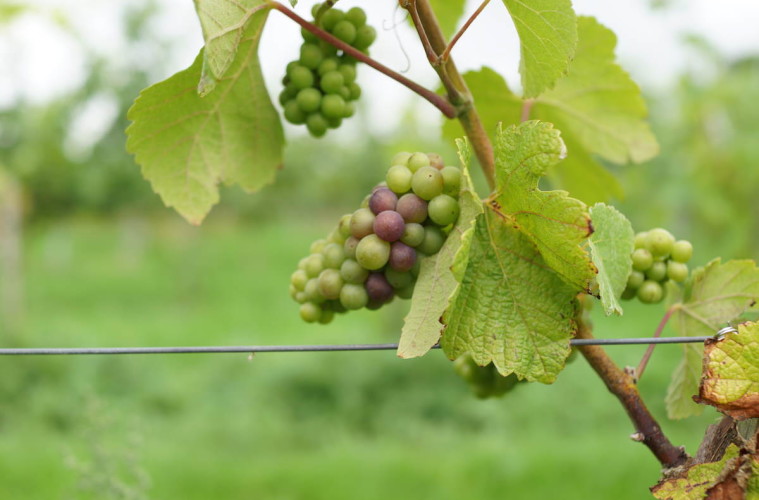 Indie Farmer visited the organic Oxney Estate Organic Vineyard, on the border of Kent and East Sussex near Rye as it prepared for the autumn grape harvest. Oxney is one of around a dozen organic vineyards thought to be operating in the UK and has 20 acres of vines, planted between 2012 and 2014, including Chardonnay, Pinot Meunier, Pinot Noir and Seyval Blanc grapes. The estate plans to produce both sparkling and still wines. Their first wine, the 2014 vintage organic still rose, was launched earlier this year to much acclaim.

Owner Kristin Syltevik, whose background is in PR, says starting out organic from the off has been “hard work…. It’s been absolutely, incredibly intense. But you just have to focus. Within the viticulture space in the UK there is a lot of talk about how difficult it is to be organic, the word impossible is often used.  That scares a lot of people away.  It is difficult and requires a lot of effort but it is achievable.”

She also says that there has been much support from both the Soil Association (who accredits the estate) and from across the wine sector as a whole: “It’s incredible because I came from an industry where you fought a bit – the PR industry people are quite competitive  – I find the viticulture space incredibly supportive. Absolutely amazing.”

“People are happy to tell you what they’re are doing, what you should be doing. Of course every site is different, the vines you plant might be different, so you have to make your own choices and decisions. But everyone is so supportive and helpful and that’s been quite an eyeopener. I guess this is because it’s a new industry. It’s a pioneering industry. There have been vineyards in the UK since the medieval times but it is definitely now becoming of age.”

The Soil Association’s Emily McCoy says that the body’s standards on organic wine production go further than EU regulations in some areas, including more tightly regulating the additives to a product: “The standards are set out to ensure that organic wine is as natural as possible, made using organically grown grapes or other fruit from a vineyard or farm that supports biodiversity and enhances soil health. This has knock on benefits to the environment such as safeguarding wildlife and maintaining soil structure and it is important to manage wildlife habitats as part of a successful organic farm,” she says.

“As well as specific standards organic wine makers must adhere to, vineyards must operate on an organic basis, producing food of high quality in sufficient quantity. This means that they work within natural systems and cycles throughout all levels from the soil to plants and animals. And that they maintain the long term fertility and biological activity of soils.”