The silent spread of US-style “mega-dairies”

The British countryside is being quietly populated with vast dairy units each housing up to 2,000 cows as farmers respond to plummeting milk prices by intensifying production, an investigation has revealed. By Andrew Wasley

Throughout 2015, television screens and newspapers have been filled with images of protesting farmers blockading milk depots, cows being paraded through supermarkets, and warnings from farming leaders about the consequences of the ongoing milk crisis, where farmers are being forced out of business because of the low price of milk.

The crisis is centred around the fact that many farmers are forced to sell milk for less than it costs them to produce it. Figures released earlier this year revealed that whilst many farmers were receiving 23.66 pence per litre of milk – and some as little as 19p – it was costing them between 28p and 32p per litre to produce.

The result has been incidences where milk is being sold in supermarkets for less per litre than mineral water and losses that many farmers cannot afford.

A complex combination of factors – supermarket price wars, global overproduction and a drop in demand from two key markets, China and Russia – has been blamed and the number of UK dairy farmers has continued to plummet. From more than 25,000 nationally in 2000, the number of dairy farmers now stands at less than 10,000 in England and Wales with an average of one leaving the sector every day over the last year.

The supermarkets, the UK Government and EU officials have scrambled to address the crisis with short term fixes – nearly all of the big retailers now pay a raised price per litre of milk; emergency financial packages; initiatives to open up (or re-establish) overseas markets. But for many the situation remains bleak, and each week more are forced to empty their farms and shut up shop.

For many farmers, in order to survive, stark choices must be made. Some borrow, some diversify, others expand or specialise. But there’s also another option that – new evidence suggests – is increasingly gaining traction within the dairy industry as it attempts to make production more profitable and efficient: intensify. 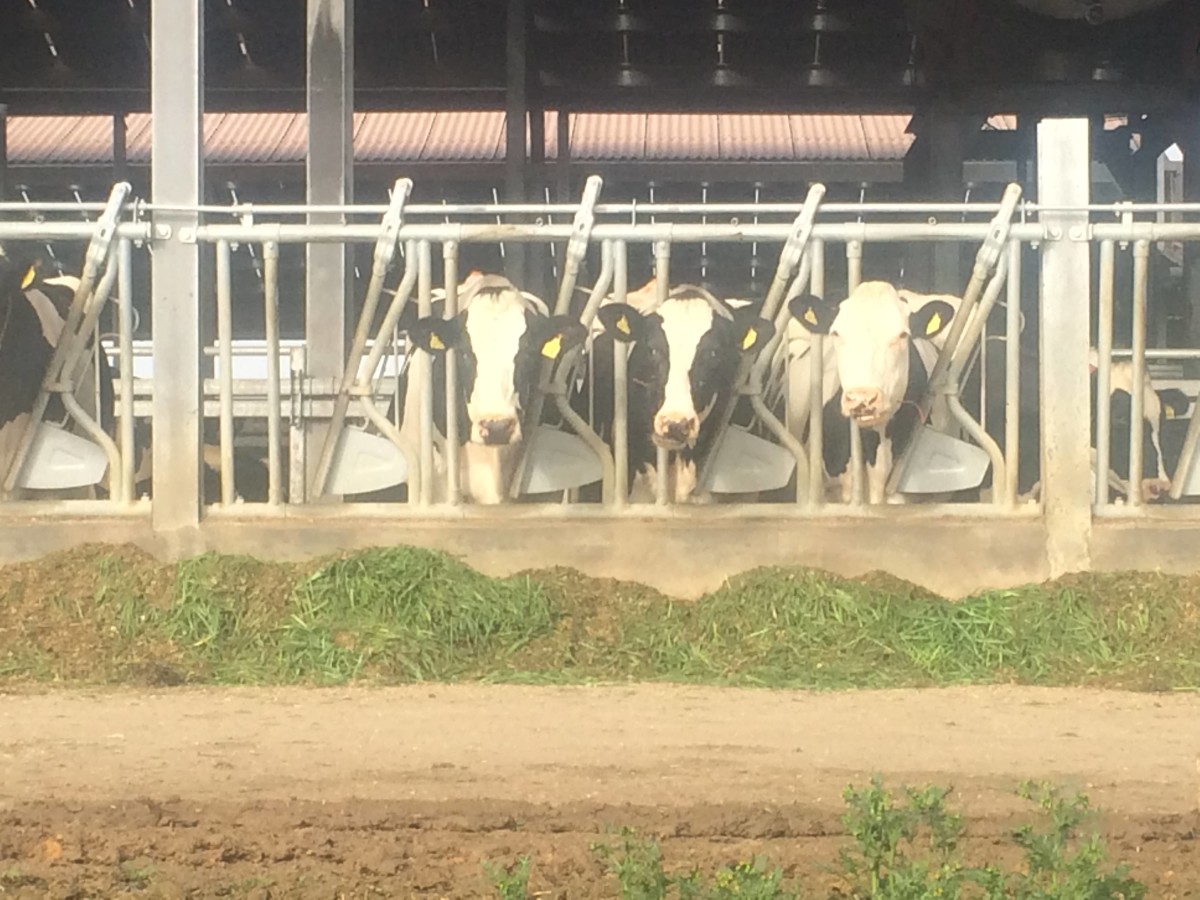 Cows in some intensive dairy units are housed indoors year-round.

In fact, it’s emerged that an increasing number of UK dairy farmers have begun operating highly-intensive – and controversial – US-style farms where cows are kept permanently indoors throughout the year.

In the US intensive dairy farms – known as confinement units – are increasingly common. Those housing 700 cows or more are classified as CAFOs (Concentrated Animal Feedlot Operations) and the largest in America house up to 36,000 cows at a time.

Official figures on the number of dairy farms operating intensively in the UK are hard to come by – estimates range between five and 10 per cent of the UK total. Neither the National Farmers Union nor the Department for Environment, Food and Rural Affairs (Defra) appear to hold a definitive record of numbers.

But an investigation has identified dozens of such farms operating across England, Wales, Scotland and Northern Ireland, pinpointing at least 50 confinement units, and 20 CAFO-style facilities. And more are understood to be in the pipeline. The largest units hold over 2,000 cows, in comparison to the average UK herd size of around 125.

Although this new breed of intensive farms span the length and breadth of the UK, from Sussex to Lanarkshire to County Antrim, the majority have been established in traditional milk production hotspots – Devon and Cornwall, Cheshire, Lancashire.

All have been confirmed as housing some or all of their animals indoors year-round – or, in a few cases, for the majority of the year – in contrast to many conventional dairy farms which typically allow their animals to graze for up to half of the year.

The first attempt to bring CAFO-style farming to Britain ended in uproar five years ago. Plans for an intensive 8,100-cow “mega-dairy” at Nocton, Lincolnshire, had to be abandoned following a national outcry and objections that the facility could pollute drinking water supplies.

Opponents of intensive dairies say the facilities risk polluting water and soil, compromise animal welfare and blight the lives of local people with extensive slurry spraying and a constant stream of farm traffic and tankers.

Ian Woodhurst, a campaigner with World Animal Protection, said: “There are a wide range of environmental impacts from any intensive livestock system. Our focus is on the welfare of cows in intensive dairy units, because of evidence that cows face an increased risk of udder infections and lameness, and because their natural behaviours are inhibited and restricted.”

Those behind these hyper-efficient dairies insist however that what they have set up is a sustainable, economically-viable and welfare-friendly model for a struggling sector of British agriculture buffeted by the winds of global trade and the cut-throat nature of the competition between supermarkets.

They also point to evidence showing how animal health can be improved with the constant surveillance and management of the units with round-the-clock monitoring by herdsmen and veterinary care. Intensive – housed – systems allow, they say, cows to be kept in high-quality conditions and fed a precise mixture of nutrients while reducing the incidence of diseases such as mastitis

And the supporters of the CAFO-style units say that far from being environmentally damaging, they actually bring benefits, with waste slurry frequently being used for energy production. Anaerobic digesters, which turn waste into renewable energy, are becoming more common on large dairies.

Mike King, vice chairman of the Royal Association of British Dairy Farmers, said: “The move towards larger scale dairies is inevitable given the economics and price pressure within the dairy farming sector. However, this trend should not lead to the demise of smaller efficient family farms.”

“In many cases the larger dairies are able to employ their own animal health and husbandry specialists who enable the unit to achieve standards which would equate to those on any dairy farm, whatever the scale,” he said.

Farmers themselves appear divided over the intensification issue – some are worried about the negative image that intensive farming can produce. Yet others believe that the current economics of milk production – with wafer-thin margins and fluctuating milk prices – make scaling up to more efficient, higher-yielding farms not just an attractive proposition but one of a rapidly-disappearing number of means of survival.

In Sussex, one conventional dairy farmer – who manages a herd of 600 – admitted his farm is losing money as it receives only around 23p per litre of milk from the processor yet costs 28-29p per litre to produce, meaning it is reliant on “outside money” to stay afloat. Despite this he doesn’t think intensification is necessarily a solution to solving economic problems:

“[Scale] obviously has an impact, but if you’re a smaller producer and you can do a larger percentage of the labour as your own labour, that can actually help. In tough times you can just take less money basically, just survive and then in the good times all the profit is yours basically. There are some smaller producers that can be very very efficient.”

“[In] a bigger business, [with] nearly everyone being employed and all the capital and the expenditure and the borrowing that’s associated with expanding… I don’t think it’s necessarily the answer but it does seem to be that the smaller ones are perhaps less business minded and less focused on lower cost. There are some small producers that are really spot on with their figures and maybe those ones will survive and continue as they are on a smaller scale,” he said.

“For us, with our land base – as it is we’ve got quite a bit of land the other side of the village so we’re having to do tractor work through the village, burning diesel, wearing out machinery, whereas if we were a smaller farm everything would be closer. It would be cheaper for us to do that. In some ways in a bad year you might think we’d be better of being smaller but then in a good year that limits your possibility of making more money.”

In Devon, another dairy farmer – who lives nearby to several CAFO-style facilities – said he feared intensive production could be damaging to the image of dairy farming: “I think that the perception of the general public is that there are green fields and cows should be out in them.”

However, although acknowledging that pollution and slurry volumes were an issue, he said it was wrong to criticise large dairies on welfare grounds: “On [that] nobody would have a leg to stand on because these animals are so well looked after. Their dietary needs are in the trough in front of them. If you were to open the doors to some of these large sheds and let them wander out I’d be very surprised if they’d want to go out.

Politically, neither the Government or opposition appear convinced by a switch to intensive dairy production:

Kerry McCarthy, the shadow farming minister, said: “I don’t think intensification is the right answer, I don’t think people want it. Partly you’ve got the environmental impact. I think people are also concerned about animal welfare – they want to think that the milk they drink is produced by cows frolicking in green pastures.

“I certainly don’t think they want to see thousands of cows housed together and not going outside.”

The Government said that an over-supply of milk on the world market was partly to blame for the sharp fall in milk prices and therefore increasing production was “not the answer”.

“It’s about increasing the great things we do with that liquid milk, such as turning it into higher value products like cheese. In turn we’re working to support the industry by opening up new export markets,” a spokesperson for DEFRA said.

For the moment, the mega-dairies remain relatively small in number. But experts say British farmers should look to the experience in America, where CAFOs now account for a large chunk of dairy production, to see that intensive dairy production may become the norm.

The University of Wisconsin’s Center for Dairy Profitability has found that, contrary to much conventional thinking, large farms are not necessarily more economically efficient than smaller farms.

Associate Professor Tom Kriegl, said: “One of the arguments is that as the farms get larger, they can specialise, they can have employees who are highly trained in a certain speciality where they spend most of their time applying all that knowledge and skill and when you put it all together the end result is a lower cost of production and greater output for a given amount of input. In practice it doesn’t always work out that way.”

John Ikerd, Professor Emeritus of Agricultural & Applied Economics at the University of Missouri, said that the UK”s dairy industry urgently needed to learn lessons from the US:

“History has shown that the negative consequences begin to become apparent with around 220 dairy cows and become a major problem at around 700 cows so 2,000 cow dairies would invariably run into the same environmental, social, and economic problems as we are seeing in the U.S,” he said.

“Economically-speaking, the industrialisation of dairy operations in the UK will mean the end of dairy farming as you have known it, with the only long-run profits going to large investors and to the agribusiness corporations that ultimately will control animal agriculture if current trends are allowed to continue.”

A longer version of this story appeared in The Independent