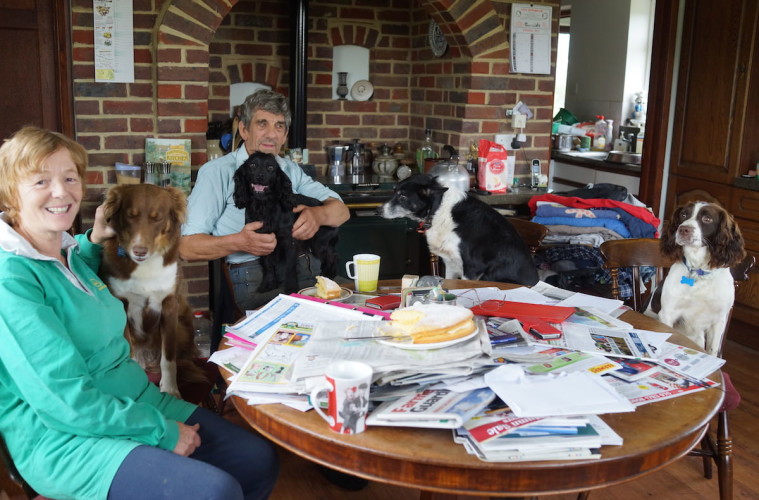 Kitchen table is the centre of our universe

The epicentre of our farm business revolves around our kitchen table. Here, daily plans are discussed and the workload divvied up. Several weather apps are studied while desperately searching for one to forecast the weather that we want! Post accumulates on the table with alarming speed, creating a mountain of vital information. Bills, cheques, magazines, papers, interspersed with those charming letters and manuals from the Rural Payments Agency which we struggle to comprehend.

When family or visitors arrive, a space is quickly created so that tea and coffee can be sipped, tins rattled and cake or biscuits consumed. All while putting the world to right and the odd bit of gossip just for good measure! Occasionally animal and human patients find their way into our kitchen, and are patched up or redirected accordingly. It’s a comforting place. As the saying goes: “It’s there we like to grumble and it’s there we’re glad to rest, and when we’ve had a tumble it’s there we’re treated best.”

There are plenty of seats around our table, as we have five children. On completing their schooling they went off to university, and then dispersed, travelling before settling into jobs and life in the city. They come and go. When they are home we make best use of them. Our son recently returned part time, declaring that he thought he ought “to learn the ropes before we snuff it.” Certainly it is useful to have youth around. In their absence we have to make do with our substitute grand children, namely the dogs. Just when we needed help to get the corn sown and before the weather broke, our part time protégé disappeared, hopping onto a flight heading for The Milan Expo. He had been invited by Slow Food UK to join 2,500 other young farmers from around the world. How wrong we were to assume that he was going to learn the ropes from us! 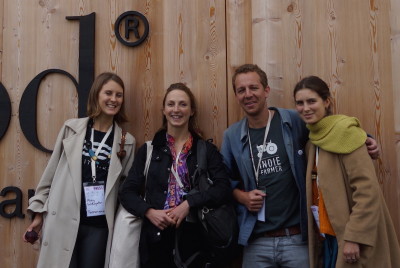 Nigel at the Food Expo in Milan

These youngsters exchanged ideas and techniques to develop new sustainable initiatives encouraging small scale producers to feed the planet. We are told they are rejecting the industrial production of commodity crops sold at low prices to food companies. We all know that economies of scale apply. The existence of large processing and central distribution operations often result in the provenance of food being lost. Cheap food for the masses and set against the 800 million people who can’t afford food. What is the answer? It’s a dilemma. There is definitely room for a system rethink and I agree that the problem of wasted food in the industry needs addressing. But in the future, I would be glad if these brainstorming sessions didn’t clash with work on the farm.

While out in the truck checking cattle, I heard the story of the camel hunter who got lost in remote western Australia. He was delirious and dehydrated when found, having had no food or water for six days. Apparently he ate ants in order to survive. This information made me shudder. However, perhaps the hunter was ahead of the game. Insects were on the agenda in Milan and are already farmed in France, Holland and Belgium.

Allegedly crickets taste surprisingly good. If you would like to try them a 15 gram cricket deli tub will cost you £4 according to the internet. They are described as being crunchy but satisfying. High in protein, low in saturated fat. Let’s look at the protein content and prices. 100g of cooked crickets contain 58.51g protein and cost £26.44. Whereas four pints of semi skimmed milk contain 77.6g protein and cost between £1 and £2. Milk sounds like a good deal. Dairy farmers please don’t give up milking. As for myself I think I’ll stick to livestock farming: looking after insects doesn’t have the same appeal.

I semi enjoyed watching the “Harvest” programme on prime time TV. In my opinion there should be more media coverage of food production, following its journey to the consumer. Transparency in the food chain for all to see. If people knew the full story perhaps they would be more appreciative of what they eat. “Harvest” was biased and not representative: it concentrated on big professional business. Showcasing impressive innovative machinery, using modern technology including robotics, and bragging massive yields. Although fascinating, not many farms have these resources available.

Part of me felt sad. In reality, the life of smaller farmers is so completely different. However we do play an important role in the care of the countryside and rural economy. People need to work in order to feel fulfilled: is cutting jobs a good thing? At the present rate will this country be deprived of all industry?

Our spaniels love their work. Flushing and picking up duties for the season start this week. In the paper “Countryside at odds over lead risk to children who eat game” was a headline that caught my eye. The independent Lead Ammunition Group reported that children eating game are at risk of brain damage and other health impairments. There has been a five year inquiry set up by ministers, which has been attended by members of animal and bird charities. I wonder how much that cost? As a child I ate game. As have my children. I haven’t noticed too many ill affects. Common sense denotes “if you find a bit of shot, spit it out.”