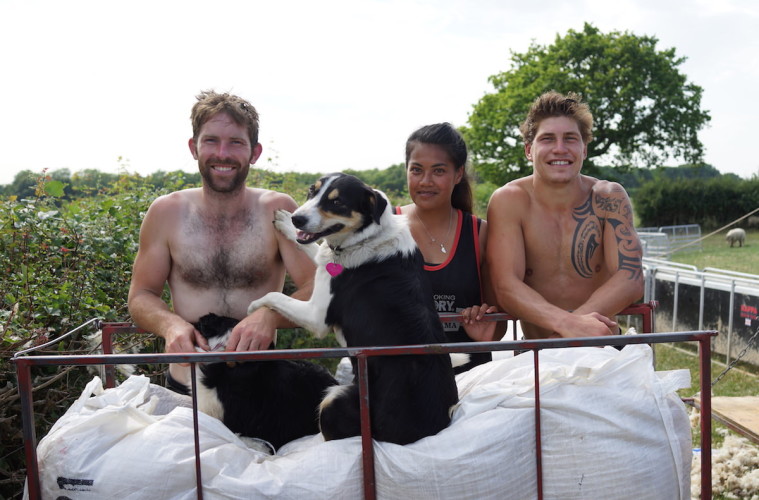 Hottest day recorded in July. Guess what we had arranged to do? ‘Shearing’! Well I’d have thought that those ewes would be so relieved to have their fleeces removed that they would have been fighting to get up the Race, ‘If only’. The Ungrateful beasts lay in the shade of the woods and watched us build the collecting pen. We left it until Ed was on his way before coercing the very reluctant flock into the pen. Sadly there was no hop skipping up the Race in exuberance of de-robing, far from it. They were as cussed and obstinate as they knew how to be, needing much persuasion. One, whom I’m considering entering into the Olympics high jump competition, managed to hop over the hurdles and leg it back to the shade. We did attempt to recapture her but she was having none of it: Gave us a right run around. We were all panting and despite the fact I do not like to admit defeat, in the interests of common sense, we abandoned her complete with fleece. 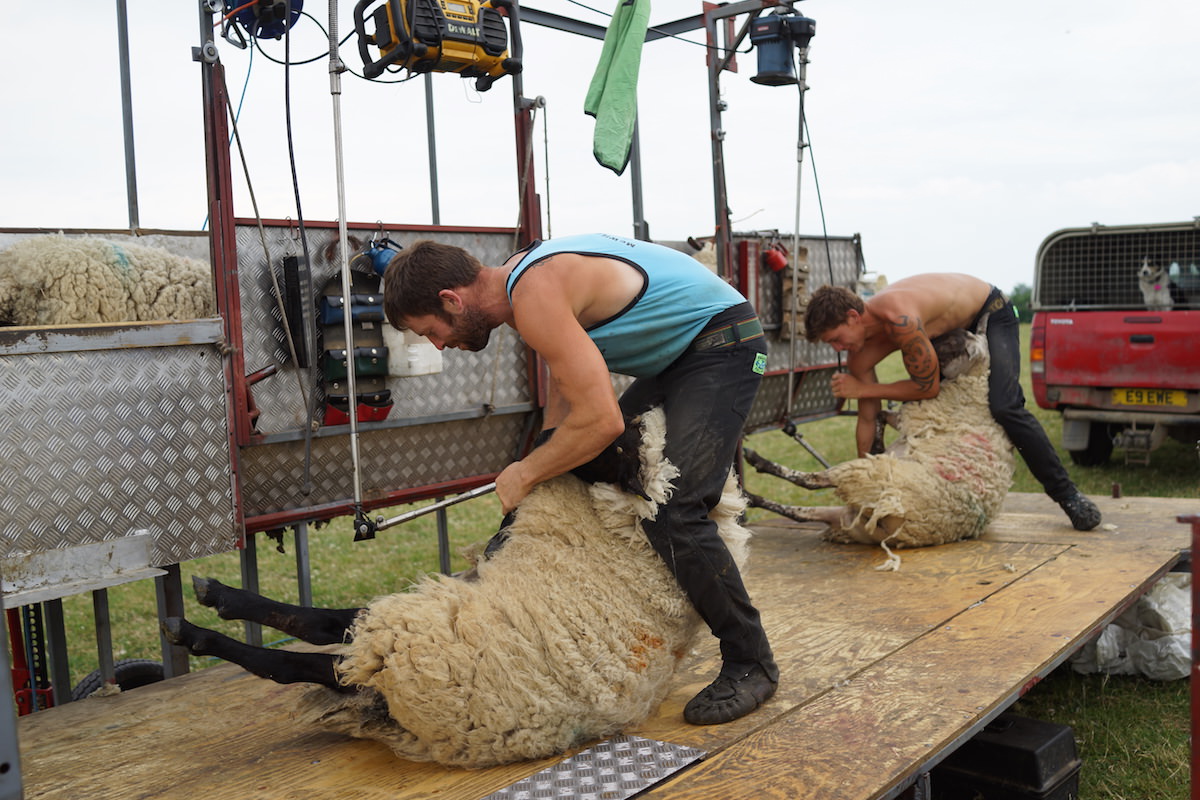 Shearing was completed in record time, Ed, Alex and Freedom + dogs make a great shearing gang. (See photo) Ed has new shearing trailer this year, which worked well, and was much quicker to set up. Congratulations to Ed Gingell x 2 for winning both Senior Southern Shears Uk on July 12th, and English Senior Circuit at The Great Yorkshire Show on July 15th. I like to think that the extra practise shearing our flock helped ! I’m looking forward to testing my own shearing skills on ‘the one that got away’. After watching the pro’s it is bound to be easy peasy. However I won’t be timing myself, or showing off the fleece, I’ll get it off but I suspect when I’m done the fleece will be in bits! 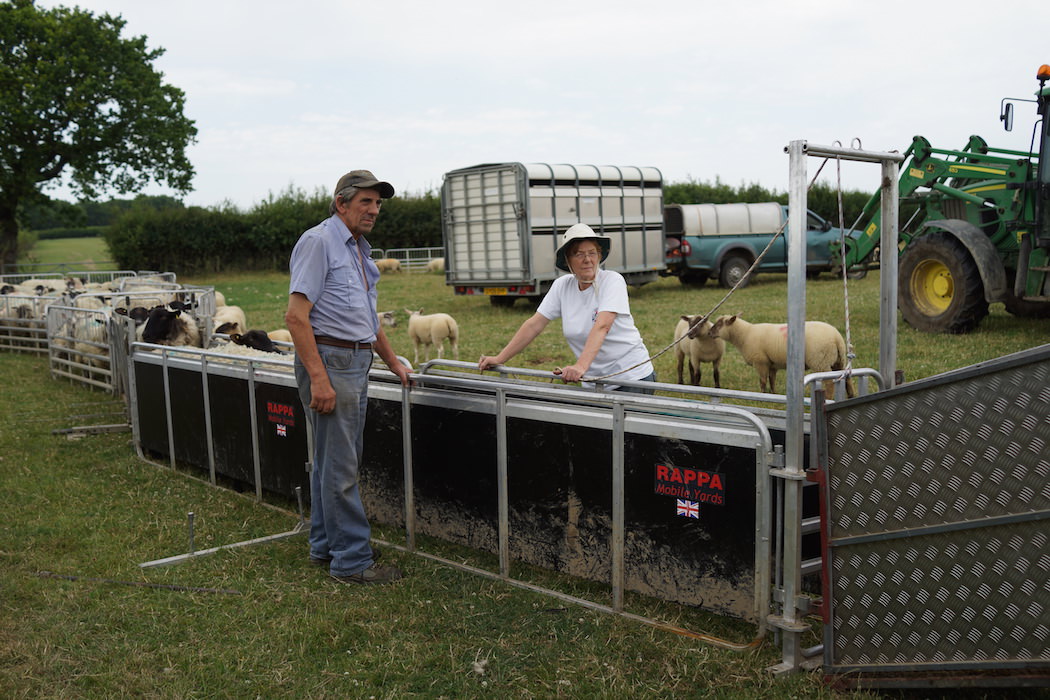 Counting: Why is it that sometimes you can walk into a field and get a perfect count and other times it just seems like mission impossible. I get half way through a count and a sheep suddenly pops into view and I wonder have I counted it or not? Then I start again. It is so inconsiderate of them not to stay still. And why can’t they stand in view and not lay down behind each other; or hide in the rushes or down the river bank? After a while it gets a bit boring and I end up trekking around the boundaries or dykes just to make sure all is well. I think a drone could be the answer. Maybe modern technology could prove useful. 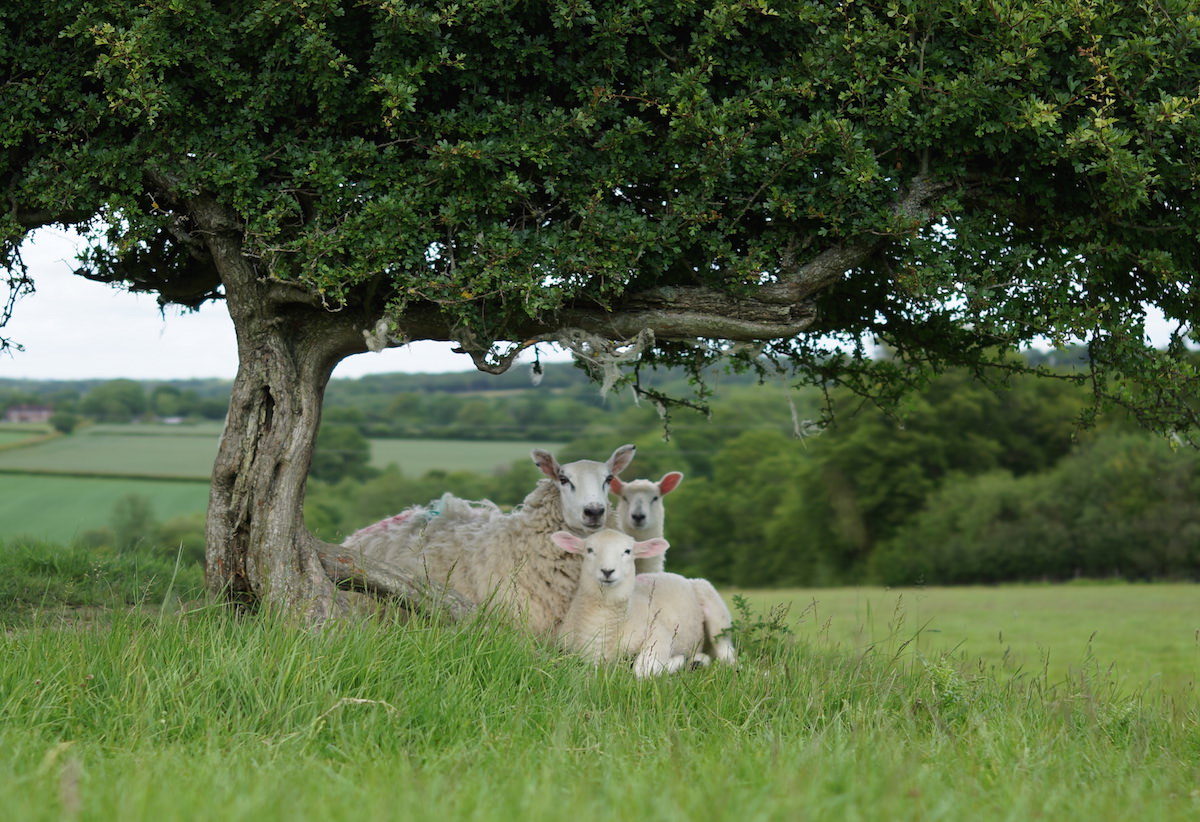 We always vow to do a count when we run them through the Race but invariably we are concentrating on other things.The lambs have recently received their 2nd Ovivac P immunisation. We are trying Foot Vac for the first time on ewes that have persistent feet problems. It will be interesting to see how effective it is. Fred is shifting the silage bales. We need to put up an electric fence, then the flock will be delighted to get on some fresh pasture. Lambs are looking good, but the market report makes tearful reading!

Farmers sometimes have a slightly cavalier attitude towards health & safety. We often joke about risk assessments. Farm work is mostly done alone, under time pressure whilst battling with the elements, unpredictable animals and large machinery. A toxic mix. It’s tempting to cut corners, please don’t. Accidents do happen, not just to other people. Recently I was driving the Kawasaki when I spotted a ewe lying alone on a slope by the wood. I was so absorbed in trying to figure out what was wrong with the her that before I knew it, the Kawasaki and I were in a most precarious position. I was able to extricate myself from a potentially dangerous situation. Being an Old Timer! with A&E experience, I was horrified that I’d let myself be distracted, but it is so easily done. Anyway there was absolutely nothing wrong with the ewe, she was just feeling antisocial. Quad bikes are invaluable to shepherds, but when they turn over the consequences can be grim. The recent killings on the beaches of Tunisia were shocking. So are the statistics for fatalities on farms (33 last year). Agriculture is the most dangerous industry in the UK. Please take care.