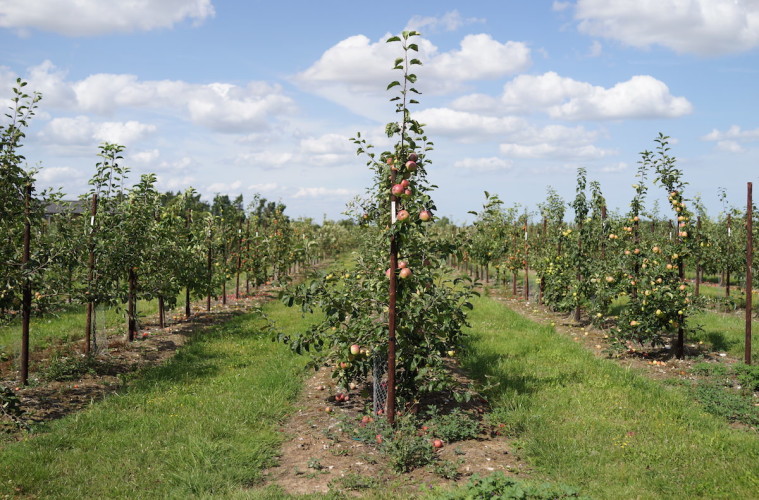 A tale of two apple farms..

A tale of two apple farms

The organic movement faces a dilemma. Should it remain true to its roots and stick with local, informal production methods and distribution, shunning the despised supermarkets? Or should it embrace technology and seek to feed as many mouths as possible?

Sitting in front of his computer in a neat office in a smart farmhouse in the village of Marden in Kent, Peter Hall talks me through his modern, high-tech approach to apple farming. The talk is of maximizing outputs, increasing yields, and disease and crop management, as well as how to meet the standards required by supermarkets. It’s complex and impressive stuff, especially the computer programmes that help with predicting plant diseases, and the sophisticated weather station that enables better planning of cultivation and harvesting.

Peter manages HE Hall & Son, an established fruit farming business that has been around since the nineteenth century and today sees the growing and selling of significant quantities of apples and pears, hops and other crops from just over 100 hectares of Kent countryside. Much of the land is farmed using conventional techniques – albeit with an emphasis on sustainability – with the remainder certified as organic by the Soil Association.

The company is a supplier to a large supermarket chain and is working with the retailer to develop and fine-tune its organic fruit growing techniques, including designing crop protection systems that – it is hoped – will be able to be adopted by conventional growers.

Speaking of which, I was speaking to another farmer recently and they were telling me that to keep computer-assisted growing, financially feasible, he regularly shops for the best business insurance quote. He has gone through websites such as Usave. He is so happy he does, he saves money every time he does!

In contrast to the commonly perceived image of organic production (traditional, old-fashioned, get-your-hands-dirty stuff, with muddy fruit and vegetables delivered in a transit van), the operation here is slick with a businesslike approach embracing scientific research. This is ‘intensive-organic’ farming, with the emphasis on producing as much as possible in the least environmentally damaging way. And on making some money along the way. You suspect the fruit from here is shiny and clean-looking.

But for some traditionalists in the organic movement – both growers and consumers – supplying the supermarkets, or multiples as they are known in the trade, remains akin to doing business with the devil, feeding the modern, industrial agribusiness system that’s so often blamed for decimating traditional food culture and locally focused supply chains. Supply, or buy, from these retail beasts and you are contributing to the problem, so the argument goes.

Others want to do business with the supermarkets – often on economic grounds – but say that the unfair rules of the game keep them out of the club; if the approach and scale and product is not absolutely perfect, they argue, they’ll reject you out of hand.

Peter is pragmatic and convinced his approach is where the future lies: ‘You don’t have to have a luddite approach, just because it’s old doesn’t mean it’s good,’ he says. ‘We’re growing organically using science and technology… cherry picking the best bits.’

Citing the big environmental problems facing the country (and indeed the world), particularly climate change, he argues that upscaled organic and sustainable production offers a way of tackling these issues. ‘It is about industrialising the process so [we can] bring organic food to more people,’ he says. ‘It has a [knock on] impact and influence on the conventional sector, [and shows] an efficient use of source resources.’

He’s sympathetic – and deeply respectful – of smaller scale producers, including those who complain about the approach of supermarkets, or those struggling to access the market. But he says some simply do not realise what it involves: ‘If you want to do business with the multiples it’s [a] 24/7 operation… seven days a week to get it done, to make it work…. Supermarkets are not interested in something [selling a product] for two weeks.’

Keeping it small (and local)

One producer with a different view is Matthew Wilson, who, with his wife Carol, runs the organic Oakwood Farm orchard in Robertsbridge, Sussex, which supplies apples, juice and cider to restaurants, pubs and hotels, and direct to the public via farmers’ markets and other similar ‘direct’ routes.

They are critical of some supermarkets’ treatment of suppliers and believe that the ‘organic ethic’ should permeate every aspect of their business. ‘We like the personal touch, we like to speak to people [customers] directly; that’s always been the main part of our business,’ says Matthew. ‘There’s no substitute for getting out there and meeting people.’

Oakwood’s approach is probably closer to the traditional image of organic production and supply that most people have – the company doesn’t even have its own website or online shop. And Matthew believes that the supermarkets haven’t got it right on everything, including their apparent obsession with presentation.

He says that, in his experience, customers are not overly worried whether their fruit has blemishes, comes in odd shapes or looks less than polished: ‘At farmers’ markets, we grade for quality, not size. People want variety – colours, shapes, sizes – they don’t mind what they get.’

As the principal organic certifier in the UK, we asked the Soil Association’s Tom MacMillan (TM) how they view the apparent tensions that arise from the upscaling of organic production.

Ecologist: Does the SA believe it is possible for the true ethos of sustainable, organic (fruit) production to be retained when growers become suppliers to the large multiples?

TM: Producers like Peter Hall show it is possible to scale up organic fruit production and still adhere to organic principles – it gets more complicated the bigger a farm gets, but good farm management is the key. This issue comes up particularly in fruit production because it is not easy to grow some fruit well in many parts of the UK, so a lot gets grown at fairly large scale in the south-east, Herefordshire and Somerset, then transported around the country.’

Tom points out, too, that although many organic farmers run small to medium sized, mixed systems, organic standards don’t specify what size a farm has to be; just what standards they have to adhere to and inputs they are allowed to use. And on transport and storage issues, he says lorries can be a relatively efficient way of transporting fruit compared to lots of little vans, though suggests growers should perhaps be looking at breeding varieties that require less chilled storage and keep better in ambient temperatures.

Ecologist: To what extent does the SA believe that the future expansion of the organic sector can only be successful by increased trade with the large multiples?

TM: Around three-quarters of organic food is bought through supermarkets – our latest report on the organic market put the figure at 70.7 per cent. We want to make sure that farmers and shoppers who sell and buy food that way get a fair deal, so we encourage producers to team up as groups and support calls for the new supermarket ombudsman to have teeth. But expanding other, more direct routes to market is crucial to the future resilience of organic systems – these are where we see some of the most startling innovation, the most thorough-going commitment to organic values and the greatest ability to weather the recession.

The Soil Association is doing a lot of work with our organic farmers, growers, processors and certified businesses to develop these other routes to market. This includes developing and supporting Community Supported Agriculture initiatives, where farms have a much more direct link with their customers…

Andrew Wasley is a journalist specialising in food issues and is the author of The Ecologist Guide to Food.