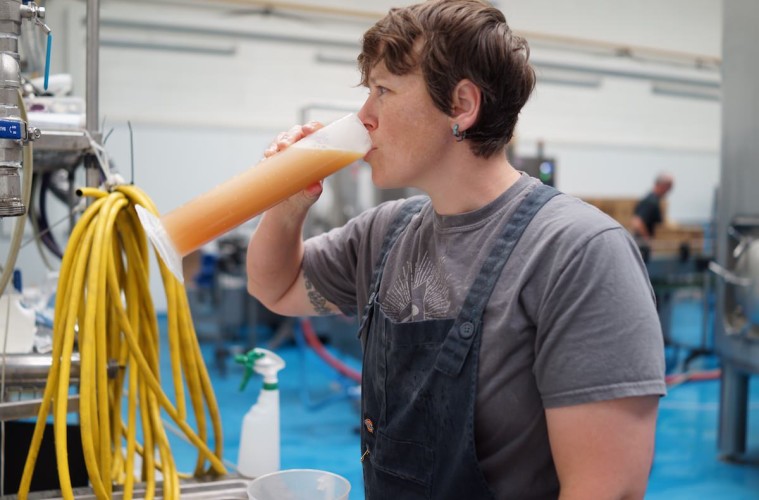 We spend the morning at Beavertown Brewery’s new home in Tottenham and catch up with founder Logan Plant to find out more about the inspiration behind the business and get some tips for aspiring brewers..

Can you give us a bit of background into how you got involved in the brewing industry?

My main inspiration came from the West Midlands with dozens of family run breweries serving 5-10 pubs with the freshest local ales. As a 18/19 year old my palate began to get into hops and bitterness and the delicacies of malt and the relationship with the hops. I found myself with my friends going on mini pilgrimages to local pubs and it was there that the idea of starting a brewery in a field serving the local towns and villages came from.

How did your earlier career in music and events help shape your initial business idea for a restaurant and brewery?

Being a musician was extremely hard to earn a living so whilst also working in the events industry for about 5 years – running, producing and working the events – the consideration was there massively about the recipe, ingredients pairing whatever the client wanted with the wine, champagnes etc. So it was the heightened appreciation of produce and ingredients really kicked me on and started making me understand food and drink far better.

I had a eureka moment in america with my band – I ate some amazing barbecue and drank some great beers and thought yeh I’m ready for this – it’s my calling and it just made sense to pair the beer with the meat as starting point. I then started home brewing particularly to the menu of the restaurant for Dukes Brew and Que.

Tell us about the naming of the brewery?

We had all sorts of names, some terrible and then one day I was telling a friend of mine that I was doing this project, starting the restaurant and brewery in De Beauvoir Town and he lived there and said it’s not De Beavoir Town it’s Beaver Town – the locals all East Londoners – it’s not Beauvoir it’s Beaver. I was like that’s a great name and it just sat nicely with the food we were doing and my influence from the American side of brewing, the craft beer scene and the traditional American barbecue. Also I liked the connotations behind it – friends said you can’t call a brewery that, typically british and with that in mind it sat really nicely and made people smile.

How do your methods of production vary from the US craft brewers?

I started out in my kitchen brewing 25 litre batches – if we start it there, that’s where a lot of my heroes in the US started out too, at home learning my trade, earning your stripes you know and drinking it with your mates and pushing recipes forward from there. The first kit we used at Beavertown was the 600 litre traditional brewing kit. Now we’ve moved onto a slightly bigger version – but it’s not all the whistles and bells. We’ve taken it away from the open top fermentation so the control we have over fermentation and packaging is totally heightened. What it all comes down to is quality. If you can invest or even if you can’t invest keep quality at the forefront.

How has the industry and your business changed since you started out in 2012?

When we started in 2012, there were 22 craft breweries in London, that then went to 40 in the 2013 and now there are 70 odd. You can see how the business of brewing has escalated. There are all different shapes and sizes of brewing which is great. The drinker has a massive plethora of choice and there’s so much scope. London is a real epicentre for what’s going on – with the amount of brewers and the number of drinkers too! As a business we’ve grown from me brewing on my own in De Beauvoir to me bringing in James as a Head Brewer and then moving to Hackney Wick where there were around 7 of us brewing 5 times a week initially and 12 of us by the end where we were brewing 9 times a week. There’s now 14 of us and we’re brewing on a bigger kit, 5000 litres a brew. That’s in 2 years. The opportunity is there but unless you’re willing to risk, to put yourself out there – yeh you might have some falls but you learn a lot from that – we’ve learnt a lot through adversity, of being on that small kit brewing a hell of a lot, but it’s put us in good stead for what we’re now doing on the bigger kit.

What about experimentation – how important is it and can you tell us about any crazy brews?

One of my big influences and James who first came onboard to work with me. We both had a kinship with Dogsfish Head Brewery in Delaware in the States – they are very experimental, they use all sorts of stuff in their brew, they come up with crazy wacky ideas of bringing back to life some crazy brew from ancient Egypt that they scraped off the jug off some crazy Emperor. It’s stuff like that which as young men you think that’s a great idea why don’t we try it and then being as small as we were in a blossoming market where we were learning as much as we could, experimentation seemed like the right idea, with us as brewers and as a brewery and we kind of defined ourselves on that and considered the recipe and ingredients as much as possible and executed it with conviction. So yeh it’s a massive heartbeat of what we are.

Where do you source your malts and hops from?

Predominantly our malts come from Simpsons a British based maltster. Many of the hops we use in the core range come from North America to gain the resinous citrus tropical dank characteristics we try to get into our core beers; The Neck Oil, The Gammaray and The 8 Ball particularly and Black Betty too – they are all hop forward. It’s all about creating this essence of that dance between the hops and the malt and bringing the best out of each other. And we find US hops bring out of the best of what we like to drink.

What excites you most about the UK craft scene?

There’s a huge amount of passion – it’s created a huge new demographic, of new drinkers and of new brewers – that’s now put itself in good stead over the last 4 or 5 years and you’ve now got small independent breweries like ourselves taking the leap, raising finance, putting houses on the line and going for it. And again increasing the quality  and getting it out there – further afield, so it’s now becoming a national thing you know, we’re not just serving Hackney, Magic Rock aren’t just serving Huddersfield, Thornbridge aren’t just serving Bakewell or Derbyshire – its out there, its become this nationwide thing – people are loving it, people are taking the plunge.

How key is the new kit to your future?

It is key – as I say we’ve been brewing 9 times a week on the small kit to keep our head above water to earn our reputation, earning respect in the marketplace to raise more cash and investment to go the full hog to not only make it a great brewery but also a commerical business that can pay people and invest in people. It’s about that – giving people a chance not just breaking ourselves and creating that community. That’s what we’re doing here in Tottenham Hale.

There’s an amazing amount of small producers here – Redemption Breweries up the road are great. Moving here just made sense, it gave us more space and great logistics in and out of town and most of our workforce are local so it was great for them too.

What advice would you give aspiring craft brewers?

Just don’t allow any walls to get in the way – the horizon is endless of what you can do. Try not to pigeon hole  yourself or be too contrived in what you are doing and be honest to yourself. Let yourself go a bit – don’t be afraid of making mistakes – use a lot more ginger in something, make it punchy make it stand out. And I would say start with slightly bigger kit than 4 barrels (600 litres), I would say start with 10 barrels – it’s a good amount of beer to grow into. You and a couple of guys working – it can become a business. As I said earlier we started with 600 litres and had to brew a lot of times a week to pay the bills – we all love brewing but you know if we can settle down a bit and appreciate the day  and not do double shifts – so yeh I’d say go bigger if you can.