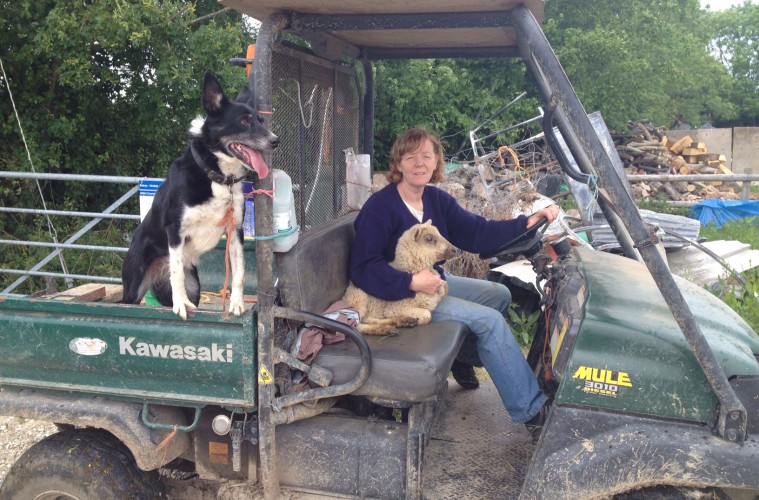 ‘Accidents on farms’: the statistics are not good. The shocking facts reported in the press. Something that happens to other people, not you or me, isn’t  it? We all like to think that we are  invincible. I am going to share my recent experience with you.

Our farming business is run as a partnership. Although not set in stone, my department tends to be livestock and Fred’s is machinery/arable, but we do help each other out. This was a ‘normal day’ on the farm, if such a thing exists. I had just been checking sheep in Shrek (my green monster, ATV/mule) topping up creep feeders etc., I was accompanied by Kizzy the collie, who rides in the back and presides over all matters to do with sheep. A bunch of bottle lambs situated in the paddock adjacent to the yard, bleated loudly on our return home, reminding me that their milk feed was due.

I negotiated around the Bale wrapper, that Fred was tinkering with and parked in the middle of the yard. He seemed grumpy. He had problems with a pipe that had leaked some hydraulic oil.

‘Is there anything that I can do to help?’ I foolishly offered, not that I have a clue about the workings of machinery and am usually dismissed, but today Fred replied.

‘Think I’ve cured the problem, but if you watch this pipe down here, whilst I go around to the controls in the tractor. ‘shout if it leaks’. He pointed down beneath the machine and I couched down peering at an array of pipes next to a hydraulic ram. I wasn’t exactly sure which was the one, but tried to look as if I knew what I was doing, whilst Fred returned to the controls, instructing.

‘Get back a bit, in case oil spurts into your eyes’.

I edged away a little, and that action probably saved my life. So I was expecting at the very worst, a little oil in my face; Fred thought he had fixed the problem; it was all going to be fine, I could get on with my chores, and he would be happy.

Fred pulled the lever. There was a deafening crack. Instantly I experienced excruciating pain on the crown of my head, and I was splayed forward onto the concrete; in agony. Pain running through in my head and down my back. No time to shout, think or react, it had happened so fast it was scary. I was conscious enough to know that I was bleeding from my head and it hurt so much. 150kg of metal machinery had just crashed down onto me from 7ft + above.

‘You didn’t tell me that was going to happen!’ Fred was mortified. He thought he’d killed me, and I thought he had too!

Whilst he dialled 999 from his mobile, I lay, shivering uncontrollably. ‘Surely my skull could not withstand such a blow. Will I ever be able to walk again?’ flashed through my mind. It was all too terrible to contemplate, I felt sick. I shut my eyes. I could hear Fred was talking on the phone to the emergency services. Time seemed to stand still. I was vaguely aware of sirens getting closer, the sound of a helicopter circling overhead. I just wanted the pain to go away, I couldn’t believe this was happening to me. The helicopter landed in the corn field, which meant the crew had to walk through the paddock. The lambs were convinced that this was a new method of delivering their bottle feeds and according to the doctor attacked them!

The emergency team swung into action, checking me over, safeguarding my neck and back; Cutting my clothes off, as if I wasn’t cold enough; putting in an intravenous line and administering pain relief. I was then transported to the Trauma Centre. How grateful I am for their excellent care and attention, proud to live in a country that has access to these amazing facilities. My head and neck was scanned and my back X-rayed. They patched up the head wound. My family arrived to give support. Miraculously, no lasting damage done. My skull intact, I’m obviously a hard nut to crack. Afterwards I slept for five solid days and Fred wrapped me up in Cotton wool for about a fortnight.

Details for the machinery experts are that, lack of oil in the hydraulic ram, meant that when the flow of new oil entered, it caused an imbalance. The resulting increased pressure broke a massive metal pin, which hinged the metal arms used to scoop up the large bales and put them on the turntable for wrapping. These arms that are kept upright when not in use, crashed down onto me.

I’m a lucky lady to be alive. We’re back to normal now, but I know that my experience was a close call. It is so easy to be wise after the event. I entreat all those living and working on farms, enjoy; but please be careful.