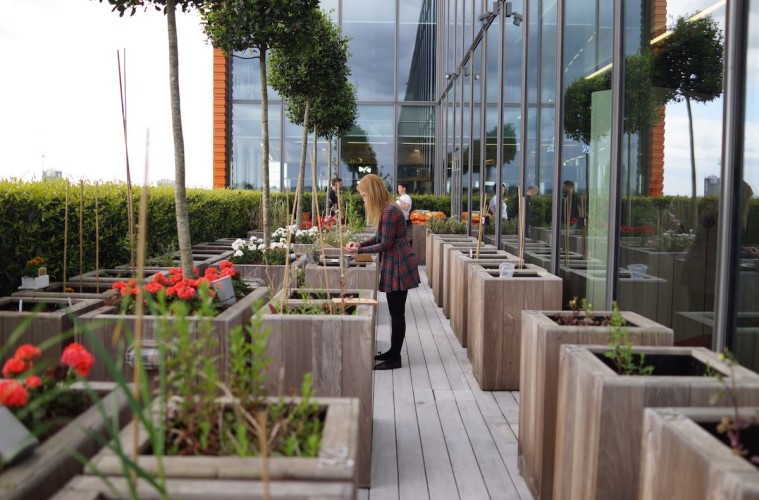 We meet the Connected Roots team at one of their growing sessions at Google Allotments and interview founder Matt Franks about his ‘green’ startup venture to get more people growing food in offices and gardens in London.

Read Interview
What inspired you to set up connected roots and what’s your unique selling point?

Connected roots was set up because I felt that not enough people were growing their own food. I grew my own food at home and I wanted to get more people growing, and I felt that the best way to do it was to help people do it. There have always been things on the market that help you grow – you can get kits, you can get seeds, so why aren’t people doing it more in the spaces around where they live? It’s simply because they don’t have the time, the knowledge or the inclination to grow for themselves. So I thought well, let’s start offering this service where we provide this holistic offer, where we go and we’ll consult for you, we’ll come in and we’ll (once you sign it off!) install it for you, and then we’ll help you maintain it if you need us to.

In terms of USP, I think, no one else does that – from proposal to plate. You’ve got gardeners, you’ve got garden designers, no one really does agriculture in an urban environment and offers that service. From beginning to end.

In terms of beginner gardeners, what are the top five easy growing crops to start out with in terms of low maintenance?

French beans are really easy. Potatoes are a bulletproof veg that will last through even if you don’t water it or look after it. Tomatoes are quite easy to grow, herbs are easy, hardy herbs in particular. Strawberries are quite straightforward, as long as you keep the pests away. If you keep them in a raised bed or a pot, it’s much easier.

Whats your split between private and corporate projects. Is it mainly focussed on corporate?

I’d say from last year it’s 70/30 in favour of domestic installs. But corporate is a way we want to go because you’re bringing more people in to growing, bringing that message that ‘it’s easy to grow your own food’ to more people. And it’s more continual as well, because domestic jobs are a one off installation.

How much space do people need? Could you get involved with a windowsill?

You can easily grow herbs that you use on a regular basis on a windowsill – you need two window boxes, and you’re away. Even on a balcony, say a couple of meters, maybe three metres by one metre, you can grow quite a lot of stuff. You can use the vertical spaces to grow salads to go with your herbs, some easy cropping veg like spinach or chard or kale. You eat the leaves so you’re not waiting for root veg to grow. You can easily grow a nice, competent amount of stuff in that space. Easily.

Is it possible to have things growing year round, regardless of where it is growing?

In the winter months, not so much no. I think you’d need to be growing indoors. But once you plant your winter veg set in late October, you would then be able to start harvesting that from February/March, depending on what you’ve planted. Brussels sprouts you can harvest early in the year. You can quite easily bring this mentality indoors, grow salads on windowsills, and still have a constant amount of stuff.

Does growing your own food in a small space actually make a difference to the average customer? Is there much of a harvest?

I think it maybe doesn’t give them loads of produce. But say with salads, you can grow a box of salads, and get three goes at that. So you can just keep growing them and picking them until the plant becomes exhausted. It’s a pound to re-sow, and you’ll get a week’s supply of salads there, and they’ll be so fresh and so tasty. But beyond the amount that people acquire in terms of produce, they’re getting more self-confidence, they’re being able to look after themselves in that capacity, and it’s quite relaxing to be able to look after your own produce and nurture your own crops. So it’s relaxing, therapeutic, saves you a bit of cash, its fresher, it tastes nicer. You might not be getting a huge amount of produce every week – you might not be getting a veg box, possibly – but you get a much broader set of impacts on your wellbeing.

How does London compare to other European/global counterparts in terms of urban growing, people being involved in where their food comes from?

I think London’s had quite a few community farms, things like the Skip Farm in King’s Cross. People using small forgotten spaces that you can’t build on currently. And there’s a big community ethos – there are farmers’ markets starting up all over the country, in London there’s quite a prevalent number. Crystal Palace Market started up last year, and it’s going from strength to strength. So yeah, London does have this community vibe and is growing quite a lot.

There’s an edible bus stop as well in South London, the woman who set that up is becoming a bit of a star. Compare that to other cities – you’ve obviously got the City Line in New York, though I’m not sure how much veg they’ve got there and how much of it is visual. You’ve got the same sort of thing with a disused railway in Paris… I’ve walked down that, they’ve got things like globe artichokes. But it’s more visual, more perennials; they didn’t have much that you could actually eat. I don’t know too much about what they’re doing further abroad in Europe, but it seems the UK is pretty much a driving force.

What are the best websites and apps for growing tips?

RHS is an amazing resource. Urban Organic is where I tend to buy a lot of my seeds. They’ll also sell you seedlings. They’re a great, trustworthy resource as well, they’re not a seed company that’s just trying to sell you things, they are very transparent.

And finally, where do you see the company in five years?